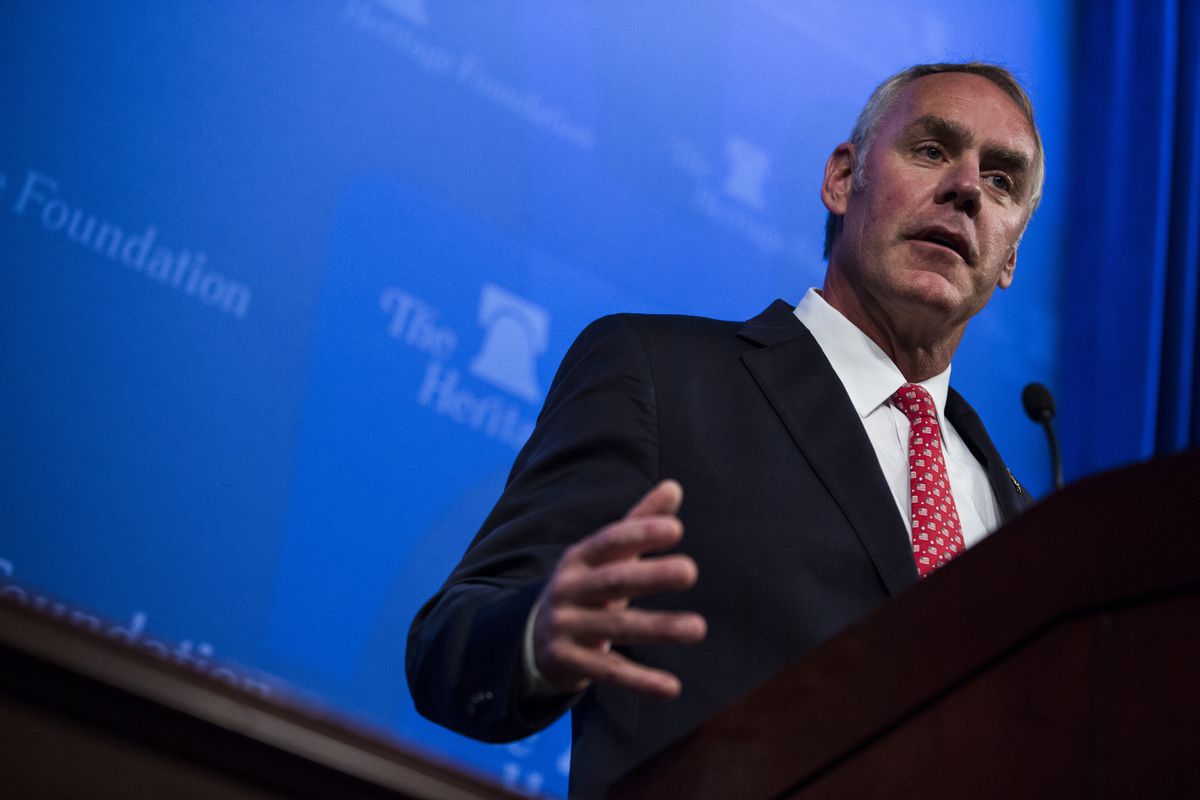 WASHINGTON - Interior Department Secretary Ryan Zinke submitted his resignation to the White House on Saturday, facing intense pressure from the White House amid multiple probes tied to his real estate dealings in Montana and conduct while in office.

"Secretary of the Interior @RyanZinke will be leaving the Administration at the end of the year after having served for a period of almost two years," the president tweeted, trailing off in a second sentence. "Ryan has accomplished much during his tenure and I want to thank him for his service to our Nation......."

Secretary of the Interior @RyanZinke will be leaving the Administration at the end of the year after having served for a period of almost two years. Ryan has accomplished much during his tenure and I want to thank him for his service to our Nation.......

Behind the scenes, however, the White House had been pushing Zinke to resign for weeks, administration officials said. Last month, these officials said, Zinke was told he had until the end of the year to exit or be fired.

Zinke - the first Montanan to serve in a presidential Cabinet - is the fourth Trump Cabinet member to resign under an ethics cloud in less than two years. Health and Human Services Secretary Tom Price, Veterans Affairs Secretary David Shulkin and Environmental Protection Agency Administrator Scott Pruitt also relinquished their posts after coming under scrutiny for how they spent taxpayer dollars on their travel, among other allegations.

For Zinke the key moment in his loss of support at the White House came in October when Interior's inspector general referred one of its inquiries to the Justice Department, according to two senior administration officials who spoke on condition of anonymity to discuss a sensitive matter.

That probe, which is still ongoing, is examining whether a land deal Zinke struck with the chairman of the oil services giant Halliburton in his hometown of Whitefish, Montana, constituted a conflict of interest.

As the leading advocate for Trump's push to expand domestic energy production, the former Navy SEAL and Montana congressman became a lightning rod for controversy. He was hailed by energy industry officials for relaxing Obama-era environmental rules and opening up wide swaths of federal land and federal waters for drilling. But environmental groups assailed his policies and conducted opposition research into his management practices and financial dealings.

While Zinke won confirmation by a comfortable 68-31 margin, views on him sharply divided along partisan lines as he promoted America's "energy dominance," a phrase he coined that Trump quickly adopted.

Senate Energy and Natural Resources Committee Chairman Lisa Murkowski, R-Alaska, who successfully lobbied the Trump administration to restart energy exploration in the Arctic National Wildlife Refuge, said in a statement that she "was disappointed to learn that Secretary Zinke is stepping down."

"He has been a strong partner for western states and for Alaska, in particular," Murkowski said. "After years of frustration with the Department, he came in and took a very different approach - he listened to us, built a great team, and worked with us to advance our priorities."

Several advocacy groups welcomed his departure Saturday, even as they pivoted to attack Deputy Secretary David Bernhardt, who will take over in the interim. Bernhardt, a skilled policy expert who has steered most of Interior's key policy decisions since joining the department in August 2017, is one of several Western Republicans under possible consideration for the job.

"Ryan Zinke will go down as the most anti-conservation Interior secretary in our nation's history," said Jennifer Rokala, executive director of the Center for Western Priorities. "Surrounding himself with former lobbyists, it quickly became clear that Ryan Zinke was a pawn for the oil and gas industry. We can expect more of the same from Acting Secretary David Bernhardt, but without the laughable Teddy Roosevelt comparisons."

Zinke styled himself as a Teddy Roosevelt Republican, showcasing his love of hunting, fishing and riding in the Montana wilderness.

Administration officials concluded weeks ago that Zinke was the Cabinet member most vulnerable to congressional investigations once Democrats took control of Congress in January. But a series of crises, including wildfires in the West and uncertainty over whether John Kelly would stay on as White House chief of staff, had afforded Zinke a temporary reprieve.

During his time in office Zinke came under at least 15 investigations, including inquiries into his connection to a real estate deal involving a company that Interior regulates; whether he bent government rules to allow his wife to ride in government vehicles; and allowing a security detail to travel with him on a vacation to Turkey at considerable cost.

Zinke was cleared in several of those investigations, and chose to attack his critics rather adopt a more chastened tone. Late last month he accused Rep. Raúl Grijalva, D-Ariz. - who had called on Zinke to step down and is poised to take over the committee that oversees Interior in January - a drunk.

"It's hard for him to think straight from the bottom of the bottle," Zinke wrote from his official Twitter account on Nov. 30. Grijalva, who in the past had acknowledged having a problem with alcohol but said it had been addressed, said the committee would not be distracted from examining Zinke's actions.

It is unclear whether the federal inquiries will continue, now that Zinke is leaving public office.

On Saturday, Grijalva said in a statement. "This is no kind of victory, but I'm hopeful that it is a genuine turning of the page."

"Secretary Zinke's successor has a chance to move on from on an unfortunate Trump administration record of environmental mismanagement and decline," he added. "A well-managed Interior Department - one that puts the public good ahead of fossil fuel and mining industry demands - can be a boon to the entire country."

While Zinke remained defiant both in public and private this month - one-and-a-half weeks ago, he boasted that he would continue to attack his critics - Trump had little personal affection for him. The president was annoyed by a few of Zinke's actions, including a decision in January to exempt Florida from offshore drilling in an appearance with Gov. Rick Scott, R, which was not approved in advance by the White House, and a ruling to allow imports of elephant trophies. Zinke later reversed the elephant trophy decision, after Trump publicly intervened.

The secretary's final public appearance was Thursday night at his Christmas party, which he told White House staffers he wanted to have before his dismissal. He invited lobbyists and conservative activists to his executive suite, where he posed for photos in front of a large stuffed polar bear wearing a Santa cap, according to an attendee.

Mounted animals on the wall were fitted with ornaments.

"He still has big-time political ambitions," said one Republican with close ties to Zinke, who asked for anonymity in order to speak frankly.

The jockeying has already begun to replace Zinke as secretary.

In addition to Bernhardt, outgoing Sen. Dean Heller, R-Nev., is a possible contender, according to Republicans who have been engaged in discussions with the administration in recent weeks. House Natural Resources Committee Chairman Rob Bishop, R-Utah, who will relinquish his gavel next month, is another candidate.

Zinke's resignation, which comes after Trump has replaced his attorney general and chief of staff, could be followed soon by other Cabinet departures. Both the positions of Homeland Security Kirstjen Nielsen and Commerce Secretary Wilbur Ross remain precarious, according to White House officials.

For the moment, Democrats like Senate Minority Leader Charles Schumer of New York were eager to crow about the latest departure.

"Ryan Zinke was one of the most toxic members of the cabinet in the way he treated our environment, our precious public lands, and the way he treated the government like it was his personal honey pot," Schumer said. "The swamp Cabinet will be a little less foul without him."

The Washington Post’s Lisa Rein contributed to this report.