Meteor swarm could be loaded with surprises in June 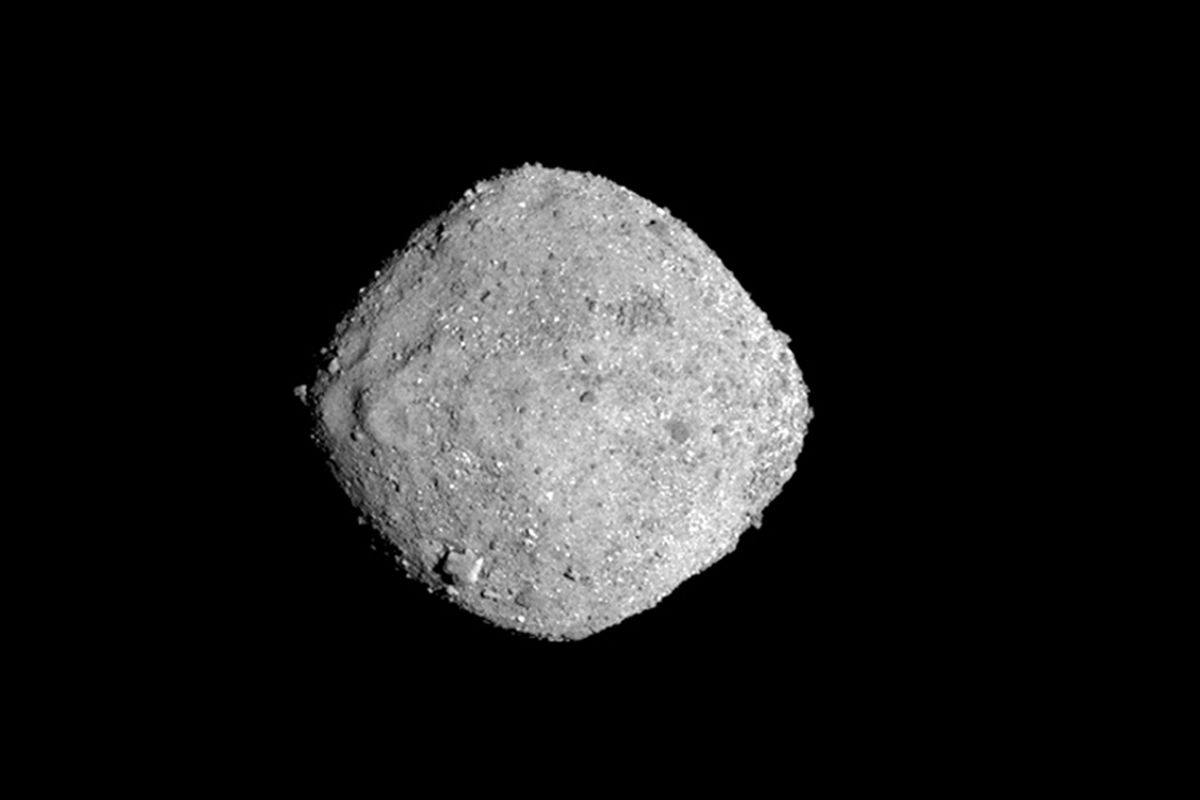 This Nov. 16, 2018, image provide by NASA shows the asteroid Bennu. After a two-year chase, a NASA spacecraft has arrived at the ancient asteroid Bennu, its first visitor in billions of years. The robotic explorer Osiris-Rex pulled within 12 miles (19 kilometers) of the diamond-shaped space rock Monday, Dec. 3. (NASA/Goddard/University of Arizona via AP)

This Nov. 16, 2018, image provide by NASA shows the asteroid Bennu. After a two-year chase, a NASA spacecraft has arrived at the ancient asteroid Bennu, its first visitor in billions of years. The robotic explorer Osiris-Rex pulled within 12 miles (19 kilometers) of the diamond-shaped space rock Monday, Dec. 3. (NASA/Goddard/University of Arizona via AP)

On June 30, 1908, an object the size of an apartment building came hurtling out of the sky and exploded in the atmosphere above Siberia. The Tunguska event, named for a river, flattened trees for 800 square miles. It occurred in one of the least-populated places in Asia, and no one was killed or injured. But the Tunguska airburst stands as the most powerful impact event in recorded human history, and it remains enigmatic, as scientists don’t know the origin of the object or whether it was an asteroid or a comet.

One hypothesis: It was a Beta Taurid.

The Taurids are meteor showers that occur twice a year, in late June and late October or early November. The June meteors are the Betas. They strike during the day, when sunlight washes out the "shooting stars" that are visible during the nighttime meteor shower later in the year.

A new calculation by Mark Boslough, a physicist at Los Alamos National Laboratory, shows that the tree-fall pattern in Siberia is consistent with an asteroid coming from the same area in the sky as the Taurid meteor swarm. Boslough and physicist Peter Brown of Western University in London, Ontario, gave a presentation at the American Geophysical Union fall meeting in Washington this month in which they called for a special observation campaign this June to search for Tunguska-class or larger objects embedded in the Taurids.

In some years, Earth passes near the densest cluster of material in the Taurid stream - and 2019 will be such a year. The scientists say it presents potentially the richest batch of incoming material since 1975, when seismometers left on the moon by Apollo astronauts recorded a spike in impacts during the Taurid swarm.

"If the Tunguska object was a member of a Beta Taurid stream . . . then the last week of June 2019 will be the next occasion with a high probability for Tunguska-like collisions or near misses," their AGU presentation stated.

"While we are not predicting another Tunguska airburst, an enhanced population of small NEOs [near-Earth objects] in the Beta Taurids would increase the probability of another such event on or near next year's Tunguska anniversary," they concluded.

To be clear, no one is saying that June should be declared National Wear a Helmet Month. Even if there is an "enhanced" number of Tunguska-class objects in the Taurid stream, the probability of one hitting Earth remains very low. Space rocks rarely come even as close as our moon.

Experts have a simple explanation for this: Space is big. It's so much easier to miss the Earth than to hit it. Of course, it can happen, and it did in 2013, when an object smaller than the Tunguska impactor slammed into the atmosphere in Russia near the city of Chelyabinsk, creating a fireball and a shock wave that shattered windows and injured more than 1,000 people.

In all of recorded human history, the number of people killed by asteroid impacts is zero.

"This is not something that should be keeping you up at night," Brown said.

Boslough and Brown do not know if there is, in fact, an "enhanced" population of relatively large asteroids lurking in the Beta Taurids. It's a conjecture.

Boslough puts the asteroid impact hazard in perspective: "It's one of those very low-probability but potentially high-consequence-type risks, which is hard to quantity and hard to talk about. The probability of a lot of people dying from an asteroid impact is super, super low, but it's not zero." He adds, "There are so many other hazards that are greater risk."

Astronomer Amy Mainzer, who hunts for asteroids at NASA's Jet Propulsion Laboratory and is principal investigator for the proposed Near-Earth Object Camera (NEOcam), an infrared space telescope that would scout Earth's orbit for potentially hazardous asteroids, said scientists have identified more than 90 percent of the objects large enough to cause a global-scale disaster.

But moving down the size scale, the census is far spottier. Only about 30 percent of medium-size objects - 140 meters (460 feet) in diameter or larger - have been spotted. And she said only about 1 percent of objects have been found that are the size of the Tunguska impactor, which was about 40 meters (130 feet) in diameter. She said she welcomed the idea of a special effort to look for objects during the Taurid swarm in June.

One other reassuring note: The large asteroids so far identified do not pose any significant threat to Earth, as far as anyone can discern.

"There are no objects in our catalogue that have any significant impact probability in the next 100 years," said Paul Chodas, manager of the Center for Near Earth Object Studies at the Jet Propulsion Laboratory. He noted that the asteroid Bennu - currently under scrutiny by NASA's Osiris-REx space probe - has a very small chance of hitting Earth a couple of hundred years from now. "That one we're going to keep an eye on," he said, but added, "There are no highly concerning asteroids."

The geometry of the Taurid stream is a bit tricky to visualize. Imagine it as a ring around the sun, a kind of miniature asteroid belt, with a highly elliptical shape, such that the orbit takes the material roughly as close to the sun as the first planet, Mercury, but also far beyond the Earth's orbit.

This ring of material is roughly but not exactly on the same plane as the Earth's orbit. That means the Earth crosses the Taurid stream twice a year. The June crossing intersects Taurid material traveling away from the sun, and the October crossing intersects material traveling toward the sun. That's why you can see the October Taurids as they hit the Earth's atmosphere. The June Taurids are washed out by sunshine but can be spotted by radar.

Boslough and Brown are suggesting that the secret to finding big objects among the Beta Taurids is to look in the other direction - into the night sky where the material would be streaking away from Earth. It wouldn't create shooting stars, of course - that's a phenomenon of meteors hitting the atmosphere - but any large objects could be seen with telescopes. As these big space rocks move away from Earth, they will be concentrated in a "vanishing point" geometry, a kind of "sweet spot" in the night sky, Boslough said.

If they’re there, that is.