‘Not a problem you can run away from’: Communities confront the threat of unregulated chemicals in drinking water 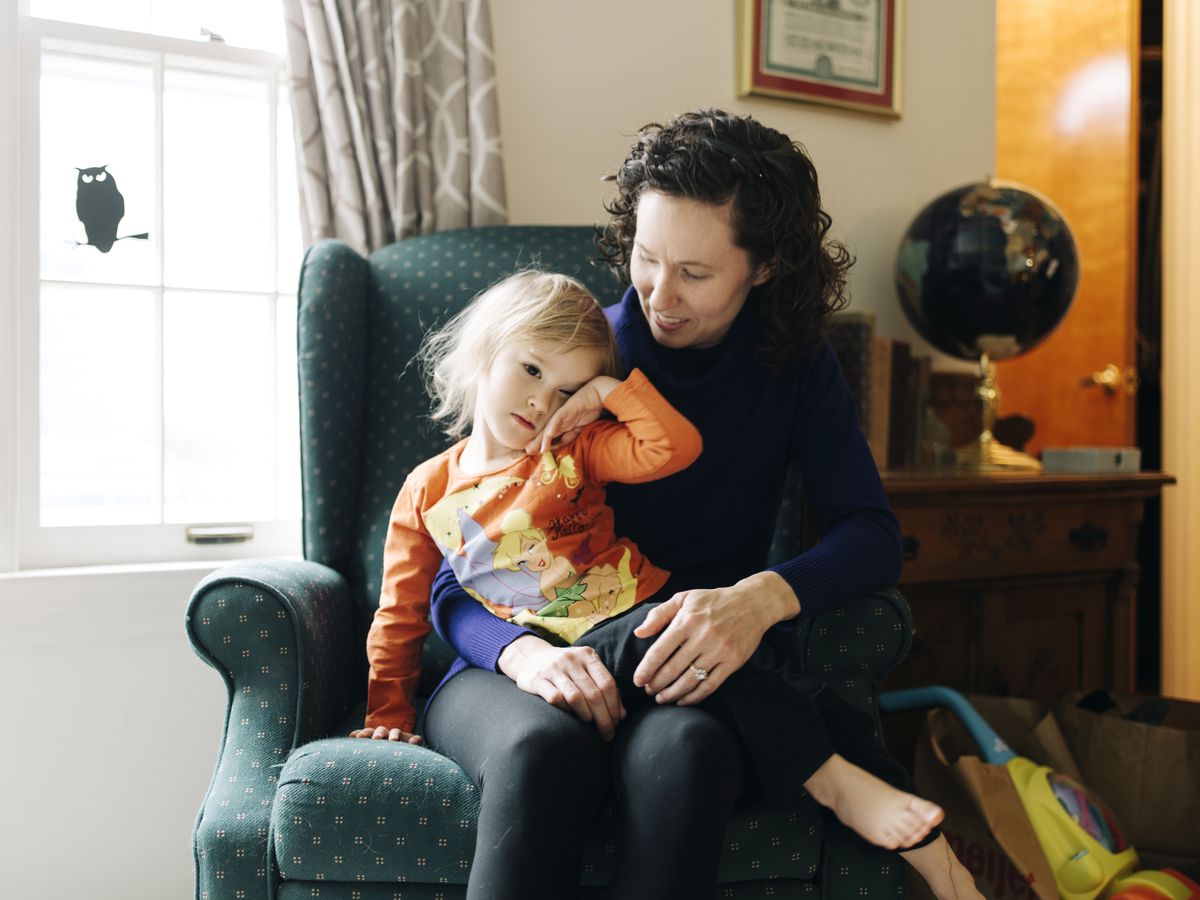 Tammy Cooper sits with her 3-year-old daughter, Jillian, at their Parchment, Mich., home. (Photo for The Washington Post by David Kasnic)

Tammy Cooper sits with her 3-year-old daughter, Jillian, at their Parchment, Mich., home. (Photo for The Washington Post by David Kasnic)

PARCHMENT, Mich. - The day this small town told its residents to stop drinking the water, Jennifer and Justin Koehler decided to sell their white clapboard house and move their two children elsewhere.

Sara and Matt Dean, who had relocated several years earlier from Chicago, started worrying about the health of their young son and the baby arriving soon.

And Tammy Cooper felt a welling indignation that would turn her into an activist - one who would travel to Washington to push for action on the unregulated chemicals contaminating her family's drinking water and that of millions of other Americans.

That late July day, this town along the banks of the Kalamazoo River became the latest community affected by a ubiquitous, unregulated class of compounds known as polyfluoroalkyl and perfluoroalkyl substances, or PFAS.

The man-made chemicals have long been used in a wide range of consumer products, including nonstick cookware, water-repellent fabrics and grease-resistant paper products, as well as in firefighting foams. But exposures have been associated with an array of health problems, among them thyroid disease, weakened immunity, infertility risks and certain cancers. The compounds do not break down in the environment.

In Parchment, where they were once used by a long-shuttered paper mill, tests found PFAS levels in the water system in excess of 1,500 parts per trillion - more than 20 times the Environmental Protection Agency’s recommended lifetime exposure limit of 70 parts per trillion.

Local officials promptly alerted residents. Michigan officials declared a state of emergency. Residents started picking up free cases of bottled water at the high school. Within weeks, the town abandoned the municipal wells that had served 3,000 people and began getting water from nearby Kalamazoo.

"This is not a problem you can run away from," Cooper said. "There are Parchments across the country."

Harvard University researchers say public drinking-water supplies serving more than 6 million Americans have tested for the chemicals at or above the EPA’s threshold - which many experts argue should be far lower to safeguard public health. The level is only an agency guideline; the federal government does not regulate PFAS.

The compounds' presence has rattled communities from Hoosick Falls, New York, to Tucson. They have been particularly prevalent on or near military bases, which have long used PFAS-laden foams in training exercises.

Both houses of Congress held hearings on the problem this year, and lawmakers introduced bills to compel the government to test for PFAS chemicals nationwide and to respond wherever water and soil polluted by them are found. In late November, the head of the EPA vowed that the agency would soon unveil a "national strategy" to address the situation.

"There are some very real human impacts from this stuff," said Erik Olson, a drinking-water expert for the Natural Resources Defense Council. "Most people have no idea they are being exposed."

Michigan is one of the few states where officials are trying to determine the extent of PFAS contamination. Health officials undertook statewide tests this year across 1,380 public water supplies and at more than 400 schools that operate their own wells.

"When we look for it, we tend to find it," said Eden Wells, the state's chief medical executive. Yet detection raises difficult questions, given the lack of regulation involving PFAS in water and the evolving research on its long-term health effects.

"Many of our responses are outstripping the scientific knowledge we need," Wells said.

More is known about two particular types of the chemicals, perfluorooctane sulfonate (PFOA) and perfluorooctanoic acid (PFOS), which companies phased out years ago amid growing evidence that both were ending up in the blood of nearly every American. But thousands of other PFAS chemicals remain in use - among the many threats, including arsenic and lead, to drinking water nationwide.

"From a policy perspective, what bothers me about all this is there are industries everywhere that don't really have to report what they are using," said Detlef Knappe, a North Carolina State University environmental engineer whose research helped identify another PFAS chemical, known as GenX, in Wilmington's drinking water supply. "As a class, there are so many compounds . . . and it pops up in the most unexpected places."

The Trump administration’s focus on the problem has been inconsistent.

Politico reported in May that the White House and EPA sought to block publication of a federal health study on the nationwide effects of PFAS contamination after one administration aide warned in an email that it could result in a "public relations nightmare." The study from the federal Agency for Toxic Substances and Disease Registry, which eventually was released, suggested that the EPA's existing, nonenforceable standard is inadequate to protect public health and should be much lower.

The same month, the EPA held a PFAS "summit" with industry representatives, public health groups, tribal leaders and officials from all levels of government. Then-administrator Scott Pruitt pledged action, saying, "There are concerns about these chemicals across the country because of their persistence, their durability, getting into the environment and impacting communities in an adverse way."

Little has happened since then, however.

At a hearing in early fall, Sen. Tom Carper, D-Del., pressed the EPA's director of groundwater and drinking water on when the agency might announce its plans to regulate the chemicals and finalize a drinking-water standard. Peter Grevatt, an agency veteran who recently retired, responded that officials were continuing to visit communities and develop a long-term "management plan." He acknowledged that it could take the agency a "number of years" to put enforceable regulations in place - if it determined that the contaminants were surfacing in enough water systems to be considered a nationwide health concern.

"Is it a national standard that requires all the nation's systems to sample on some regular basis and has the tools to get treatment in place?" Grevatt said. "Or is it something that we'll address more locally?"

Environmental attorney Robert Bilott successfully sued DuPont on behalf of plaintiffs exposed to PFOA in Ohio and West Virginia, and this year he filed a class-action lawsuit against 3M, DuPont, Chemours and several other companies on behalf of all Americans with PFAS chemicals in their blood. Some states have taken aggressive steps on their own, with New Jersey the first to regulate certain types of PFAS chemicals in its drinking water.

"It's a national issue that needs to be addressed in a national way," he said.

At least outwardly, a sense of normalcy has returned to Parchment.

Bottled water is no longer being handed out at the high school, though the town is still relying on water from Kalamazoo. Officials say their investigation is ongoing, with one likely culprit of the contamination being a local landfill once used by the now-closed paper mill.

Yet beneath the surface, many people continue to worry.

"In our minds, our water was safe," said Mayor Robert D. Britigan III, who noted that Parchment always had been in compliance with Michigan's drinking-water regulations. The city has since left the municipal water business. "We will never go back to those wells," he said.

On a sunny day this fall, customers lined up at the window of Twisters for the last ice cream cones of the season. The regulars sat in their usual spots inside Scooter D's, a popular diner off the main drag, where the waitresses call people "sweetheart" and the smell of hash browns hangs in the air.

"We lost a lot of business, primarily because of fear," said manager Carrie Klinger, whose father started the diner more than two decades ago. During the month-long water crisis, the family bought 80 pounds of bagged ice a day, made soups with bottled water and served canned sodas because the drink machine was hooked to a water line.

“It’s still not quite back to where it was,” Klinger said. “I still have customers who say they’ll never drink the water again.”

Echoes of that distrust linger on Glendale Avenue, where the Koehlers lived until moving away and where the Dean and Cooper families remain.

"It made me so scared, because our kids are so little. And it made me angry," Jennifer Koehler said.

Tammy Cooper and her husband David have wrestled with the same emotions. "What did this crisis do? It woke me up to what the government is and is not doing on many levels," she said.

For the Deans, their days remain a mix of anxiety, resignation and doubt.

"We relocated here thinking it would be a really great life decision," Sara Dean said as her 2-year-old son, Patrick, played on the floor. "You're supposed to hear about this somewhere else. This is the most average of average communities that there could be. It's 'Leave It To Beaver' average. If it can happen here, it can happen anywhere."

The family spent thousands of dollars to install a top-notch water filter. Still, they hesitate to wash their vegetables or cook with tap water. "It's just this giant question mark," Matt Dean said. "Are we responsible staying here?"

But they are staying, for now. On Oct. 17, Sara gave birth to a second son, Britt. The next day, the family brought him home to Parchment.