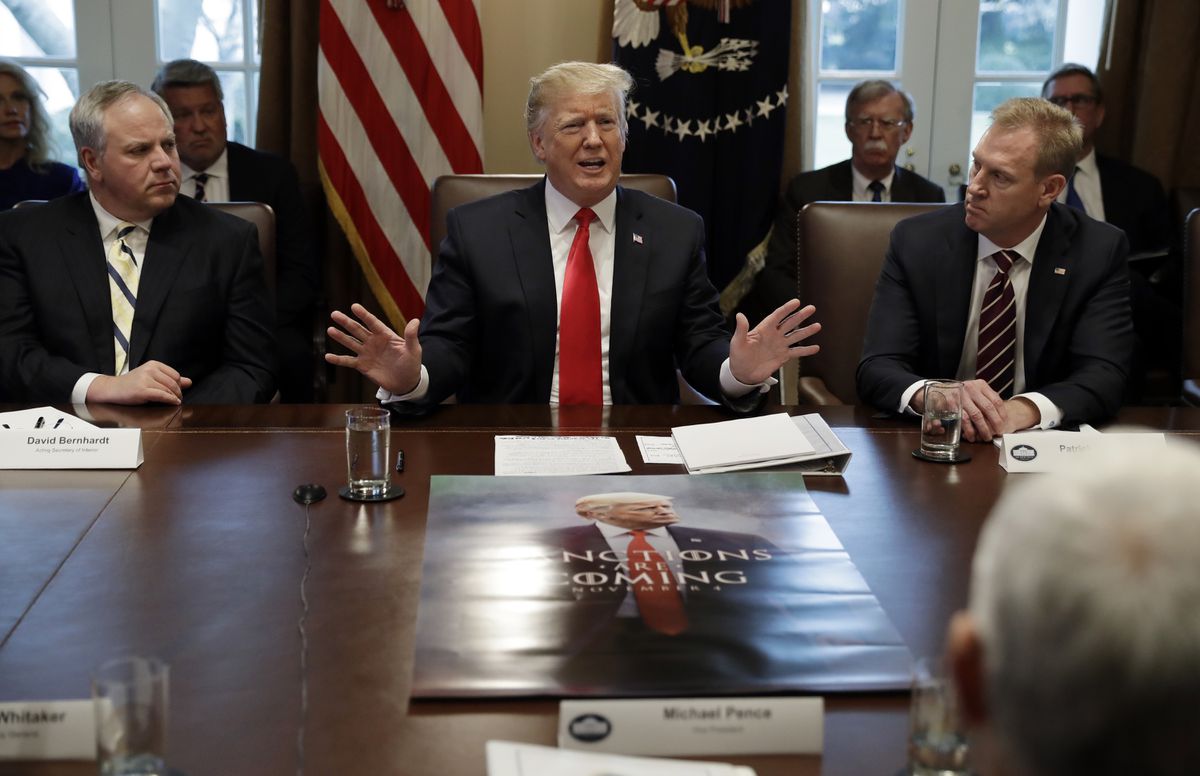 As Ryan Zinke left his post heading the Interior Department on Wednesday, the agency’s No. 2 official, David Bernhardt, joined President Donald Trump at a meeting of Cabinet officials.

Zinke, who announced his resignation under pressure in December, was not present at the meeting, and his Twitter profile description had been changed to “former secretary of the Interior” by midday. Zinke tweeted that it had been “a high honor to serve” Trump and the American people in the role.

"We've restored public lands for the benefit and enjoyment of the people, improved public access and shall never be held hostage again for our energy needs," Zinke said.

Bernhardt is set to continue that pro-energy posture as acting secretary, having already played a leading role shaping Interior Department policies to expand drilling, strip wildlife protections and alter the way the government analyzes the environmental consequences of projects. Bernhardt can continue much of that work without interruption while serving as acting interior secretary - a position he could fill for years under a federal vacancies law.

Bernhardt's time as acting secretary is initially limited to 210 days under that law. But that clock gets paused if Trump nominates someone for the secretary job - and it can stay that way for two years while a nomination is pending before the Senate.

As a natural resources lawyer, most of Bernhardt's professional life has been tied to the department - either working inside the agency or lobbying it from the outside. After a stint at Brownstein Hyatt Farber Schreck, Bernhardt went to work for former President George W. Bush's Interior Department in 2001, eventually becoming the agency's top lawyer in 2006.

When President Barack Obama took office in 2009, Bernhardt returned to his old firm, where he worked on behalf of oil companies and developers with business before his former agency. Bernhardt's client list included affiliates of Noble Energy, a major Gulf of Mexico oil producer; Equinor, the Norwegian company seeking to build a wind farm off the New York coast; and Halliburton, the world's largest oilfield services provider.

Unlike Zinke, a former Navy SEAL who rode a horse to the Interior Department's offices on his first day on the job and had a secretarial flag hoisted whenever he was inside the agency's headquarters, Bernhardt, 49, avoids the spotlight. His supporters and critics alike describe him as a smart, hard-working lawyer who strategically and methodically advances his goals, often finding ways to use the bureaucracy to his advantage.

Opponents call Bernhardt a "walking conflict of interest" and question whether his recusals from matters involving some former clients are sufficient.

Before he was confirmed to be deputy interior secretary, Bernhardt helped guide the Trump administration's transition at the department.

One of Bernhardt's top priorities at the agency has been revamping the way the U.S. protects vulnerable animals under the Endangered Species Act. Conservationists attacked a Trump proposal championed by Bernhardt to allow economic considerations to factor into wildlife protection decisions. Bernhardt has defended the approach, arguing that the government has too often pursued protections without regard for the potential cost to landowners and businesses.

With assistance from Bloomberg’s Toluse Olorunnipa.