‘It just doesn’t get any easier’: Oregon city mourns 3 crab fishermen who perished in high seas 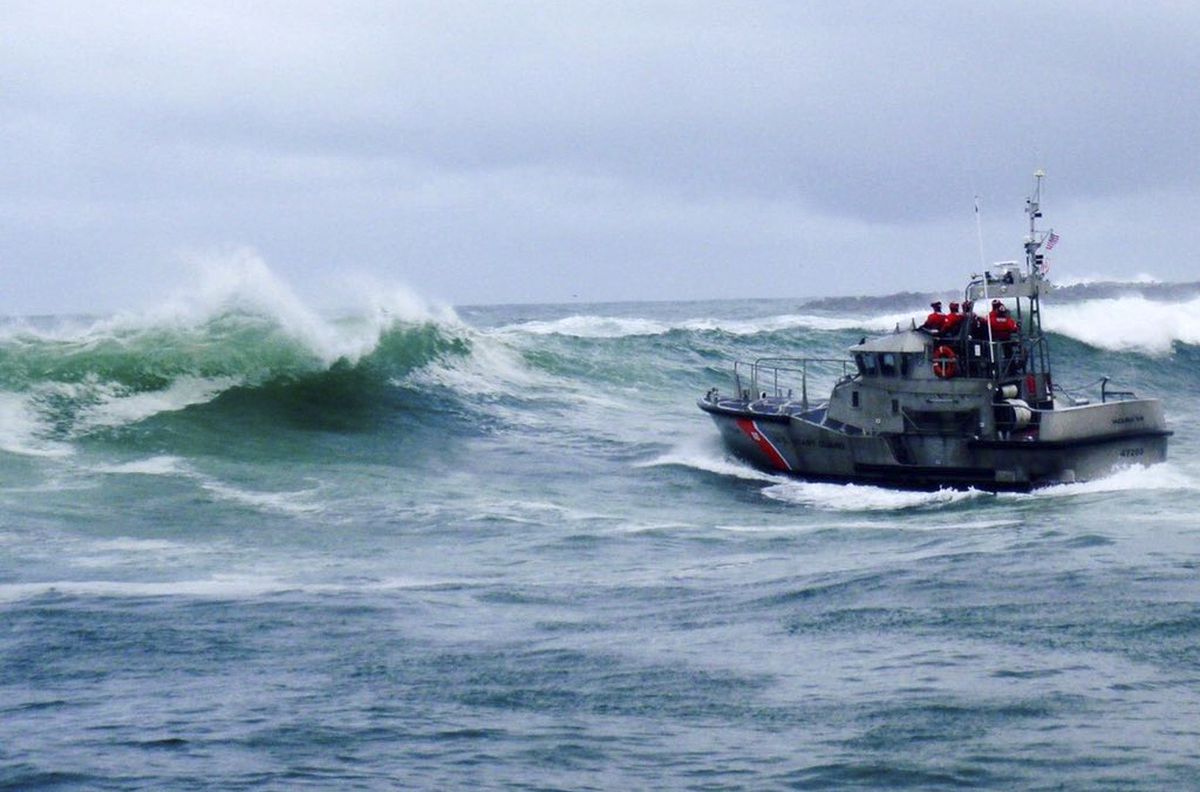 In this Tuesday, Jan. 8, 2019 photo, provided by the U.S. Coast Guard, a U.S. Coast Guard boat crew responds to three fishermen in the water after the commercial fishing vessel Mary B II capsized while crossing Yaquina Bay Bar off the coast of Newport, Ore. Authorities say three men were killed when their fishing boat capsized in rough waters off the Oregon coast. (U.S. Coast Guard via AP)

In this Tuesday, Jan. 8, 2019 photo, provided by the U.S. Coast Guard, a U.S. Coast Guard boat crew responds to three fishermen in the water after the commercial fishing vessel Mary B II capsized while crossing Yaquina Bay Bar off the coast of Newport, Ore. Authorities say three men were killed when their fishing boat capsized in rough waters off the Oregon coast. (U.S. Coast Guard via AP)

On Jan. 3, the day before Oregon’s Dungeness crab fishing season was set to start, conditions looked bleak. “Crabbers to sail into storm,” read a headline in the Newport News Times, which noted the marine forecast predicted 20-foot swells and gusts of up to 55 mph.

Among the commercial fishing boats leaving from Yaquina Bay in Newport, Oregon, was the Mary B II, a wooden 42-foot fishing vessel. Stephen Biernacki, 50, and James Lacey, 48, had recently decided to try their luck at catching Dungeness crab after fishing off the coast of New Jersey for years. Joining them on board was Joshua Porter, 50, an experienced fisherman known locally for helping countless addicts through recovery after getting sober himself more than a decade before.

None of them would make it home. At around 10 p.m. on Tuesday, the crew of the Mary B II were headed back to the docks when they reached the Yaquina Bay bar - the point at which at the Yaquina River meets the Pacific Ocean, creating massive, unpredictable swells that can easily overwhelm smaller vessels. That night, the U.S. Coast Guard measured 16-foot high waves near the bay's entrance.

These are the three fishermen who lost their lives when their boat capsized in Yaquina Bay late last night. Their families gave permission to share these. Captain Stephen Biernacki, Josh Porter and James (“Jimmy”) Lacey are very loved and will be missed very much. 💔@fox12oregon pic.twitter.com/eAjo2l1Ai4

A crew had been on its way to help escort the Mary B II across the bar, the Coast Guard said in a news release Wednesday. But before they could get there, the fishing boat abruptly capsized, tossing two of the men overboard into the frigid waves.

“They took about a 20-foot breaker over the bow,” Coast Guard Chief Warrant Officer Thomas Malloy told KOIN. “We lost total visibility of the vessel.”

The Coast Guard immediately launched off flares and began searching the darkened seas with lifeboats and a helicopter. But there were no survivors to be found. Lacey's body was located floating in the Pacific Ocean first, according to the Oregon State Police. Then, a little after midnight, the Newport Fire Department found Porter's body washed up on the beach. By Wednesday morning, the waves had pushed the crab boat aground, allowing the fire crew to go inside the cabin. They found Biernacki's body there.

Fishing for Dungeness crabs, which fetch premium prices at seafood markets, is one of the most dangerous jobs in the world. In addition to the long work hours and freezing temperatures, crab fishermen must contend with the harsh and unpredictable storms that relentlessly batter the coast of the Pacific Northwest in winter.

Commercial fishing has one of the highest fatality rates of any occupation, according to the National Institute for Occupational Safety and Health. A 2016 Oregon State University study analyzing Coast Guard data found that the fatality rate for Dungeness crab fishermen was even higher.

The extreme conditions were perhaps most famously highlighted in “Deadliest Catch: Dungeon Cove,” a 2016 reality show for the Discovery Channel that followed Yaquina Bay crab fishermen. (A slew of headlines initially claimed that the Mary B II had appeared on “Deadliest Catch,” but the network has said that neither the boat nor its crew were ever on the show.)

In Newport, a city of more than 10,000 where the economy is driven by commercial fishing, those risks are well-known. At Yaquina Bay State Park, a monument lists the names of local fisherman who have been lost at sea - more than 100 since 1900, many of whom were never found. Still, the news of the three deaths came as a shock.

"This stuff happens, but it just doesn't get any easier," Gary Ripka, a commercial fisherman based in Newport who was featured on "Deadliest Catch," told KEZI.

A friend of Porter’s, Celeste Paranto, told the Oregonian that he had intended the trip to be his last on the Mary B II. “He told friends that the crew was inexperienced,” she said. “Those were his words. It’s very sad. Because he was a responsible person he went out on the trip and never returned home.”

Another fisherman, Ian Wood, told KGW that he had been texting Porter as the storm got worse, asking why his boat wasn’t headed back in. “They shouldn’t have been out there,” he said.

But others in the seafaring community have argued that even a seasoned captain can easily run afoul of the hazardous conditions outside the Yaquina Bay. "A very good friend of mine had 40 years' experience, lost his life on the bar," Ripka told KATU. "It doesn't get easier when you get older doing it. It's just as dangerous and it's just as risky and it doesn't change."

Biernacki, the boat's skipper, had been a commercial fisherman for 35 years, his family said, and had ridden out numerous storms before.

“He was so happy to be out on the ocean,” Biernacki’s mother, Mary Anderson, told KPTV. “He loves the sea, and he told me that’s where he wants to be, in the sea. And the other thing he said to me so many times, he said, ‘Mom, if I die at sea, don’t have any remorse for me because I’m doing what I love.’”