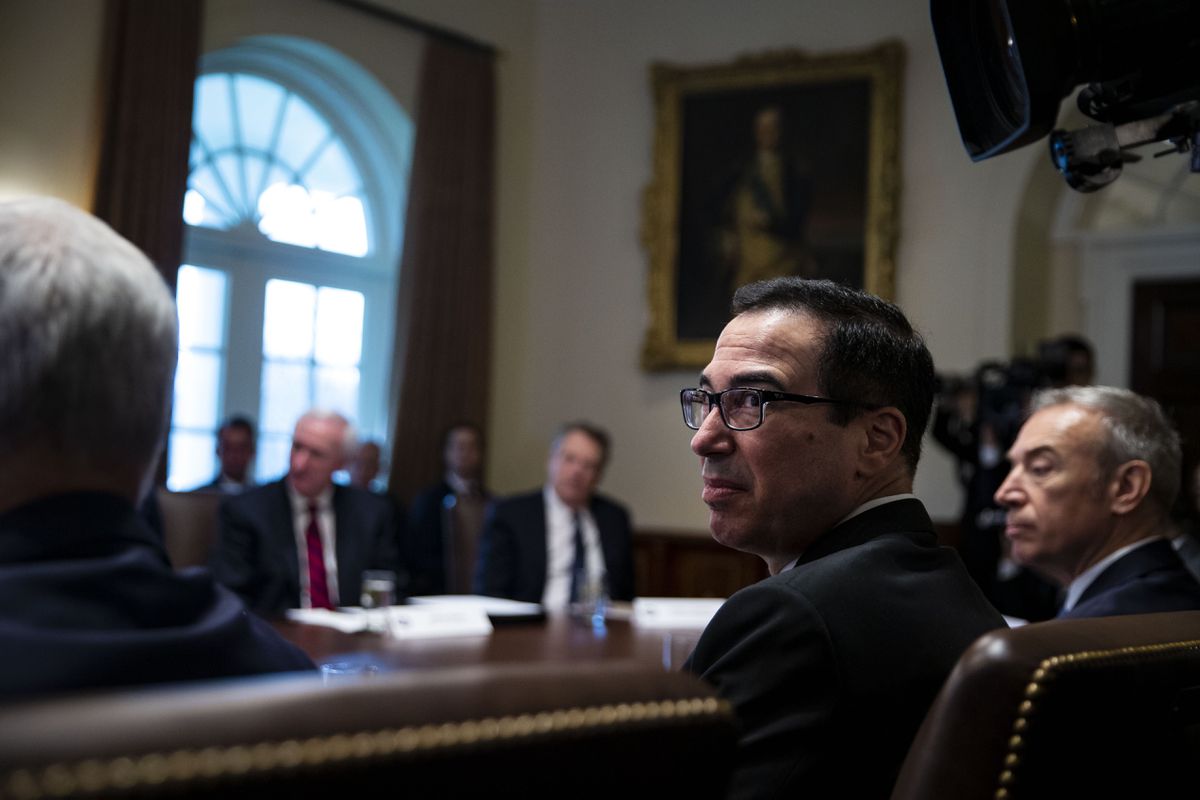 A top mortgage banking official appealed to a senior adviser to Treasury Secretary Steven Mnuchin, in foreground, for assistance in restarting an IRS program that assists the lending industry. Bloomberg photo by Al Drago

A top mortgage banking official appealed to a senior adviser to Treasury Secretary Steven Mnuchin, in foreground, for assistance in restarting an IRS program that assists the lending industry. Bloomberg photo by Al Drago

WASHINGTON - After an intense lobbying campaign by the mortgage industry, the Treasury Department this week restarted a program that had been sidelined by the partial government shutdown, allowing hundreds of Internal Revenue Service clerks to collect paychecks as they process forms vital to the lending industry.

The hasty intervention to restore the IRS' income verification service by drawing on revenue from fees - even as 800,000 federal employees across the country are going without their salaries - has intensified questions about the Trump administration's unorthodox efforts to bring certain government functions back online to contain the shutdown's impacts.

Critics, including many former IRS officials, described the move as an act of favoritism to ease the burden on a powerful industry.

"It seems crazy to me that a powerful bank or lobby gets to bring their people back to do their work," said Marvin Friedlander, who served as a senior IRS official in the mid-2000s. "How about the normal slob who can't even pay his rent?"

Administration officials said they are simply seeking to minimize the harm caused to the public by the budget standoff, which on Saturday will become the longest in modern U.S. history.

Because of the shutdown, the IRS was unable to process a key form that lenders use to confirm borrowers' incomes before they can grant home loans - a roadblock that threatened to bring the mortgage industry to a halt.

The IRS said it was able to restart the program by using fees paid by companies that provide the transcripts to lenders.

"We were advised by various parties that the shutdown of [the program] was creating significant issues for certain borrowers," the Treasury Department said in a statement. "We are pleased to help taxpayers by ensuring this service continues despite the lapse."

Craig Phillips, a counselor to Treasury Secretary Steven Mnuchin, was among the officials who heard the concerns of the mortgage industry directly, but he said in an email to The Washington Post, "This action was not taken to benefit the industry. It benefits the consumers that have made loan applications."

The IRS clerks, who are paid $13-$18 an hour, process 400,000 tax transcripts a week - helping potential home buyers verify their incomes and the $1.3 trillion mortgage banking industry earn millions of dollars in fees.

The effort to restart the processing of those transcripts came after direct appeals by the trade association that represents credit reporting companies and top mortgage industry officials. The lobbying was led by Robert Broeksmit, chief executive of the Mortgage Bankers Association, who took the matter to Phillips, Mnuchin's senior adviser.

"I said, 'Look, this is starting to be a problem for the lending industry,' " Broeksmit said. His group, one of the most influential trade associations in Washington, represents 2,300 mortgage companies, brokers, commercial banks and other financial institutions.

Broeksmit said he asked whether the IRS clerks could come back to work, saying: "Could you make these guys essential?"

The answer came the next day, Broeksmit said: The IRS employees would be called back to work.

After hearing concerns that the program had gone dark, top Treasury officials called senior officials at the White House Office and Management and Budget to consult on a solution, according to people familiar with the discussions.

On Monday, 400 furloughed IRS clerks in Fresno, California, Cincinnati, Kansas City, Missouri, and Ogden, Utah, were called back to work, according to employees and union officials.

"I'd like to take some credit," Broeksmit said, adding: "Our direct request got quite rapid results."

Unlike the vast majority of the 420,000 federal employees who have been required to work during the shutdown because they are essential to national security or public safety - among them airport screeners, food inspectors and Border Patrol agents - the IRS clerks are being paid, to their surprise.

Their salaries - normally funded by congressional appropriations - are being financed by industry user fees, an unorthodox strategy that the administration is also using to put some National Park Service employees back on the job.

"They're only allowed to keep open essential activities, and processing mortgage applications is valuable and appreciated, but do not rank with air traffic controllers," said Charles Tiefer, a former deputy general counsel in the U.S. House of Representatives. "The administration is playing fast and loose with the shutdown to prevent it from becoming unpopular with their own base."

Tiefer, a professor at the University of Baltimore School of Law, said he believed the Trump administration would lose a lawsuit on the issue if someone could find standing to bring a case, which he said was unlikely.

The Office of Management and Budget approved shifting the fees to the IRS's salary account because those funds are designated for a variety of agency operations, a senior administration official said.

In announcing the return of IRS employees who process the tax transcripts, the IRS also said it was restarting other fee-based services, including one that provides letters certifying residency for taxpayers in the United States.

"There's nothing unusual about it, because the account has this flexibility," said the official, who spoke on the condition of anonymity to describe internal discussions. "We are doing whatever we can, consistent with the law, to keep government programs running as long as possible under the lapse."

Some agreed, saying the IRS, unlike other federal agencies, has broad leeway.

"It appears that the IRS has quite a bit of legal flexibility to use money it raises from user fees," said Timothy Westmoreland, a professor at Georgetown Law who has studied federal budgets and legislation. "I can't say for sure, but it looks like there's legal ground for this."

Still, some former IRS officials called the workaround a handout to an influential interest group.

"How do you justify that?" said John Koskinen, who served as IRS commissioner from 2013 to 2017. "There are a lot of things that are inconvenient for people to have. It's about the law. You can't incur obligations or take actions unless you're protecting life or property."

In recent days, the Trump administration has sought ways to keep some government services going as the shutdown has dragged on, directing furloughed employees to extend food stamp benefits, provide flood insurance, maintain parks and reinstate other services that were prohibited during past shutdowns.

"Every time you turn the corner around here, they are finding another way to somehow appease their pressure points by finding these gimmicks," said William Hoagland, who was Republican staff director for the Senate Budget Committee during a shutdown in the 1990s.

Under federal law, the government is not allowed to spend money that has not been appropriated by Congress, and agencies are allowed to retain only employees who perform essential functions critical to public health or national security.

That means the IRS has been largely shuttered. The tax agency sent home about 90 percent of its workforce without pay. Call centers used by taxpayers across the country are closed. Audits have been halted, according to the agency's shutdown contingency plan. There's no training for thousands of employees to prepare for this year's tax filing season, which is expected to be particularly complicated as the new tax law fully takes effect.

This week, the administration announced it would bring back furloughed employees who process early tax refunds, but they are not being paid.

The IRS' contingency plan, which was updated in December, requires staffers in the income verification program to be furloughed in the event of a shutdown, as they were during a similar 2013 budget impasse.

One employee who was told to come in said the agency was bending the rules.

"I don't feel like this is a national security issue or falls into any of the guidelines of operating under a government shutdown," said the clerk, who spoke on the condition of anonymity out of fear of retaliation for speaking out.

"It's just wrong," the clerk added. "If the American people knew that a small group of people was getting paid just to benefit big corporations, I think they'd be pretty mad."

Shannon Ellis, president of Local 66 of the National Treasury Employees Union, which represents 4,300 IRS employees in Kansas City, said she was "happy our employees are getting paid," but noted "this one little area is the only area in the agency where it's happening."

Across the industry, there was relief that the transcripts were moving again.

Leonard Ryan, founder and president of the mortgage compliance firm QuestSoft, said his company would have had to lay employees off without a fix.

"We had a severe backlog - now it's down to two days," Ryan said. "It's kind of amazing what they've done to get back up. . . . They've figured a workaround - but that's what the mortgage industry does."

Broeksmit said he was hours into his Christmas week beach vacation when he began getting emails on his phone from members of his mortgage bank trade group nervous about the closing down of the tax transcript program.

Back in Washington, Broeksmit said, he took the matter up directly with someone he knows well at Treasury who serves as a senior adviser Mnuchin. He declined to name the official, but the Treasury Department confirmed it was Phillips, the liaison to the banking industry.

Boeksmit said Treasury officials were not aware that the IRS' closure was causing problems for mortgage lenders, in part because tax transcripts are now required far more often than before the recession.

Members of the Mortgage Bankers Association originate the vast majority of loans in the real estate financial market, valued last year at $1.6 trillion. The group spent $2.2 million on lobbying in 2018, according to lobbying records filed with the House Clerk's Office.

Broeksmit was not the only one in the industry to lobby the Trump administration to get the program restarted. Top Treasury and IRS officials also heard from the Consumer Data Industry Association, which represents credit reporting companies, according to one of the group's members.

"We are communicating with multiple federal agencies during the shutdown to make them aware of issues negatively impacting consumers and our customers," Jacob Hawkins, a spokesman for the credit rating agency Equifax, which buys transcripts from the IRS to provide to lenders, said in an email.

Rep. Gerald Connolly, D-Va., a member of the House Oversight Committee, said he is likely to seek an investigation into why the IRS restarted the tax-transcript program: "We now have government by carve-out, and the carve-outs are apparently determined by how powerful and influential you are."

The Washington Post’s Anu Narayanswamy and Damian Paletta contributed to this story.