No-shows among TSA screeners soar across the nation 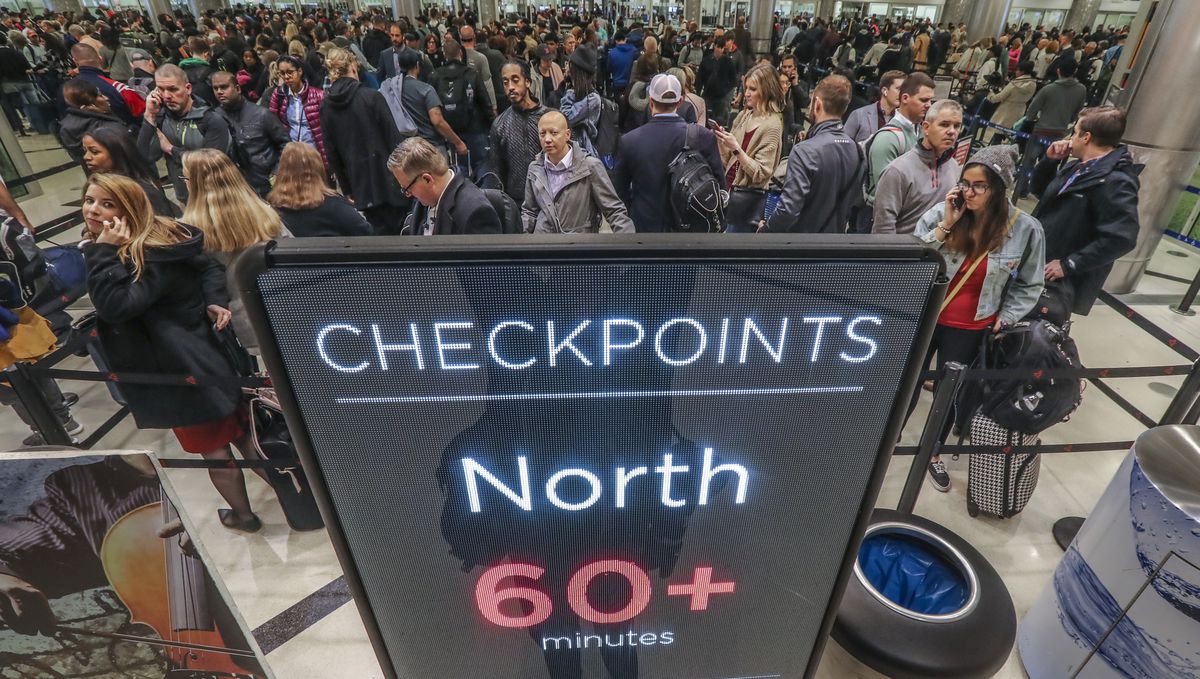 Security lines at Hartsfield-Jackson International Airport in Atlanta stretch more than an hour long amid the partial federal shutdown, causing some travelers to miss flights, Monday morning, Jan. 14, 2019. The long lines signaled staffing shortages at security checkpoints, as TSA officers have been working without pay since the federal shutdown began Dec. 22. (John Spink/Atlanta Journal-Constitution via AP)

Security lines at Hartsfield-Jackson International Airport in Atlanta stretch more than an hour long amid the partial federal shutdown, causing some travelers to miss flights, Monday morning, Jan. 14, 2019. The long lines signaled staffing shortages at security checkpoints, as TSA officers have been working without pay since the federal shutdown began Dec. 22. (John Spink/Atlanta Journal-Constitution via AP)

ATLANTA — Air travelers endured waits of more than an hour to get through domestic checkpoints at the world’s busiest airport in Atlanta on Monday, the first business day after security screeners missed paychecks for the first time due to partial government shutdown.

No-shows among screeners across the nation soared Sunday and again Monday, when the Transportation Security Administration reported a national absence rate of 7.6 percent, compared with 3.2 percent on the comparable Monday a year ago.

Hartsfield-Jackson Atlanta International Airport reported the long lines on its website Monday morning, showing the hour-plus waits at all three checkpoints in the domestic terminal.

"It's chaos out here," passenger Vincent Smith said as he stood in a line that snaked through the Atlanta airport's atrium and baggage claim areas. "This line, I've been here about 15 minutes and it has moved 2 feet."

TSA is working with the Atlanta airport and airlines "to maximize all available operational resources at the airport," TSA spokesman Jim Gregory said.

The agency is working with airports and airlines nationwide to consolidate operations and get the most out of resources, Gregory added. He declined to provide absentee figures for Atlanta or other airports, saying that would compromise security by exposing possible vulnerabilities.

"Screeners will not do anything to compromise or change their security procedures," he said.

But Smith said he could relate to government workers who don't show up so they can find other ways to make ends meet.

"If I was a government worker, yes, I would probably call in and try to do something else because creditors don't care if you're furloughed or not," Smith said. "They just want to get paid and with a family of six, you have to do what you have to."

Atlanta's wait times stretched well beyond what the TSA says most passengers have encountered since the shutdown began.

Delta Air Lines, the dominant carrier in Atlanta, and other airlines said they were advising passengers to get to the airport at least two hours before domestic flights and three hours before international trips. A Delta spokeswoman said airline employees were pitching in by helping manage TSA lines.

TSA said that it screened 1.97 million people on Sunday and that 99.1 percent waited less than 30 minutes, and 93.1 percent less than 15 minutes. Precheck lines for people who pay a fee for expedited screening averaged less than five minutes, TSA said.

A combination of a busy Monday travel day combined with some security lines being closed led to the long lines, airport spokesman Andrew Gobeil said. He said he didn't know how many security lines were down.

A statement from TSA attributed the long waits in Atlanta to "anticipated high volume."

Across the country, airports are making changes to deal with the shortage of screeners.

Miami International Airport closed one of its concourses for part of Saturday and Sunday, shifting about a dozen afternoon and evening flights each day to other concourses so that TSA workers could adequately staff the other checkpoints. Airport spokesman Greg Chin said TSA was staffing the Concourse G checkpoint on Monday, but airport officials were monitoring the situation and would make more adjustments if necessary.

Houston's George Bush Intercontinental Airport closed the security checkpoint and ticket counters in one terminal Sunday afternoon and they remained shuttered Monday morning, according to an airport spokesman.

The terminal handles United Express flights. Passengers were forced to go through checkpoints in other terminals to reach their planes. A spokesman for United Airlines said flights were not affected.

An official with the union representing TSA workers said TSA canceled employees' vacation requests about a week ago.

"Since nobody is getting paid, (TSA officials) don't want them to take annual leave," said Cairo D'Almeida, president of a government workers' union local in Seattle. He said he was asking local food banks if they can help the workers.

Gregory, the TSA spokesman said that was not a TSA decision. Under guidelines from the federal Office of Personnel Management, paid time off is canceled for employees, including the airport screeners, who are exempt from certain federal labor laws.

In Atlanta, Monday's long wait times come with less than three weeks remaining before the city hosts one of the world's biggest sporting events. Super Bowl 53 on Feb. 3 is expected to bring hordes of travelers to Atlanta for the game and days of concerts and related events.

"We're confident that we will be as efficient and as welcoming as people expect the city of Atlanta to be here at Hartsfield-Jackson for the Super Bowl," Gobeil said.

This story has been edited to clarify that flights are still using Houston airport terminal but checkpoint is closed.