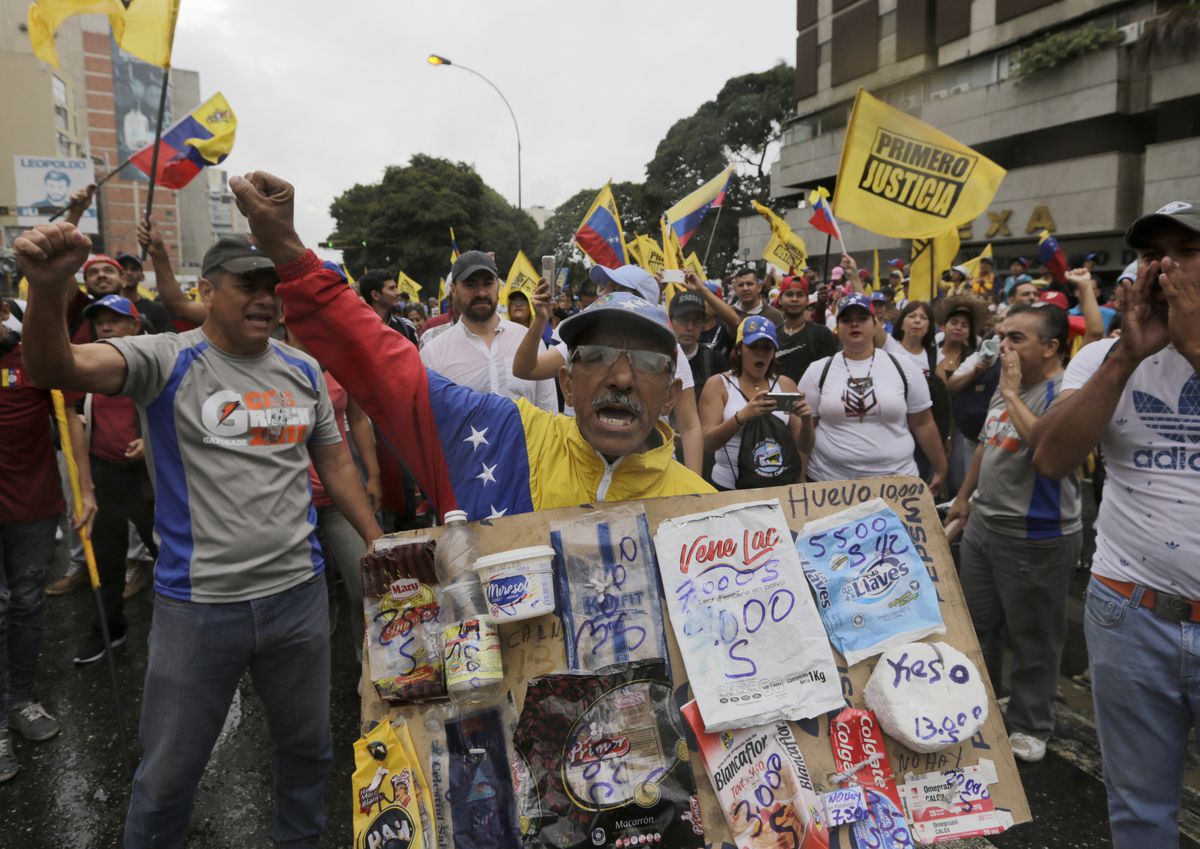 An opposition member holds a poster board with the prices of basic food during a protest against Venezuela's President Nicolas Maduro in Caracas, Venezuela, Wednesday, Jan. 23, 2019. Venezuela's re-invigorated opposition faces a crucial test Wednesday as it seeks to fill streets nationwide with protesters in an appeal to the military and the poor to shift loyalties that until recently looked solidly behind Maduro's government. (AP Photo/Fernando Llano)

An opposition member holds a poster board with the prices of basic food during a protest against Venezuela's President Nicolas Maduro in Caracas, Venezuela, Wednesday, Jan. 23, 2019. Venezuela's re-invigorated opposition faces a crucial test Wednesday as it seeks to fill streets nationwide with protesters in an appeal to the military and the poor to shift loyalties that until recently looked solidly behind Maduro's government. (AP Photo/Fernando Llano)

CARACAS, Venezuela — Venezuelan opposition leader Juan Guaido declared himself interim president in a defiant speech Wednesday before masses of anti-government demonstrators who took to the streets to demand President Nicolas Maduro’s removal — a bold move that was immediately recognized by the Trump administration and a growing number of other Western nations.

President Donald Trump called on Maduro to resign and said the U.S. would use the “full weight” of its economic and diplomatic power to push for the restoration of Venezuela’s democracy. Canada as well as Brazil, Colombia and several other Latin American nations followed suit in throwing their support behind Guaido.

"The people of Venezuela have courageously spoken out against Maduro and his regime and demanded freedom and the rule of law," Trump said in a statement.

Maduro responded by swiftly cutting off diplomatic relations with the United States, the biggest importer of Venezuelan oil, and said American diplomats had 72 hours to leave the country.

"Before the people and nations of the world, and as constitutional president. .... I've decided to break diplomatic and political relations with the imperialist U.S. government," Maduro told a crowd of red-shirted supporters gathered at the presidential palace. "Don't trust the gringos. They don't have friends or loyalties. They only have interests, guts and the ambition to take Venezuela's oil, gas and gold."

The bold challenge to Maduro's rule came just two weeks after Maduro's decision to ignore international opposition and take the presidential oath to a second six-year term widely considered illegitimate after his main opponents were banned from running against him.

Raising his right hand in union with tens of thousands of supporters, Guaido, the fresh-faced head of the opposition-controlled congress, took a symbolic oath to assume executive powers he says are his right under Venezuela's constitution and to take over as interim president until he calls new elections.

"Today, January 23, 2019, I swear to formally assume the powers of the national executive as president in charge of Venezuela," he told the cheering crowd as he stood behind a lectern emblazoned with Venezuela's national coat of arms

Guaido, 35, said he was taking the politically risky step just two weeks after Maduro took his own oath to a second six-year term because it was the only way to rescue Venezuela from "dictatorship" and restore constitutional order.

"We know that this will have consequences," he shouted, moments before quickly slipping away to an unknown location amid speculation he would soon be arrested. "To be able to achieve this task and to re-establish the constitution we need the agreement of all Venezuelans."

Guaido's declaration came as tens of thousands of anti-government demonstrators poured into the streets Wednesday accusing the embattled Maduro of usurping power and demanding he step down as the country reels from a crushing economic crisis that has forced millions to flee or go hungry.

Large crowds gathered in Caracas waving flags and chanting "Get out Maduro!" in what was the largest demonstration since a wave of unrest that left more than 120 dead in 2017. "Join us!" the protesters cried out to a line of officers wearing helmets and carrying shields. "You are also living this crisis!"

Pro-government demonstrators also marched in the capital, at times crossing paths with opposition protesters and shouting "sell outs" and "traitors." National guardsmen launched tear gas at anti-government protesters in the middle-class neighborhood of El Paraiso but for the most part the marches continued without conflict.

Wednesday's protest was considered a crucial test for the reinvigorated opposition as it seeks to send a forceful message that Maduro no longer has the people's backing and appeals to the military and the poor to shift loyalties that until recently looked solidly behind the president. The protests were called to coincide with an historic date for Venezuelans — the anniversary of the 1958 coup that overthrew military dictator Marcos Perez Jimenez.

Trump, Vice President Mike Pence and Secretary of State Mike Pompeo all issued statements proclaiming U.S. recognition of Guaido and saying the U.S. would take all diplomatic and economic measures necessary to support a transition to a new government.

The events on Wednesday followed a whirlwind week that saw an uprising by a tiny military unit put down by government forces, fires set during protests in poor neighborhoods and the brief detention by security forces of Guaido.

Guaido, who took the reins of leadership in the opposition-controlled Congress from a long list of better-known predecessors who have been exiled, outlawed or jailed, was dragged from an SUV just over a week ago by intelligence agents but was quickly released amid an international outcry.

Over the last two nights, Venezuelans angry over their country's spiraling hyperinflation, and food and medical shortages have gathered in the streets banging pots and pans and setting up barricades in protest. In the city of San Felix, residents set fire to a statue of Maduro's mentor and predecessor, the late Hugo Chavez.

For much of the past two years, following a deadly crackdown on the 2017 protests and the failure of negotiations ahead of last May's boycotted presidential election, the coalition of opposition parties has been badly divided over strategy and other differences as millions of desperate Venezuelans fled the country's hyperinflation and widespread food shortages. But buoyed by unprecedented international criticism of Maduro, anti-government forces have put aside their infighting and are projecting a united front.

In the run-up to Wednesday's protests, Guaido crisscrossed Caracas attending outdoor assemblies known as "open cobildos" — for the revolutionary citizen councils held against Spanish colonial rule — pumping up crowds by arguing that Maduro must go for democracy to be restored.

Guaido has been targeting his message to Venezuela's military, the traditional arbiter of political disputes.

Maduro, who lacks the military pedigree of his mentor, Chavez, has sought to shore up support from the armed forces by doling out key posts to top generals, including heading the PDVSA oil monopoly that is the source of virtually all of Venezuela's export earnings. He has also been playing commander in chief, appearing last week at a military command meeting wearing camouflage fatigues and receiving the blessing of the defense minister, Gen. Vladimir Padrino Lopez.

But beyond the public displays of loyalty from the top brass, a number of cracks have started to appear.

On Monday, Venezuelans awoke to news that a few dozen national guardsmen had taken captive a loyalist officer and seized a stockpile of assault rifles in a pre-dawn raid. The government quickly quelled the uprising, but residents in a nearby slum took to the streets to show their support for the mutineers by burning cars and throwing stones at security forces, who fired back with tear gas.

Disturbances continued into Tuesday, with small pockets of unrest in a few working-class neighborhoods where the government has traditionally enjoyed strong support.

Retired Maj. Gen. Cliver Alcala, a one-time aide to Chavez and now in exile, said the opposition's newfound momentum has reverberated with the military's lower ranks, many of whom are suffering the same hardships as regular Venezuelan families.

"I am absolutely certain that right now, especially younger troops are asking themselves whether Maduro is their commander in chief or a usurper," Alcala said.

Though intimidation has worked for the government in the past, it may not this time, said Dimitris Pantoulas, a Caracas-based political analyst. Discontent now appears to be more widespread and the ranks of security forces and government-allied groups have been thinned by the mass exodus of mostly young Venezuelans, he said.

"The government is resorting to its old tricks, but the people no longer believe them," Pantoulas said.