Theresa May gets parliamentary OK to reopen Brexit talks, but will EU negotiate? 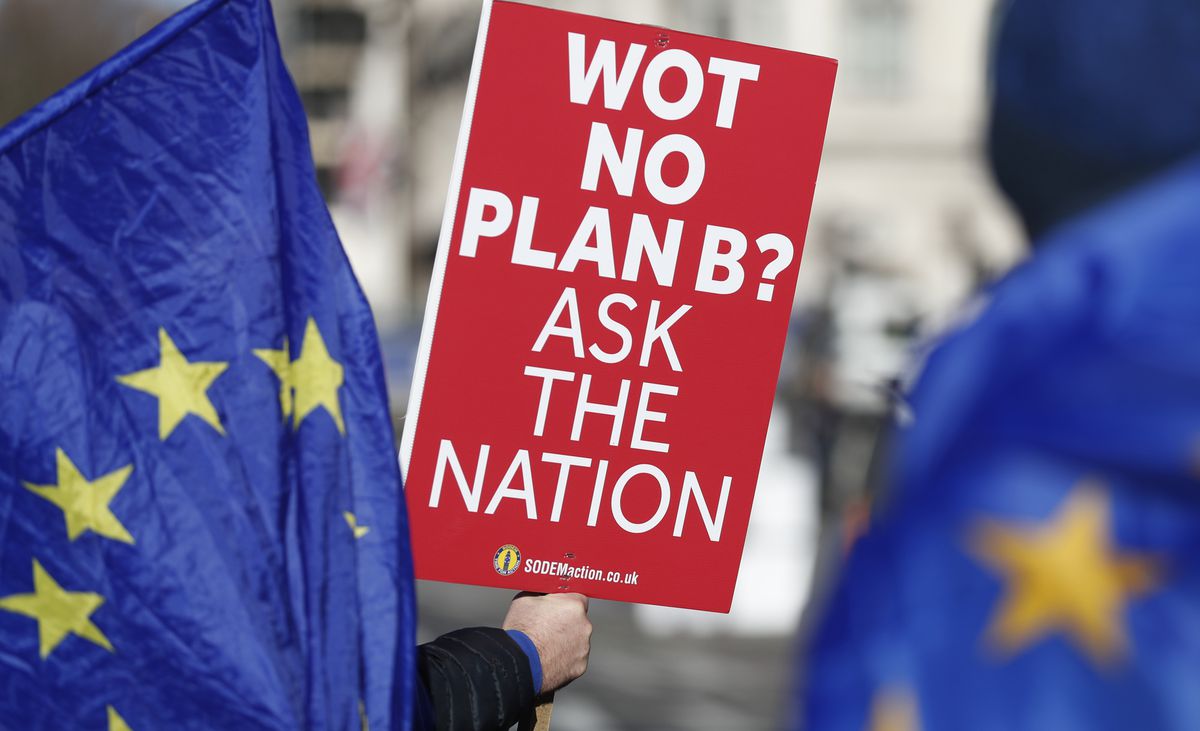 Anti Brexit protester Steve Bray who is almost permanently demonstrating outside the Houses of Parliament watches the traffic as he holds up placards in London, Monday, Jan. 28, 2019. (AP Photo/Alastair Grant)

Anti Brexit protester Steve Bray who is almost permanently demonstrating outside the Houses of Parliament watches the traffic as he holds up placards in London, Monday, Jan. 28, 2019. (AP Photo/Alastair Grant)

LONDON — British Prime Minister Theresa May on Tuesday won a few weeks to salvage a Brexit deal but headed toward a clash with the European Union by promising to overhaul the divorce agreement she spent a year and a half negotiating with the bloc.

Trying to break the Brexit deadlock, May got Parliament's backing for a bid to change an Irish border guarantee in the withdrawal deal — a provision May and the EU both approved, and which the bloc insists cannot be changed.

The Brexit process has grown increasingly surreal since Parliament rejected May's divorce deal two weeks ago, leaving Britain lurching toward a cliff-edge "no-deal" departure from the bloc on March 29.

A series of Commons votes Tuesday on next steps submitted by both pro-Brexit and pro-EU legislators ended up sending starkly mixed signals, as lawmakers backed a call to renegotiate the deal, and also approved a rival motion ruling out a no-deal exit.

Parliament's response to May's call to "send an emphatic message" to the EU is likely to leave the bloc even more confused about British aims.

May vowed after the votes that the government would "redouble its efforts to get a deal that the House can support."

But EU leaders have ruled out reopening the Brexit deal. The European Council said the current deal with the U.K. remains the "best and only way" for an orderly Brexit. French President Emmanuel Macron said the agreement — 585 pages of legally binding text — "is the best accord possible. It is not re-negotiable."

Parliament nonetheless backed, by 317 votes to 301 votes, a call for the border measure to be replaced by unspecified "alternative arrangements."

May acknowledged that the EU had "limited appetite" for changing the Brexit deal.

But she believes her agreement can still win Parliament's backing if it is tweaked to alleviate concerns about the Irish border measure, known as the backstop. The backstop would keep the U.K. in a customs union with the EU in order to remove the need for checks along the border between the U.K.'s Northern Ireland and EU member Ireland after Britain leaves the bloc.

The border is crucial to the divorce deal because it will be the only land frontier between the U.K. and the EU after Brexit, and because the free flow of people and goods underpins both the local economy and Northern Ireland's peace process.

Opposition to the backstop by pro-Brexit lawmakers — who fear it will trap Britain in regulatory lockstep with the EU — helped sink May's deal on Jan. 15, when Parliament rejected it in a 432 to 202 vote.

May backed a proposal from a Conservative lawmaker on Tuesday calling for the Irish backstop to be replaced. She said it was a chance to "tell Brussels that the current nature of the backstop is the key reason Parliament cannot support this deal."

She vowed to go to Brussels and seek "significant and legally binding change" to the backstop. May's office said that might include an end date to ensure it is temporary or an exit clause for Britain. Both those ideas have been repeatedly rejected by the EU.

"There can be no change to the backstop. It was negotiated over 18 months with the U.K. and by the U.K.," she said.

May's approach drew praise from "hard-Brexit"-backing lawmakers who have often opposed her. Conservative lawmaker Steve Baker, a member of euroskeptic faction the European Research Group, said the group had agreed to back the amendment "to see if the PM can land a deal that will work."

But the idea of renegotiating the deal was scorned by their pro-EU colleagues.

Green Party legislator Caroline Lucas accused May of chasing "heated-up fantasies that have already been rejected by the EU."

Lawmakers voted on seven Brexit proposals Tuesday, including the border change supported by May and several measures that seek to rule out a "no-deal" Brexit.

Much of the business world says a no-deal Brexit would cause economic chaos by eliminating existing EU trade agreements and imposing tariffs, customs checks and other barriers between the U.K. and the EU, its main export market.

"The delay and the drift and the chasing of unicorns means that we could end up with no-deal by accident," she said.

Most members of Parliament oppose leaving without a deal, but they rejected several proposals that tried to wrest control of the Brexit process from the government and give it to Parliament so that lawmakers can stop Britain crashing out of the EU without a deal. Some opposition Labour Party members sided with the government, worried about being seen as obstructing Brexit.

Lawmakers approved, by a narrow 318 votes to 310 votes, a motion ruling out a "no-deal" Brexit. It is not legally binding but has political force as an expression of the will of Parliaemt.

Tuesday's ambiguous votes won't mark the end of Britain's turmoil over Brexit: There could be a rerun in two weeks. May said if she has not struck a new Brexit deal by Feb. 13, Parliament would get to vote, again, on what should happen next.

EU leaders have repeatedly urged Britain to clarify what kind of Brexit it wants and are watching to see which proposals — if any — get the backing of the U.K. Parliament.

"This is not a Brussels day, this is a London day," said European Commission spokesman Margaritis Schinas. "(They) have the vote tonight and then we will take it from there."