Climate change will alter the color of the oceans, new research finds 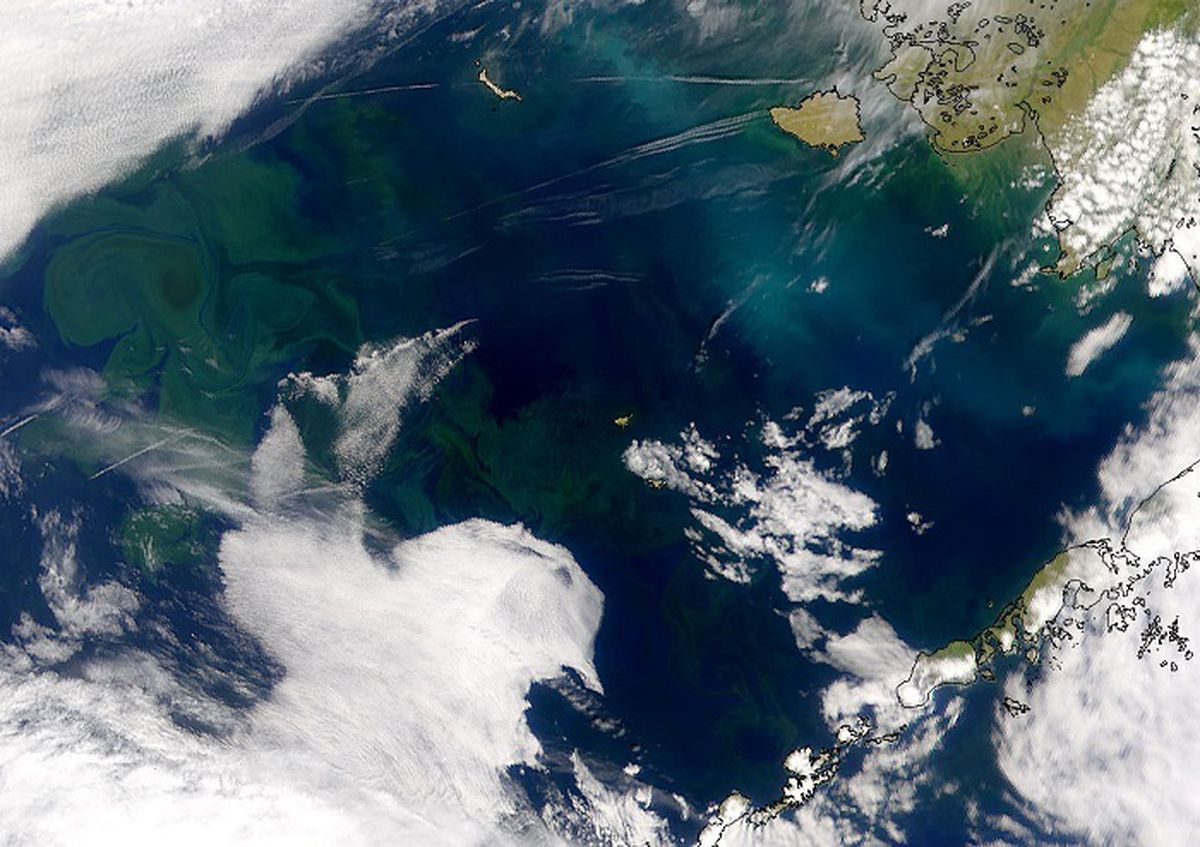 The Bering Strait between Siberia and Alaska features some of the world's most productive ocean waters. This Sea-viewing Wide Field-of-view Sensor (SeaWiFS) image from June 2000 shows phytoplankton covering vast stretches of water; green blooms of phytoplankton can be seen to the left. To the right, off the west coast of Alaska, a bloom of a specific type of phytoplankton, coccolithophores (with white calcium-rich shells), appears bright blue-green. (Courtesy SeaWiFS, NASA Earth Observatory)

The Bering Strait between Siberia and Alaska features some of the world's most productive ocean waters. This Sea-viewing Wide Field-of-view Sensor (SeaWiFS) image from June 2000 shows phytoplankton covering vast stretches of water; green blooms of phytoplankton can be seen to the left. To the right, off the west coast of Alaska, a bloom of a specific type of phytoplankton, coccolithophores (with white calcium-rich shells), appears bright blue-green. (Courtesy SeaWiFS, NASA Earth Observatory)

By the end of the century, if not sooner, the world’s oceans will be bluer and greener thanks to a warming climate, scientists reported Monday. And while the shift in color will be all but imperceptible to the human eye, it could hint at the profound changes in store for a wide array of marine life.

At the heart of the phenomenon lie tiny marine microorganisms called phytoplankton, which are crucial to ocean food webs and to the global cycling of carbon - and sensitive to the temperature of ocean waters. Because of the way light reflects off the organisms, blooms of these phytoplankton create colorful patterns at the ocean's surface. Climate change will fuel the blooming of some phytoplankton in some areas, while reducing it in other spots, leading to subtle changes in the ocean's appearance.

Ocean color varies from green to blue, depending on the type and concentration of phytoplankton, or algae, in any given area. A deep blue ocean typically means there is little phytoplankton present. The more phytoplankton present, the more green the water appears. According to NASA, when sunlight hits the ocean, some of the light is reflected back directly, but most of it penetrates the ocean surface and interacts with the water molecules it encounters. By keeping a close watch on ocean colors, scientists can better understand phytoplankton and how they impact the world around them.

"Color is going to be one of the early signals," said Stephanie Dutkiewicz, a principal research scientist in MIT's Center for Global Change Science and a co-author of Monday's study in Nature Communications. "We're going to be able to see - not by eye but by instrument - that the color of the ocean is changed."

Phytoplankton live at the ocean surface, where they use sunlight and carbon dioxide to engage in photosynthesis. They pull carbon into the ocean while giving off oxygen. When these organisms die, they bury carbon in the deep ocean, a crucial process that helps to regulate the global climate.

But phytoplankton are vulnerable to the ocean's current warming trend. According to NASA, warming changes key properties of the ocean and can affect phytoplankton growth, since they need not only sunlight and carbon dioxide to thrive, but also nutrients. As the agency explains, "productivity is expected to drop because as the surface waters warm, the water column becomes increasingly stratified; there is less vertical mixing to recycle nutrients from deep waters back to the surface."

Dutkiewicz said various scientific models suggest that there is likely to be a decrease in the overall amount of phytoplankton in the oceans over time. But she said that it could be decades before scientists can begin to document precisely the role climate change plays in that evolution.

In the interim, Dutkiewicz said, paying close attention to changes in the oceans' color can offer the first clues of the changes that are underway.

Dutkiewicz and her team built a climate model that projects changes to the oceans, including their optical properties, throughout the century. And in a world that warms by 3 degrees Celsius (5.4 degrees Fahrenheit), it found that multiple changes to the color of the oceans would occur. The model projects that currently blue areas with little phytoplankton could become even bluer. But in some waters, such as those of the Arctic, a warming will make conditions more ripe for phytoplankton, and these areas will turn more green.

The world has already warmed more than 1 degree Celsius (1.8 degrees Fahrenheit) since the 19th century, and at the current pace, scientists predict, warming could accelerate in coming decades if nations don't take serious steps to cut carbon dioxide emissions. A United Nations-backed panel of scientists said last year that it will require "unprecedented" action over the coming decade for the world to limit warming and stave off the most catastrophic consequences of climate change.

For years, the government has maintained satellites that monitor the kind of light, or radiance, that is coming from the Earth's surface. Dutkiewicz said those instruments will probably provide early signals of how climate change is altering the oceans and their color.

And why does that matter?

Phytoplankton are the base of the food web, Dutkiewicz said, and they are extremely diverse. If certain kinds begin to vanish from the ocean, she said, "it will change the type of fish that will be able to survive." Those kinds of changes could reverberate up the food chain.

"Changes in community structure at the base of the marine food web may be the best marker of larger ecosystem shifts which could influence fisheries and carbon cycling," said Sonya Dyhrman, an expert on phytoplankton at the Lamont-Doherty Earth Observatory of Columbia University, who was not involved in the research released Monday.

"This finding reinforces the importance of long-term monitoring of phytoplankton community composition," she added.

Whatever color changes the ocean experiences in coming decades will probably be too gradual and subtle for most people to notice. But in the scientific world, they could mean significant shifts.

“Changes are happening because of climate change,” Dutkiewicz said. “It’ll be a while before we can statistically show that. But the change in the color of the ocean will be one of early warning signals that we really have changed our planet.”