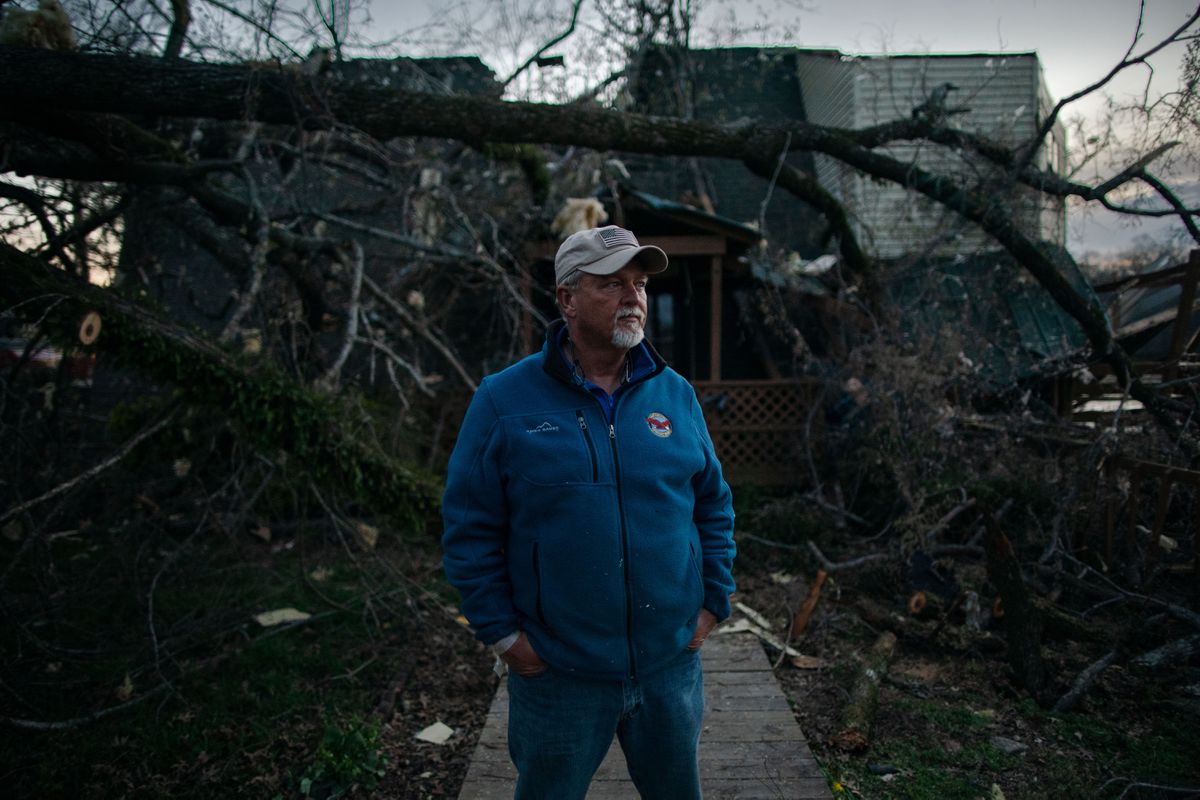 Troy Hardy stands outside his home March 4, 2019 in Smiths Station, Alabama. He was inside with his Susie and 4-year-old grandson when the tornado struck the day before. (Photo for The Washington Post by Kevin D. Liles)

Troy Hardy stands outside his home March 4, 2019 in Smiths Station, Alabama. He was inside with his Susie and 4-year-old grandson when the tornado struck the day before. (Photo for The Washington Post by Kevin D. Liles)

SMITHS STATION, Ala. - The moment Troy Hardy heard the sound of the wind - loud and low as a locomotive, and a thousand times more ferocious - he knew what was coming, and he knew it was going to be bad.

The Sunday afternoon turned suddenly dark, and Troy ran indoors. "Susie!" He yelled to his wife to grab their grandson, who had been napping in the spare bedroom. "Susie! Susie!"

Lightning crackled and storm sirens wailed, and the wind that whipped down the narrow hallway was so powerful he could barely stay on his feet. A door was ripped from its hinges and went flying into him, bloodying his wrist. Troy bent into the wind, forcing himself forward. And though he knew she couldn't hear him, he kept yelling his wife's name over and over again.

Finally he reached the bedroom. Susie was sprawled across 4-year-old Wyatt Savage's tiny body on the floor. He flung himself atop his family and pulled a heavy mattress over them all. And then the tornado was upon them.

“It’s hard to explain, or even really talk about,” he said a day later, standing amid the wreckage of the lakeside house that was once his home. An old oak tree lay across the roof, splitting it in two. The deck where he used to drink coffee and watch the sunset was gone. The walls of his bedroom were totally blown away, the bed he’d shared with his wife for 17 years exposed to the water and the wind.

"It was everything we had," Troy said. He shifted, and shattered glass crunched under his feet. "But all of it is replaceable."

He knew that elsewhere in central Lee County, about 100 miles southwest of Atlanta, at least 23 people had been killed by the powerful tornadoes that swept through on Sunday. It was the deadliest such event in the United States since 2013.

"My wife, my grandson, they're not replaceable," said Troy, 55. "Nothing matters more than life."

Susie, 54, couldn’t remember how long they lay like that, with the storm raging and the house shaking around them. Terror stretched each second into an eternity.

When the winds finally eased, they crawled out from under the mattress and found "Armageddon," Susie said. Glass was everywhere. Toppled and broken pieces of furniture were flung across the living room. A chunk of roofing had fallen in front of the door, blocking their only exit.

She called her daughter, Mallory Savage, 26, who had been at a church luncheon with their other grandson.

"You have to get out," Mallory said.

The sirens were still going off. Thunder boomed. Another tornado could come at any moment. They pushed against the front door until it finally opened and tumbled out into the rain, then rushed into a cargo trailer in the yard. Cold and wet, they huddled together as the wind rocked the trailer. Susie called Mallory again. “I’m coming,” her daughter promised.

They comforted one another on the phone until Mallory's battery died.

The younger woman was only a few miles away, but it might as well have another state. Fallen trees cluttered the roads and the wind whipped pine needles everywhere. She and a friend from church drove until they encountered a massive downed power line.

Mallory got out of the car and took off her wedge-heeled shoes. She had to get her son.

She walked for three hours, barefoot, listening to shivers and cracks of wind-battered trees, praying that none of them would fall.

At last she heard Wyatt's voice, sweet and loud, like he always was.

"Wyatt!" she yelled. And then she was in the trailer, holding him, speechless with relief.

Her 4-year-old in tow, Mallory trekked back into town, where they stayed with a friend. Troy and Susie spent the night in their Jeep.

When they woke the next morning, "I felt like I was a walking zombie," Troy said. It seemed as though he was watching a movie or the evening news - something out of someone else's life. But all this devastation belonged to him.

Soon Mallory and the couple's other children arrived with clean clothes and food. Neighbors stopped by to check on them and help clear debris. A group of cheerleaders from the local high school drove up and helped Susie dig all her old photographs out of the wreckage. At least these memories wouldn't be ruined.

An insurance adjuster came to look at the house and declared it a total loss.

When it all threatened to overwhelm him, Troy volunteered to go into town to buy fuel for the bonfire in which they were burning downed trees.

The hillside was loud with the sound of chain saws and smelled powerfully of smoke. The whole neighborhood looked like a war zone, as bad as anything he'd seen during his years as a staff sergeant in the Army. "But worse," Troy said, "because your family is involved."

But by the end of the day, he'd formulated a plan. They'd take the next three days to finish cutting trees. Then they'd get portable storage units for whatever they could salvage from their home's remaining rooms. The insurance company would pay for them to stay in a short-term rental while they demolished the house and rebuilt.

He and Susie took turns reassuring each other.

"She's my partner," he said. "Something like last night happens, you realize how close you are to losing somebody -" He trailed off. "I don't know. You get emotional."

As evening fell Monday, the family members sat on stumps around the fire in the yard, talking softly. Troy held his younger grandson, 2-year-old Eli, on his hip. His white German Shepard, Scout, shoved her nose into people's palms, begging to be petted.

Wyatt tossed sticks into the fire.

"The tree fell on the house," he said.

"Were you in the house?" Troy asked.

Wyatt tried to run off in search of more sticks, but Troy called him back. It was getting dark, and with the electricity out, the shadows swiftly engulfed the wrecked yard and ruined house. Soon all they could see were one another in the fire’s flickering light.