What Mueller’s investigation has already revealed 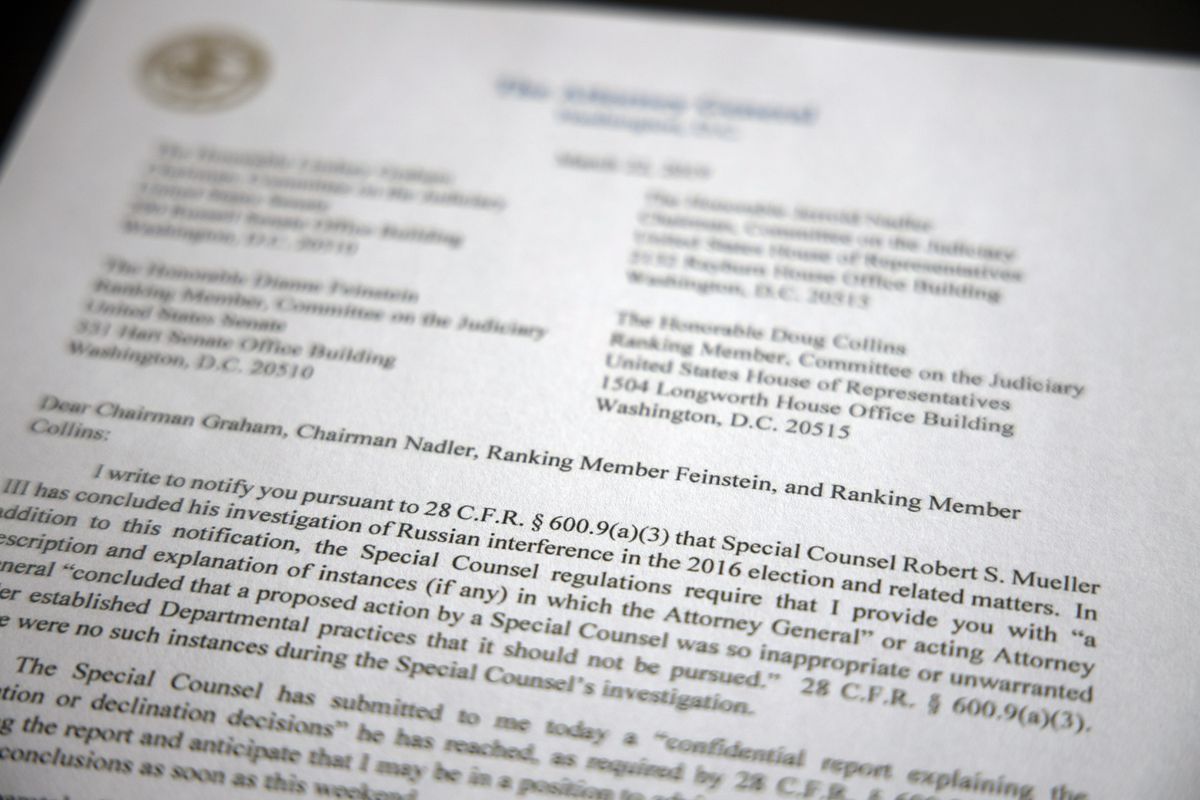 WASHINGTON - He pulled back the curtain on a sophisticated Kremlin hacking operation - identifying by name the 12 Russian military officers who he said sought to sway a U.S. election.

And he revealed how those closest to President Donald Trump defrauded banks, cheated on their taxes and, time and time again, lied to deflect inquiries into their ties with Russia.

Barr said in a letter to lawmakers that he may be able to inform Congress of Mueller's "principal conclusions" as early as this weekend.

It's not clear whether or when Mueller's full report will become public - or how his conclusions might impact Trump's presidency.

Barr said he plans to consult with Mueller and Deputy Attorney General Rod Rosenstein to determine "what other information from the report" could be made public.

But through legal documents and court hearings, Mueller has already revealed rich details about the Russian attack on the U.S. democracy in 2016 - and his investigation has triggered unpredictable ripple effects.

The special counsel indirectly helped expose hush money that Trump's lawyer paid an adult-film actress, shed new light on secret foreign-backed lobbying efforts and helped force a reckoning at major technology companies over how social media can be used to divide and inflame.

Mueller's investigation also severed the bonds between Trump and some of his most loyal confidants, brought down a national security adviser and spawned spinoff criminal probes that appear likely to live on even after the special counsel's office disbands.

"He's almost like a venture capital incubator who has spun out multiple lines of business," said David Kris, a former Justice Department national security division chief and founder of the consulting firm Culper Partners. "He's shown us an awful lot, and yet I think there's an awful lot more to come."

The special counsel team worked amid an unrelenting onslaught of insults and attacks from the president and his party - ensuring that its findings will probably be viewed through the lens of tribal partisan politics.

While polling has found that more Americans are likely to trust Mueller than Trump, those views break down sharply on partisan lines.

"I think the question of whether you assess it as a success or a failure," Kris said, "is probably really just holding up a mirror to your own expectations, hopes and dreams."

From the start of his investigation, Mueller and his team followed a consistent pattern. They would toil in silence for months, saying nothing about what leads they were exploring. Then - often on a Friday - they would reveal indictments packed with more detail than needed to substantiate the charges, though perhaps less than an insatiable public might have preferred.

Mueller struck first at the heart of Trump's campaign - charging its former chairman, Paul Manafort, and deputy campaign chairman, Rick Gates, with crimes related to their work for a pro-Russian candidate in Ukraine.

The infractions Mueller alleged were not related to possible coordination with Russia, a fact Trump and his allies were quick to seize on. But the October 2017 indictment sent a message: Mueller was alleging that the president's campaign had been led by people who had engaged in serious criminal wrongdoing.

Mueller also revealed that another campaign adviser, George Papadopoulos, had secretly pleaded guilty earlier that month to lying to the FBI about his contacts with foreigners claiming to have high-level Russian connections.

He was one of at least 14 Trump associates who had contact with Russian nationals during the campaign and transition.

Papadopoulos's plea agreement described his extensive efforts to try to arrange a meeting between Russians and the Trump campaign. And he said that in April 2016, a London-based professor claiming to have Russian connections confided that he had "dirt" on Hillary Clinton, including "thousands of emails."

That same month, Mueller would later allege, Russian hackers had accessed the networks of the Democratic Congressional Campaign Committee and the Democratic National Committee.

The plea deal previewed what Mueller would show over and over: Those surrounding the president sought to hide or downplay their dealings with Russia.

One of the persistent mysteries has been why.

In December 2017, former national security adviser Michael Flynn admitted that he lied to the FBI about his conversations with Russian Ambassador Sergey Kislyak. Flynn had claimed the two did not discuss Obama-era sanctions directed at the Kremlin, when in fact they had.

Nearly a year later, Trump's former personal lawyer Michael Cohen similarly pleaded guilty to lying to Congress about his efforts to pursue a possible Trump Tower project in Moscow. Cohen had told lawmakers that discussions about the project ended in January 2016, when in fact - contrary to what Trump had said publicly - they continued into the summer of that year, in the heart of Trump's presidential campaign.

When longtime Trump adviser Roger Stone was indicted in January, accused of making false statements and obstruction, he became the sixth Trump aide ensnared by Mueller's investigation, a group that included some of the president's closest confidants.

Earlier this month, Manafort was sentenced to a total of 7 1/2 years in prison for conspiracy and fraud. Cohen is set to start serving a three-year prison sentence in May.

"When your campaign manager goes to jail, that makes presidential history," said Douglas Brinkley, a history professor at Rice University. "And then to have your personal lawyer go to prison also. These aren't bit players - these are people who were part of the heart and soul of the Trump operation."

One of Mueller's core assignments from the start was to dissect exactly how Russia sought to influence the 2016 presidential campaign.

Four months before Mueller was appointed, the U.S. intelligence community laid out in a terse 14-page report how it said Russia - on the order of President Vladimir Putin - had waged an online campaign to help Trump win the election.

The special counsel added to that 66 richly detailed pages of his own, outlining in two indictments the granular specifics of the cyberoperations.

In the first, which accused 13 Russians of waging a social media influence effort that ran afoul of U.S. law, Mueller revealed he had access to the group's internal communications, including an email from September 2017 in which one of those charged wrote to a family member: "The FBI busted our work (not a joke)."

Mueller also described how the group worked offline, visiting states to gather intelligence on U.S. politics and enlisting unwitting Americans to hold rallies in support of Trump - providing the clearest window yet into Russia's covert efforts.

In the second, which charged a group of Russian military officers with hacking Democrats' emails and laundering them through fake online personae so they could be posted online, Mueller identified by name those he asserted were responsible for the attack. The indictment expanded considerably on the intelligence community's assessment.

Former independent counsel Robert Ray, now in private practice at Thompson & Knight, said it was particularly remarkable how quickly Mueller was able to work, bringing his complicated investigation to a close inside of two years.

"That's a big accomplishment, and that's also recognition of where investigations steered off course in the past," Ray said.

Notably, the indictments did not accuse any Americans of conspiring with Russia - one of the main questions the special counsel was asked to examine.

The most Mueller's team has said publicly on that topic was in court papers related to Stone, which alleged that the longtime Trump adviser made efforts to get information about the release of the hacked emails in consultation with the campaign - then lied to Congress about it.

Court filings also revealed that Manafort, as Trump's campaign chairman, provided 2016 polling data to a Russian associate who the FBI has assessed had ties to Russian intelligence - although Manafort was not charged with conspiring with Russia.

Still, the revelations throughout the course of the investigation about the extent of Russia's attempts to influence the 2016 campaign, Trump's interest in building a tower in Moscow, and repeated Russian outreach to Trump aides formed a compelling narrative, some analysts said - one muted only by how it dribbed out over time.

"It's so much, it's so gradual, it's so complicated, people don't have a chance to sort of pause, catch their breath and really sort of survey the whole story that [Mueller has] found," Kris said. "I think if you took it all in in one day, it would kill you. It's simply too much."

Ray said Mueller's careful handling of the investigation is likely to set a precedent for future special counsels.

"The whole purpose of appointing a special counsel is either to find and prosecute what you were appointed to do, or to fully investigate something and render a judgment that it wasn't appropriate to bring charges within the core of that mandate," Ray said. "My view is, either way, that's a success."

Mueller’s impact has gone far beyond the work of his own prosecutors.

His revelations have fueled calls for greater government oversight of Silicon Valley, following years in which the tech industry grew into one of the nation's wealthiest and most important economic sectors while facing little regulatory scrutiny.

Facebook, Twitter and Google were forced to contend with nationally televised questioning on Capitol Hill and internal upheaval in the wake of news that Russia used social media to promote Trump.

Facebook chief executive Mark Zuckerberg, who at first downplayed the extent of the Russian influence operation on his platform, has since apologized in the face of mounting evidence and is leading a major overhaul of the company to address public demands for greater accountability and privacy.

One of those cases, a handoff to prosecutors in Manhattan, led to a guilty plea from Cohen, Trump's longtime personal attorney, for tax evasion, bank fraud and campaign finance violations that he told a judge were directed by Trump.

That case ruptured a key personal relationship for the president, spilling into public view embarrassing details about Trump's efforts to pay off the adult-film actress known as Stormy Daniels and allowing prosecutors to pry into Trump's personal business.

The Cohen case appears to have been the spark for yet another investigation - this one related to Trump's inaugural festivities. Prosecutors in Manhattan issued a wide-ranging subpoena in February to Trump's presidential inaugural committee seeking records related to its fundraising and spending.

Meanwhile, this summer in Virginia, prosecutors will try a former business partner of Flynn, the former national security adviser, on charges that he acted as an illegal agent of Turkey.

The case underscores how the Mueller probe shined new light on a lucrative and largely unseen American lobbying industry financed by foreign interests.

Flynn will probably be the star witness. As part of a plea deal with Mueller agreeing that he had lied about his contacts with a Russian ambassador, Flynn admitted that he, too, worked as an unregistered agent of Turkey - even while advising Trump's campaign.

That revelation drew a sharp rebuke from the federal judge in Washington overseeing Flynn's case: "Arguably," U.S. District Judge Emmet Sullivan told Flynn in December, "you sold your country out."

Similarly, Manafort and Gates have admitted that they did not register for work they did for a Ukrainian political party. So has W. Samuel Patten, another political consultant, whose case in Washington began with another Mueller referral.

At Manafort's tax and bank fraud trial in Virginia in August, operatives from both parties took the stand to describe how American political consultants flock to foreign capitals to earn side money in years when there are not U.S. elections, a legal but previously less-well-understood practice.

In the wake of Mueller's appointment, the attention on foreign influence led to a dramatic rise in the number of lobbyists who have filed under the Foreign Agents Registration Act, a law from before World War II intended to bring transparency to the work for foreign entities that until recently had been only loosely enforced.

The Washington Post’s Craig Timberg contributed to this report.