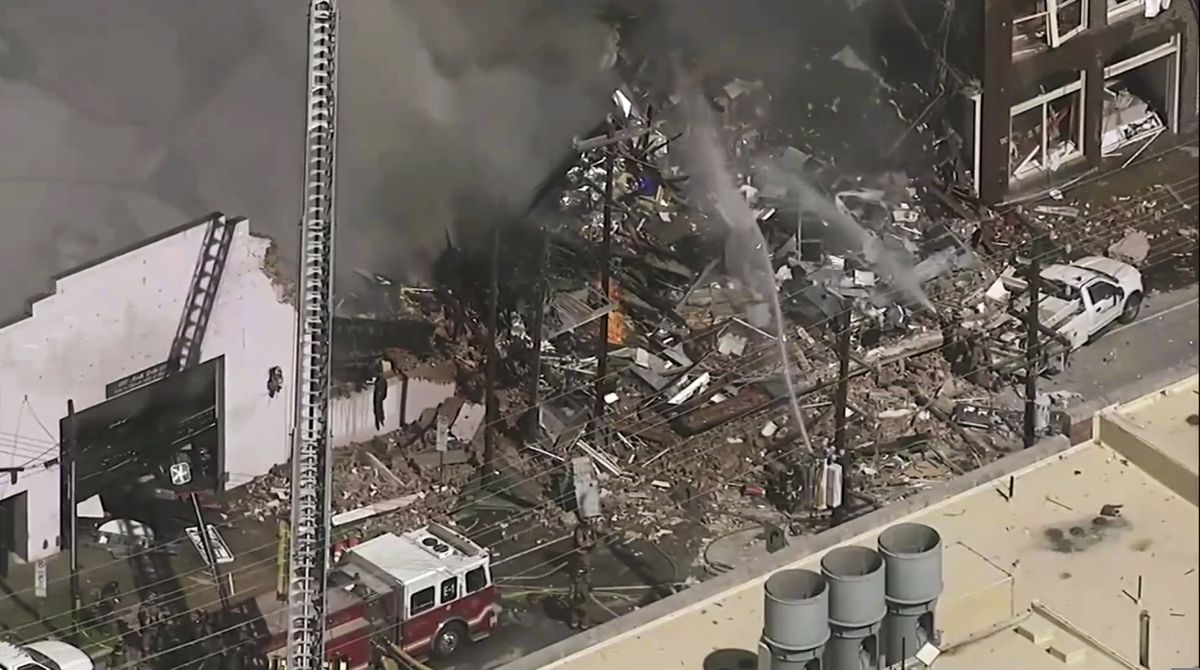 In this image taken from video firefighters and emergency officials respond to an explosion and fire in downtown Durham, N.C. on Wednesday, April 10, 2019. (WTVD-TV ABC 11 via AP)

In this image taken from video firefighters and emergency officials respond to an explosion and fire in downtown Durham, N.C. on Wednesday, April 10, 2019. (WTVD-TV ABC 11 via AP)

DURHAM, N.C. — A gas explosion that partially collapsed a North Carolina building and set it ablaze Wednesday morning killed one person and injured more than a dozen others, police said.

Police cars blocked the streets near the explosion near downtown Durham. A thick, acrid smoke hung over the shopping district and helicopters circled overhead. Television station video of the scene showed flames jumping from windows and piles of rubble.

Durham Police Department public affairs manager Wil Glenn said a contractor boring under a sidewalk hit a 2-inch gas line, triggering the explosion. One person was killed and 15 people were taken to area hospitals, Glenn said at a news conference. One firefighter was seriously injured, he said.

Students from a nearby school, the Durham School of the Arts, were evacuated and classes dismissed for the day.

Duke University employee Mary Williams said she heard the explosion and felt shaking at her building a third of a mile away.

"I was in the kitchen. I heard this loud boom and the building shook. When I looked out, I saw the smoke billowing up. I was scared for whoever was in the vicinity because it did not look very good."

Another Duke employee in the same building, Sharon Caple, said the sky darkened in the minutes afterward.

"All you saw was this black smoke," she said.

The explosion happened in a shopping district created from remodeled tobacco warehouses and industrial buildings near downtown Durham.

The building is occupied by Prescient Co., which said in July 2017 that it was moving its headquarters from Arvada, Colorado, and expected to employ about 60 executives, engineering and sales workers in Durham. The company uses specialized software to design and build precise materials that allow builders to assemble multi-story apartments, hotels and other commercial buildings faster and cheaper.