Mueller report to be lightly redacted, with detailed look at obstruction of justice investigation 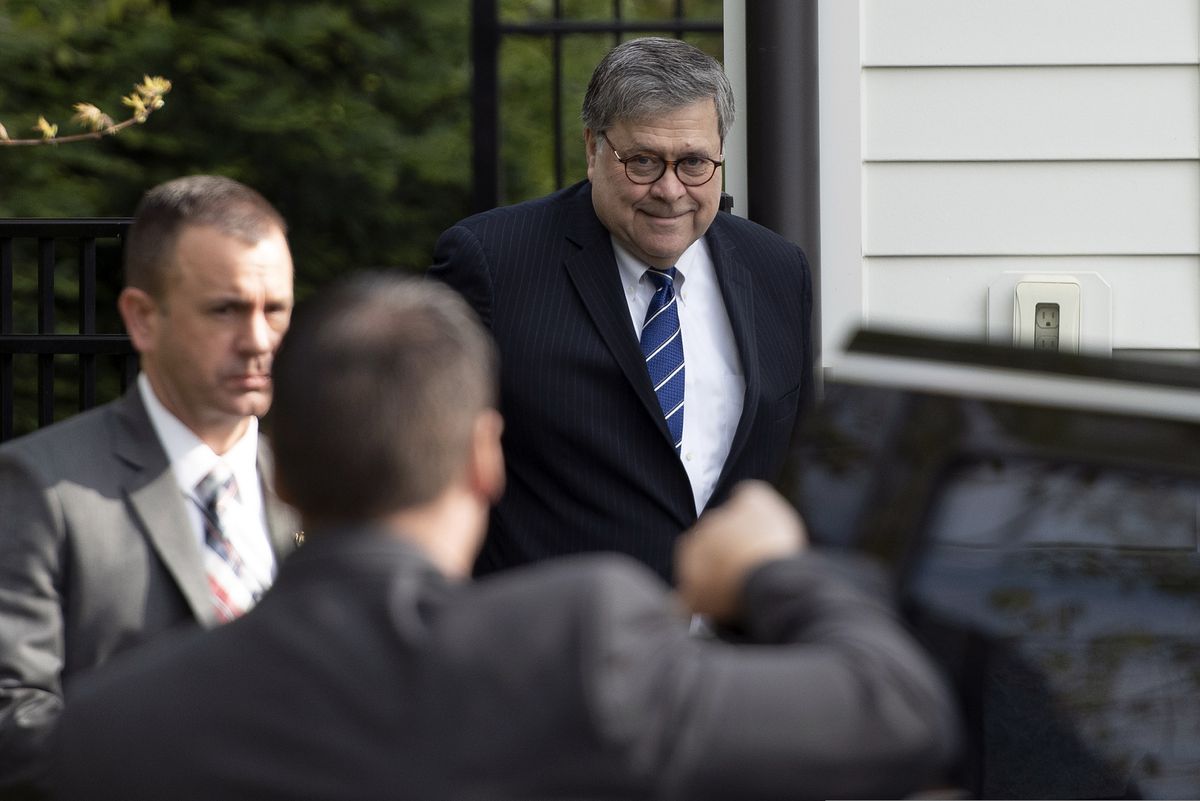 Attorney General William Barr leaves his home in McLean, Va., on Wednesday morning, April 17, 2019. Special counsel Robert Mueller's redacted report on Russian interference in the 2016 election is expected to be released publicly on Thursday and has said he is redacting four types of information from the report. Congressional Democrats are demanding to see the whole document and its evidence. (AP Photo/Sait Serkan Gurbuz)

Attorney General William Barr leaves his home in McLean, Va., on Wednesday morning, April 17, 2019. Special counsel Robert Mueller's redacted report on Russian interference in the 2016 election is expected to be released publicly on Thursday and has said he is redacting four types of information from the report. Congressional Democrats are demanding to see the whole document and its evidence. (AP Photo/Sait Serkan Gurbuz)

WASHINGTON - The Justice Department plans to release a lightly redacted version of special counsel Robert Mueller’s 400-page report Thursday, offering a granular look at the ways in which President Donald Trump was suspected of obstructing justice, people familiar with the matter said.

The report - the general outlines of which the Justice Department has briefed the White House on - will reveal that Mueller decided he could not come to a conclusion on the question of obstruction because it was difficult to determine Trump's intent and some of his actions could be interpreted innocently, these people said. But it will offer a detailed account of his alleged conduct - analyzing tweets, private threats and other episodes at the center of Mueller's inquiry, they added.

Attorney General William Barr plans to hold a 9:30 a.m. news conference to address "process questions" and provide an "overview of the report," a senior Justice Department official said. The report will be delivered on discs to Capitol Hill between 11 a.m. and noon, the official said, and will be posted on the special counsel's website thereafter.

Those who spoke to The Washington Post for this report did so on the condition of anonymity, citing the matter's supreme sensitivity.

Thursday's rollout plan - and news of the White House's advance briefing, which was first reported by ABC News and The New York Times - led to political uproar Wednesday, with Democrats suggesting the attorney general was trying to improperly color Mueller's findings before the public could read them.

"This is wrong," Rep. Jerry Nadler, D-N.Y., chairman of the House Judiciary Committee, wrote on Twitter.

While the report's light redactions might allay some of their concerns, Democrats are likely to bristle at any material that is withheld. What the Justice Department and Trump's lawyers might view as modest, lawmakers might see as overly aggressive. The redacted version of the report is expected to reveal extensive details about Trump's actions in office that came under scrutiny, but it is unclear how much the public will learn about how the special counsel's team investigated the Kremlin's efforts to interfere in the 2016 election and Russian contacts with Trump associates.

Barr also is likely to face scrutiny over the Justice Department's talks with the White House - which could help Trump and his attorneys hone their attacks on the report in advance.

Rudy Giuliani, one of Trump's lawyers, has said he is preparing a counterreport to Mueller's findings, and in a recent interview said his document would explain from the president's viewpoint every episode that could be considered obstructive. Giuliani and others have long feared Mueller's findings on obstruction, viewing them as potentially more damaging than anything Mueller found on the Trump campaign's contacts with Russians.

Mueller did not find a conspiracy between Russians and Trump or his campaign, Barr said in a brief letter of the special counsel's conclusions shared with Congress late last month.

Jay Sekulow, one of Trump's attorneys, told The Washington Post, "We do not discuss conversations that we may or may not have had with the president." A Justice Department spokeswoman declined to address questions about its briefings to the White House, the report's redactions or Mueller's findings on obstruction.

Trump had also apparently been briefed in advance of the planned news conference, which he revealed Wednesday during a radio appearance, which was confirmed later by a Justice Department spokeswoman. Barr will appear alongside Deputy Attorney General Rod Rosenstein, the spokeswoman said, and he planned to take questions.

Barr has faced intense scrutiny from the public and lawmakers on Capitol Hill for his handling of Mueller's report. The Thursday news conference could give him an opportunity to address his critics - and perhaps provide them fresh ammunition. It is sure to be watched closely by Trump, an avid TV viewer whose relationship with his attorney general will almost certainly be colored by Mueller's findings and what Barr says about them.

"It's the Department of Justice's decision to hold the news conference," Kupec said. She said that doing so is "in the interest of transparency."

Trump told the Larry O'Connor show on WMAL that he was pondering having his own news conference.

"You'll see a lot of very strong things come out tomorrow. Attorney General Barr is going to be giving a news conference. Maybe I'll do one after that; we'll see," Trump said.

A spokesman for the special counsel's office declined to comment but said Mueller will not be at the news conference.

Already, Democratic lawmakers and pundits have alleged that Barr seems to be taking steps to mitigate the political damage Mueller's report might do to Trump, and some members of Mueller's team have told associates they are frustrated by the limited information he has released about their work.

A senior White House official said Trump has praised Barr privately for his handling of the report and compared him favorably with former Attorney General Jeff Sessions, who Trump grew to loathe over his recusal from what would become Mueller's investigation.

Since the special counsel's office closed its investigation late last month, Barr and his team at the Justice Department have been reviewing the final report to determine how much of it can be made public. The Justice Department has said it plans to release the document with four categories of information shielded from public view: material from the grand jury, material that reveals intelligence sources and methods, material that is relevant to ongoing investigations, and material that could affect the privacy of "peripheral" third parties. Each redaction will be color-coded so readers know the reason material is being shielded, Barr has said.

Any redactions could be controversial, and Democrats have said they won't be satisfied unless they are given the entire, unfiltered document. It is likely House Democrats will attempt to subpoena it, sparking a legal battle that could last for months or even years.

Barr has so far disclosed only what the Justice Department terms Mueller's "principal conclusions." In a four-page letter to lawmakers, he declared last month that Mueller did not find that anyone on Trump's campaign conspired with Russia to interfere in the 2016 election, and that the special counsel declined to reach a conclusion on whether Trump had sought to obstruct justice. Barr wrote that he and Rosenstein then reviewed the evidence and did not find it sufficient to make an obstruction case.

Barr offered only a few quotes from Mueller's report, leaving a curious public with many more questions than answers about what his 22-month investigation had found.

White House officials are concerned about damaging testimony from a number of senior aides, particularly former counsel Donald McGahn and former Chief of Staff Reince Priebus, according to current and former officials. Their testimony, according to people with knowledge of it, gave a clear, detailed breakdown of some of the most controversial incidents, from the firing of James Comey as FBI director to attempts to oust Sessions. McGahn spoke with the special counsel for dozens of hours, according to two people familiar with the matter.

The Justice Department generally avoids holding news conferences - or offering any specific information - about cases it closes without charges. In 2016, then-FBI Director Comey was criticized for bucking that principle and declaring at a televised news conference that he was recommending no charges after the investigation into Hillary Clinton's use of a private email server while she was secretary of state. He took no questions.

In an October 2016 piece written for The Washington Post, Barr seemed not to strenuously object, as many other legal commenters did, to what Comey had revealed.

"The two critical facts conveyed to the public in July were that the investigation was completed and that, based on that completed investigation, no prosecution was warranted. Disclosing these facts did not run afoul of the policy against commenting on investigations while they are underway," Barr wrote. "There is nothing wrong with conveying such facts; in cases of overriding public interest, it is done all the time, as for example in the House banking scandal and the so-called Iraq-gate matter during the 1992 election."

The next year, though, he wrote in another Washington Post column that Trump was right to fire Comey because Comey had "crossed a line that is fundamental to the allocation of authority in the Justice Department" with the July announcement.

At his confirmation hearing in January, Barr publicly distanced himself from Comey's approach.

"If you're not going to indict someone, you don't stand up there and unload negative information about the person," Barr said. "That's not the way the department does business."

Barr is likely to be pressed long after Thursday to answer questions on Mueller's investigation. He is expected to testify before the House and Senate Judiciary committees in early May, and he has said he is willing to discuss with lawmakers providing more information if they are left unsatisfied by Thursday's release.

The Justice Department also revealed in a court filing Thursday in the criminal case against longtime Trump friend Roger Stone that it plans to let a "limited number" of lawmakers and their staff review a Mueller's report "without certain redactions, including removing the redaction of information related to the charges set forth in the indictment in this case."