They woke up to screams. Outside, a dingo had their toddler. 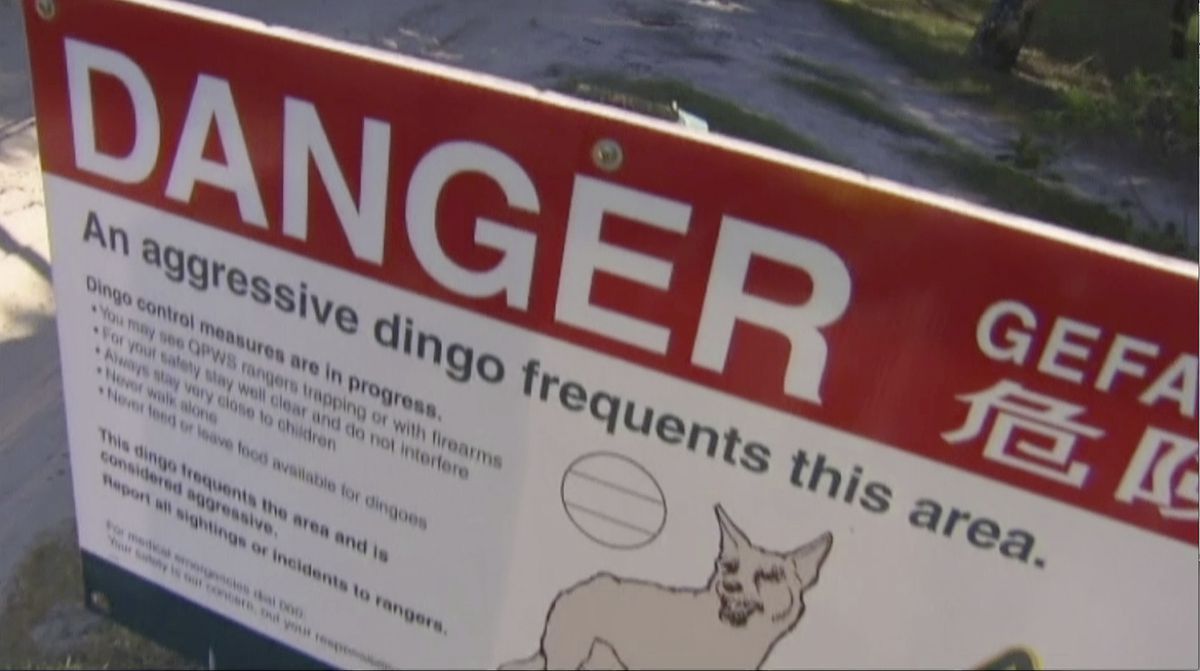 This undated image made from video, shows a sign on dingo on Fraser Island, Australia. Rescue personnel said a father fought off several dingoes to save his 14-month-old son from one of the wild dogs that was dragging the boy from their campervan on an Australian island early Friday, April 19, 2019. (Australian Broadcasting Corporation via AP)

This undated image made from video, shows a sign on dingo on Fraser Island, Australia. Rescue personnel said a father fought off several dingoes to save his 14-month-old son from one of the wild dogs that was dragging the boy from their campervan on an Australian island early Friday, April 19, 2019. (Australian Broadcasting Corporation via AP)

A family’s camping trip to Fraser Island in northeastern Australia was interrupted early Friday by the cries of their 14-month-old child - a disturbance that is not uncommon in households with toddlers.

But the boy's parents made an unimaginable discovery upon waking up to comfort their son: He was no longer in their camper van. Their panic was probably compounded by the fading volume of the boy's screams, which emerged from outside the trailer and were "becoming more distant."

The Sydney Morning Herald reports that the boy's father raced outside and found his son, who was being dragged several meters away by a wild dingo that officials say crept inside the van.

Paramedics detailed the father's heroic effort, in which he retrieved his child while fighting off several other dingoes nearby. The 14-month-old was alive but battered, suffering from a fractured skull in addition to lacerations across the back of his head and neck, ABC News reported.

He was flown to a hospital and is in stable condition.

“If it wasn’t for the parents fighting off the dingo he could have had much more severe injuries,” rescuer Frank Bertoli told news.com.au.

In a statement to the Herald, the boy's parents, who have not been identified, said their son was "doing well" but would require further surgery.

"We would like to thank everyone who has helped and cared for our son, including the emergency services and the hospital teams," they said in the statement.

Bertoli said he thinks the dingo entered the camper trailer through its canvas. According to ABC, Australia's Department of the Environment believes two dingoes found their way inside. One snatched the toddler.

Queensland Parks and Wildlife Service officials are working to identify the dingoes, which could be euthanized, ABC reports. The service has also bolstered its infantry of "specialized dingo rangers" on the island, who will warn campers of possible dangers associated with wild dogs.

Dingoes are native to Australia and prevalent on Fraser Island, a popular tourist destination on the southeastern coast of the state of Queensland, which is known for its large expanses of sand. By some estimates, the island holds 25 to 30 packs of the dogs, with each pack containing three to 12 animals.

Dingoes prey on mammals including kangaroos and wombats, but attacks on humans are apparently uncommon. The Herald reports this is the third dingo attack on the island this year - including a January incident involving a 6-year-old boy who was bitten on the leg when he ran up a sand dune.

In March, according to the Herald, a 9-year-old boy and his mother were bitten while trying to run from a pack of dingoes, which were euthanized as a result.

Perhaps the most famous example of a dingo attack took place in 1980, when Michael and Lindy Chamberlain were wrongly convicted in the death of their 9-week-old daughter after she vanished from their tent.

The Chamberlains asserted that a dingo had taken their daughter from the tent in Australia’s Outback, but officials at the time doubted their story and instead blamed the death on Lindy, whom prosecutors alleged slit her daughter’s throat and buried the child in the desert. But the girl’s jacket was found three years later near a dingo den in the desert, exonerating her parents.