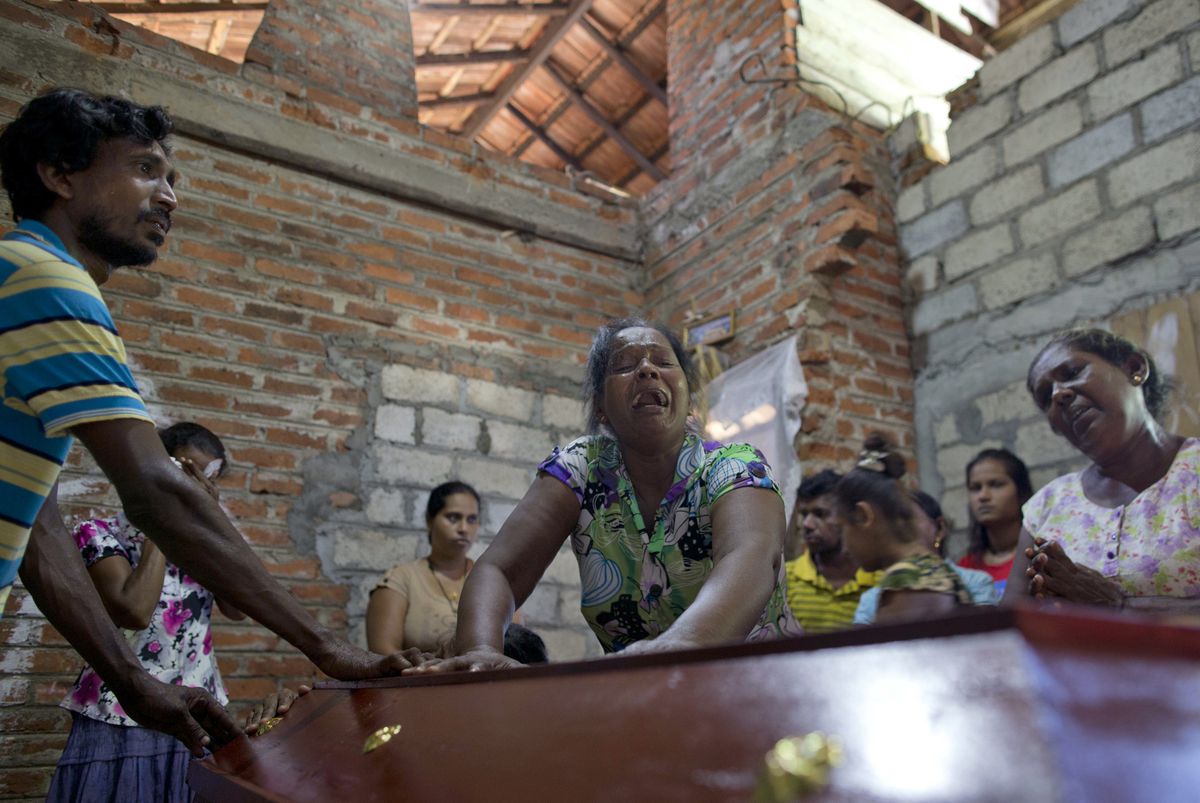 Lalitha, center, weeps over the coffin with the remains of 12-year old niece, Sneha Savindi, who was a victim of Easter Sunday bombing at St. Sebastian Church, after it returned home in Negombo, Sri Lanka, Monday, April 22, 2019. Easter Sunday bombings of churches, luxury hotels and other sites was Sri Lanka's deadliest violence since a devastating civil war in the South Asian island nation ended a decade ago. (AP Photo/Gemunu Amarasinghe)

Lalitha, center, weeps over the coffin with the remains of 12-year old niece, Sneha Savindi, who was a victim of Easter Sunday bombing at St. Sebastian Church, after it returned home in Negombo, Sri Lanka, Monday, April 22, 2019. Easter Sunday bombings of churches, luxury hotels and other sites was Sri Lanka's deadliest violence since a devastating civil war in the South Asian island nation ended a decade ago. (AP Photo/Gemunu Amarasinghe)

COLOMBO, Sri Lanka — Sri Lankan officials failed to heed warnings from intelligence agencies about the threat of an attack by a domestic radical Muslim group that officials blame for Easter Sunday bombings which killed at least 290 people, the country’s health minister said Monday.

The coordinated bombings that ripped through churches and luxury hotels were carried out by seven suicide bombers from a militant group named National Thowfeek Jamaath, Health Minister Rajitha Senaratne said.

It was not immediately clear what action, if any, was taken in response. Authorities said little was known about the group except that its name had appeared in intelligence reports.

Shortly after Senaratne spoke to reporters, a van parked near one of the bombed churches, St. Anthony's Shrine in Colombo, exploded, sending pedestrians fleeing in panic. While inspecting it, police found three bombs they attempted to defuse but that instead detonated. No injuries were reported.

Also on Monday, police found 87 detonators near Colombo's main bus depot, officials said. They declined to comment on whether they were linked to Sunday's attacks.

Because of political dysfunction within the government, Seranatne said, Prime Minister Ranil Wickremesinghe and his Cabinet were kept in the dark about the intelligence until after the attacks.

President Maithrela Sirisena, who was out of the country at the time of the attacks, ousted Wickremesinghe in late October and dissolved the Cabinet. The Supreme Court eventually reversed his actions, but the prime minister has not been allowed into meetings of the Security Council since October.

All of the bombers were Sri Lankan citizens, but authorities suspect foreign links, Senaratne said.

Earlier, Ariyananda Welianga, a government forensic crime investigator, said an analysis of the attackers' body parts made clear that they were suicide bombers. He said most of the attacks were carried out by individual bombers, with two at Colombo's Shangri-La Hotel.

The bombings, Sri Lanka's deadliest violence since a devastating civil war that ended a decade ago, killed at least 290 people with more than 500 wounded, police spokesman Ruwan Gunasekara said.

Two other government ministers also alluded to intelligence failures. Telecommunications Minister Harin Fernando tweeted: "Some intelligence officers were aware of this incidence. Therefore there was a delay in action. Serious action needs to be taken as to why this warning was ignored." He said his father had heard of a possible attack as well and had warned him not to enter popular churches.

Mano Ganeshan, the minister for national integration, said his ministry's security officers had been warned by their division about the possibility that two suicide bombers would target politicians.

Cardinal Malcolm Ranjith, the archbishop of Colombo, said the attacks could have been thwarted.

"We placed our hands on our heads when we came to know that these deaths could have been avoided. Why this was not prevented?" he said.

Earlier, Defense Minister Ruwan Wijewardena described the blasts as a terrorist attack by religious extremists, and police said 13 suspects had been arrested, though there was no immediate claim of responsibility.

In the civil war, the Tamil Tigers, a powerful rebel army known for its use of suicide bombers, was crushed by the government in 2009, and had little history of targeting Christians. While anti-Muslim bigotry has swept the island in recent years, fed by Buddhist nationalists, the island also has no history of violent Muslim militants. The country's small Christian community has seen only scattered incidents of harassment in recent years.

The explosions — mostly in or around Colombo, the capital — collapsed ceilings and blew out windows, killing worshippers and hotel guests in one scene after another of smoke, soot, blood, broken glass, screams and wailing alarms.

A morgue worker in the town of Negombo, outside Colombo, where St. Sebastian's Church was targeted, said many bodies were hard to identify because of the extent of the injuries. He spoke on condition of anonymity.

Nilantha Lakmal, a 41-year-old businessman in Negombo, went with his family to St. Sebastian's for Easter Mass. He said they all escaped the blast unscathed, but he remains haunted by images of bodies being taken from the sanctuary and tossed into a truck.

At the Shangri-La Hotel, a witness said "people were being dragged out" after the blast.

"There was blood everywhere," said Bhanuka Harischandra, a 24-year-old from Colombo and founder of a tech marketing company. He was heading to the hotel for a meeting when it was bombed. "People didn't know what was going on. It was panic mode," he said.

Most of those killed were Sri Lankans. But the three bombed hotels and one of the churches, St. Anthony's Shrine, are frequented by foreign tourists, and the ministry of tourism said 39 foreigners from a variety of countries were killed.

The U.S. said "several" Americans were among the dead, while Britain, India, China, Japan and Portugal said they, too, lost citizens.

The streets were largely deserted Monday afternoon, with most shops closed and a heavy deployment of soldiers and police. Stunned clergy and onlookers gathered at St. Anthony's Shrine, looking past the soldiers to the stricken church.

The Sri Lankan government initially lifted a curfew that had been imposed during the night but reinstated it Monday afternoon. Most social media remained blocked Monday after officials said they needed to curtail the spread of false information and ease tension in the country of about 21 million people.

Prime Minister Wickremesinghe said he feared the massacre could trigger instability, and vowed to "vest all necessary powers with the defense forces" to take action against those responsible.

The scale of the bloodshed recalled the worst days of the civil war, when the Tamil Tigers, from the ethnic Tamil minority, sought independence from the Sinhalese-dominated country. The Sinhalese are largely Buddhist. The Tamils are Hindu, Muslim and Christian.

Sri Lanka, off the southern tip of India, is about 70% Buddhist. In recent years, tensions have been running high between hard-line Buddhist monks and Muslims.

Two Muslim groups in Sri Lanka condemned the church attacks, as did countries around the world, and Pope Francis expressed condolences at the end of his traditional Easter Sunday blessing in Rome.

Six nearly simultaneous blasts took place in the morning at the shrine and the Cinnamon Grand, Shangri-La and Kingsbury hotels in Colombo, as well as at two churches outside Colombo.

A few hours later, two more blasts occurred just outside Colombo, one at a guesthouse where two people were killed, the other near an overpass, Atapattu said.

Also, three police officers were killed during a search at a suspected safe house on the outskirts of Colombo when its occupants apparently detonated explosives to prevent arrest, authorities said.

Authorities said a large bomb had been found and defused late Sunday on an access road to the international airport.

Air Force Group Captain Gihan Seneviratne said Monday that authorities found a pipe bomb filled with 50 kilograms of explosives. It was large enough to have caused damage in a 400-meter radius, he said.

Harischandra, who witnessed the attack at the Shangri-La Hotel, said there was "a lot of tension" after the bombings, but added, "We've been through these kinds of situations before."

He said Sri Lankans are "an amazing bunch" and noted that his social media feed was flooded with photos of people standing in long lines to give blood.