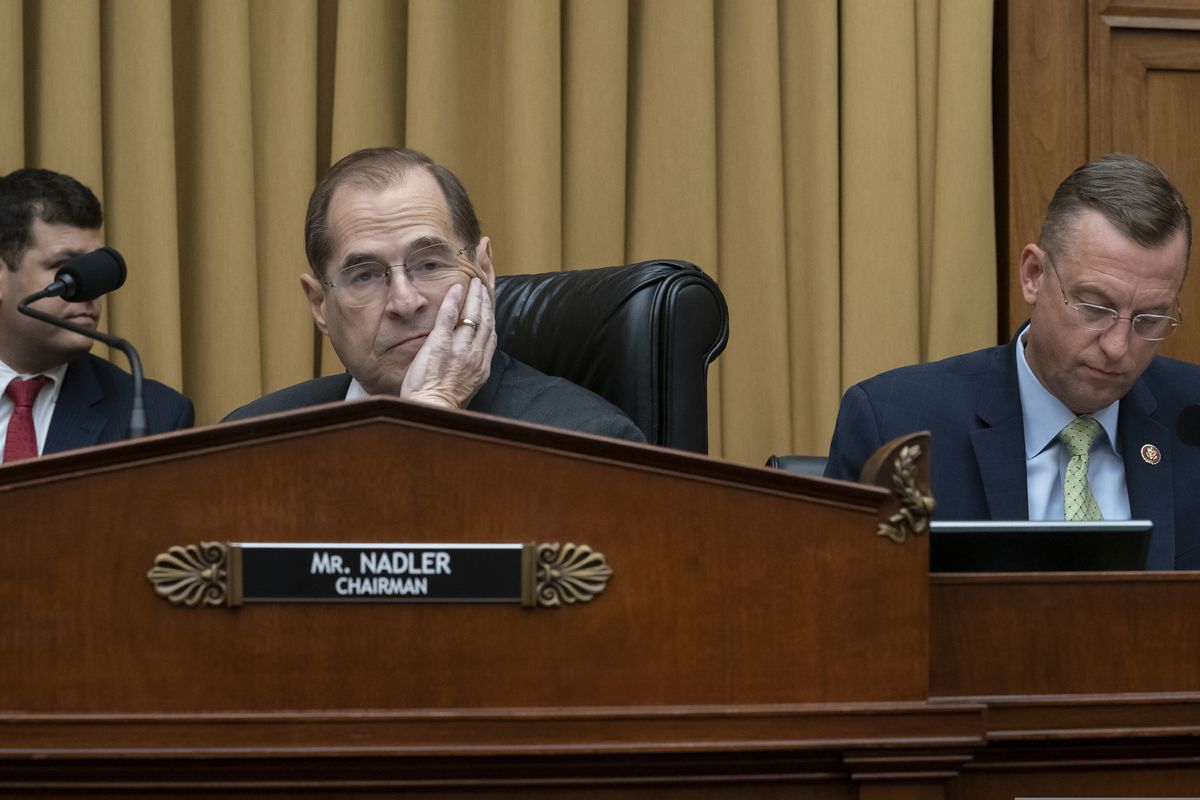 Nadler is proposing to hold Barr in contempt after the Justice Department declined to provide the committee with a full, unredacted version of special counsel Mueller's report on Trump and Russia. The committee had given Barr until 9 a.m. Monday to comply.

"Congress must see the full report and underlying evidence to determine how to best move forward with oversight, legislation, and other constitutional responsibilities," Nadler said in a statement.

The department has provided a redacted version, which Nadler said offered "disturbing evidence and analysis that President Trump engaged in obstruction of justice at the highest levels." He said Barr's failure to comply with the subpoena for the full report "leaves us no choice but to initiate contempt proceedings."

The top Republican on the committee, Rep. Doug Collins of Georgia, said, "Democrats have launched a proxy war smearing the attorney general when their anger actually lies with the president and the special counsel, who found neither conspiracy nor obstruction."

Collins said the upcoming vote is "illogical and disingenuous" as negotiations are underway with the Justice Department for access.

The resolution to be voted on Wednesday says: "William P. Barr, the Attorney General of the United States, shall be found to be in contempt of Congress for failure to comply with a congressional subpoena." Barr's failure to comply "has hindered the Committee's constitutional, oversight and legislative functions," it says.

Proceedings could be postponed if the attorney general makes a "good faith" effort to comply with the committee, Nadler said. But that appears unlikely.

Still, Democratic House leaders have signaled they will methodically take advantage of all the legal steps available. They could also file a civil lawsuit against the Justice Department — an option that could take months or even years to resolve. Some members of the committee have suggested they also could fine Barr as he withholds the information.

"The committee is prepared to make every realistic effort to reach an accommodation with the department," Nadler wrote to Barr on Friday. "But if the department persists in its baseless refusal to comply with a validly issued subpoena, the committee will move to contempt proceedings and seek further legal recourse."

Democrats say they need to see the full report, including underlying materials like interview transcripts, to conduct a complete review of Mueller's probe.

In terms of the underlying materials, Nadler said the committee wants to see witness interviews and "items such as contemporaneous notes" that are cited in the report. He also asked that all members of Congress be allowed to review an unredacted version.

The Justice Department has made a less redacted version available for House and Senate leaders and some committee heads, but the Democrats have said that is not enough and have so far declined to read that version.

Barr skipped a scheduled hearing with the Judiciary panel last week amid a dispute over how he would be questioned. Hours later, House Speaker Nancy Pelosi said she believed the attorney general had lied about his communications with Mueller in testimony last month, and that was a "crime." Justice Department spokeswoman Kerri Kupec called Pelosi's accusation "reckless, irresponsible and false."

As the fight with Barr has escalated, Democrats have been in negotiations to hear from Mueller himself. Trump complicated those negotiations Sunday when he tweeted that he would oppose Mueller's testimony.

"Bob Mueller should not testify," he tweeted. Trump had previously said he would leave the question to Barr, who has said he has no objection to Mueller testifying.

As long as Mueller remains a Justice Department employee, Trump or Barr could block him from testifying. Trump did not indicate if he would take steps to do so. It's unclear when Mueller will leave the department — or whether he would want to testify in his own capacity when he does leave.

Nadler said last week the committee was "firming up the date" for Mueller's testimony and hoping it would be May 15.

Tensions between the White House and House Democrats have been fueled by disputes over calling administration officials before multiple committees and obtaining an unredacted copy of Mueller's report as well as information relating to Trump's personal and business finances.

Trump’s repeated statements on collusion and obstruction differ from the report’s. On collusion, Mueller said he did not assess whether that occurred because it is not a legal term. He looked into a potential criminal conspiracy between Russia and the Trump campaign and said the investigation did not collect sufficient evidence to establish criminal charges on that front. Mueller didn’t charge Trump with obstruction but wrote that he couldn’t exonerate him, either.