President Trump takes over Fourth of July celebration, changing its location and inserting himself into the program 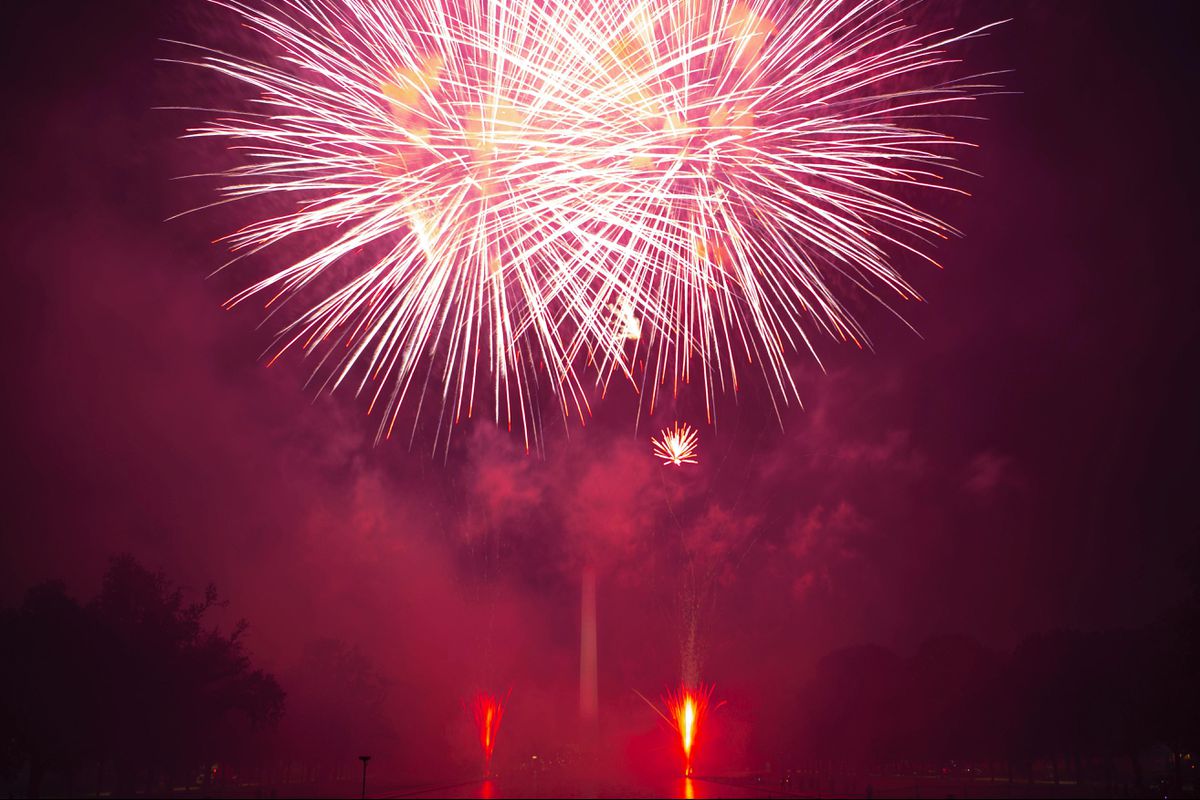 Fireworks illuminate the Mall in celebration of Independence Day in Washington on July 4, 2018. (Washington Post photo by Calla Kessler)

Fireworks illuminate the Mall in celebration of Independence Day in Washington on July 4, 2018. (Washington Post photo by Calla Kessler)

WASHINGTON - President Donald Trump has effectively taken charge of the nation’s premier Fourth of July celebration in Washington, moving the gargantuan fireworks display from its usual spot on the Mall to be closer to the Potomac River and making tentative plans to address the nation from the steps of the Lincoln Memorial, according to top administration officials.

The president's starring role has the potential to turn what has long been a nonpartisan celebration of the nation's founding into another version of a Trump campaign rally. Officials said it is unclear how much the changes may cost, but the plans have already raised alarms among city officials and some lawmakers about the potential impact of such major alterations to a time-honored and well-organized summer tradition.

Fireworks on the Mall, which the National Park Service has orchestrated for more than half a century, draw hundreds of thousands of Americans annually and mark one of the highlights of the city's tourist season. The event has been broadcast live on television since 1947, and since 1981 has been accompanied by a free concert on the West Lawn of the U.S. Capitol featuring high-profile musicians and a performance by the National Symphony Orchestra.

The new event, to be called "A Salute to America," will shift the fireworks launch to West Potomac Park, nearly a mile southwest of its usual location near the Washington Monument. In addition to a possible address by Trump, the location may feature a second stage of entertainment apart from the performers at the Capitol, officials said.

The revised Independence Day celebration is the culmination of two years of attempts by Trump to create a major patriotic event centered on him and his supporters, including failed efforts to mount a military parade modeled on the Bastille Day celebration in France. The new event has become a top priority for new Interior Secretary David Bernhardt, who Trump tasked with the job three months ago, officials said.

The president has received regular briefings on the effort in the Oval Office and has gotten involved in the minutiae of the planning - and initially argued that the fireworks should be launched from a barge in the Potomac River, administration aides said. The president has shown interest in the event that he often does not exhibit for other administration priorities, the aides added.

"I think the president is excited about the idea, and we're working hard on it, and I think it could be very, very meaningful," Bernhardt said in an interview. "The president loves the idea, as probably all Americans do, of celebrating America on the Fourth of July, or thereabouts."

Rep. Betty McCollum, D-Minn., who chairs the House Subcommittee on Interior, Environment and Related Agencies, said in an interview that she is concerned that Trump could polarize what is typically a unifying event for Americans.

An official in the administration of D.C. Mayor Muriel Bowser, a Democrat, said federal officials have informed the city government of potential changes to the July Fourth celebration, but that the logistics and cost of the altered format had not been finalized.

The official - who spoke on the condition of anonymity to candidly discuss preparations for the event - said the city was concerned about moving the fireworks and about the logistics of the president traveling to the Mall to address the crowds, which could cut off the flow of visitors to and from nearby Metro stations.

"We have a lot of people come to the Fourth of July. Logistically, over the years, the kinks have been worked out," the official said. "We don't want to throw off what already works."

The president's idea for a Trump-influenced July Fourth celebration began within hours of attending a lavish Bastille Day parade in Paris in 2017, former aides say. Before Air Force One took off to return from France, Trump came to the back of the staff cabin and laid out the particulars of a proposed military parade in Washington - down to the types of tanks that he wanted in the streets and the kind of aircraft he wanted to fly overhead.

The idea later shifted to become a Veterans Day-linked parade instead, before collapsing altogether last August as costs for the potential event ballooned. Trump blamed local officials in canceling the event.

Then, this past February, Trump announced on Twitter that Americans should "HOLD THE DATE!" on July 4 for a "Major fireworks display, entertainment and an address by your favorite President, me!"

There have been no public announcements since then, but federal officials are working furiously to adjust plans for an event that has been largely unchanged for at least two decades.

It is unclear whether the changes to the Mall celebration will increase costs for taxpayers. Launching the fireworks last year cost roughly $250,000, a figure that does not include the cost of security, portable toilets and fencing. The D.C. official said the city would expect the federal government to pay for any new costs incurred by changes to the celebration.

In justifying Trump's changes, Interior officials argued that moving the fireworks launching site from the north and south sides of the Lincoln Memorial Reflecting Pool - where it has been located for at least 18 years - to West Potomac Park will allow more for visitors.

National Park Service spokesman Mike Litterst said the agency typically has to close an area around the Reflecting Pool for about 10 days before the event, cutting off access to one of the Mall's most popular sites.

Bernhardt said that by altering the launch site, "that is that's going to be a significant expansion of space that's available to watch the fireworks from the Mall."

"And we might even have some more surprises in store for the public, very very soon," the secretary added.

Trump has sometimes featured fireworks at his political events, including at a campaign rally this week in Panama City, Florida. The Trump administration is also taking steps to expand fireworks celebrations elsewhere in the United States.

On Tuesday, Bernhardt and South Dakota Gov. Kristi Noem, a Republican, announced they had reached an agreement allowing the Park Service to resume launching fireworks at Mount Rushmore in 2020. That practice, which began in 1998, stopped in 2009 after Park Service officials determined that a pine beetle infestation had heightened the risk of a forest fire igniting in the area.

"I am pleased to inform you that THE BIG FIREWORKS, after many years of not having any, are coming back to beautiful Mount Rushmore in South Dakota. Great work @GovKristiNoem and @SecBernhardt! #MAGA," Trump tweeted on Tuesday.

Trump's focus on Independence Day reflects a broader pattern of focusing on the details of projects important to him personally. He grew obsessed, for example, with the renovation of FBI headquarters in Washington, asking for building specs, floor plans and even furniture and carpet schemes, current and former aides said. "He wanted to be the project manager," a former senior administration official said.

No president has participated in a Fourth of July celebration on the Mall in recent memory, usually celebrating instead at the White House. Ronald Reagan participated in a "Star Spangled Salute to America" at the Jefferson Memorial on July 3, 1987, which showcased an economic announcement, but the regular fireworks celebration happened the next day as usual.

Reagan’s unveiling of an “Economic Bill of Rights” took place at 10 a.m., with the vice president, secretary of state and other members of the administration in attendance. The official White House diary estimated the crowd size at 10,000, though Reagan said it was half that. He later said that he “didn’t remember ever being hotter than I was on that platform in the sun.”