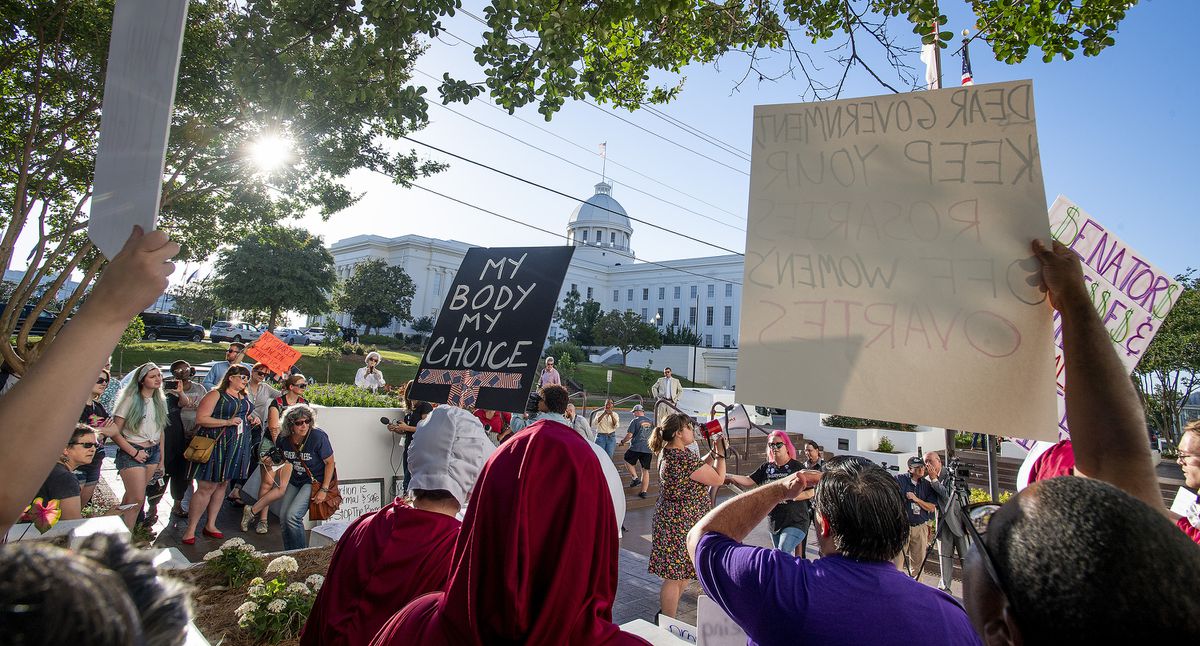 Lucia Hermo, with megaphone, leads chants during a rally against HB314, the near-total ban on abortion bill, outside of the Alabama State House in Montgomery, Ala., on Tuesday May 14, 2019. (Mickey Welsh/The Montgomery Advertiser via AP)

Lucia Hermo, with megaphone, leads chants during a rally against HB314, the near-total ban on abortion bill, outside of the Alabama State House in Montgomery, Ala., on Tuesday May 14, 2019. (Mickey Welsh/The Montgomery Advertiser via AP)

WASHINGTON - The race may be on among conservative states to pass restrictive abortion laws aimed at giving the Supreme Court the opportunity to overturn its landmark Roe v. Wade decision, but the justices are much more likely to take a gradual approach to the issue.

The court in general - and Chief Justice John Roberts in particular - prefers a step-by-step process when shifting the court's jurisprudence, rather than disposing of an iconic landmark ruling in one grand gesture.

That would likely hold true especially for one as etched in the American public's consciousness as Roe, decided in 1973.

It seems almost certain that the court will confront state restrictions on abortion in some form during the term that begins in October, with a decision coming in the midst of the 2020 presidential election.

But even those excited about the possibility of a Supreme Court fortified by conservative justices thought to be skeptical of Roe don't foresee immediate results.

"It's always very hard to predict what the court will do," said Catherine Glenn Foster, president and CEO of Americans United for Life, an antiabortion legal organization. "But I think they're going to look at incremental means first."

On this, abortion rights supporters agree - with the caveat that the court does not need to overturn Roe to allow what they consider extreme limits on accessibility to the procedure.

Multiple cases involving abortion restrictions less fundamental than the Alabama law passed Wednesday are already at the Supreme Court, and the justices could decide at any time to take one or all.

"It is a mistake to think the only thing that matters is waking up to a headline that says 'Supreme Court reverses Roe v. Wade,' " said Louise Melling, deputy legal director of the American Civil Liberties Union and director of its reproductive rights center.

The opportunities for a Supreme Court with two recent nominees from President Trump, who has said he would like to see Roe overturned, are numerous.

Justices earlier this year stayed a Louisiana law that advocates say would have left the state with only one doctor authorized to perform abortions. Roberts joined the court's liberals in stopping the law from going into effect - for now.

But four members of the court dissented, and it seems inevitable that the full court will review the lower court decision approving the Louisiana law, which seems to conflict with a Supreme Court decision from 2016.

At the same time, the justices since January have pondered whether to review parts of an Indiana law passed when Vice President Mike Pence was the state's governor but blocked by lower courts. It has been listed as an item of discussion for the justices 12 times at their private conferences, and was on the list for their Thursday meeting as well.

One provision of the law would prohibit doctors from performing an abortion if the woman is choosing the procedure because of the fetus' gender or race, or because of a diagnosis or "potential diagnosis" of Down syndrome or "any other disability." It requires doctors to inform women of these prohibitions. Another part of the law requires that the "remains" of abortion or miscarriage be buried or cremated, as required of other human remains.

A separate petition at the court concerns another blocked provision of Indiana law, requiring women who want an abortion to have an ultrasound at least 18 hours before the procedure.

Alabama's law is intended to bring a more fundamental question.

"What this bill is designed to do is to go to the Supreme Court and challenge that particular precedent that said in 1973 that abortion is legal on demand essentially any time, anywhere, for any reason," said Alabama Sen. Clyde Chambliss.

But the right is hardly that expansive, in part because of what happened the last time antiabortion activists thought they had secured a Supreme Court majority that would overturn Roe.

Instead, in 1993's Planned Parenthood v. Casey, the court adopted a new way to judge state attempts to restrict abortion. Justices Sandra Day O'Connor, Anthony Kennedy and David Souter wrote a plurality opinion reaffirming the basic right of a woman to choose an abortion before viability outside the womb, but acknowledged a state's interest in protecting the unborn.

Restrictions on the procedure should be analyzed by whether they pose an "undue burden" on a woman's right, a malleable standard that has led to a "checkerboard" of state laws, in the words of Nancy Northup, president and chief executive of the Center for Reproductive Rights.

For instance, even in upholding the basic right to abortion, the Casey court approved Pennsylvania's requirement of a waiting period before a woman can receive the procedure, and that minors receive the consent of a parent or the approval of a judge.

Casey has led to extreme protection of abortion rights in some states, with even public funding available, and an increasing load of restrictions on women, doctors and clinics in others.

"If the promise of Roe is that all women have equal access to abortion regardless of the Zip code" they live in, Northup said, that already is gone.

Her organization represents the Louisiana clinics objecting to a state law requiring doctors who perform the procedure to have admitting privileges at nearby hospitals.

The law is virtually identical to a Texas law that the Supreme Court struck down 5 to 3 in 2016. In Whole Women's Health v. Hellerstedt, Justice Stephen Breyer, writing for the majority, said the admitting-privileges requirement "provides few, if any, health benefits for women, poses a substantial obstacle to women seeking abortions, and constitutes an 'undue burden' on their constitutional right to do so."

But last fall, a panel of the U.S. Court of Appeals for the 5th Circuit upheld the Louisiana law in a 2-to-1 vote, finding factual distinctions between how the restriction played out in Texas and Louisiana. The full court, considered one of the most conservative of the regional appeals courts, voted not to reconsider the panel's decision.

But in February, the Supreme Court put the ruling on hold.

The Supreme Court's decision in Whole Woman's Health was the court's most important one on abortion in a quarter-century. But it was decided by an eight-member Supreme Court in the wake of conservative Justice Antonin Scalia's death.

In the majority was Kennedy, who has now retired.

In dissent were Roberts and Justices Clarence Thomas and Samuel Alito.

Trump's choices, Justices Neal Gorsuch and Brett Kavanaugh, were supported by antiabortion activists, and both in February said they would have let the Louisiana law go into effect.

The case provides a test of whether the court will uphold a very recent precedent, Northup said.

“The only change between then and now is the composition of the court,” she said.