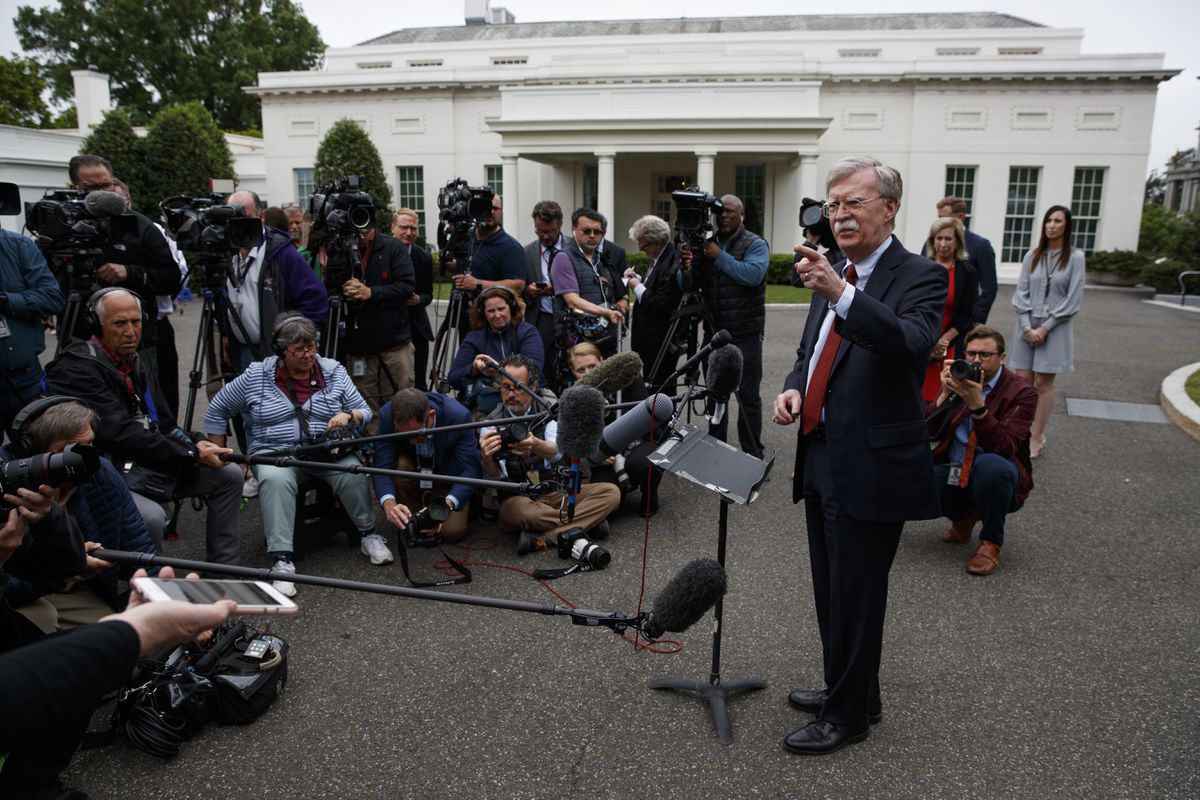 BEIRUT - The State Department on Wednesday ordered all "non-emergency U.S. government employees" to leave Iraq amid soaring tensions with Iran, which backs proxy forces there.

It said in a statement that the announcement affects both the U.S. Embassy in the capital, Baghdad, and a consulate in the northern city of Irbil.

"Normal visa services at both posts will be temporarily suspended," the department said. "The U.S. government has limited ability to provide emergency services to U.S. citizens in Iraq."

The Trump administration has accused Iran of supporting "imminent attacks" on U.S. personnel in the region but has provided neither details nor evidence. Instead it has used a burst of diplomacy and briefings to try to win support for an increasingly aggressive stance against Tehran.

Officials have spotlighted recent U.S. decisions to deploy an aircraft carrier, strategic bombers and other military assets to reinforce troops across the Middle East. They have also told reporters that further military action is on the table.

But allies have expressed caution in public and alarm in private, challenging U.S. claims of a rising threat level, and, at times, raising concerns that the diplomatic spat is being politicized by the Trump administration.

European Union foreign policy chief Federica Mogherini said Monday that Europe wanted to avoid "escalation on the military side" after Secretary of State Mike Pompeo crashed a summit of EU foreign ministers in Brussels on Monday in an attempt to bring them on board. Playing off Pompeo's comments regarding "maximum pressure," Mogherini called instead for "maximum restraint."

Pompeo asked the diplomats from Britain, France and Germany, all of which were parties to the 2015 nuclear agreement with Iran, to convey a message to Tehran, senior State Department officials said Wednesday.

"We asked them to use their influence with the Iranian regime to explain that they need to de-escalate," an official said. "That's the message. That was the request."

The official is one of three who briefed reporters anonymously on the condition of anonymity to discuss closely held intelligence. They described the decision to draw down the embassy staff as a common-sense precaution, not a rush to war.

"It would be an act of gross negligence if we did not take the necessary precautions in the light of credible threat streams," one official said. "That does not mean we are rushing to a conflict."

The decision to order all unessential personnel to leave the U.S. Embassy in Baghdad was prompted by intelligence over the past week suggesting that an attack on Americans by Iranian-backed militias was imminent, the officials said.

"This is an imminent threat to our personnel," said one official. "This threat stream, let me tell you, is real," he added, comparing it to the situation in 2011 in Iraq when U.S. installations were under direct attack.

The officials said intelligence about the behavior of Iraqi militias directly linked to Iran had been amassing over more than a week, suggesting that the militias had started making preparations for an attack on Americans. Though the specific target and dates were not known, the officials said the trajectory was clear.

"We know the groups, we know who the groups talk to," the official said. "It isn't Tibetans giving these guys orders."

The State Department issued a partial departure order Wednesday for many employees at the U.S. Embassy in Baghdad, a process that typically takes a few days to complete. The facility is one of the largest in the world, and even after the staff is whittled down, there will still be a large number of Americans working there.

Norbert Röttgen, chair of the foreign affairs committee in the Bundestag, the German parliament, said Wednesday that he was not aware of the specifics of Pompeo's Iran warnings. But he noted pointedly that German security agencies and intelligence services do not share the view that the threat of an Iranian military strike is escalating.

He described the U.S. warnings - and threats of massive retaliation should Iran strike - as "saber rattling, a show of force to demonstrate seriousness and to justify American foreign policy vis-a-vis Iran."

Iran has long supported a network of proxy forces across the Middle East, backing militias in Iraq, Lebanon, Syria and Yemen as part of a broader struggle for influence. President Donald Trump campaigned on a platform of rolling back that influence, and his national security adviser, John Bolton, is a longtime advocate of boxing Tehran into a corner.

"We don't seek a war, nor do they," he said. "They know a war wouldn't be beneficial for them."

As tensions rose this week, several U.S. allies appeared to distance themselves from U.S. missions in the region. On Tuesday, Spain announced that it had pulled a frigate from a U.S.-led naval group that is headed for the Persian Gulf.

On Wednesday, Germany and the Netherlands said they had suspended participation in a training mission for Iraqi troops. Röttgen said the German decision to temporarily suspend its training mission was based on a U.S. tip of a specific security threat in Iraq. But he said he did not believe it was directly related to broader U.S. concerns about Iranian military action.

But he cautioned that escalation is a dangerous game. "Accidents happen. Misinterpretation of behavior happens," Röttgen said. "If there is conflict, it would not be by intention, but by accident."

Iran, which is led by Shiite Muslim clerics, commands significant influence among certain political and military quarters in Iraq, backing clerics and politicians as well as some of the Shiite militias the United States once openly fought. More recently, the two were part of an uneasy alliance in Iraq in the fight against the Islamic State militant group.

The United States also has about 5,000 military personnel stationed in Iraq, after years-long battles to defeat Islamist militants there. With the Islamic State officially defeated, there have been growing calls among Iraqi lawmakers for U.S. troops to depart.

There are few indications, however, that such a decision is likely in the near future, and the U.S.-led coalition continues to lead airstrikes and ground operations against Islamic State holdouts, particularly north of Baghdad.

The State Department's order for the withdrawal of non-emergency government personnel came days after it warned American citizens not to travel to Iraq.

In a statement Wednesday, Iraq's Foreign Ministry described the security situation as "stable" and urged dialogue between all parties.

"Iraq is a country that respects its partners and friends [and] shares common interests with them," it said.

Birnbaum reported from Brussels. Carol Morello in Washington, Rick Noack in Berlin and Mustafa Salim in Baghdad contributed to this report.