Trump, frustrated by advisers, is not convinced the time is right to attack Iran 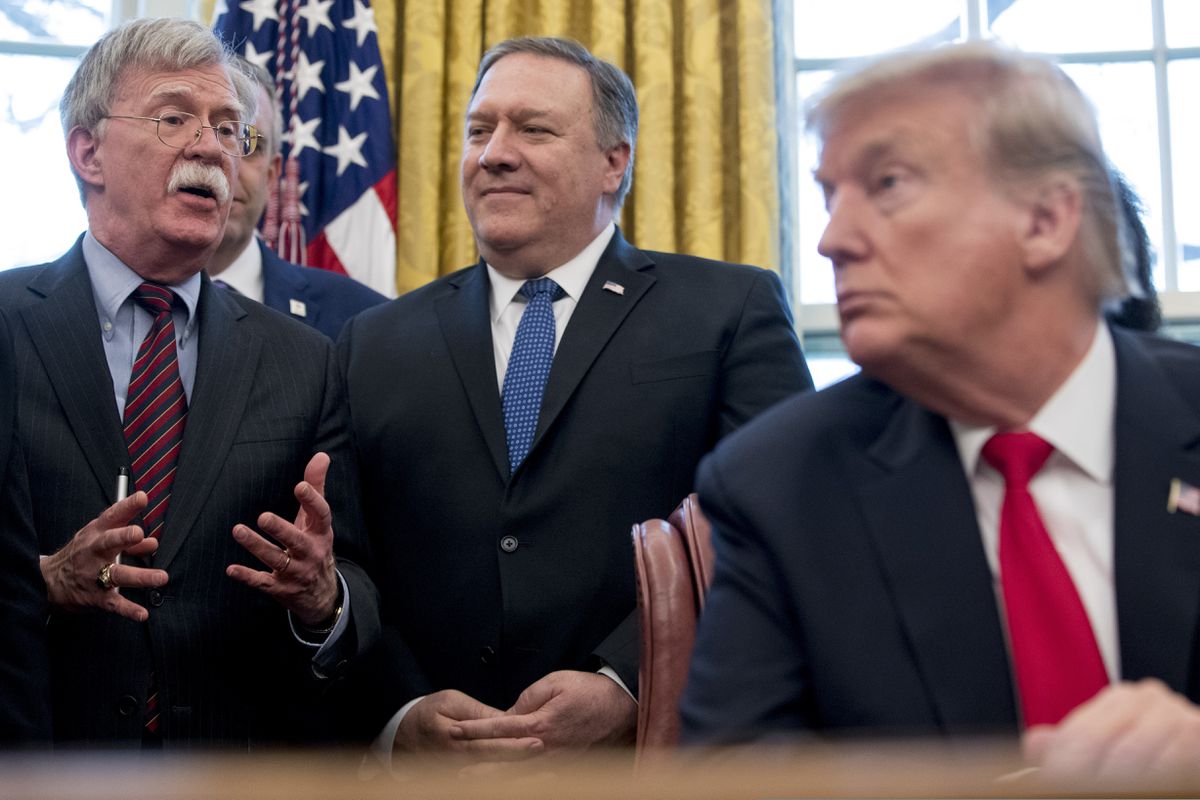 WASHINGTON - The Trump administration has been on high alert in response to what military and intelligence officials have deemed specific and credible threats from Iran against U.S. personnel in the Middle East.

But President Donald Trump is frustrated with some of his top advisers, who he thinks could rush the United States into a military confrontation with Iran and shatter his long-standing pledge to withdraw from costly foreign wars, according to several U.S. officials. Trump prefers a diplomatic approach to resolving tensions and wants to speak directly with Iran's leaders.

Disagreements over assessing and responding to the recent intelligence - which includes a directive from Iran's supreme leader, Ayatollah Ali Khamenei, that some American officials interpret as a threat to U.S. personnel in the Middle East - are also fraying alliances with foreign allies, according to officials in the United States and Europe.

Trump grew angry last week and over the weekend about what he sees as warlike planning that is getting ahead of his own thinking, said a senior administration official with knowledge of conversations Trump had regarding national security adviser John Bolton and Secretary of State Mike Pompeo.

"They are getting way out ahead of themselves, and Trump is annoyed," the official said. "There was a scramble for Bolton and Pompeo and others to get on the same page."

Bolton, who advocated regime change in Iran before joining the White House last year, is "just in a different place" from Trump, although the president has been a fierce critic of Iran since long before he hired Bolton. Trump "wants to talk to the Iranians; he wants a deal" and is open to negotiation with the Iranian government, the official said.

"He is not comfortable with all this 'regime change' talk," which to his ears echoes the discussion of removing Iraqi President Saddam Hussein before the 2003 U.S. invasion, said the official, who, like others, spoke on the condition of anonymity to discuss private deliberations.

While Trump grumbles about Bolton somewhat regularly, his discontent with his national security adviser is not near the levels it reached with Rex Tillerson when he served as Trump's secretary of state, the official added.

Trump denied any "infighting" related to his Middle East policies in a tweet on Wednesday. "There is no infighting whatsoever," Trump said. "Different opinions are expressed, and I make a decisive and final decision - it is a very simple process. All sides, views and policies are covered. I'm sure that Iran will want to talk soon."

On Wednesday morning, the president attended a Situation Room briefing on Iran, a person familiar with the meeting said.

Pentagon and intelligence officials said three distinct Iranian actions have triggered alarms: information suggesting an Iranian threat against U.S. diplomatic facilities in the Iraqi cities of Baghdad and Irbil, U.S. concerns that Iran may be preparing to mount rocket or missile launchers on small ships in the Persian Gulf, and a directive from Khamenei to the Islamic Revolutionary Guard Corps and regular Iranian military units that some U.S. officials have interpreted as a potential threat to U.S. military and diplomatic personnel. On Wednesday, the State Department ordered nonessential personnel to leave the U.S. missions in Baghdad and Irbil.

"We believe that escalation by the United States is unacceptable and uncalled for," Zarif told his Japanese counterpart, Taro Kono.

U.S. and European officials said there are disagreements about Iran's ultimate intentions and whether the new intelligence merits a more forceful response than to previous Iranian actions.

Some worry that the renewed saber-rattling could create a miscalculation on the ground, said two Western officials familiar with the matter. And Iran's use of proxy forces, the officials said, means it does not have absolute control over militias, which could attack U.S. personnel and provoke a devastating U.S. response that in turn prompts a counterescalation.

Bolton warned in a statement last week that "any attack on United States interests or on those of our allies will be met with unrelenting force."

Military officials have described themselves as torn between their desire to avoid open confrontation with Iran and their concern about the recent intelligence, which led the commander of the U.S. Central Command, Gen. Kenneth McKenzie, to request a host of additional military assets, including an aircraft carrier and strategic bombers.

Officials said uniformed officers from the Joint Chiefs of Staff, led by its chairman, Marine Corps Gen. Joseph Dunford, have been among the leading voices articulating the costs of war with Iran.

Other officials said the view that deterrence rather than conflict was required was "monolithic" across the Pentagon and was shared by civilian officials led by acting Defense Secretary Patrick Shanahan, whom Trump nominated last week to remain in the job but who has not yet been confirmed by the Senate. As the tensions have intensified, Shanahan has been in touch multiple times a day with other senior leaders, including Bolton, Pompeo and Dunford, officials said.

Defense officials said thath they are considering whether they will field additional weaponry or personnel to the Persian Gulf region to strengthen their deterrent against possible action by Iran or proxy groups, but that they hope additional deployments will prevent rather than fuel attacks.

Trump's fears of entangling the United States in another war has been a powerful counterweight to the more bellicose positions of some of his advisers.

Trump has called the Iraq War a massive and avoidable blunder, and in his political support was built in part on the idea that he would not repeat such a costly expenditure of American blood and treasure.

A new deal with Iran, which Trump has said he could one day envision, would be a replacement for the international nuclear compact he left last year that was forged by the Obama administration. Trump's early policy on Iran, which predated Bolton's arrival, was aimed at neutralizing the pact and clearing the way for an agreement he thought would more strictly keep Iran in check.

Trump's administration has been frustrated, however, that Iran and the rest of the signatories to the nuclear agreement have kept it in force.

Trump's anger over what he considered a more warlike footing than he wanted was a main driver in Pompeo's decision last weekend to suddenly cancel a stop in Moscow and on short notice fly instead to Brussels, where he sought meetings on Monday with the European nations that are parties to the Iran nuclear deal, two officials said. Pompeo was not accorded the symbolic welcome of joining their joint Iran-focused meeting. Instead, he met with foreign ministers one by one.

Pompeo's visit was meant to convey both U.S. alarm over the recent intelligence on Iran and Washington's desire for diplomacy, not war, two officials said.

But European leaders, who have been watching the febrile atmosphere in Washington with alarm, have not been convinced, according to conversations with 10 European diplomats and officials from seven countries, all of whom spoke on the condition of anonymity to discuss sensitive assessments of Washington and Tehran.

Pompeo "didn't show us any evidence" about his reasons Washington is so concerned about potential Iranian aggression, said one senior European official who took part in one of Pompeo's meetings. The official's delegation left the meeting unconvinced of the American case and puzzled about why Pompeo had come at all.

Many officials in European capitals said they fear that conflict with Iran could have a cascading effect on their relations with Washington, ripping open divisions on unrelated issues.

They distrust Trump's Iran policy, fearing that key White House advisers are ginning up rationales for war, and they seek reelection support from citizens who hold Trump in low regard and would punish them for fighting alongside Americans on the Iran issue.

"We cannot, and we will not, be led into dangerous military adventurism," he said.

Anxieties over the heightened threat environment spilled over into Capitol Hill during a classified briefing Wednesday. Rep. Liz Cheney, R-Wyo., argued that the intelligence warranted an escalation against Iran, said one person with knowledge of the briefing. In response, Rep. Seth Moulton, D-Mass., accused her of exaggerating the threat in what the person described as a "very heated exchange."

A representative for Moulton declined to comment. A spokesman for Cheney said the congresswoman "will never comment on classified briefings and believes that any member or staffer who does puts the security of the nation at risk."

The Washington Post’s Michael Birnbaum in Brussels and Missy Ryan, Karen DeYoung and Carol Morello in Washington contributed to this report.