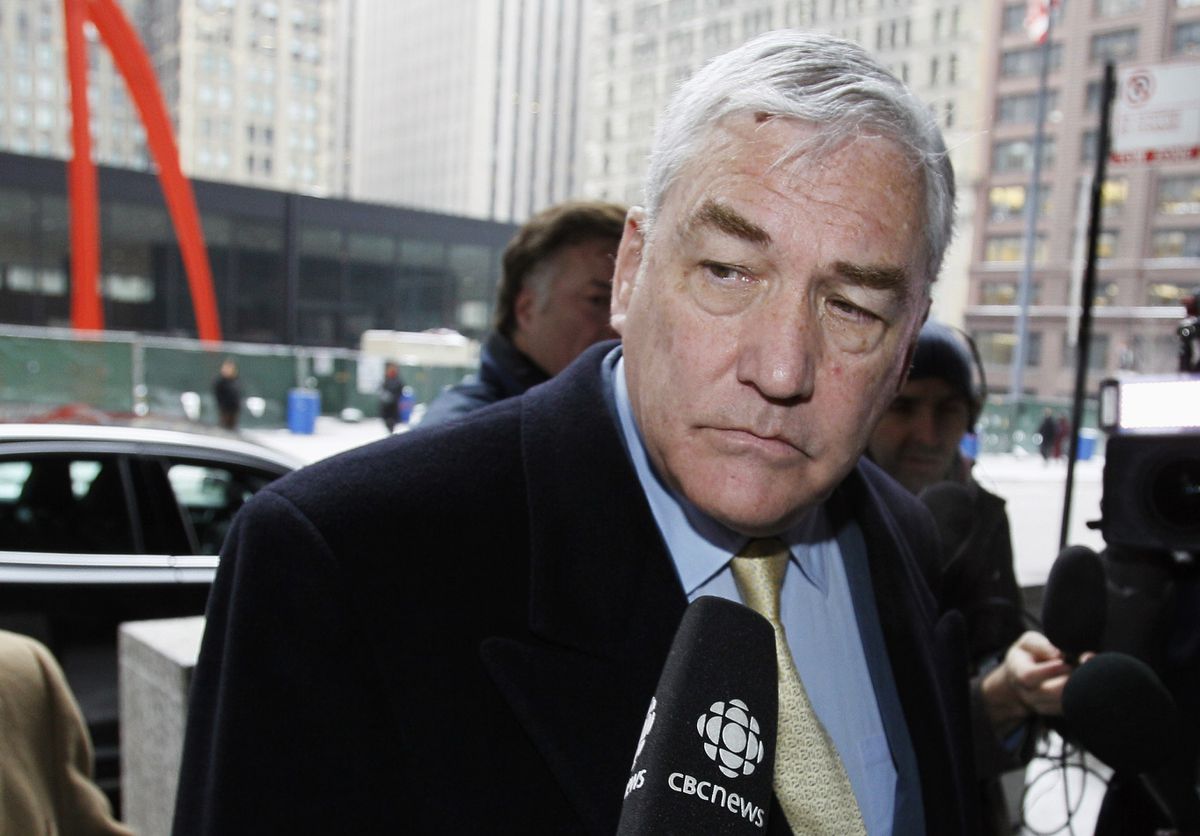 FILE - In this Jan. 13, 2011 file photo, Conrad Black arrives at the federal building in Chicago. President Donald Trump has granted a full pardon to Black, a former newspaper publisher who has written a flattering political biography of Trump. Black's media empire once included the Chicago Sun-Times and The Daily Telegraph of London. (AP Photo/Charles Rex Arbogast, File)

FILE - In this Jan. 13, 2011 file photo, Conrad Black arrives at the federal building in Chicago. President Donald Trump has granted a full pardon to Black, a former newspaper publisher who has written a flattering political biography of Trump. Black's media empire once included the Chicago Sun-Times and The Daily Telegraph of London. (AP Photo/Charles Rex Arbogast, File)

Conrad Black was convicted in 2007 on fraud charges, including embezzlement and obstruction of justice. He served more than three years in prison and was deported to his native Canada after he was released in 2012. He was barred from returning to the United States for 30 years.

The White House said in a statement that Black was "entirely deserving" of the pardon. In listing Black's accomplishments, it mentions biographies Black wrote about Presidents Franklin D. Roosevelt and Richard Nixon, but not his tome on Trump.

On the first page of that book, "Donald J. Trump: A President Like No Other," Black writes: "Like the country he represents, Donald Trump possesses the optimism to persevere and succeed, the confidence to affront tradition and convention, a genius for spectacle, and a firm belief in common sense and the common man."

Black, whose media company owned the Chicago Sun Times, at one time partnered with Trump to build Trump Tower in Chicago, but Trump later bought him out.

Black denied at the end of last year that he was trying to get a pardon from Trump.

"You are correct that no pardon has been applied for, and I have no comment on the subject," Black told a Canadian news outlet. "The public speculation about it that I have seen is bunk."

Black wrote a column Wednesday in Canada’s National Post describing how Trump called him and revealed the pardon, the Associated Press reported.

“He could not have been more gracious and quickly got to his point: he was granting me a full pardon,” wrote Black, who used much of the rest of the column to explain the case. He called it a long ordeal that was “never anything but a confluence of unlucky events, the belligerence of several corporate governance charlatans, and grandstanding local and American judges, all fanned by an unusually frenzied international media showing exceptional interest in the case because I was a media owner.”

In its statement, the White House offered a list of household names who have vouched for Black’s character, including Henry Kissinger, Elton John and Rush Limbaugh.

In addition to his book, Black frequently writes columns praising Trump and considers the president a friend.

Trump is quoted in a 2004 Vanity Fair story about Black's legal troubles, predicting Black will bounce back.

“In 1990 or 1991, when I owed billions of dollars, some people shied away from me,” Trump said. “And now everyone is kissing my ass and begging me to sit at their right-hand side at the table. Conrad is a tremendously strong man who will overcome these obstacles in the end. He will prevail.”