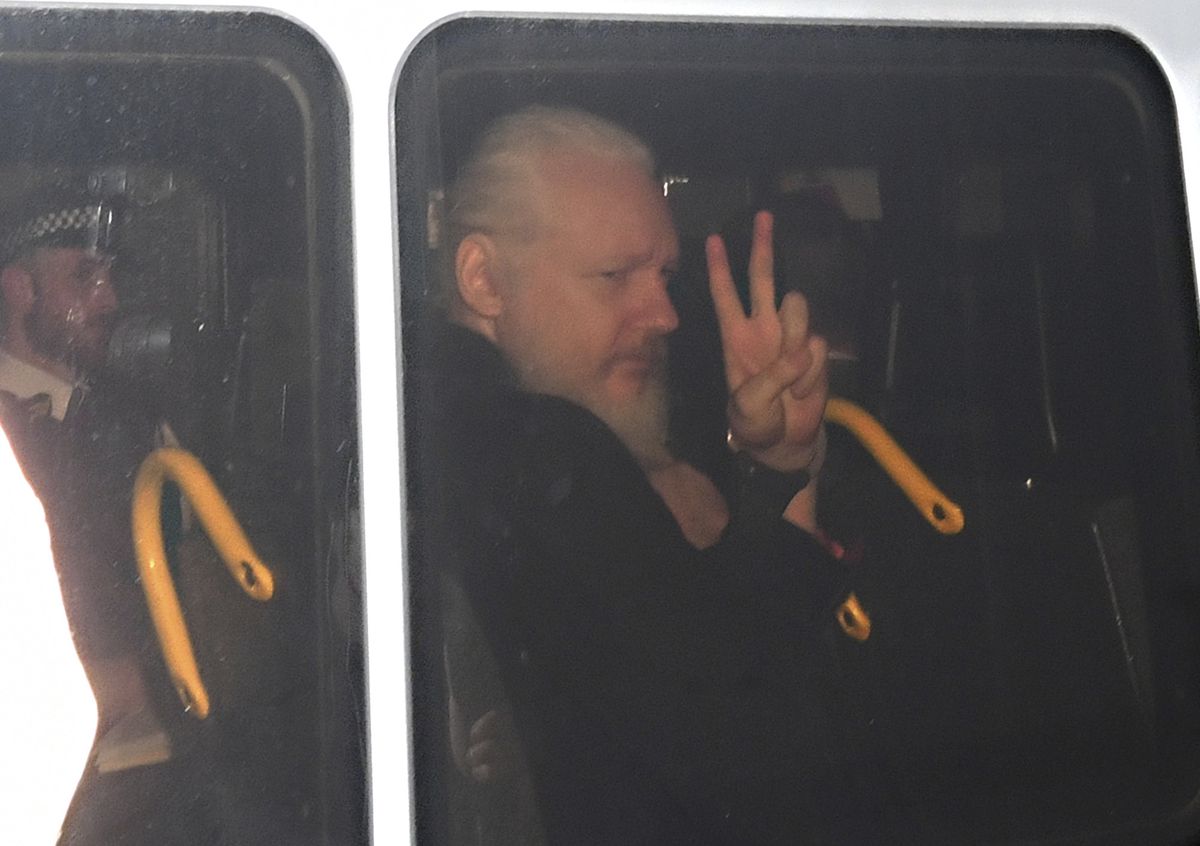 Julian Assange gestures as he arrives at Westminster Magistrates' Court in London, after the WikiLeaks founder was arrested by officers from the Metropolitan Police and taken into custody Thursday April 11, 2019. Police in London arrested WikiLeaks founder Assange at the Ecuadorean embassy Thursday, April 11, 2019 for failing to surrender to the court in 2012, shortly after the South American nation revoked his asylum .(Victoria Jones/PA via AP)

Julian Assange gestures as he arrives at Westminster Magistrates' Court in London, after the WikiLeaks founder was arrested by officers from the Metropolitan Police and taken into custody Thursday April 11, 2019. Police in London arrested WikiLeaks founder Assange at the Ecuadorean embassy Thursday, April 11, 2019 for failing to surrender to the court in 2012, shortly after the South American nation revoked his asylum .(Victoria Jones/PA via AP)

The new charges dramatically raise the stakes of the case both for Assange and the news media, raising questions about the limits of the First Amendment and protections for publishers of classified information.

Assange was previously indicted by a U.S. grand jury over his interactions in 2010 with Chelsea Manning, the former Army intelligence analyst who shared hundreds of thousands of classified war logs and diplomatic papers with WikiLeaks. If convicted, Assange would face a maximum of five years in prison under that conspiracy charge. The new charges carry with them a maximum possible sentence of 170 years in prison.

The new charges against Assange carry potential consequences not just for him but for others who publish classified information, and they could lead to a change in the delicate balance in U.S. law between press freedom and government secrecy. They also raises fresh questions about whether the British courts will view the new charges as justified and worthy of extradition.

Prosecutors say in the new indictment that Assange and WikiLeaks "repeatedly encouraged sources with access to classified information to steal it" and give it to the anti-secrecy organization, posting on its website a "most wanted" list for leaks organized by country and saying the documents must be "likely to have political, diplomatic, ethical or historical impact on release." They said Manning responded to that clarion call, downloading nearly four government databases of war reports, Guantanamo Bay detainee assessments and State Department cables, and turned them over to WikiLeaks.

The disclosures, prosecutors alleged, contained the names of local Afghans and Iraqis who had given information to the U.S., as well as other confidential sources for the U.S. government. They said the releases "put innocent people in grave danger simply because they provided information to the United States."

Prosecutors seemed to distinguish Assange from a traditional publisher because of his directions to Manning. They alleged, as they had previously, that Assange agreed to help Manning crack a password that might have helped cover their tracks - though the effort was apparently unsuccessful.

In the past decade, prosecutors have increasingly used the Espionage Act to pursue government employees or ex-employees who leak classified information to reporters. The law was originally written during World War I to target spies and traitors, and it has been used intermittently since, including when the government prosecuted the source of the so-called Pentagon Papers during the Vietnam War.

First Amendment advocates have expressed concerns that prosecuting Assange could set a dangerous precedent. President Barack Obama's administration declined to charge Assange with a crime out of concern that it would be too difficult to distinguish WikiLeaks from a news organization.

Floyd Abrams, an expert in First Amendment law, previously told The Washington Post that the 101-year-old act has long been viewed by press advocates as a "perpetually loaded gun that could too easily be aimed at the press, with ultimately Supreme Court interpretation unpredictable."

"If it violated the Espionage Act for WikiLeaks to gather information from sources not permitted to release it and then publish it, then what American newspaper could be free from risk?" said Abrams, who practices at Cahill Gordon & Reindel in New York.

Under President Donald Trump, the Department of Justice revived its Assange investigation, but when the WikiLeaks founder was charged under seal in 2017, it was with a narrow complaint that sidestepped such concerns by focusing on a single incident of attempted hacking.

Assange is in jail in London, where he was arrested in April. The U.S. government has until June 11 to deliver to Britain its case for extradition, a process that could take months or years and could be complicated by a rape allegation against Assange in Sweden. Assange, 47, has said he plans to fight efforts to bring him to the United States to face the criminal allegations, filed in federal court in Alexandria, Virginia.

Once the formal extradition request is made by the U.S., new charges cannot be filed against him by the Justice Department.

Special Counsel Robert Mueller investigated WikiLeaks and its publication of Democratic National Committee emails stolen by the Russian government in 2016. He charged Trump associate Roger Stone with lying to investigators about his attempts to learn more about Assange's plans for those emails. But the charges against Assange do not touch on that activity.

According to that indictment, Assange agreed to help Manning, known then as Bradley Manning, crack a password so the Army private could anonymously access Defense Department data.

At the time, Manning said she had already shared with WikiLeaks "all i really have got left," according to the indictment.

"The factual allegations against Mr. Assange boil down to encouraging a source to provide him information and taking efforts to protect the identity of that source," Assange's defense attorney Barry Pollack said when that charge was unsealed.

Seven years ago, while out on bail after being arrested to answer sexual assault allegations in Sweden, Assange sought asylum in Ecuador's London embassy. The Ecuadorian Embassy expelled him in April, leading to his arrest and the unsealing of the initial U.S. indictment.

He was sentenced to 50 weeks behind bars for absconding while on bail. Swedish authorities have reopened the rape case against him, which could delay U.S. extradition. Assange denies the allegations.

She told the judge she “would rather starve to death” than testify.