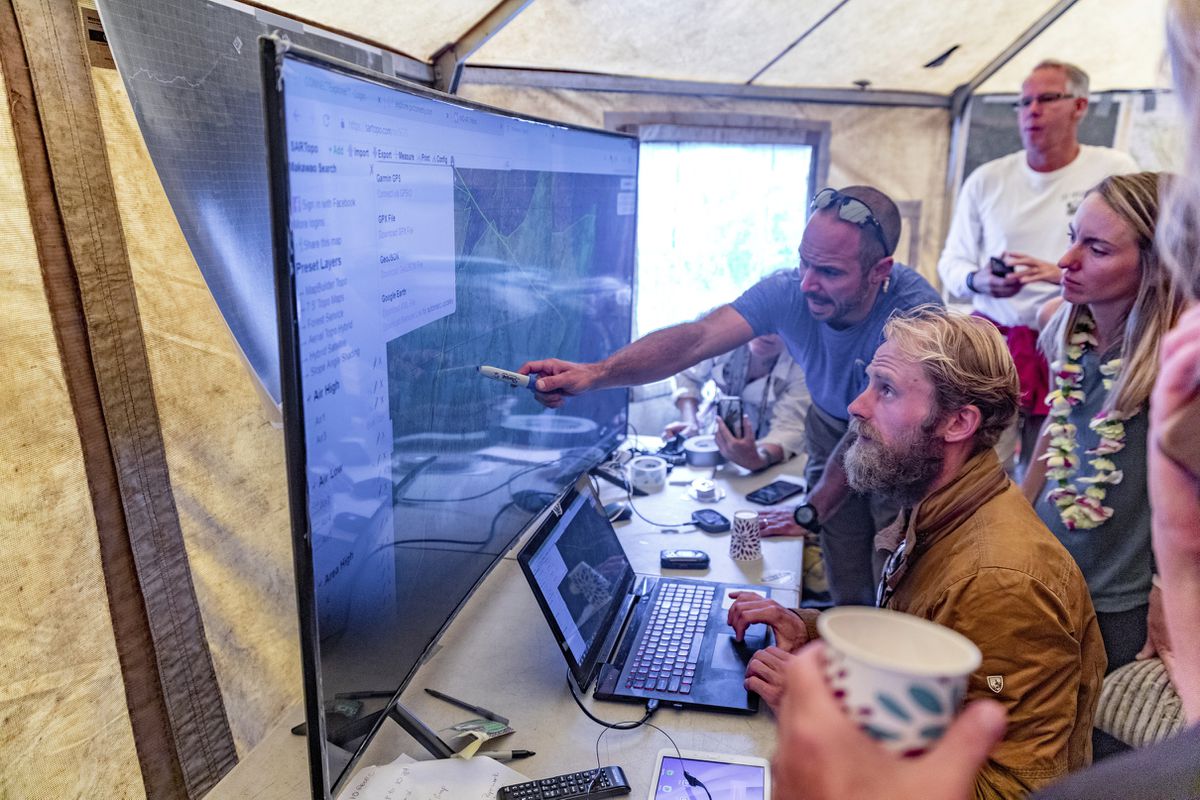 Rescue leads Javier Cantellops, top, and Chris Berquist show some of the technology used for the search of Amana Eller at the Makawao Forest Reserve base camp on Saturday, May 25, 2019 in Wailuku, Maui. The Maui News reported Friday Amanda Eller was found injured in the Makawao Forest Reserve. Family spokeswoman Sarah Haynes confirmed she spoke with Eller's father John. Eller was airlifted to safety. (Bryan Berkowitz/Honolulu Star-Advertiser via AP)

Rescue leads Javier Cantellops, top, and Chris Berquist show some of the technology used for the search of Amana Eller at the Makawao Forest Reserve base camp on Saturday, May 25, 2019 in Wailuku, Maui. The Maui News reported Friday Amanda Eller was found injured in the Makawao Forest Reserve. Family spokeswoman Sarah Haynes confirmed she spoke with Eller's father John. Eller was airlifted to safety. (Bryan Berkowitz/Honolulu Star-Advertiser via AP)

KAHULUI, Hawaii - The helicopter buzzed over the forest canopy. Three searchers peered into dense foliage and rolling waterfall beds as they watched their fuel dwindle. It would soon be time to turn back and end the 16th day of the search for Amanda Eller, led in part by a recently unemployed arborist.

Search coordinator Chris Berquist was fired from his day job just a few days into the rescue operation. He said his boss was frustrated with the time he spent on the search, organizing a battalion of volunteers devoted to finding the missing hiker in Hawaii's Makawao Forest Reserve. He didn't have the paycheck, but it freed up Berquist to lead the effort.

Berquist, along with Javier Cantellops and Troy Helmer, were scanning the forest from about 150 feet above, over roaring waterfalls and jagged cliffs. In a flash of human presence among the branches, Berquist made out a figure in faded yoga pants and a dirtied white shirt. Eller was waving, barefoot and ecstatic. The team had studied her face for days. They knew they found her.

"I've never met her before, but there was no mistaking that's who it was," Berquist told Maui Now.

The dramatic rescue of Eller, a 33-year-old Maui resident, physical therapist and yoga instructor, was fueled by the efforts of volunteers and organizers who braved the heat, wild animals and precarious terrain - and ultimately returned with Eller, shaken but alive.

Their effort began when Maui fire rescue personnel ended the official search on May 12, after hitting a 72-hour limit on missing-person assistance. Maui Fire Chief David Thyne did not return a request for comment asking about his department's role in search efforts after the time limit passed, though volunteers praised their continued assistance and "behind the scenes" support.

The volunteer search started as a low-tech slog. Volunteers turned to crude “pirate maps”and unorganized guidance, according to Eller’s father. Days later, they were aided by GPS mapping and analysis tools that pointed them toward the most promising areas to search.

Eller, a physical therapist and yoga instructor, got turned around on a hiking trail and lost in the reserve carved into the northwest slopes of the Haleakala volcano thick with tropical ash, bushy ferns, bamboo and massive rotting trunks. She fractured her leg on the third day, ate moths and unknown plants and covered herself in leaves for warmth.

She slept in a wild boar's den one night.

Meanwhile, volunteers faced the same conditions as they searched. They took time off to help comb through much of the reserve's 2,000 acres. Coordinators like Berquist ferried them into the jungle, where they braved a relentless sun, flooding rivers and unforgiving terrain that they took head on with the business end of machetes. They picked through the intestines of the boars they slew to look for human remains.

The pressures weighed on volunteers, Berquist told The Washington Post.

"As time pushes on in a search, it's natural for people to lose a little bit of faith," he said. "It starts to play with your mind the longer you're out there and not finding her."

Coordinators set up a yurt in a parking lot, where volunteers, sometimes numbering 150 in a day, received their orders based on ability and skill.

Those who could not hike ran tables at the base camp where nurses were on stand by. Experienced backcountry hikers fanned deep into the bush. Drone operators took to the skies, and hunters, rock climbers and rappellers carved out terrain to search.

"The terrain there is pretty rough, there are a lot of trees down and a lot of confusing side trails," said Elena Pray, a rappelling guide on Maui who volunteered for nearly the entire search effort.

Berquist, who said he had experience with EMS operations and cave rescues, warned each of them to be careful. "We don't need any more victims," he told one group.

John Eller, the chief executive of a telematics company, introduced a search interface that allowed volunteers to log via their smartphones where they already looked. When they returned to camp, they handed over their own GPS data to coordinators, which then colored in swaths of a map and revealed which areas still needed to be combed.

Spirits lifted when searchers glimpsed monitors and saw their efforts in real-time. It was paired with a data analysis of where missing persons are often located.

"We found out that more than 80 percent of people recovered are in drainages or creeks - and that's where we found her," Berquist said.

Amanda Eller's decisions imperiled her from the start.

She left her water and phone at her car, thinking they were unnecessary for a three-mile hike. She said in an interview that her "gut instinct" drew her in one direction that led her deeper into the forest. She fell off a cliff and fractured her leg. Her shoes were lost in a flood. And on several occasions, Eller heard helicopters buzzing overhead but couldn't reach them.

"There were times of total fear, and loss and wanting to give up," Eller said in a video statement from her hospital bed after the rescue. "It came down to life and death. And I chose life."

Data, and some luck, led Berquist, Helmer and Cantellops to Eller on Friday.

Research pointed to waterfall beds and rivers as likely places Eller would take refuge. With fuel supplies low, Berquist spotted Eller near a waterfall and signaled to her that they were there for the rescue and not some oblivious, waving tourists, he told Maui Now.

"There is no professionalism at this point," Berquist said, describing their emotions upon seeing her. "We're just trying to get to her."

The helicopter, which was contracted and paid for through donations, landed on a plateau. The team fought through thick grass to cut a path to Eller. Cantellops, who had previously met her, called out. He nearly fell off a cliff, Berquist said. Then he shouted again for Eller, asking if she recognized his voice.

"Javi?" Eller called back. Cantellops was the first to reach her and snapped selfies and video before a rescue helicopter hoisted her up in a basket. Then it did the same for the rescuers. For the first time in more than two weeks, they could enjoy the beautiful island view as it whirred by.

"It didn't feel wrong to be enjoying that," Berquist said.

Recovering from dehydration, a broken leg and badly blistered leg wounds, Eller praised the search effort. "This was all about us coming together for a greater purpose of community and love, and appreciation for life," she said.

Eller's father said he would harness the lessons and technology to create software that could be utilized to find lost hikers in the future, and Berquist agreed it was a model that could be scaled up.

"We're going to make sure this is a well-oiled machine," he said, "and doesn't take 15, 16 plus days to find someone next time."

Cantellops said the team was still elated Saturday afternoon. But the celebration was short-lived. He cut an interview short to hop on a helicopter with Berquist to search for Noah Mina, a hiker lost in Iao Valley.