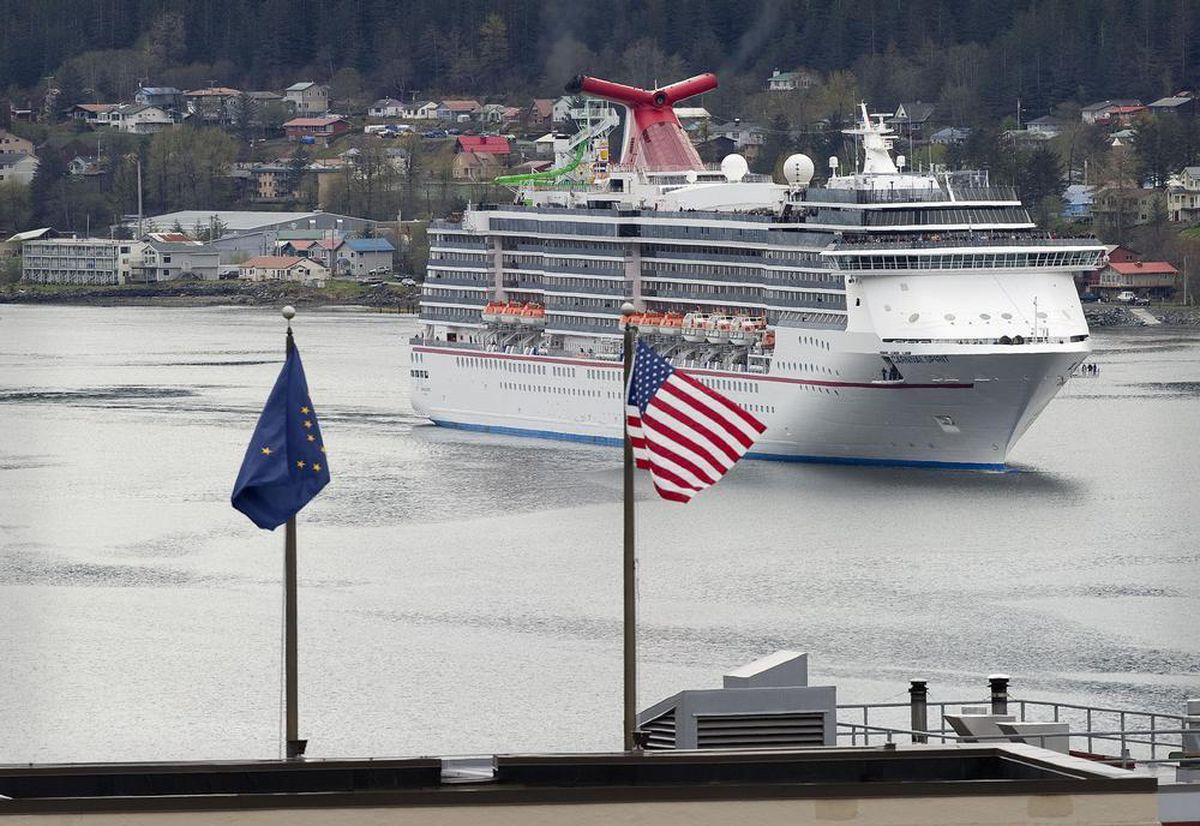 The Carnival Spirit cruise ship is seen through the national and state flag on top of the Alaska Capitol as the first ship of the season enters Juneau's downtown harbor on Thursday, May 3, 2012. (AP Photo/Michael Penn, Juneau Empire)

The Carnival Spirit cruise ship is seen through the national and state flag on top of the Alaska Capitol as the first ship of the season enters Juneau's downtown harbor on Thursday, May 3, 2012. (AP Photo/Michael Penn, Juneau Empire)

MIAMI -- Carnival Corp. pleaded guilty to six charges of violating probation as part of a settlement agreement Monday. The company will pay a $20 million fine and allow more stringent oversight during the remaining three years of probation.

The violations cited Monday are for falsifying training records, communicating with the U.S. Coast Guard through a back channel, failing to give enough authority to the company's environmental compliance officer, rushing to clean up ships ahead of visits by a court-appointed monitor, continuing to clean up ships ahead of auditor visits after the court ordered a stop to the practice, and dumping food waste mixed with plastic into Bahamian waters.

In a rare move, U.S. District Judge Patricia Seitz in Miami ordered top company executives -- including Chairman Micky Arison and CEO Arnold Donald -- to appear in court. Monday she opened the hearing by saying she wanted a commitment from executives to make preserving the environment a core and inherent value.

Four additional corporate board members and 16 leaders from all nine Carnival Corp. brands also were in the courtroom for the 3 1/2 hour hearing. Carnival Corp., the world’s largest cruise company, owns 105 ships. In fiscal year 2018, the company reported a profit of $3.2 billion.

Seitz said, "I am grateful to see that I finally -- hopefully -- have everyone's attention because this is a worldwide community responsibility and this company is in a perfect position to make a profound difference if it becomes their living, breathing core value. But somebody can only change if they want to change, but I'm here to assist if they don't."

Donald spoke on behalf of Carnival Corp. "I sincerely regret this case," he said. "In my role as CEO I do take responsibility for the problems we have. I am extremely disappointed that we've had them. I know you have reservations about our commitment and who we are. I want you to know we are fully committed." Donald was the only executive who spoke at the hearing.

"We understand that although we aspire to be perfect, mistakes will occur," Donald said. "We assure you we will remain transparent, learning from our mistakes so the same ones aren't repeated. We will continue to invest heavily in technology and training for us to meet and exceed the expectations we've set for ourselves."

Environmentalists and an Alaska fisherman had requested to be considered victims of Carnival Corp.'s actions. Prosecutors argued they didn’t qualify as victims under the Crime Victims Rights Act. Seitz agreed but offered their attorney, Knoll Lowney, the opportunity to speak.

Lowney suggested the court ban Carnival Corp. from cruising in Alaska's Glacier Bay and protected areas, require it to stop using single-use plastics, prevent it from burning of heavy fuel oil in North American waters and require an environmental auditor on every cruise. "That's how we're going to get these guys to shape up," he told Seitz.

Instead Seitz accepted the agreement. But she insisted that CEO Donald plead guilty on behalf of the company rather than the company designee from Princess Cruises.

Seitz said she is convinced that lower level employees are committed to protecting the environment after reviewing the court-appointed monitors' interviews with many of them. She asked prosecutors how she can impose a personal responsibility on Carnival Corp.'s executives.

"I am contemplating that if there is a future violation that we can attribute to them that there should be either penal or personal financial consequences," she said.

District Judge Ursula Ungaro, who will preside over the case after Seitz retires in September, had tough words for Peter Anderson, a consultant whom Carnival Corp. is considering for the new role of chief compliance officer.

"I feel like we're starting at square one, and this has been going on since 1993," Ungaro said, citing Princess Cruises' 1993 conviction for illegally dumping plastic bags filled with garbage overboard. (Carnival Corp. acquired Princess Cruises in 2003.) "This has been going on since 1993 and we're sitting here talking about food waste mixed with plastic, it's incredible. I hope you all appreciate that."

But Anderson said he is confident that the company is committed to improving its environmental record. "I genuinely believe ... that this company, that they have heard your lesson loud and clear," he said.

Federal prosecutor Richard Udell underscored that change must come from the top down.

Following the hearing, Carnival issued a statement saying in part, "Carnival Corporation remains committed to environmental excellence and protecting the environment in which we live, work and travel. Our aspiration is to leave the places we touch even better than when we first arrived."

As part of the 2016 conviction, Carnival Corp. began serving a five-year probation in April 2017.

A deal on the probation violation was announced in May, but details were not revealed until Monday. The arrangement requires Carnival Corp. to pay a fine of $20 million and allow more stringent oversight by the court-appointed monitors during its third, fourth and fifth years on probation. The company must record the location of its environmental violations. It also requires Carnival Corp. to develop an action plan for compliance and create a Chief Compliance Officer position. The company must increase budgetary resources for the existing Corporate Compliance Manager, Chris Donald, and the power to direct changes across the brands. If the company misses certain deadlines, it will be fined up to $1 million per day, and up to $10 million per day if it misses the deadlines by 10 days.

Under the deal, Donald must personally accept responsibility for the violations in a statement to employees vetted by the court. The company also agreed to reduce its use of single-use plastics by 50 percent by Dec. 31, 2021, and commit $20 million to improve food waste management on its ships, although the deal does not make clear how those items will be enforced.