Arrests along Mexico border surged again in May, blowing past ‘breaking point’ 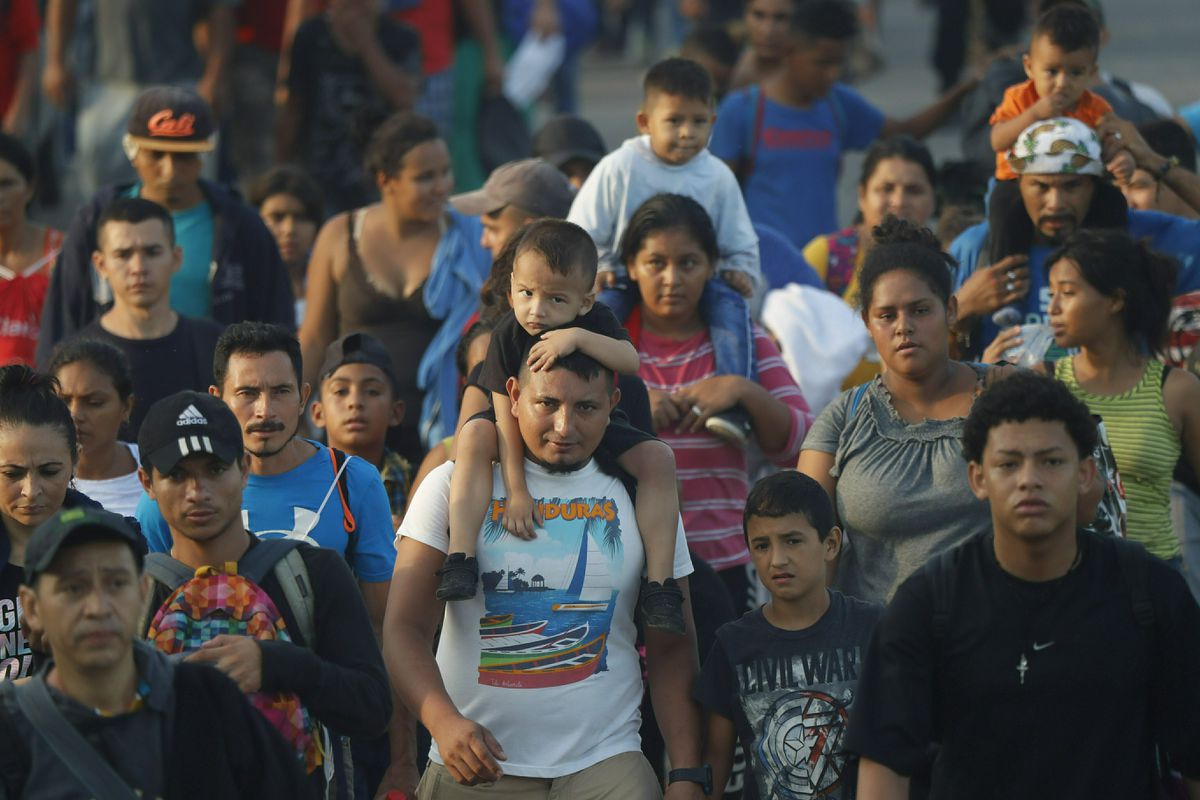 Hundreds of Central American migrants walk together on the highway, after crossing the Guatemala – Mexico border, near Ciudad Hidalgo, Mexico, Wednesday, June 5, 2019. State and local police provided a security escort to the migrants as they walked along a highway leading from the border to the first major city in Mexico, Tapachula. (AP Photo/Marco Ugarte)

Hundreds of Central American migrants walk together on the highway, after crossing the Guatemala – Mexico border, near Ciudad Hidalgo, Mexico, Wednesday, June 5, 2019. State and local police provided a security escort to the migrants as they walked along a highway leading from the border to the first major city in Mexico, Tapachula. (AP Photo/Marco Ugarte)

WASHINGTON - The Central American migration boom that has swamped U.S. authorities grew even larger in May, according to U.S. Customs and Border Protection statistics released Wednesday that show more than 144,000 migrants were taken into custody, a 32% jump from April.

It was by far the largest one-month arrest total since President Donald Trump took office, and it was the highest monthly figure in 13 years, CBP officials said Wednesday afternoon.

May was the third month in a row that border detentions topped 100,000, led by record-breaking levels of illegal crossings by Guatemalan and Honduran parents bringing children. CBP officials told reporters that agents and officers detained more than 100,000 family members and children, leaving holding cells "bursting at the seams."

Of the 144,278 taken into CBP custody, 132,887 were apprehended after crossing illegally by Border Patrol agents, and 11,391 were deemed "inadmissible" after arriving at U.S. ports of entry.

"We are in a full-blown emergency, and I cannot say this stronger: The system is broken," said acting CBP Commissioner John Sanders.

Sanders said his agency has detained more than 680,000 border crossers in the past eight months, noting that the total is "more than the population of Miami."

Most parents who arrive with children are quickly processed and released into the U.S. with a court appointment, a practice homeland security officials characterize as a loophole that the migrants are exploiting to gain easy entry to the country. Trump administration officials want lawmakers to give them the authority to detain parents and children long enough to process their immigration cases, rather than continuing the releases they say have become the biggest "pull factor" for unauthorized migration.

The historic surge has become a source of incessant frustration for Trump, whose administration has tried to deter the migrants with ever-harsher enforcement tactics.

Having already fired most of the leadership of the Department of Homeland Security, Trump last week returned to another frequent target for blame, the government of Mexico, threatening to add tariffs on imported goods.

Mexican diplomats are in Washington this week, trying to change Trump’s mind, but the president’s 5% tariff on Mexican imports is due to take effect on Monday unless Congress blocks him.

CBP officials described in detail the strains of the migration wave on U.S. agents and infrastructure, and they discussed the deteriorating conditions at U.S. border stations that are many times beyond their detainee capacity.

The agency has more than 19,000 migrants in custody, officials said, leaving Border Patrol holding cells so packed that detainees spend days in dirty, cramped conditions, sometimes without enough floor space to lie down, while waiting to be processed.

"I've never seen anything like this in the 24 years I've been doing this job," said Brian Hastings, the Border Patrol's operations chief.

Arrests by the Border Patrol peaked at 1.6 million in 2000, but in that era, the majority of those arrested were adult males from Mexico who could be quickly deported.

Now an unprecedented share are Central American families and children who cannot be easily sent back. Acccording to Homeland Security figures, 98% of the families who were taken into custody along the border in 2017 remain present in the United States.

Children who arrive with or without a parent accounted for nearly 40% of CBP apprehensions in May, the latest figures show.

CBP officials say Border Patrol agents now spend 50% of their time processing migrants and caring for families in custody, including frequent trips to hospitals and clinics. U.S. authorities say the burden has been a boon to drug traffickers and human smugglers who aim to sneak past U.S. defenses, particularly when hundreds of migrants cross the border at the same time.

Last week in El Paso, Texas, a single-file procession of 1,045 people crossed through the Rio Grande to surrender to U.S. agents, the largest group the Border Patrol has ever encountered.