US blames Iran for attacks on oil tankers near Persian Gulf 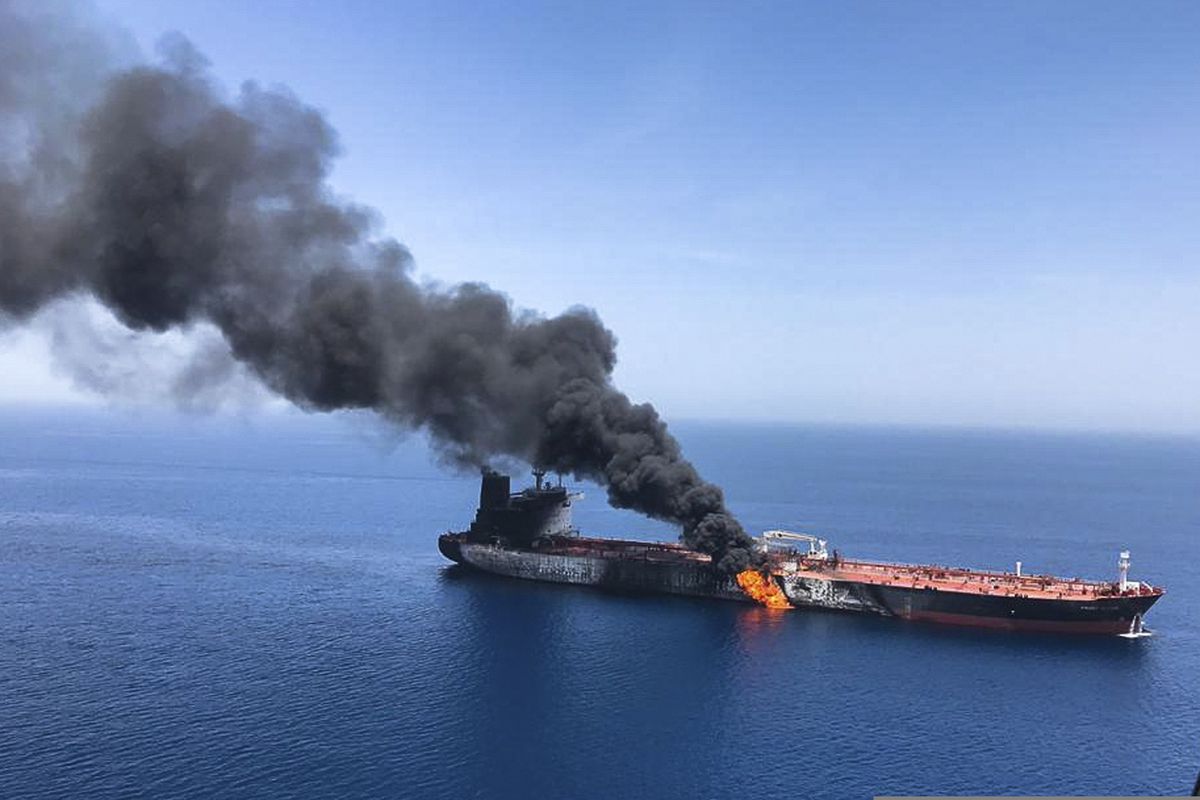 An oil tanker is on fire in the sea of Oman, Thursday, June 13, 2019. Two oil tankers near the strategic Strait of Hormuz were reportedly attacked on Thursday, an assault that left one ablaze and adrift as sailors were evacuated from both vessels and the U.S. Navy rushed to assist amid heightened tensions between Washington and Tehran. (AP Photo/ISNA)

An oil tanker is on fire in the sea of Oman, Thursday, June 13, 2019. Two oil tankers near the strategic Strait of Hormuz were reportedly attacked on Thursday, an assault that left one ablaze and adrift as sailors were evacuated from both vessels and the U.S. Navy rushed to assist amid heightened tensions between Washington and Tehran. (AP Photo/ISNA)

DUBAI, United Arab Emirates — Two oil tankers came under a suspected attack Thursday near the strategic Strait of Hormuz, with one of them set ablaze, and the U.S. blamed Iran in what it called a campaign of “escalating tensions” in a region crucial to global energy supplies.

The U.S. Navy rushed to assist the stricken vessels in the Gulf of Oman off the coast of Iran. The ships' operators offered no immediate explanation on who or what caused the damage against the Norwegian-owned MT Front Altair and the Japanese-owned Kokuka Courageous. Each was loaded with petroleum products, and the Front Altair burned for hours, sending up a column of thick, black smoke.

U.S. Secretary of State Mike Pompeo said the U.S. assessment of Iran's involvement was based in part on intelligence as well as the expertise needed for the operation. It was also based on recent incidents in the region that the U.S. also blamed on Iran, including the use of limpet mines to attack four oil tankers off the nearby Emirati port of Fujairah and the bombing of an oil pipeline in Saudi Arabia by Iranian-backed fighters in May, he said.

"Taken as a whole these unprovoked attacks present a clear threat to international peace and security, a blatant assault on the freedom of navigation and an unacceptable campaign of escalating tension by Iran," Pompeo said. He provided no evidence, gave no specifics about any plans and took no questions.

At the United Nations, the United States asked for closed Security Council consultations on the tanker incidents later Thursday.

Iran denied being involved in the attacks last month and its foreign minister called the timing of Thursday's incidents suspicious, given that Japanese Prime Minister Shinzo Abe was meeting Supreme Leader Ayatollah Ali Khamenei in Tehran.

Pompeo noted that Abe had asked Iran to enter into talks with Washington but Tehran “rejected” the overture.

"The supreme leader's government then insulted Japan by attacking a Japanese-owned oil tanker just outside Iranian waters, threatening the lives of the entire crew, creating a maritime emergency," Pompeo added.

Iran previously used mines against oil tankers in 1987 and 1988 in the "Tanker War," which saw the U.S. Navy escort ships through the region. Regardless of who is responsible, the price of a barrel of benchmark Brent crude spiked as much as 4% immediately after the attack, showing how critical the region remains to the global economy.

"The shipping industry views this as an escalation of the situation, and we are just about as close to a conflict without there being an actual armed conflict, so the tensions are very high," said Jakob P. Larsen, head of maritime security for BIMCO, the largest international association representing ship owners.

The suspected attacks occurred at dawn Thursday about 40 kilometers (25 miles) off the southern coast of Iran. The Front Altair, loaded with naphtha from the United Arab Emirates, radioed for help as it caught fire. A short time later, the Kokuka Courageous, loaded with methanol from Saudi Arabia and Qatar, also called for help.

The U.S. Navy sent a destroyer, the USS Bainbridge, to assist, said Cmdr. Joshua Frey, a 5th Fleet spokesman. He described the ships as being hit in a "reported attack," without elaborating.

In Washington, senior U.S. officials said the U.S. had photographed an unexploded mine on the side of one of the tankers. The officials, who spoke on condition of anonymity to discuss the sensitive matter, said the U.S. will reevaluate its presence in the region and is considering a plan to provide military escorts for merchant ships.

Frontline, the firm that operates the Front Altair, told The Associated Press that an explosion was the cause of the fire. Its crew of 23 — from Russia, the Philippines and Georgia — was safely evacuated to the nearby Hyundai Dubai vessel, it said.

BSM Ship Management said the Kokuka Courageous sustained hull damage and its 21 Filipino sailors had been evacuated, with one suffering minor injuries. All 21 were placed aboard the Bainbridge, according to Lt. Col. Earl Brown, a spokesman for the U.S. Central Command.

Earlier, Iranian state television said 44 sailors from the two tankers were transferred to an Iranian port in the southern province of Hormozgan. The discrepancy could not be immediately reconciled.

The Front Altair had been bound for Taiwan, the Kokuka Courageous for Singapore, according to the data firm Refinitiv.

The fact that both vessels remained afloat suggested mines may have damaged them, Larsen said.

"Judging from the damage, it doesn't look like a torpedo, it looks like something smaller, whether that is a vessel-borne improvised explosive device or even a limpet mine," he told the AP.

According to a U.S. official, initial evidence suggested the attack against the Kokuka Courageous was conducted by Iran with a mine similar to what was used against oil tankers off the UAE last month. The official, who declined to provide additional details or evidence, spoke on condition of anonymity in order to discuss initial findings that have not been made public.

Like in Fujairah, dozens of ships ranging from massive oil tankers to smaller pleasure boats, traditional dhows and cargo vessels ply the waters of the strait and the Gulf of Oman. The navies of Iran, Oman, the UAE and the U.S. regularly patrol, but the waters are vast and lit only by the moonlight at night, allowing small vessels to approach without warning.

Tensions have escalated in the Mideast as Iran appears poised to break the 2015 nuclear deal with world powers, an accord that President Donald Trump repudiated last year. The deal saw Tehran agree to limit its enrichment of uranium in exchange for the lifting of crippling sanctions. Now, Iran is threatening to resume enriching uranium closer to weapons-grade levels if European nations don't offer it new terms to the deal by July 7.

Already, Iran says it quadrupled its production of low-enriched uranium. Meanwhile, U.S. sanctions have cut off opportunities for Iran to trade its excess uranium and heavy water abroad, putting Tehran on course to violate terms of the nuclear deal regardless.

In May, the U.S. rushed an aircraft carrier strike group and other military assets to the region in response to what it said were threats from Iran.

After talks Wednesday with Iranian President Hassan Rouhani, Abe said any "accidental conflict" that could be sparked amid heightened between Washington and Tehran must be avoided.

His message came hours after Yemen's Iranian-backed Houthi rebels attacked a Saudi airport, striking its arrivals hall before dawn and wounding 26 people. A Saudi-led coalition has been fighting for over four years against the Houthis, whom United Nations experts and the West say receive arms from Iran. Tehran denies that.

A statement published by Khamenei's website after Abe's meeting with Khamenei suggested a tense exchange between the two.

"We have no doubt about your good will and seriousness, but ... I don't regard Trump as deserving any exchange of messages," Khamenei reportedly told Abe. Khamenei also said Iran remained opposed to building atomic weapons, but offered a challenge to Trump.

"You should know that if we planned to produce nuclear weapons, America could not do anything," said Khamenei, who has final say on all matters of state in Iran's Shiite theocracy.

Abe later told journalists he stressed with Khamenei that Trump wanted to de-escalate the tensions.

"I frankly told that to Supreme Leader Khamenei as my opinion," Abe said.