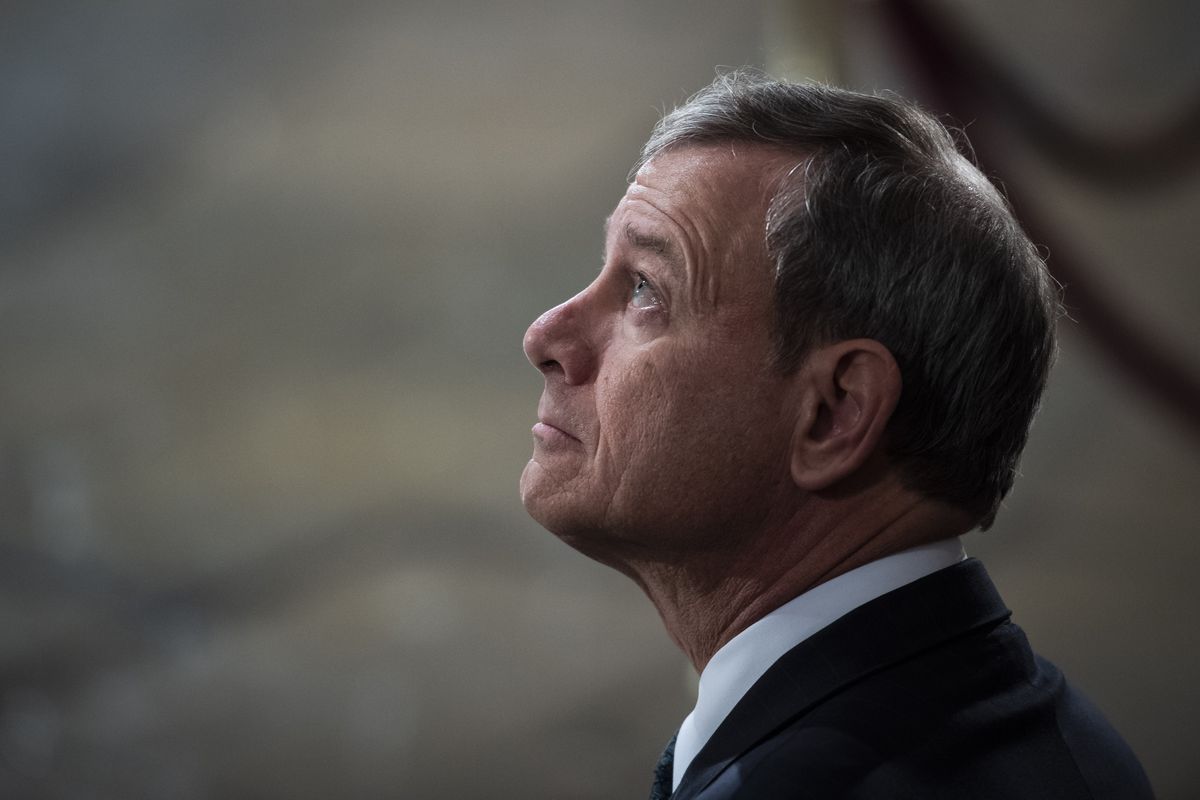 Chief Justice John Roberts Jr. began the Supreme Court's term last fall seeking to assure the American public that his court does not "serve one party or one interest."

He will end it playing a pivotal role in two of the most politically consequential decisions the court has made in years.

One initiative is to include a citizenship question in the 2020 Census, which has fueled a partisan showdown on Capitol Hill. The other could outlaw the partisan gerrymandering techniques that were essential to Republican dominance at the state and congressional level over the past decade.

The politically weighted decisions, by a court in which the five conservatives were chosen by Republican presidents and the four liberals were nominated by Democrats, threaten to undermine Roberts's efforts to portray the court as independent.

They are among two dozen cases the court must decide in the next two weeks, and never before has the spotlight focused so intently on the 64-year-old chief justice.

Roberts sits physically at the middle of the bench in the grand courtroom and now, for the first time since he joined the court in 2005, at the center of the court's ideological spectrum. With the retirement of Justice Anthony Kennedy last summer, the most important justice on the Roberts Court became Roberts himself.

Roberts in the past has shown himself to be far more conservative than Kennedy, and Justice Ruth Bader Ginsburg suggested recently that has not changed.

Kennedy's retirement, she told a group of judges and lawyers in New York, was "the event of greatest consequence for the current term, and perhaps for many terms ahead."

Roberts has been on a mission to convince the public that if the court is ideologically split, it is about law, not politics.

"We do not sit on opposite sides of an aisle, we do not caucus in separate rooms, we do not serve one party or one interest, we serve one nation," Roberts told an audience at the University of Minnesota in October.

He repeated the message at Belmont University in Nashville in February. "People need to know we're not doing politics," he said.

In between was the well-publicized spat with President Donald Trump, who just before Thanksgiving criticized an "Obama judge" serving on a lower court who had ruled against his administration in a contentious case centered on immigration policy and border security.

Roberts issued a rare public statement: "We do not have Obama judges or Trump judges, Bush judges or Clinton judges. What we have is an extraordinary group of dedicated judges doing their level best to do equal right to those appearing before them."

Trump shot back on Twitter: "Sorry Chief Justice John Roberts, but you do indeed have 'Obama judges,' and they have a much different point of view than the people who are charged with the safety of our country."

So the citizenship question and gerrymandering cases, which have generally split along party lines, do not come at an opportune time.

The battle for Roberts has been joined.

Brianne J. Gorod, chief counsel of the liberal Constitutional Accountability Center, said the many questions about whether Trump's citizenship question is intended to benefit Republicans should be a warning for Roberts.

"If Roberts votes to uphold this plainly unlawful administration action, it will give credence to Trump's claim that he can simply look to the conservative justices on the Supreme Court to save him," Gorod wrote on the Take Care blog.

"That would be a deeply troubling state of affairs - both for the court and for the country."

Lawyers challenging the census question seemed to make a similar overture in an unusual motion filed Wednesday, months after the case was argued.

They asked the court to either affirm lower courts that have ruled the question can't be added to the census form, or delay a ruling until those courts can examine new evidence about a Republican political operative's role in Commerce Secretary Wilbur Ross' decision to add the citizenship question, which critics contend is discriminatory, politically motivated and will result in a significant undercount of the nation's immigrant population.

"This court should not bless the secretary's decision on this tainted record, under a shadow that the truth will later come to light," they said.

The administration has said the new allegations are more like conspiracy theories than legal analysis. Conservatives said it was a familiar ploy to portray the court as apolitical only if one of the conservative members agrees with liberals, not the other way around.

"Whenever you read 'legitimacy' in a sentence about the court, you know it's a political missile aimed directly at Chief Justice John Roberts," wrote the conservative editorial board of the Wall Street Journal.

The focus on Roberts is unsurprising, said Curt A. Levey of the conservative Committee for Justice. Although the jury is still out on Trump appointee Brett Kavanaugh, the justice who replaced Kennedy, Roberts is the conservative most likely to be in play, Levey said.

"I think it is a predicament for him," Levey said. The chief justice is the member of the court most sensitive "to what history and the nightly news says about you."

Levey recently wrote that proposals from Democratic presidential candidates and members of Congress to restructure the Supreme Court - increasing the number of justices, for instance, or trying to impose term limits - are better seen as attempts to push Roberts to more moderate outcomes in the court's decisions.

"Such a shift, after all, is progressives' only real hope of avoiding a conservative majority," Levey wrote.

After arguments in the census case, it appeared the court's conservative majority would agree with the Trump administration that Congress has given it wide authority to add questions to the form.

Lawyers for the government said Ross considered objections from his own experts - who said the question would cause an undercount of those reluctant to disclose that noncitizens lived in their households - but decided the additional information would still be worth the risk.

Lower courts said Ross' stated reason for adding the question - that it would aid enforcement of the Voting Rights Act - was pretext. Challengers contended that adding the question would lead to undercounts in Democratic areas and be beneficial to future Republican redistricting plans. But the justices seemed more focused on whether Ross had the authority to add the question than his motivations.

But since those April arguments, the case has gotten only more political.

On Capitol Hill, the House Oversight Committee voted to hold Ross and Attorney General William Barr in contempt for not turning over documents about the administration's decision to add the question.

In the gerrymandering cases, the court's decision could have far-reaching results for how elections are conducted in the United States. The court often polices redistricting plans drawn by the states to ensure they do not discriminate based on race, but it has never found a plan so infected by politics that it violates voters' rights.

On the surface, a decision that courts have no role in trying to decide when there has been too much partisan interference would not help Republicans more than Democrats. The court is considering a North Carolina plan drawn by Republicans to give the party a huge edge, and a Maryland congressional district drawn by Democrats to oust a longtime Republican incumbent.

But as a practical matter, being able to draw districts to help the party in control currently benefits the GOP. The party is in control of both the governorship and legislature in 22 states, compared to 14 for Democrats.

Decisions in any of the 24 remaining cases on the court’s docket could come as soon as Monday.