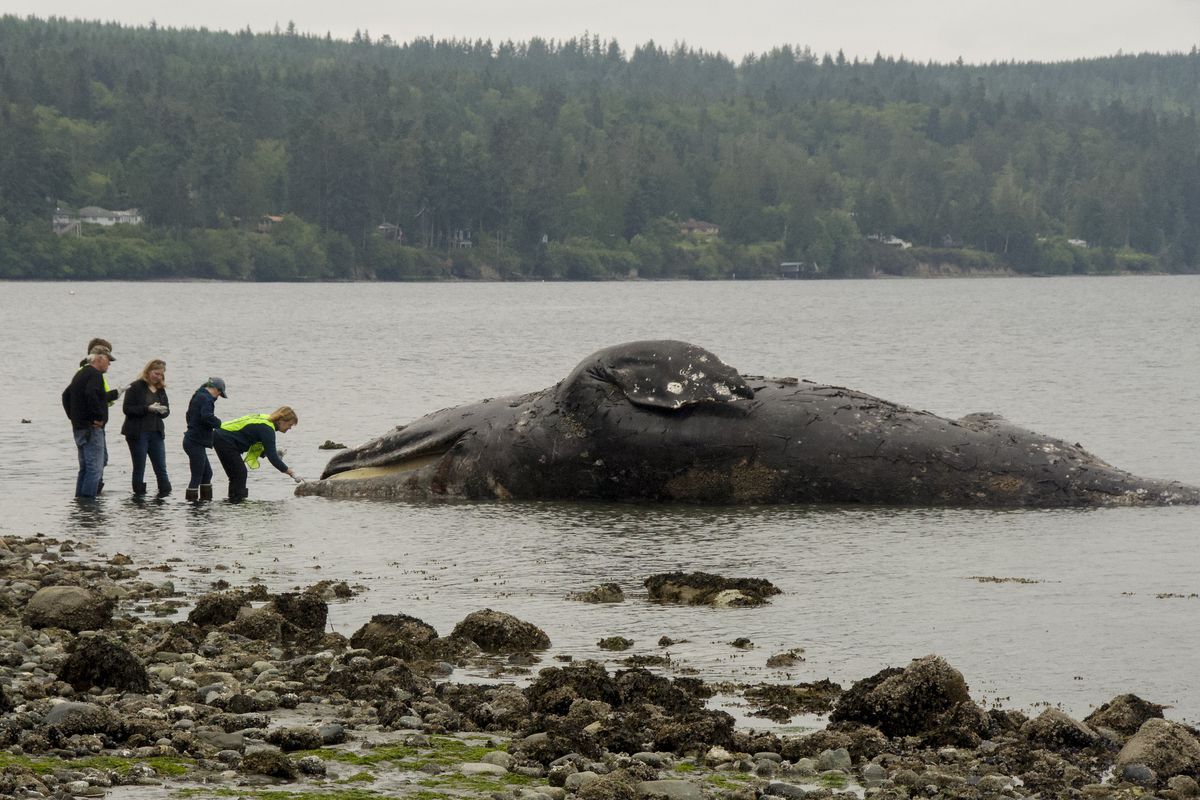 Officials examine a decomposing whale that washed ashore, Tuesday, May 28, 2019, in Port Ludlow, Wash. The National Oceanic and Atmospheric Administration is looking for private landowners who'd be willing to let a dead whale decompose on their property. The unusual request comes two weeks after the federal agency announced they would study what has caused 81 gray whales to wash up dead on beaches in Alaska, Washington, Oregon and California. (AP Photo/Mario Rivera)

Officials examine a decomposing whale that washed ashore, Tuesday, May 28, 2019, in Port Ludlow, Wash. The National Oceanic and Atmospheric Administration is looking for private landowners who'd be willing to let a dead whale decompose on their property. The unusual request comes two weeks after the federal agency announced they would study what has caused 81 gray whales to wash up dead on beaches in Alaska, Washington, Oregon and California. (AP Photo/Mario Rivera)

PORTLAND, Ore. — So many gray whales are dying off the U.S. West Coast that scientists and volunteers dealing with the putrid carcasses have an urgent request for coastal residents: Lend us your private beaches so these ocean giants can rot in peace.

The number of dead whales washing ashore in Washington state alone — 29 as of this week — means almost every isolated public beach has been used. Authorities are now scrambling to find remote stretches of sand that are privately owned, with proprietors who don't mind hosting a rotting creature that's bigger than a school bus and has a stench to match its size.

"The preferred option is, at all times, that they just be allowed to decompose naturally," said John Calambokidis, a research biologist with the Olympia, Washington-based Cascadia Research. "But it gets harder and harder to find locations where they can rot without creating a problem. This is a new wrinkle."

At least 81 gray whale corpses have washed ashore in California, Oregon, Washington and Alaska since Jan. 1. If tallies from Mexico and Canada are added, the number of stranded gray whales reaches about 160 and counting, said Michael Milstein, spokesman for NOAA Fisheries.

U.S. scientists last month declared the die-off an "unusual mortality event," a designation that triggered additional resources to respond to the deaths and launch an investigation.

The first private-beach owners to respond, a Washington state couple, received their carcass earlier this month. Volunteers with the so-called “stranding network” — a coalition of nonprofits, research institutions and government agencies — attached a rope to the dead whale’s tail and used a motorboat to tow it 3 miles along the coast to the couple’s beach, where they anchored it to tree stumps.

Mario Rivera and his veterinarian wife, Stefanie Worwag, asked their neighbor’s permission first and are using copious amounts of lime to speed decomposition and reduce the stench. They visit the carcass daily and consider it a scientific opportunity.

“It’s decomposing nicely. There’ve been a couple of days this week when I was out there mowing and I was like, ‘Oooph,’” Rivera said of smell from the 40-foot adult male whale sitting 150 yards from his house.

"But it's only temporary. It's only going to be smelling for about a month — and after that, the smell's gone."

Since the Port Townsend, Washington, couple welcomed the carcass, 15 more private individuals have signed on to do the same, mostly in remote areas around the Salish Sea in far northwest Washington state, Milstein said.

The number of dead whales found in Washington state this year has already surpassed the tally for 2000, when the last significant die-off of gray whales occurred on the West Coast. In Oregon, five dead gray whales have been documented as of this week, more than in all of last year. California has seen 37, and 10 have come ashore in Alaska.

Experts estimate the washed-up whales represent just 10% of the total number of the dead, with the rest sinking into the sea unnoticed by humans.

In past years, the majority of stranded whales were left to rot in place after necropsies were done. A few were buried, hauled to a landfill or sunk at sea. Towing them back out to sea isn't the preferred method because the bodies could wash up again or could cause problems if they float into shipping channels and collide with boats.

Officials have learned how not to dispose of whale carcasses from experience, including a 1970 attempt to blow up a dead sperm whale with dynamite in Oregon. The blast sent chunks of burning, rotting blubber raining down on spectators, and several cars in a nearby parking lot were crushed by blobs of putrid flesh.

Now, it’s about “getting people to step up and say, ‘Yeah, we can take these animals and have them on our beach,’” said Betsy Carlson, the citizen science coordinator for the Port Townsend Marine Science Center.

"There's such sadness in them just washing up on the shores and seeing these big, majestic animals there."

It's a disappointing twist in what is otherwise considered a success story for species recovery.

The eastern North Pacific gray whales were removed from the endangered species list in 1994, after rebounding from the whaling era. The population has grown significantly in the past decade and is now estimated at 27,000 — the highest since surveys began in 1967.

But that has raised questions about whether their population has reached the limit of what the environment can sustain, causing a rash of starvation. Another theory cites the loss of Arctic sea ice due to global warming.

The whales spend their summers in the Arctic feeding on tiny shrimp-like, bottom-dwelling creatures called amphipods before migrating 10,000 miles to winter off Mexico, where the females give birth. Though they eat all along their route, they are typically thinning by the time they return north along the West Coast each spring.

Although scientists are far from an answer about the die-off, whale expert Calambokidis wonders if fluctuations in the food supply because of global warming are having an outsized impact on the whales because their population has increased.

"It isn't like there are twice as many gray whales this year as there were last year," he said. "The increases (in numbers) are small, so why would you expect this huge jump in deaths? There has to be some other variable."

The whales that have washed up this year are emaciated, and scientists have also noted that whales migrating north are showing up in places they wouldn't normally venture, such as the Ports of Los Angeles and Long Beach, California, or San Francisco Bay. That leads researchers to wonder if the gigantic mammals are veering off course in a desperate bid to find food far south of where they usually fatten up in the late summer months.

The dead whale Rivera and Worwag have on their beach had a stomach full of eel grass, far from its normal diet. A necropsy showed the adult male starved to death.

“This whale was desperation feeding,” said Rivera. “It’s like a starving human eating grass to stay alive. It just can’t.”