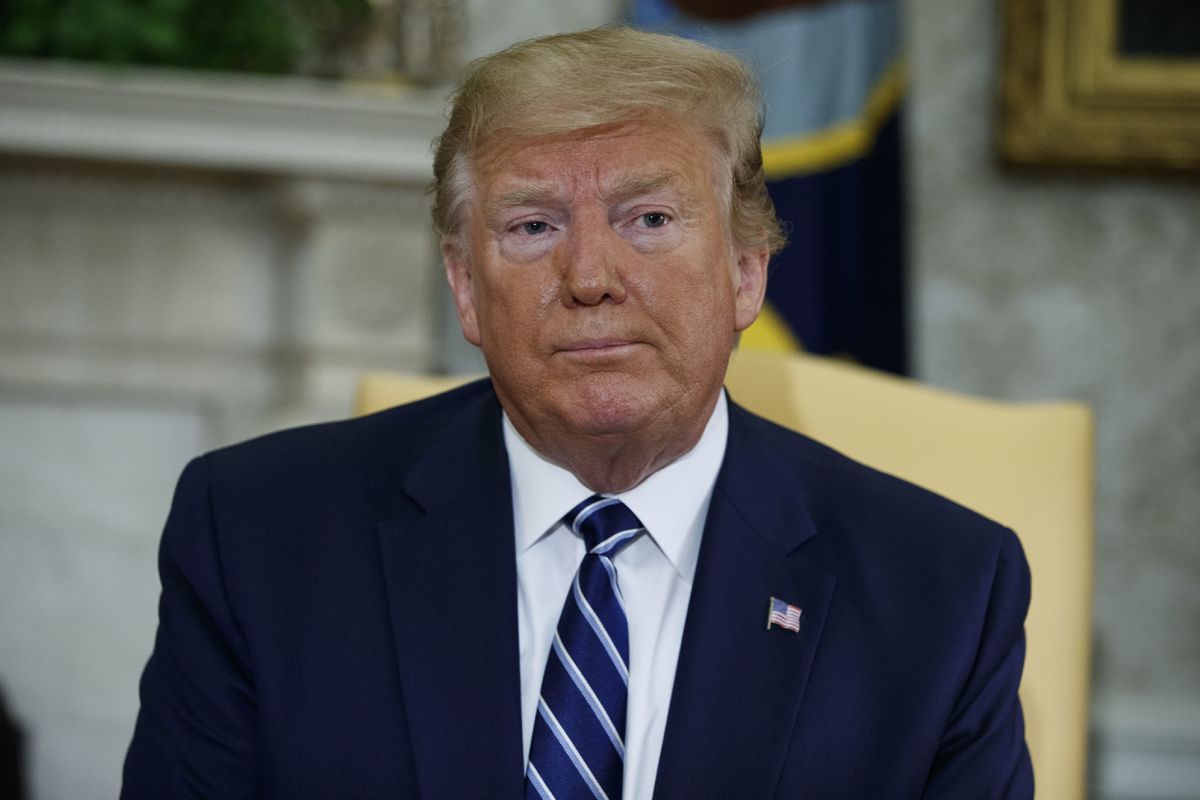 President Donald Trump listens to a question during a meeting with Canadian Prime Minister Justin Trudeau in the Oval Office of the White House, Thursday, June 20, 2019, in Washington. (AP Photo/Evan Vucci)

President Donald Trump listens to a question during a meeting with Canadian Prime Minister Justin Trudeau in the Oval Office of the White House, Thursday, June 20, 2019, in Washington. (AP Photo/Evan Vucci)

During a sit-down interview with Time magazine, Trump showed the reporters a letter from North Korean dictator Kim Jong Un. When a photographer tried to take a photograph of the letter, White House press secretary Sarah Sanders told him he couldn't.

Later in the interview, the subject turned to special counsel Robert Mueller's report on Russian interference in the 2016 campaign. A reporter asked about sworn testimony that Trump tried to limit the investigation to only "future election meddling."

Rather than answer, Trump lashed out about the photographer's attempt to take a shot of the letter from Kim, according to a transcript of the interview that Time released Thursday night.

"Well, you can go to prison, instead, because if you use, if you use the photograph you took of the letter that I gave you . . ." Trump started.

When the Time reporter interjected to continue his line of questioning, Trump went on, "confidentially, I didn't give it to you to take photographs of it - so don't play that game with me."

"I'm sorry, Mr. President. Were you threatening me with prison time?" the reporter asked.

Trump didn't answer directly, but launched into a rant about Time's unfavorable coverage of him.

"So go have fun with your story," Trump said. "Because I'm sure it will be the 28th horrible story I have in Time magazine because I never, I mean, ha. It's incredible. With all I've done and the success I've had, the way that Time magazine writes is absolutely incredible."

Trump, who lashes out at the news media daily, is extra sensitive to Time magazine because he's long prided himself on being featured on its cover - this interview will mark his 29th cover story.

Trump has been so enamored with his own appearance in the national publication that he had a fake Time cover with his portrait and the headline: "Donald Trump: The 'Apprentice' is a television smash!" framed and hung in several of his golf clubs.

On Friday, Trump also weighed in on an email between a New York Times reporter and the FBI's director of public affairs that was obtained by the conservative watchdog group Judicial Watch. In the 2017 email, the reporter writes that his colleagues had learned in their reporting on the Russia investigation that the FBI was scrutinizing Trump's son-in-law and adviser Jared Kushner for meeting with Russians.

"Just revealed that the Failing and Desperate New York Times was feeding false stories about me, & those associated with me, to the FBI," Trump tweeted. "This shows the kind of unprecedented hatred I have been putting up with for years with this Crooked newspaper. Is what they have done legal?..."

Trump has made the news media a top adversary since his early days as a candidate, but only started tweeting about "fake news" and "enemy of the people" after he was elected. He's used derogatory terms for reporters, calling them "crazed lunatics" and "the opposition party."

This isn’t the first time Trump has suggested jailing journalists. Former FBI director James Comey recalled in a conversation with the president regarding leaks in the media that Trump said that one solution would be to have reporters “spend a couple days in jail, make a new friend and they are ready to talk.”