What the Space Age taught us: Earth is the best of all possible worlds 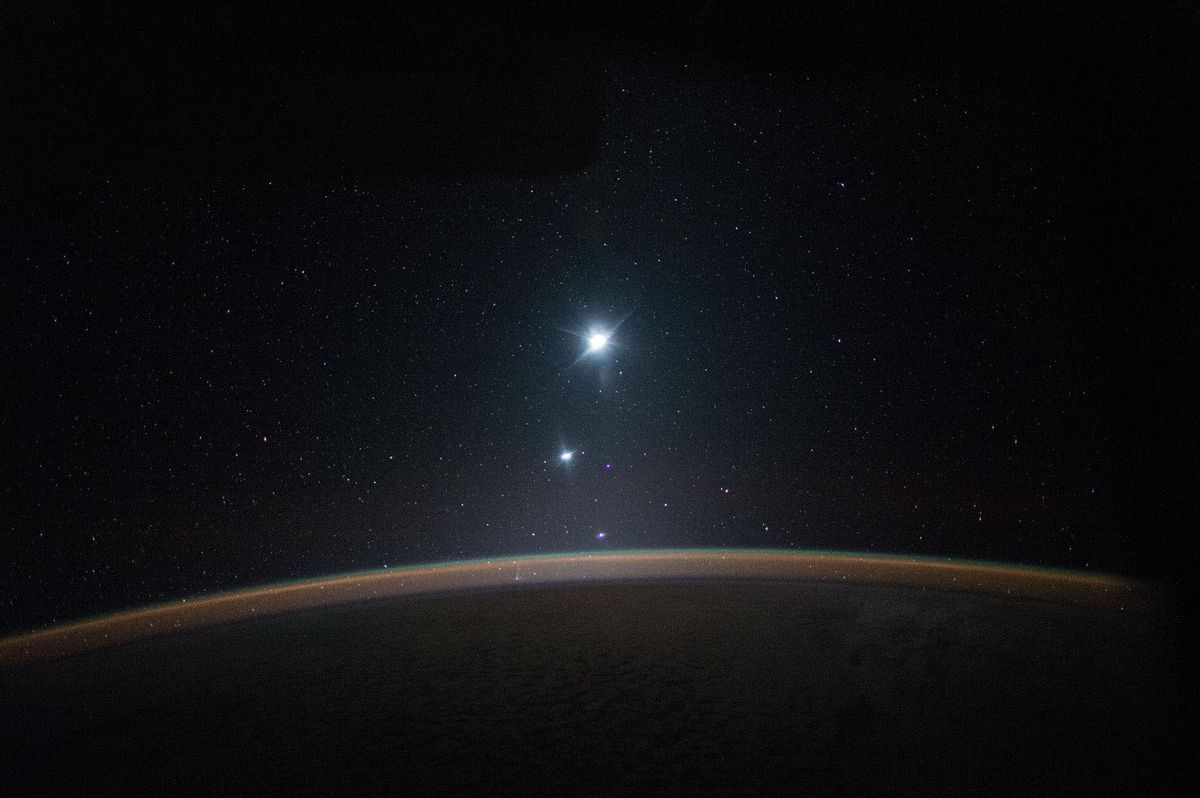 Mars was supposed to be next. Surely the moon was just a steppingstone in the conquest of space. For many people who came of age during the Apollo era, it seemed reasonable to assume that in short order the entire solar system would be our stomping ground. Eventually we’d be visiting stars. “Star Trek,” which debuted in 1966, seemed a plausible vision of human destiny.

Half a century after Apollo 11, we have been forced again and again to recalibrate our expectations.

The exploration of deep space by flesh-and-blood human beings no longer looks inevitable. It doesn't look especially affordable under plausible government budgets in the post-Space Race era, and private-sector dreams may never quite pencil out, as they say. Space travel remains dangerous; the catastrophic loss of two space shuttle crews proved that.

There's also been a more subtle revelation from half a century's experience with spaceflight. Going into space has given us a greater appreciation of our connection to the Earth.

How did NASA put men on the moon? One harrowing step at a time.

50 astronauts, in their own words

The human body goes haywire when hurled into space and away from the familiar environment of the Earth’s surface. We learned this by doing it. And our innate terrestrial nature is both biological and psychological: Astronauts in orbit spend a lot of their free time looking out the window, toward home.

Maybe the most important thing we've learned from the Space Age is that we're Earthlings.

When astronaut Scott Kelly went into orbit in 2015 for a nearly year-long mission, his immune system initially went bonkers. It acted as if under attack by a virus. At the cellular level, his body was screaming: Where's the gravity?

The fluids in his body wound up in the wrong places, an occupational hazard for astronauts. The effects include insomnia and blurred vision. And although his genetic code didn't change, his gene expression - the creation of proteins that are the workhorses of the body - did undergo pronounced changes, with some genes turning off and others turning on.

Astronauts adapt to zero gravity and perform their jobs well. But then they face another jolt when they return to Earth. Kelly suffered from painful rashes, swollen legs, nausea and flulike symptoms. His gene expression mostly returned to its normal state, but not entirely. Kelly said he didn't feel quite right for about eight months.

While Scott orbited the Earth, his twin brother, Mark, went about his business on the surface, pausing to let researchers sample his blood, urine, etc., for comparison with his sibling in space. NASA said its Twins Study revealed no showstoppers - nothing that would prevent an eventual human mission to Mars, the agency's long-term goal.

But the study provided a reminder that space travel is brutal on human bodies, which are adapted for life on this particular planet. Our bones lose density. Muscles can atrophy. Astronauts have to exercise two hours a day to keep from wasting away. We can live in space, but that environment doesn’t really agree with us.

"We are fairly exquisitely designed for this planet, and we're fairly fragile physiologically when you get off this planet," study co-author Christopher Mason, a geneticist at Weill Cornell Medicine, told The Washington Post.

In the Hollywood version of spaceflight, no one ever worries about the composition of the air in the spaceship. But as Scott Kelly can attest, the air in the International Space Station can be a bit off. Kelly says high levels of carbon dioxide can cause malaise, especially in areas of poor air circulation.

The Kelly brothers participated in a recent NASA-sponsored media teleconference to discuss the Twins Study, during which one of the researchers, Stuart Lee, said the air on the ISS "is very close to what we have on the ground." The CO2 levels, he went on, are 0.3% of the air, compared to about 0.03% on the Earth's surface.

Then there's radiation. Earth's magnetic field protects the ISS from much of the radiation of space. But an astronaut journeying to Mars would not have that protection and would be particularly vulnerable to "cosmic rays," which are elementary particles of galactic origin that travel at nearly the speed of light and could potentially cause cancer, genetic damage and acute radiation sickness.

Human psychology is another area of concern for NASA. Scott Kelly could look out a window and see the Earth. He could call home. He could be in touch, in real time. But a one-way trip to Mars using current technology would take at least six months - and probably longer. A radio signal between the spacecraft and the Earth would take minutes to travel across the interplanetary distances, rendering a normal conversation impossible. Boredom is a danger. So are interpersonal conflicts among crew members.

"It's a certainty when people go to Mars some of those people are going to suffer major psychiatric symptoms because that's just the nature of the way people are," said Twins Study co-author Andrew Feinberg of Johns Hopkins University.

A human being is a composite organism - a collaboration involving trillions of microbes, most of them residing in our gut. The microbes emerge from, and have intimate connections to, the Earth. Mars not only doesn't have the kind of air, water, gravity and radiation that we're used to, it also, almost surely, doesn't have the right kind of bacteria.

None of this prevents a human mission to Mars or other places in space. Never underestimate the ingenuity of future generations. But the greatest technological leaps since Apollo have occurred in the realm of 0's and 1's - the digital revolution. Robots do well in space. Any mission to the moon or Mars has to justify a human presence.

NASA plans to put another rover on Mars soon, one designed to obtain soil samples that can someday be sent back to Earth robotically. It's a scientific echo of what the Apollo astronauts did. The difference this time: No humans in the loop.

Alexa, bring us a Mars rock.

The most passionate advocates for space exploration say we have no alternative. They see it as an existential imperative, because bad things can happen to good planets (ask the dinosaurs that didn’t have a backup plan 66 million years ago when a giant rock hit the Earth). And humans could trigger their own demise: Someone could engineer a particularly bad germ. We’re already desperate to solve the climate crisis caused by human activity, and nuclear war remains a terrifying possibility.

The late Stephen Hawking was among the smart folks saying we need a fallback option. "Although the chance of disaster to planet Earth in a given year may be quite low, it adds up over time, and becomes a near certainty in the next 1,000 or 10,000 years," Hawking said, according to a November 2016 Newsweek article. "By that time, we should have spread out into space and to other stars, so a disaster on Earth would not mean the end of the human race."

Apollo 11 moonwalker Buzz Aldrin echoed that opinion in a recent op-ed in The Washington Post espousing "the great migration of humankind to Mars." He wrote that we have no alternative: "[H]uman nature - and potentially the ultimate survival of our species - demands humanity's continued outward reach into the universe. . . . We explore, or we expire."

Elon Musk, founder of SpaceX, has said that the central purpose of his company is to create a human civilization on Mars so that we can be a two-planet species. He is not talking about a mere Antarctica-style research outpost: He wants to build cities on Mars, a completely self-sustaining civilization, which would preserve humanity in case something dire happened to Earth.

Musk and his brilliant engineers have achieved great success with SpaceX and the electric car company Tesla, and so people once skeptical of Musk's bold talk tend to hedge their bets these days. Yes, he overpromises, but he is persistent.

Still, SpaceX and Musk can’t simply wave away the technological and budgetary challenges that have prevented NASA and every other space agency around the world from attempting a Mars mission. (Or maybe he can: When Musk was asked a couple of years ago about the radiation hazard in interplanetary space, he said he wasn’t worried about it. Problem solved!)

In 2017 President Donald Trump asked NASA's acting administrator if the agency could send humans to Mars by 2020. Answer: Not a chance.

Mars is not an object parked in space beyond the moon. In his book "The Moon," author Oliver Morton writes of the moon, "[It] is not just the nearest outpost of the elsewhere; it is also the furthest reach of here. It is in thrall to the Earth, its face cupped by the hands of gravity so strongly that it cannot turn its gaze away from ours." Mars, however, is in thrall to the sun. Mars can be as much as 249 million miles from Earth. Almost any conceivable mission to Mars requires something like a 500-day stay on the Red Planet before the orbits of the planets permit a journey home.

Although Musk sees Mars as a fixer-upper planet, it would require a heck of a lot of fixin'. That's the message from the other tycoon with a space company - Jeff Bezos, founder of Blue Origin and owner of The Washington Post. Bezos favors the gradual migration of heavy industry into space, so that Earth can become a protected sanctuary. He doesn't see Mars as a Plan B, saying in 2016: "Think about it: no whiskey, no bacon, no swimming pools, no oceans, no hiking, no urban centers. Eventually Mars might be amazing. But that's a long way in the future. This planet is incredible."

Scott Kelly has no delusions about Mars as a potential mulligan: "It will always be easier to take care of this planet than to make Mars into another Earth. It is not our lifeboat."

The great physicist Freeman Dyson once hypothesized that this is the most interesting of all possible universes and that we exist to make it so. And maybe he's right.

But science has told us again and again - and this is a deeply humbling message - that the universe is not about us.

What's certain is that, in the foreseeable future, there's no plausible do-over in space. The Earth is not disposable. Here we make our stand.

That’s what we learned from going into space.