As sanctions bite in Cuba, the U.S. — once a driver of hope — is now a source of pain 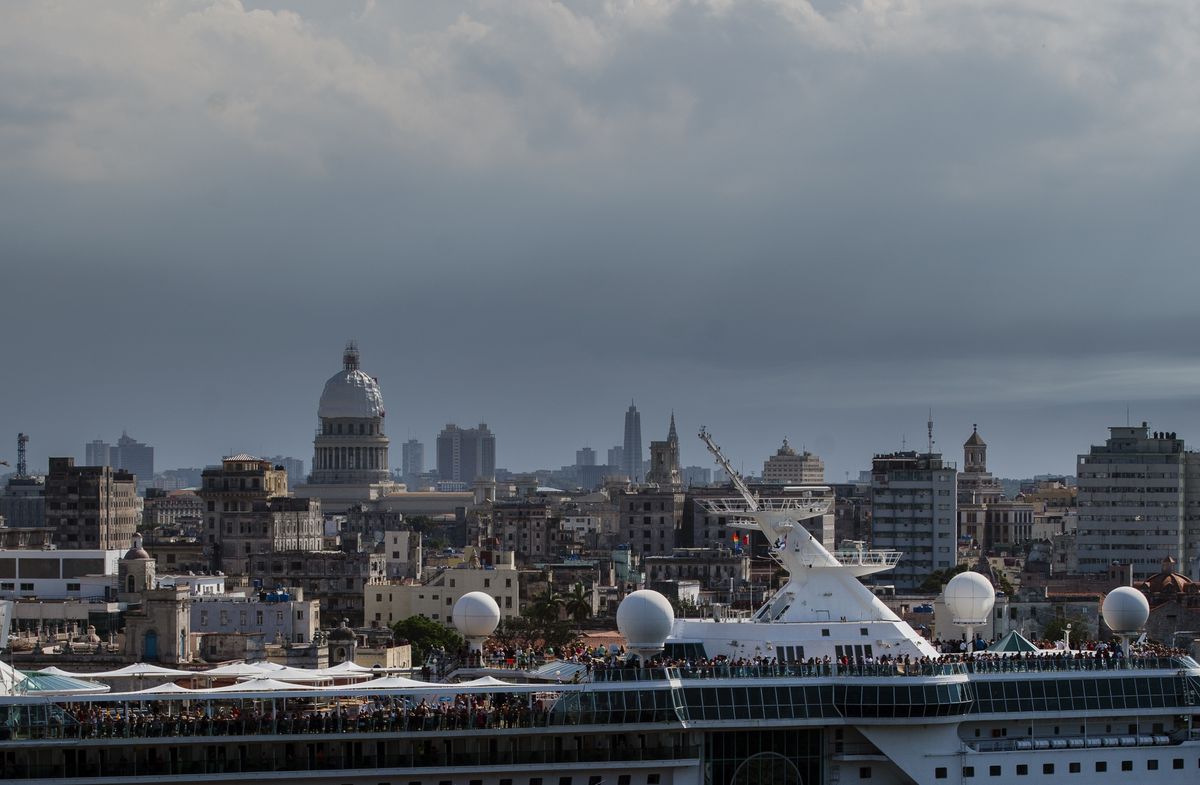 Passengers fill the top of The Empress of the Seas, a Royal Caribbean vessel, as it navigates out of the harbor in Havana, Cuba, Wednesday, June 5, 2019. Major cruise lines dropped stops in Cuba from their itineraries after the Trump administration's new restrictions on travel to Cuba. (AP Photo/Ramon Espinosa)

Passengers fill the top of The Empress of the Seas, a Royal Caribbean vessel, as it navigates out of the harbor in Havana, Cuba, Wednesday, June 5, 2019. Major cruise lines dropped stops in Cuba from their itineraries after the Trump administration's new restrictions on travel to Cuba. (AP Photo/Ramon Espinosa)

HAVANA - Just like that, the cruise ships are gone, along with thousands of cash-toting Americans who oohed and aahed - and shopped - amid the crumbling grandeur of Old Havana.

For Cubans, it's a bitter reversal of fortune. President Barack Obama's opening here, leading to his historic visit three years ago, inspired hopes of an economic boom, bringing American investment and visitors back to this communist island largely shut off from the United States for more than a half-century. A new crop of restaurateurs, IT entrepreneurs, artists and fashion designers, reveling in a fresh sense of optimism, began building businesses to tap into the seemingly lucrative detente.

But as a deepening frost settles in between the Trump administration and Havana, Cuba is instead confronting its worst economic setback in years.

Lines have snaked hourslong in front of markets selling rationed meat. The lawn of the Nicaraguan Embassy - a launch point for migrants seeking to enter the United States via Mexico - is overflowing with visa applicants.

The near-collapse of Cuba's most important patron, oil-rich Venezuela, and the Cuban government's own failure to enact reforms more rapidly, have damaged the fragile economy, analysts say. But especially in recent weeks, nothing has stung more than stiffening U.S. sanctions.

Measures taken by Washington aimed at punishing Cuba for supporting Venezuelan President Nicolas Maduro are deepening disruptions to foreign supply chains, scaring off some of the Canadian and other banks that have helped finance $2 billion in food imports annually, according to industry and Trump administration officials.

Facing a cash and credit crunch, the Cuban government last month reintroduced broad rationing, giving rise to several weeks of what many here describe as the longest food lines since Venezuelan oil and aid began flowing to the island during the early 2000s.

After new U.S. travel restrictions were announced this month, cruise ships - the biggest source of U.S. visitors to Cuba - have begun diverting around Cuban ports, offering passengers alternate routes or refunds. Trump administration officials calculate that their punitive steps will cut the number of Americans visiting Cuba by more than half. Nearly 600,000 visited last year.

Cuban officials counter that the American steps are coming down hardest not on the government, but average citizens.

Recent shortages of chicken, eggs, soap and other goods have reminded Cubans of the early 1990s 3 the crippling "special period" of hunger and hardship after the collapse of the Soviet Union, the government's previous major patron.

The government has diversified Cuba's economy since those years, with new pillars such as tourism in place to protect against such a precipitous fall now. But authorities are already warning the people to prepare for leaner times.

The Cuban government describes the food shortages as a temporary disruption they are laboring to fix. Lines in the capital have eased markedly in recent days. But eyewitnesses say they remain longer than usual in other cities, including Santiago de Cuba and Camaguey. With access to future supplies still unpredictable, some expect further disruptions in the weeks and months ahead.

Others fret over the next round of U.S. sanctions, expected in days or weeks, with new limits on the remittances from family in the United States and elsewhere that allow many Cubans to make ends meet.

On a sweltering recent morning, Antonio Muniz, an 83-year-old former factory worker, waited in line to buy meat in Old Havana. Cubans had flooded the market after it received an overnight shipment. Muniz, a diabetic, had been at it for an hour; he had another to go before he'd reach the door.

"This is different" from the special period, he said. "But we're heading toward the same end. Difficulty in being able to live."

Tempers have flared as frustrated Cubans jostle for position on food lines. A social media campaign - #LaColaChallenge - has Cubans flooding Twitter with photos of massive lines, including selfies of themselves tragicomically waiting in them.

Outside a Havana supermarket one morning, some anxious customers in a line for chicken blamed the government.

"This will never be fixed," said a 47-year-old man who would not give his name. "The problem is political. Leaders who only think they know what they are doing."

Yet many more lashed out at the Trump administration and insisted Cubans would stoically tighten their belts in the face of "American aggression."

"This situation we are living can only be attributed to one single problem, the U.S. blockade from this disgraceful Trump," vented Rudilay Rodriguez, a 75-year-old retiree. "The man is crazy, a paranoid. . . The situation has become worse for us since he's been there."

The tourism sanctions, Cuban authorities and business owners say, have caused particular harm to the island's burgeoning private sector. That includes civilian owners of restaurants, Airbnb rental apartments and cultural tours that since 2016 have geared their businesses toward American travelers, bringing a dose of the free market to one of its last frontiers.

"The U.S. wants to attack the Cuban government, and destroy the revolution and make socialism fall," said Deborah Rivas Saavedra, director of foreign investments at Cuba's Foreign Trade Ministry. "But the ones being affected are these businesspeople that (the United States) supposedly wants to see benefit. The ones who don't support socialism."

The U.S. measures are being widely denounced here by private business owners. Many blame their own government for moving too slowly to open the economy. But after Obama's opening - his administration normalized diplomatic relations between the countries, and loosened restrictions on travel, banking and remittances - they also feel betrayed by the United States.

Marvin Segundo, 35, still recalls the "excitement" of Obama's trip in March 2016, when the president touched down in Havana.

"We really thought something was happening under Obama, and that the culture here would change," Segundo said. "I mean, for a while, it did."

Segundo launched a tour business after Obama's trip, offering visitors the chance to play basketball with himself and other Cuban players for $55 a game.

"Ninety-eight percent of my customers were Americans," he said.

But after the Trump administration began to issue travel warnings and retool travel policy for Americans in late 2017, Segundo began to see a subtle decline. By this month, business had fallen by 60% from last year - a drop likely to worsen after sharp new curbs on travel announced by Washington last week.

"I'm going to move to Chile, and will try to make it there," he said. "All we have here now are food lines and rationing.

"I feel sad. I feel as if something great was about to happen. I don't understand why the U.S. is doing this."

As shipments of oil from teetering Venezuela become less reliable, the state-controlled media have begun to call on Cubans to conserve vital energy - warnings that have some fearing a return to the kind of rolling blackouts witnessed in the 1990s.

"Today the reality is different in terms of the diversification of our economy, but we have to be prepared for the worst," former President Raul Castro, the brother of the late revolutionary Fidel Castro, warned in a speech last month.

The Trump administration is tightening sanctions only a year after Raul Castro stepped down, leaving someone outside the family dynasty in charge of the island for the first time in nearly 60 years.

Administration officials believe President Miguel Diaz-Canel is navigating a still delicate transition, and mounting pressure has led him to dial back support for Venezuela's Maduro in his standoff with the U.S.-backed opposition leader Juan Guaido.

Analysts and some Cuban insiders say the brain trust in Havana has done itself a disservice by seeking to portray Diaz-Canel as a caretaker of continuity rather than a figure for change. Though Cuba has taken important steps toward modernization under Diaz-Canel - improving access to the internet via smartphones and allowing private Wi-Fi more broadly - it has moved far more slowly on the economic front and remains years behind the free-market reforms made by communist governments in China and Vietnam, for example.

"This government has a problem," he said. "And the first problem is the way they have framed themselves, by continually calling themselves 'continuity' - which might be pleasing ideologically for some, but gives the bureaucracy the perfect excuse to change nothing."

Asked whether that might mean accepting the U.S. insistence that Maduro leaves power, he said that depended on the Venezuelan leader.

“To start with, you have to ask if Maduro is willing to abandon power, because Maduro has significant support from the population,” he said. “No one knows exactly how much support, but it’s significant. It’s probably higher than some presidents of many Latin American countries have at this moment. It’s probably bigger than the support President Trump has.”