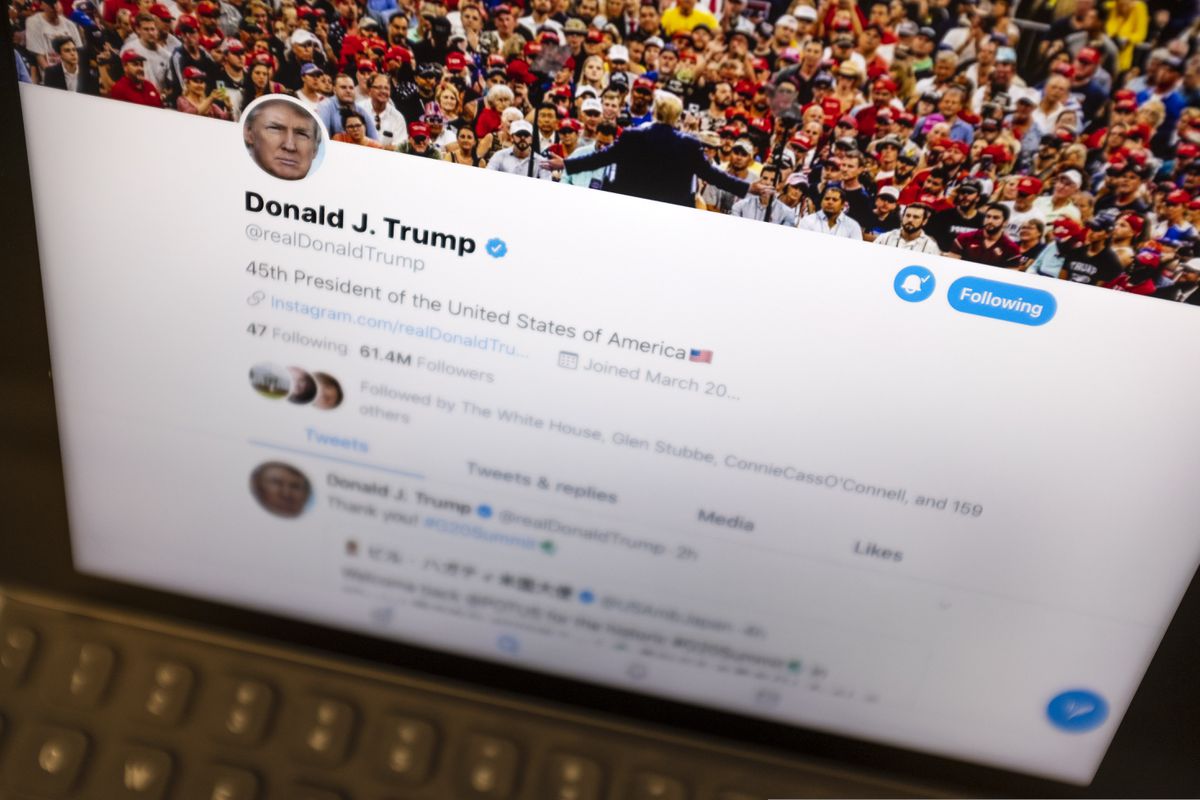 President Donald Trump's Twitter feed is photographed on an Apple iPad in New York, Thursday, June 27, 2019. Trump’s next tweet might come with a warning label. Starting Thursday tweets that Twitter deems in the public interest, but which violate the service’s rules, will be obscured by a warning explaining the violation. Users will have to tap through the warning to see the underlying message. (AP Photo/J. David Ake)

President Donald Trump's Twitter feed is photographed on an Apple iPad in New York, Thursday, June 27, 2019. Trump’s next tweet might come with a warning label. Starting Thursday tweets that Twitter deems in the public interest, but which violate the service’s rules, will be obscured by a warning explaining the violation. Users will have to tap through the warning to see the underlying message. (AP Photo/J. David Ake)

SAN FRANCISCO - Twitter on Thursday said it would begin labeling tweets from national political figures, including President Donald Trump, that the company would have taken down under other circumstances for violating its rules, a move that could appease some longtime critics at the cost of opening a new political rift with the White House.

The new policy applies to political candidates and government officials who have more than 100,000 followers, Twitter said. Before users can view tweets that the company has flagged as a violation of its policy, they will need to click on a screen that says, "The Twitter Rules about abusive behavior apply to this Tweet. However, Twitter has determined that it may be in the public's interest for the Tweet to remain available."

Twitter said it would also deprioritize the labeled tweets in the company's algorithms and search bar so that they would circulate to fewer people. The company has set up a special team tasked with enforcing the new policy, and the notification label will appear only on rare occasions.

Twitter's new decision to label tweets comes at a moment when technology companies are under immense pressure to better monitor and police their platforms for extremism, hate speech, violence and abuse. In response, some social-media companies are embracing ideas they've long resisted.

Reddit, for example, opted on Wednesday to "quarantine" the biggest forum for supporters of President Trump following years of complaints that it had become a hub for conspiracy theories and violent threats. At Facebook, meanwhile, company officials on Thursday revealed more details about its nascent plan to create an oversight board of outside experts that can help make decisions about how the company polices content. Before this week, Twitter had maintained that even vitriolic tweets from national leaders such as Trump should remain in full public view, arguing that it's in voters' interests to see the president's views unfettered.

But Silicon Valley's latest efforts could touch off another sort of controversy: continued attacks from Trump and other Republicans who contend they're biased against conservatives. This week, Trump again accused Twitter and its peers of limiting the reach of his tweets and wrongly stifling his users, though he again did not present evidence for such claims.

The White House did not immediately respond to requests for comment.

The changes, which The Washington Post previously reported the company was considering, are the social media giant's latest and boldest attempt to balance its desire to keep up material that is newsworthy against long-standing complaints that powerful people can get away with saying things that would get everyday users punished.

"In the past, we've allowed certain Tweets that violated our rules to remain on Twitter because they were in the public's interest, but it wasn't clear when and how we made those determinations," Twitter said in a blog post. "To fix that, we're introducing a new notice that will provide additional clarity in these situations, and sharing more on when and why we'll use it."

Twitter has a number of rules about what users are allowed to tweet. It bans threats or glorification of violence, as well as promotion of terrorism or violent extremism. It disallows targeted harassment or inciting others to do so, as well as bullying. It also can remove what it dubs "hateful conduct," which can involve threatening or harassing people on the basis of their race, ethnicity, national origin, sexual orientation, gender, religion, age or disabilities. More recently, the company has banned tweets that are not direct incitements to violence but that may lead to real-world harm.

Because the guidelines are broad, there may also be room for interpretation. For years, Twitter users have complained that the company does not enforce its own policies and that bullying and harassing tweets can stay up despite their protests. The company has increased the number of content moderators in response.

The new policy will go into effect immediately and will not apply to other influencers and leaders. It's not retroactive.

But it also comes amid persistent allegations from Republicans that leading technology platforms, most headquartered in liberal Silicon Valley, are unfairly silencing conservative voices online. The partisan battle is also playing out as a broader debate about how and when tech giants should be mediating free speech and whether their standards - such as prohibiting incitements to violence - are being consistently and transparently applied.

GOP leaders continue to accuse Twitter and its tech peers of censoring conservative users or limiting their reach, often citing disputed evidence to make the claim that the industry is biased.

The president has raised such concerns both this week and in the past, including in a private meeting with Twitter CEO Jack Dorsey at the White House in May during which Trump complained about his ever-changing follower count. Twitter, for its part, has stressed its political neutrality.

Because of its role in distributing news in real time, Twitter has been a staunch defender of the free speech rights of public officials. But during the past year, Dorsey has talked extensively about rethinking the company's values with a different approach to the harm caused by certain tweets. In March, a Twitter executive told The Post that the company was exploring how it can annotate offensive tweets that break its rules but remain in the public interest.

In its post Thursday, Twitter said its highest priority was to "protect the health of the public conversation," which includes allowing people to converse directly with leaders and public officials, and to provide a record of what these leaders say to hold them accountable. But in the "rare" cases in which those tweets go against Twitters policies on hate speech, bullying or harassment, the company said it would take stronger steps to "manage the harm that the tweets can cause."

Reddit's quarantine of its Trump supporter forum, called "r/The_Donald," has long served as a highly trafficked and controversial gathering place for supporters of Trump and Republicans on Reddit, the United States' fifth-most-popular website. The move will conceal the forum behind a warning and require viewers to verify they are sure they want to see the contents.

The forum's moderators moved to Twitter on Wednesday to express their outrage about Reddit's decision.

Facebook has also weighed its own newsworthiness exception and, during the 2016 election, considered banning President Trump for his statements about Muslims. The company ultimately decided to keep up the posts.

Trump, who broadcasts his political positions and attacks to more than 61 million followers daily, has repeatedly tested its standards. Last year, he used the service to call a former aide who is African American a "dog." He tweeted a video of him shoving a person to the ground with a CNN logo superimposed over the face. He has tweeted about people's physical appearance and called them dumb.

But the issues facing Twitter - which has more than 300 million users globally - go well beyond concerns about Trump and other candidates in the coming U.S. election. Leaders in politically unstable countries have used the service to make incendiary comments that critics said have helped to legitimize violent acts among followers.

The new labeling policy is likely to generate a flood of complaints, as users barrage the service with examples of tweets they hope will be reviewed.