The ‘narluga’ is a strange hybrid. But it’s far from alone. 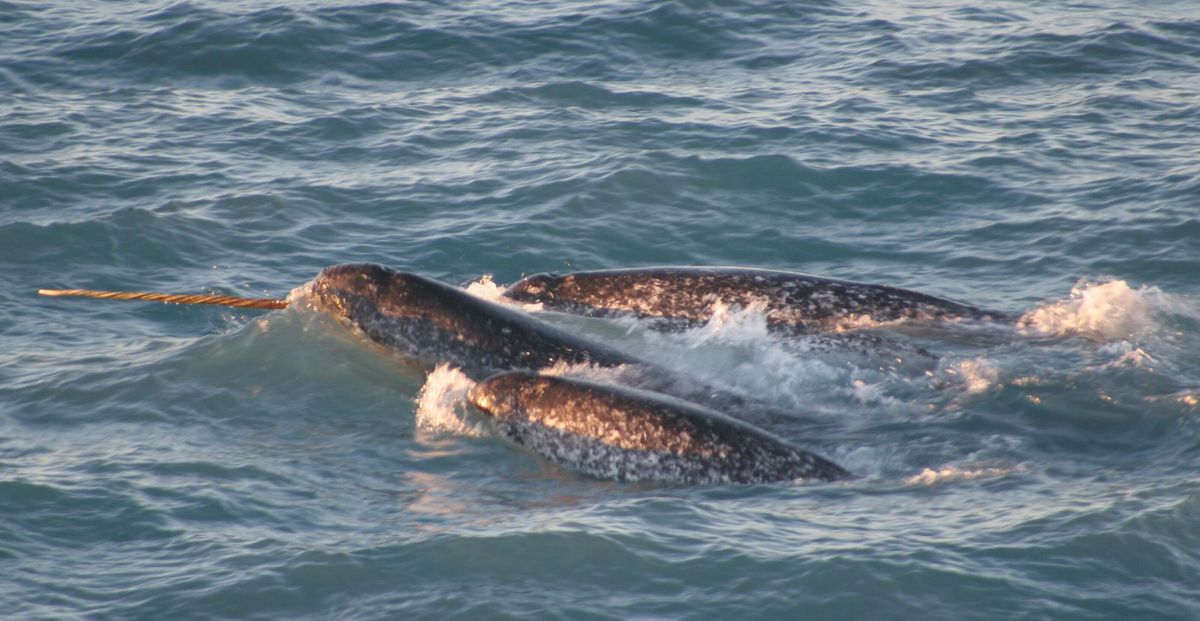 A pod of narwhals (Monodon monoceros) in central Baffin Bay. Narwhals are the most vulnerable animals to increased ship traffic in the Arctic during September. (NOAA/OAR/OER/Kristin Laidre)

A pod of narwhals (Monodon monoceros) in central Baffin Bay. Narwhals are the most vulnerable animals to increased ship traffic in the Arctic during September. (NOAA/OAR/OER/Kristin Laidre)

If you cross a horse with a zebra, you get a zorse. Lions and tigers make ligers. Polar bears and grizzlies produce pizzlies.

And recently, scientists analyzed DNA to prove the existence of what might be the most fantastic hybrid of them all. They call it a narluga - the mash-up offspring of a beluga whale and a narwhal, the "unicorn of the sea."

Scientists had suspected the narluga's existence for decades. In 1990, a scientist named Mads Peter Heide-Jorgensen happened across a weird-looking whale skull hanging on an Inuit hunter's toolshed in Greenland. The hunter said he'd killed the animal for food a few years before, along with two other similar-looking creatures. They fit the description of neither narwhal nor beluga: They had gray skin, beluga-like flippers and narwhal-like tails.

But the weirdest detail of all were the mystery creature’s chompers. While belugas have 40 teeth that they use to snag fish, narwhals are nearly toothless and instead feed by suction. (Technically, that tusk that protrudes from their heads is a tooth, and there’s a small set of vestigial teeth behind that, but none resemble what we think of as normal dentition.)

The mystery skull? It had 18 teeth, all at the front of the mouth, and many of them bearing strange spirals not unlike a narwhal's tusk.

Nearly 30 years later, Heide-Jorgensen teamed up with Eline Lorenzen, an evolutionary biologist at the Natural History Museum of Denmark, to analyze the DNA in those teeth. The results made clear what Heide-Jorgensen figured long ago - the skull belonged to a narwhal-beluga hybrid, the first ever confirmed. The team published their findings in the journal Scientific Reports.

Even more surprising was that the animal's mother had been a narwhal and the father a beluga.

The narwhal's tusk, which is usually only found in males, is thought to be a secondary sexual characteristic that's "used for courtship and displays," Lorenzen said. The male beluga wouldn't have had a tusk with which to woo the narwhal female, but clearly he got the job done anyway.

Even under normal circumstances, scientists know very little about the sex lives of belugas and narwhals. Both creatures spend a good portion of their year hidden in densely packed sea ice, which makes it tough for people to observe the animals and learn their secrets.

"But from a purely morphological point of view," Lorenzen said, both species "have sort of the same size testes, and they have the same size penis, so it could work."

Strange as the narluga may seem, it is only the most recent in a long line of known couplings between different species of whales and dolphins. A 2016 study found reports of nearly 20 such hybrids, only seven of which occurred in captivity.

Spinner dolphins and pan-tropical spotted dolphins; dusky dolphins and southern right whale dolphins, and even blue whales and fin whales have hooked up to produce offspring. And these are just the hybrids we know of. "In general, it is likely that many living hybrids seen in the wild are not recognized as such," the 2016 study's authors wrote.

The study found that most examples of cetacean hybridization were not between closely related species. Only four out of 18 hybrids belonged to so-called sister species, or those that have most recently split off from each other, of which the narwhal and beluga are one example. Just two belonged to the same genus. Overall, the ability of cetaceans to interbreed appears to be "extremely high" when compared to land mammals, that study said.

While scientists can't yet explain why whales and dolphins are so flexible when it comes to mating, one theory is that it is a side effect of "social play." This is when young animals try out behaviors they'll use later on, but in a lower-stakes version, like a kitten playing with a dead mouse. It sometimes involves making sexual advances on inanimate objects, members of the same sex or even a different species.

Males that engage in such trial runs may gain experience that helps them successfully breed with their own kind later on. In other words, if nothing bad happens (such as injury or death), and there's a potential for reward, then evolution may actually encourage such dabbling.

So does this mean the recently discovered narluga was the vanguard of a new species? The short answer is no, Lorenzen said. For the narluga to become a species, these merging events would have to keep happening, again and again, for a long time.

The offspring themselves would also have to be fertile - something that isn't always the case with hybrids. (Lorenzen could not determine this narluga's fertility from its teeth and bone DNA.) But it's not impossible. Narwhals and belugas have the same number of chromosomes, which isn't a surefire indicator of fertility, but is at least a step in the right direction. At least two of the hybrids in the 2016 paper were found to be fertile.

In any case, hybridization can be important for a species' evolution, even if the offspring isn't as visually striking as the narluga.

"We're the result of hybridization," Lorenzen said. "For those whose ethnicity is not African, we all have a couple of percent of Neanderthal DNA in us. It might not have turned us into a new species, but it certainly gave us some capacity to survive some situations that we wouldn't be able to survive very well in otherwise."

This brings us back to another interesting tidbit from the narluga skull. When Lorenzen's team analyzed its teeth, they found carbon signatures much more like that of a walrus than either a narwhal or beluga. This means that the narluga got most of its food from the sea floor - probably clams and other invertebrates - whereas its parent species make a living on fish found in the waters above.

"It might have been forced to have that foraging strategy because it had a really weird tooth set," Lorenzen said. "It's incredible that it survived to adulthood."

While no one is suggesting that narlugas will soon take over the world’s oceans, it’s possible such an adaptation might someday be an advantage - especially if declining fish stock and shrinking sea ice force both narwhals and belugas to adapt to new habitats.