No deaths reported in the 7.1 magnitude earthquake that struck Southern California 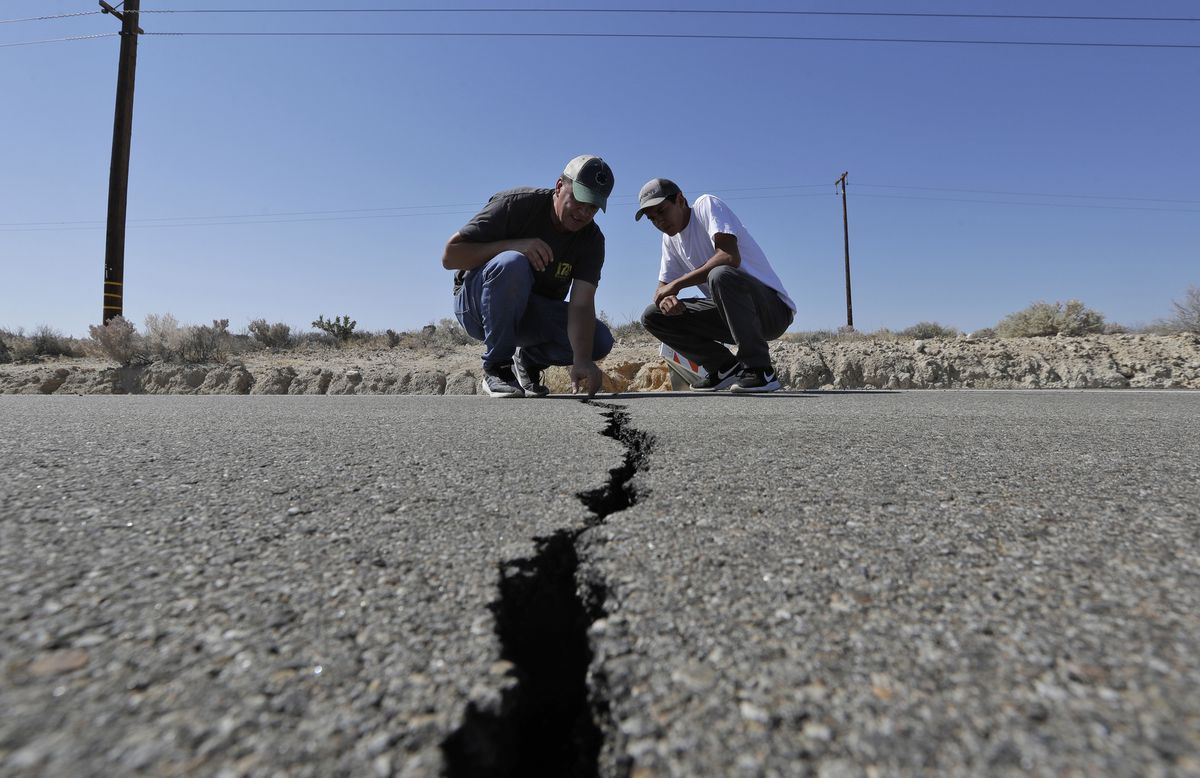 Ron Mikulaco, left, and his nephew, Brad Fernandez, examine a crack caused by an earthquake on highway 178 Saturday, July 6, 2019, outside of Ridgecrest, Calif. Crews in Southern California assessed damage to cracked and burned buildings, broken roads, leaking water and gas lines and other infrastructure Saturday after the largest earthquake the region has seen in nearly 20 years jolted an area from Sacramento to Las Vegas to Mexico. (AP Photo/Marcio Jose Sanchez)

Ron Mikulaco, left, and his nephew, Brad Fernandez, examine a crack caused by an earthquake on highway 178 Saturday, July 6, 2019, outside of Ridgecrest, Calif. Crews in Southern California assessed damage to cracked and burned buildings, broken roads, leaking water and gas lines and other infrastructure Saturday after the largest earthquake the region has seen in nearly 20 years jolted an area from Sacramento to Las Vegas to Mexico. (AP Photo/Marcio Jose Sanchez)

The 7.1 magnitude earthquake that rocked Southern California on Friday night rattled buildings, fractured roadways and left residents on edge, but did not cause any fatalities or major injuries, officials said.

California's second major earthquake in less than two days struck near Ridgecrest, a Mojave Desert town about 125 miles northeast of Los Angeles. The same area was rattled by a magnitude 6.4 earthquake, the largest in nearly two decades, on the morning of July Fourth.

The Friday night earthquake was about 10 times larger, seismologists said. Shaking was felt as far away as Phoenix, Las Vegas, Baja California and Reno, according to crowdsourced data on the U.S. Geological Survey.

As the sun rose Saturday, officials fanned out across the remote, high desert towns of Ridgecrest and Trona to determine the extent of the damage.

Getting details overnight was a challenge, officials said, particularly because power had been temporarily knocked out to much of the sparsely populated area.

The earthquake sparked some fires, gas leaks and damaged walls, but there were no initial reports of any deaths or serious injuries, officials said.

"We do feel like there's damage," said Kern County Fire Chief David Witt at a Saturday morning news conference, "but we don't know the extent of it yet."

Los Angeles, more than 100 miles south of the epicenter, did not have any initial reports of major damage to buildings or other infrastructure.

The violent shaking sent residents in Trona and Ridgecrest running outside as light fixtures swayed and books, bottles and pans crashed to the floor. Some spent the night sleeping in their cars or in camper vans. Others fled.

"My kids keep asking me what am I gonna do," said Ronnie Tolbert, 60, who used a flashlight before sunrise Saturday to find her way through her home. "I said, I don't know."

Tolbert said she raised 11 children in her home of 32 years in Trona. During the shaking, the fireplace collapsed, leaving bricks scattered across her living room floor. The ceiling tiles in one room had all fallen, and the windows had shattered. The floors were filled with magazines and books, bottles and food.

After the earthquake, which struck at about 8:20 p.m., Tolbert and her husband pulled their mattresses onto the front yard to try to sleep. Her daughter rested in a truck parked on the street. Her grandson and his friends sprawled on mattresses across the road.

The frequent aftershocks and the persistent anxiety that another big quake would soon hit made it impossible to get any rest. Many residents of Trona, home to about 1,900 people, slept in their driveways or on the street in camper vans or on mattresses.

It has been two decades since residents of the area felt such a major earthquake. A 5.8 magnitude quake rocked Ridgecrest, home to about 30,000 people, in 1995. A 7.1 quake struck the Hector Mine area of the Mojave Desert about 100 miles to the southeast in 1999.

Two earthquakes this week in rapid succession could make homes more prone to collapse in aftershocks, officials said Saturday. There have been more than 1,400 aftershocks in the region, seismologists said, with the first, on Friday night, registering a 5.5 magnitude.

"Maybe it's not a 7.1 next time, maybe it's lower _ and with that, there could be more damage because structures are weakened," Witt said. "We need to be vigilant."

After more than 30 seconds of violent shaking Friday night, drivers raced to get out of Ridgecrest, not stopping at stop signs, said Matt Warren, a mine superintendent who lives on West Dolphin Avenue with his wife and his Labrador retriever, Hallie.

The couple has lived in Ridgecrest for 20 years, but said it's time to move out of the small town, where many residents work in mining or for the military. Ford and Chevy trucks, along with recreational vehicles, are parked on streets dotted with single-family homes.

"We've been wanting to get out of here anyhow," he asked. "The time is right."

Residents who endured more than 30 seconds of violent shaking answered their phones frantically, reassuring loved ones that they had survived. As she drove home from Bakersfield, Trona resident Winter Wilson said in a shaking voice: "They're saying the ground split. They made me promise not to come."

The number of people without power in Ridgecrest dropped from about 3,000 on Friday night to 55 on Saturday morning, fire officials said. State officials will prioritize medical and firefighting needs, as well as restoring power to the rest of the area, said Mark Ghilarducci, director of the California Governor’s Office of Emergency Service.

A joint task force that will include 200 security forces and military aircraft will be sent to assist, said Maj. Gen. David Baldwin, adjutant general of the California National Guard.

The quake caused further damage to a U.S. weapons testing facility outside Ridgecrest, the Naval Air Weapons Station China Lake, although details were sparse early Saturday. The 1.1-million-acre facility is the Navy's largest, covering an area larger than Rhode Island.

The facility is "not mission capable until further notice," the naval base said on its Facebook page. However, officials said, security protocols "remain in effect."

The Friday quake occurred on the same fault system as Thursday's 6.4 temblor, further away from Los Angeles, though still in the Owens Valley.

Well-known Caltech seismologist Lucy Jones said the fault is now likely to be 25 to 30 miles long, and growing. Given its size, it's likely to be followed by more shaking that will be felt in Los Angeles, she said.

"The largest aftershock, on average, to a 7.1 would be a magnitude 6," Jones said. That means that another quake on the order of Thursday's 6.4 temblor "would not be surprising to anybody."

Or it could be even bigger.

Jones said she could not recall a pattern of earthquakes in California where a 6.4 foreshock was followed by a 7.1 event, only to be followed by an even bigger quake. But that doesn't mean it can't happen, she cautioned.

"It is clearly a very energetic sequence, so there's no reason to think we can't have more large earthquakes," she said.

Witt said inspectors were checking the condition of Isabella Lake Dam above Bakersfield. An initial inspection suggests the dam is safe, he said, but the U.S. Army Corps of Engineers will conduct a more detailed investigation.

When the earlier temblor hit Thursday, scientists had warned that it could lead to an even larger quake. Ridgecrest has been rattled by more than 17 magnitude 4 quakes and at least 1,200 aftershocks since Thursday. A magnitude 5.4 aftershock occurred earlier Friday morning _ strong enough to awaken Los Angeles residents about 125 miles away.

"This is an earthquake sequence," Jones said. "It will be ongoing."

The Friday night quake was larger in magnitude than the destructive 1994 Northridge quake, which measured 6.7 magnitude. But that temblor occurred in an urban area, while this week's huge quakes occurred more than 100 miles from L.A.

The aftershocks from Friday's earthquake will probably "go on for months, if not years," Caltech seismologist Egill Hauksson said. The odds, he said, were decent that there could be another aftershock of magnitude 5 or greater at some point.