British ambassador to US resigns after leak of diplomatic cables 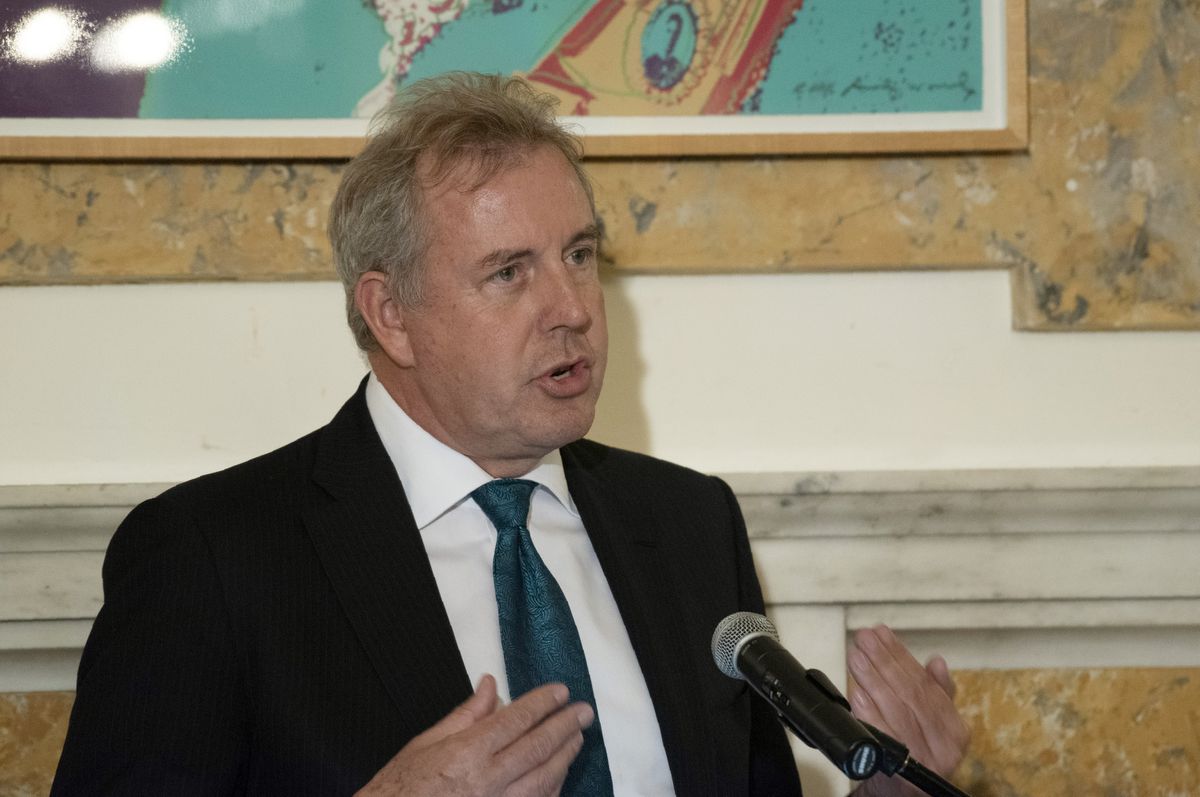 LONDON - After several days of intense criticism by President Donald Trump, who called the British ambassador to Washington a "pompous fool" and said his administration would no longer work with him, Kim Darroch on Wednesday resigned his post.

Darroch provoked the president's ire when a cache of secret diplomatic cables were leaked to a British tabloid over the weekend. The memos from Darroch described Trump as "insecure" and his administration as "inept" and "dysfunctional."

Prime Minister Theresa May stood by Darroch - and she told Parliament on Wednesday it was "matter of great regret that he has felt it necessary to leave his position."

"Sir Kim has given a lifetime of service to the United Kingdom and we owe him an enormous debt of gratitude," she said in Parliament.

"Good government depends on public servants being able to give full and frank advice," she said, adding, "I hope the House will reflect on the importance of defending our values and principles, particularly when they are under pressure."

In his resignation letter, Darroch wrote, "the current situation is making it impossible for me to carry out my role as I would like." He noted that his posting would have been up at the end of the year, but he had decided to depart now.

Darroch told staff on Tuesday he could not be an effective ambassador if the administration would not deal with him - and the episode did not seem to be passing.

The White House did not go as far as to direct the State Department to cut off contact with Darroch. But the ambassador was prominently disinvited from a White House dinner on Monday. And his aides feared Trump might try to formally remove him - taking the extraordinary step of declaring him "persona non grata," reserved for a foreign person whose entering or remaining in a country is prohibited.

Also key to Darroch's decision, a person familiar with his thinking said, was the clear lack of support from Boris Johnson, who is expected to succeed May as prime minister this month.

During a televised debate Tuesday evening, Johnson declined to criticize Trump for his tweets and would not promise to keep Darroch on the job - as May had done.

"I think the reality was that, in light of the last few days, his ability to be effective was probably limited," Vice President Mike Pence's chief of staff, Marc Short, told reporters in Washington on Wednesday. "So it was probably the right course."

Yet one British government official with knowledge of the affair, who requested anonymity because of the sensitivity of the matter, said it was ironic Darroch was pushed from his post over the leaked memos, as much of the critical material in the cables - about White House infighting and competencies - came from what Trump's own aides, advisors and friends told British embassy officials.

Simon McDonald, the head of British diplomatic service, was asked at a parliamentary hearing if he knew of any other examples where a "head of state of a friendly government has refused to cooperate with any of Her Majesty's envoys?"

Trump administration officials initially reacted well to the cables being leaked and seemed inclined to accept an apology, officials said. But Trump was annoyed as news of the leak took more oxygen - and the president has maintained a long-simmering dislike of May.

In Britain, much of the anger focused on Johnson, for giving the impression that he was more willing to appease the American president than stick up for a career civil servant.

"Boris Johnson isn't even PM yet and he is already responsible for a grievous blow to the UK's international reputation...," tweeted independent lawmaker Nick Boles. "The British people can now see that Boris Johnson will be Donald Trump's poodle, that his response to any command from the White House will be: 'How high, Mr President?' "

Alan Duncan, a Foreign Office minister, told the BBC that Johnson had "basically thrown our top diplomat under the bus, and there are a lot of people here in the Commons who are very, very angry."

Tom Tugendhat, chair of the foreign affairs committee, told Sky News: "If we allow ourselves to be bullied in who we chose to represent us, then frankly, what does sovereignty mean? If you can't even choose who represents you, then in what way are you in charge of anything?"

Sen. Lindsey Graham, R-S.C., a member of the Senate foreign relations committee, tweeted: "Kim Darroch did an outstanding job as Ambassador and sorry to see he has resigned his post. He got a raw deal from press."

Sen. Christopher Coons, D-Del., another member of the committee, told CNN, "the leak of this confidential cable has produced an unfortunate flap that has now led to the resignation of a very skilled career foreign servant. I will point out part of what drove this is President Trump taking to Twitter to insult the ambassador, to insult Theresa May, the outgoing prime minister of the United Kingdom."

Coons said that leak and tweets "further accelerated the distance between us."

The British foreign office announced earlier this week a probe to find the source of the leak, but have reported no progress. The cables - known as "diptels" - had limited circulation, but diplomats said they began circulating as far back as 2017 and finding the culprit may prove difficult.

Darroch is the second top British official to find himself in hot steam over leaked material. Two months ago, May sacked her defense secretary, Gavin Williamson, for allegedly playing a role in leaking details from a meeting about Britain's willingness to work with Chinese telecom giant Huawei.

Dawsey reported from Washington. The Washington Post’s Jennifer Hassan in London and John Wagner in Washington contributed to this report.