Some asylum seekers forced to wait in Mexico help each other 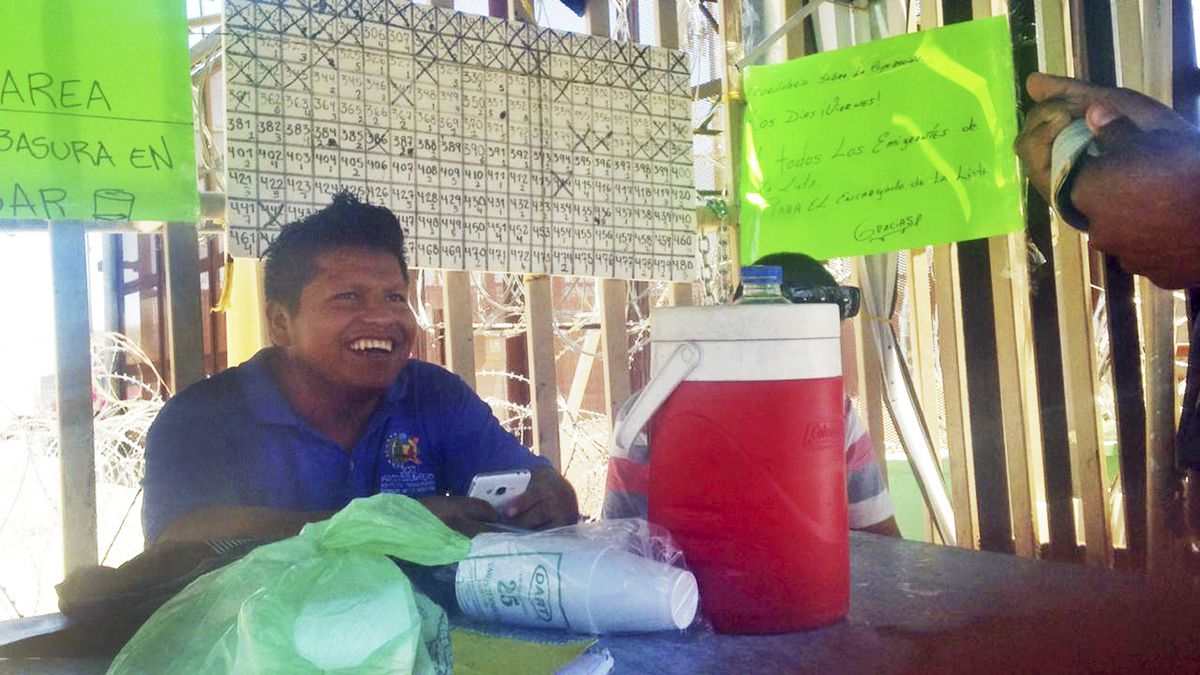 In this July 2, 2019 photo provided by Jesse Tellera, asylum seeker Claudio Aviles sits by a posted list of migrants who are in San Luis Río Colorado, Mexico, waiting to seek asylum in the United States. Aviles, of Guerrero, Mexico, has since made it to the U.S. with his wife and young children. Thousands of asylum seekers are waiting on the Mexican side of the border to ask for asylum in the U.S., which has severely restricted the number of people it allows in each day. (Jesse Tellera via AP)

In this July 2, 2019 photo provided by Jesse Tellera, asylum seeker Claudio Aviles sits by a posted list of migrants who are in San Luis Río Colorado, Mexico, waiting to seek asylum in the United States. Aviles, of Guerrero, Mexico, has since made it to the U.S. with his wife and young children. Thousands of asylum seekers are waiting on the Mexican side of the border to ask for asylum in the U.S., which has severely restricted the number of people it allows in each day. (Jesse Tellera via AP)

SAN LUIS RIO COLORADO, Mexico — A small group of asylum seekers sit under a canopy on the side of a road leading into the United States, chatting to pass the time as a blazing desert sun pushes the heat into triple digits and fumes roll in from dozens of cars lined up to cross the U.S.-Mexico border.

Coming from Guatemala, Nicaragua, Mexico, Cuba and many other countries, they're waiting in San Luis Río Colorado, Mexico, to seek asylum at the official border crossing just south of San Luis, Arizona.

Under the canopy, surrounded by little but fencing and some stores and restaurants, they look like old friends. They have banded together around their small fold-up table, where they spend hours waiting.

They assign people with children to early morning shifts when the heat isn't as bad. A daily "colecta" — a collection of cash — pays for water and snacks for those guarding the table.

"Here, you have nobody but each other," Julio Montenegro, a 33-year-old Guatemalan who has been waiting for several weeks, said on a hot afternoon in late June.

Despite their bond, this group has just met. They're among roughly 950 people on the waitlist in San Luis Río Colorado that's moving slowly — only a few people each day get called for the chance to start a new life, and there are days when none do.

President Donald Trump's administration forces asylum seekers to wait in Mexican cities before they can start the asylum process, a policy referred to as "metering."

As a result, thousands of people along the Mexican border don't get an interview with an asylum officer for months and face danger even after fleeing violence and poverty in their home countries.

For the few who get an interview, the U.S. government still forces many to wait in Mexico while their immigration cases wind through court, which can take years.

The fate of those seeking asylum at the southern border is uncertain after the Trump administration this week said it was banning migrants from seeking U.S. protections if they pass through another country first. The rules have been challenged in court.

Metering and other policies that make it hard to seek asylum have led some migrants to cross the border illegally out of desperation, including Óscar Alberto Martínez Ramírez and his young daughter, Valeria, who were seen in a widely shared photo last month after drowning in the Rio Grande.

On some parts of the border, asylum seekers camp out in tents for weeks. They did in San Luis Río Colorado until late spring, when temperatures became dangerously high.

Now, most stay in hotels or rent rooms in houses, paid for by relatives in the U.S. They rely on each other to ensure a constant presence at the border to know when U.S. officials call someone for an interview. Typically, a person has a brief period to show up or they can be skipped over on the list, which is ordered by when people arrived at the border.

Despite the heat, San Luis Río Colorado is relatively safe compared with other Mexican border cities, where kidnapping and murder are rampant. It's a small place that supplies many of the farmworkers who tend fields of lettuce and other leafy greens in Yuma, Arizona, about a 40-minute drive north.

Many migrants waiting to get to the U.S. can feel comfortable walking down the street here, said Martin Salgado, who runs a shelter in the city of less than 200,000 people. He also helps manage the wait list, getting word from the Mexican government when the U.S. approves a number of people for asylum interviews.

Migrants at the top of the list stay at his 30-person shelter less than a 10-minute drive from the border. His mother founded it decades ago to feed and house immigrants deported from the U.S. — usually adults — before they made their way home.

Casa del Migrante la Divina Providencia now is filled with the voices of young children at play. There are a few small rooms with bunk beds, one specifically for families with children and others for single adults.

Of the approximately 950 people on the waitlist here, 65% are Mexican, 20% are Cuban and the rest are from various countries, with people from African nations increasingly passing through the city, Salgado said. On average, the government calls about eight people a day, although some days, none are called, he said.

Montenegro, the Guatemalan, said he has been waiting for weeks to reunite with his daughters in California. The truck driver, who rents a room in a house near the border, said he left his home country because he feared for his life after threats from gangs trying to extort money.

"They knew my kids' schedules," he said. "We left with what we had on our backs."

Jesse Tellera, 32, said she fled Nicaragua because of deep political turmoil that has caused chaos and poverty. The hairstylist said she left her young son with her mom and hopes to work and send money home.

Tellera said she has been waiting to seek asylum for three months and expects to wait at least another month. Life in Nicaragua is "not calm, there's no opportunity," she said.

Claudio Aviles, 25, of Guerrero, Mexico, was in San Luis Río Colorado with his wife and two young children for over three months and helped Salgado, the shelter operator, coordinate the waitlist.

At the border, waitlists are managed by local shelters or asylum seekers themselves. There have been reports of bribery and cheating to move up the list, so Aviles was dedicated to making it fair. He's now in Alabama with relatives, who had sent money so his family could rent a house while they waited.

“There’s a lot of crime in Guerrero,” Aviles said. “We’re looking for a better life.”