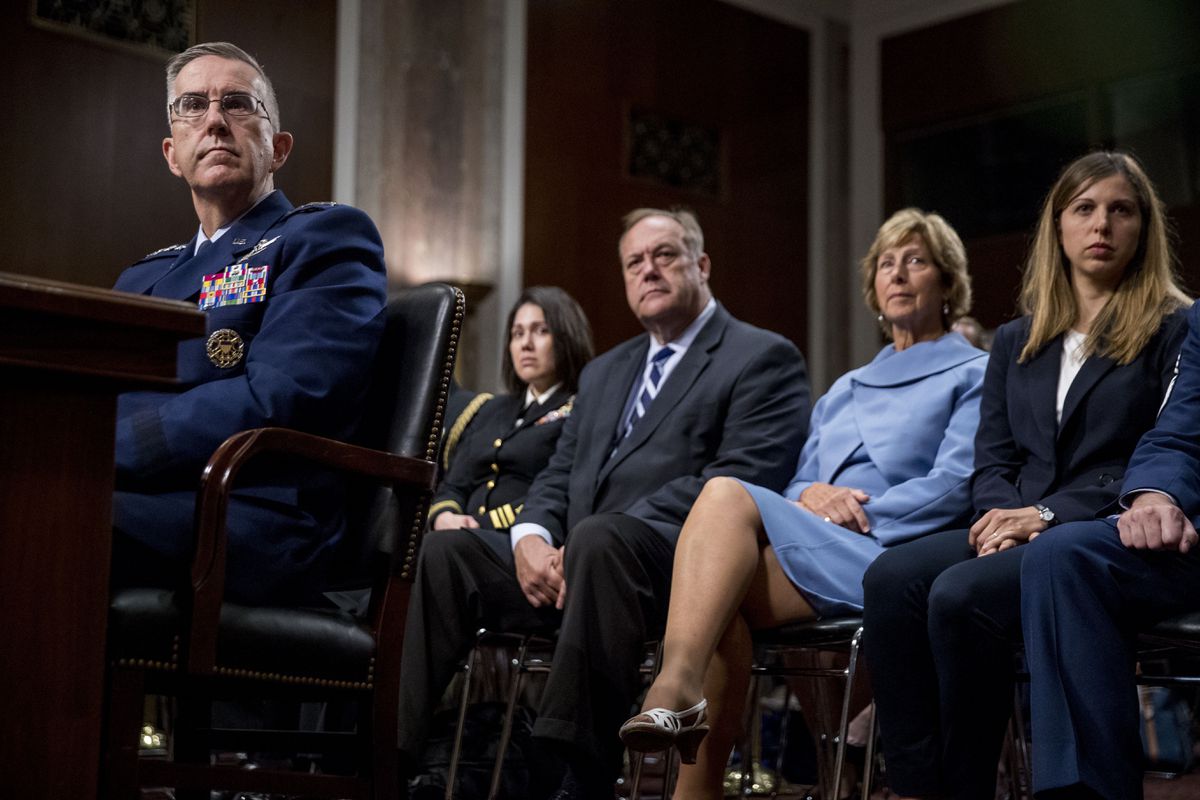 Gen. John Hyten, left, accompanied by members of his family including his wife Laura, second from right, and his daughter Katie, right, appears before the Senate Armed Services Committee on Capitol Hill in Washington, Tuesday, July 30, 2019, for his confirmation hearing to be Vice Chairman of the Joint Chiefs of Staff. (AP Photo/Andrew Harnik)

Gen. John Hyten, left, accompanied by members of his family including his wife Laura, second from right, and his daughter Katie, right, appears before the Senate Armed Services Committee on Capitol Hill in Washington, Tuesday, July 30, 2019, for his confirmation hearing to be Vice Chairman of the Joint Chiefs of Staff. (AP Photo/Andrew Harnik)

WASHINGTON - The two rape survivors who sit on the Senate Armed Services Committee split sharply Tuesday over President Donald Trump's pick to be the military's second-highest officer, amid accusations that he sexually assaulted an Army colonel when she was under his command.

"Sexual assault happens in the military. It just didn't happen in this case," Sen. Martha McSally, R-Ariz., said in defense of Gen. John Hyten at his confirmation hearing, arguing that the case "wasn't just a jump ball, not a he-said, she-said" but that "the full truth was revealed in this process."

"The truth is that General Hyten is innocent of these charges," she said.

But Sen. Joni Ernst, R-Iowa, said the facts of the investigation "left me with concerns regarding your judgment, leadership and fitness to serve as the next vice chairman of the Joint Chiefs of Staff."

Hyten, who is in charge of the nation's nuclear arsenal as the head of U.S. Strategic Command, was nominated to serve as vice chairman of the Joint Chiefs of Staff in April. That prompted Col. Kathryn Spletstoser to come forward with allegations that he repeatedly made unwanted sexual contact with her while traveling for work in 2017.

"These allegations are false," Hyten said Tuesday. "There was a very extensive, thorough investigation . . . that revealed the truth: Nothing happened, ever."

McSally and Ernst went public earlier this year with their personal stories of sexual assault: McSally was raped by a superior officer when she was in the Air Force, and Ernst, who is also a veteran, was raped in college.

Ernst did not defend Spletstoser's allegations but focused her concerns on Hyten's approach to the colonel, who was asked to leave his command after an internal investigation determined that she had created a "toxic work environment."

Hyten said Tuesday that the inquiry was prompted by complaints from "less than a half dozen" staff members, none of whom served on Spletstoser's team.

Ernst questioned why Hyten gave Spletstoser ringing endorsements even as complaints were coming in, and approved a formal reprimand only 90 days after a glowing November 2017 performance review, with no written warnings in between.

"You served in one of our most important positions within our United States military, overseeing our nuclear arsenal. However, you could not bring yourself to admit or recognize toxic leadership within your command," Ernst said. "You only did something about it when concerns were raised about your own leadership, and the investigation was not forwarded onto your higher echelon command, which I see as a clear conflict of interest."

Spletstoser has also questioned the timing of Hyten's actions, suggesting Tuesday that "he wanted to get rid of me pretty quickly" after a December 2017 incident at the Reagan National Defense Forum, where she said he entered her hotel room, pinned her against him and attempted to have sex with her.

Hyten denied the assertions, saying that Spletstoser made 34 additional, nonsexual accusations against him and his staff members after she was pushed out. Spletstoser told reporters: "I honestly don't know what he was referring to there."

The committee has investigated Spletstoser's charges for three weeks, holding five closed-door sessions to review the Air Force's inquiry and hear from Hyten and his accuser. According to congressional aides, Spletstoser's performance during her private testimony raised questions about her uncorroborated account. During Tuesday's public hearing, not a single senator defended her allegations.

Several Democrats on the panel attempted to avoid the subject of sexual assault altogether, and those who addressed it asked only what Hyten would do to improve the military's handling of accusations.

"It's just a horrible, horrible thing, but I really don't feel like I'm an expert in that area," Hyten said when Sen. Mazie Hirono, D-Hawaii, asked how he would approach the problem.

Two Democrats who had written to the Defense Department about Spletstoser's assertions, Sens. Elizabeth Warren of Massachusetts and Kirsten Gillibrand of New York, were not present for the hearing, as they are 2020 presidential candidates who will appear in primary debates in Detroit starting Tuesday night.

She also suggested that Spletstoser was "a wounded soldier who believes what she is saying is true, even if it is not."

Spletstoser watched from the front row of the audience, her request to speak during the proceedings having been denied. Afterward, she said Wilson's comments were "incredibly disrespectful and uninformed."

Hyten and Spletstoser said they would support releasing the 1,400-page investigation report. Spletstoser told reporters that it would reveal that at least one member of Hyten's detail "did have questions" about his boss's actions, and that Hyten took a private polygraph exam that came back inconclusive.

The committee has not said when it will vote on Hyten’s nomination. The Senate is not expected to vote on confirmation until after the August recess.