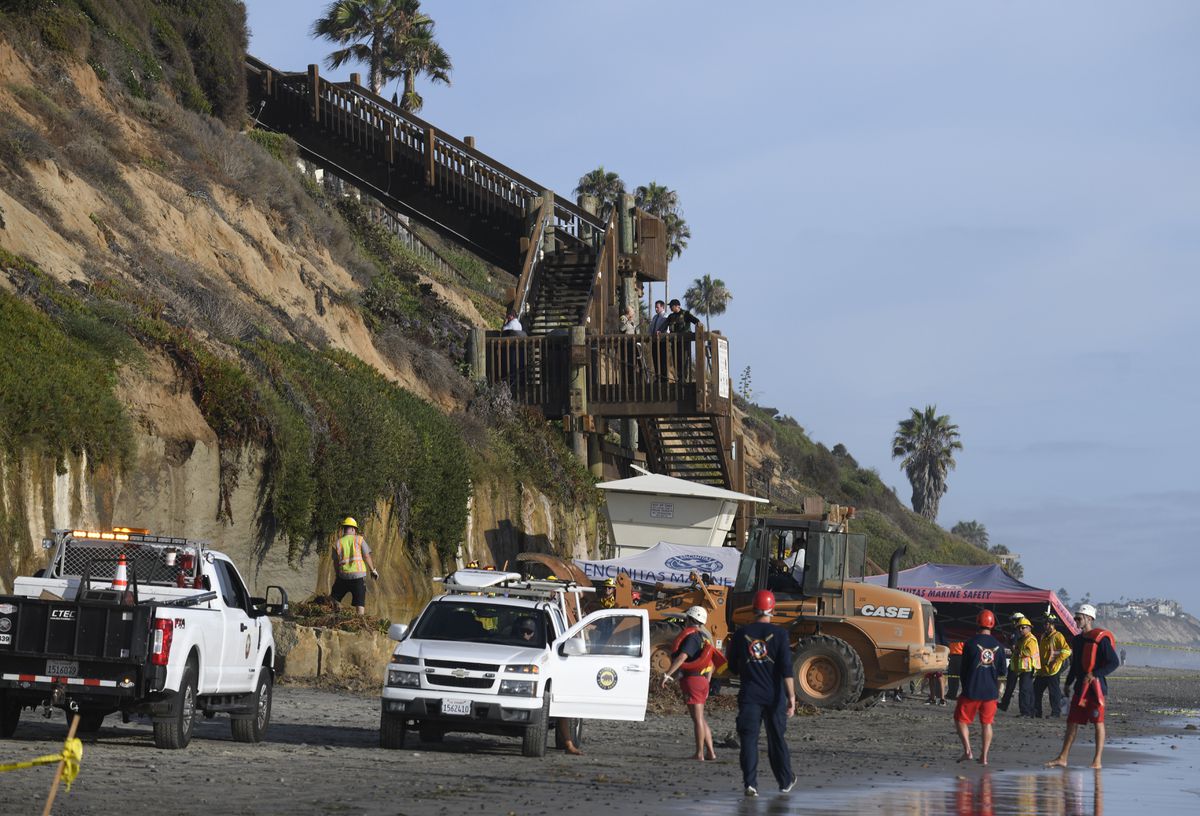 Lifeguards and search and rescue personnel work at the site of a cliff collapse at a popular beach Friday, Aug. 2, 2019, in Encinitas, Calif. At least one person was reportedly killed, and multiple people were injured, when an oceanfront bluff collapsed Friday at Grandview Beach in the Leucadia area of Encinitas, authorities said. (AP Photo/Denis Poroy)

Lifeguards and search and rescue personnel work at the site of a cliff collapse at a popular beach Friday, Aug. 2, 2019, in Encinitas, Calif. At least one person was reportedly killed, and multiple people were injured, when an oceanfront bluff collapsed Friday at Grandview Beach in the Leucadia area of Encinitas, authorities said. (AP Photo/Denis Poroy)

ENCINITAS, Calif. — Three women killed when a Southern California sea cliff collapsed were members of a family gathered for a celebration on the beach, authorities and relatives said Saturday.

The victims were part of a family gathering celebrating Cox's surviving breast cancer, the email said.

Cox died instantly at the scene, the email said. Her age wasn't given.

Clave "enriched the lives of all those around her with the joy and fun she brought to all," the email said, and Davis was an "incredible grandmother."

The three women leave behind spouses, children, and many members of their extended families, the news station reported.

"The nature of the accident and the loss is incomprehensible to all of us, our children and those around us," the email said.

Officials on Saturday reopened much of the popular surf beach that was closed following the tragedy.

Encinitas Lifeguard Capt. Larry Giles said a lifeguard was posted near the collapse zone, which is still marked by yellow caution tape. Someone left a bouquet of flowers on a nearby rock.

A 30-foot-long slab of the cliff plunged onto the sand Friday afternoon north of downtown San Diego.

Geologists were on scene Saturday assessing the area around the collapse zone. Homes on top of the cliff were in no immediate danger, Giles said.

A lifeguard reported feeling and hearing the thud as the dense dirt landed on the beach.

"It just happened to take place outside his peripheral (vision)," Giles said, noting that the lifeguard had his eyes trained on the water.

Lifeguards and beachgoers scrambled to the towering pile of debris — estimated to weigh tens of thousands of pounds — to help search for victims.

"I saw first responders, and I saw lifeguards frantically digging people out of the debris," Jim Pepperdine, who lives nearby, told the San Diego Union-Tribune.

Pepperdine said he saw people trying to resuscitate a woman before her body was covered.

The woman died at the scene, and two more people later died at hospitals. Another person was taken to a hospital, and a person who had minor injuries was treated at the scene, officials said.

Authorities said they were all adults.

Search dogs were brought in to hunt for other possible victims, and a skip loader was used to move the dense, heavy debris. No other victims were found.

Suburbs north of San Diego have long contended with rising water levels in the Pacific Ocean that pressure bluffs along the coast. Some are fortified with concrete walls to prevent multimillion-dollar homes from falling into the sea.

Long stretches of beach in Encinitas are narrow strips of sand between stiff waves and towering rock walls. People lounging on beach chairs or blankets are sometimes surprised as waves roll past them and within a few feet of the walls.

Grandview Beach can be reached by wooden stairs from a parking lot above. It is fairly narrow, with tides high this week. Surfers often lay their boards upright against the bluff.

Cliffside collapses are not unusual as the ocean chews away at the base of the sandstone, authorities said. Some beach areas have been marked with signs warning of slide dangers.

Several people have died or been injured over the years in bluff collapses.

Bluffs give way four to eight times a year in Southern California, but "nothing of this magnitude," said Brian Ketterer, southern field division chief of California State Parks.

“This is a naturally eroding coastline,” Giles said. “There’s really no rhyme or reason, but that’s what it does naturally.”