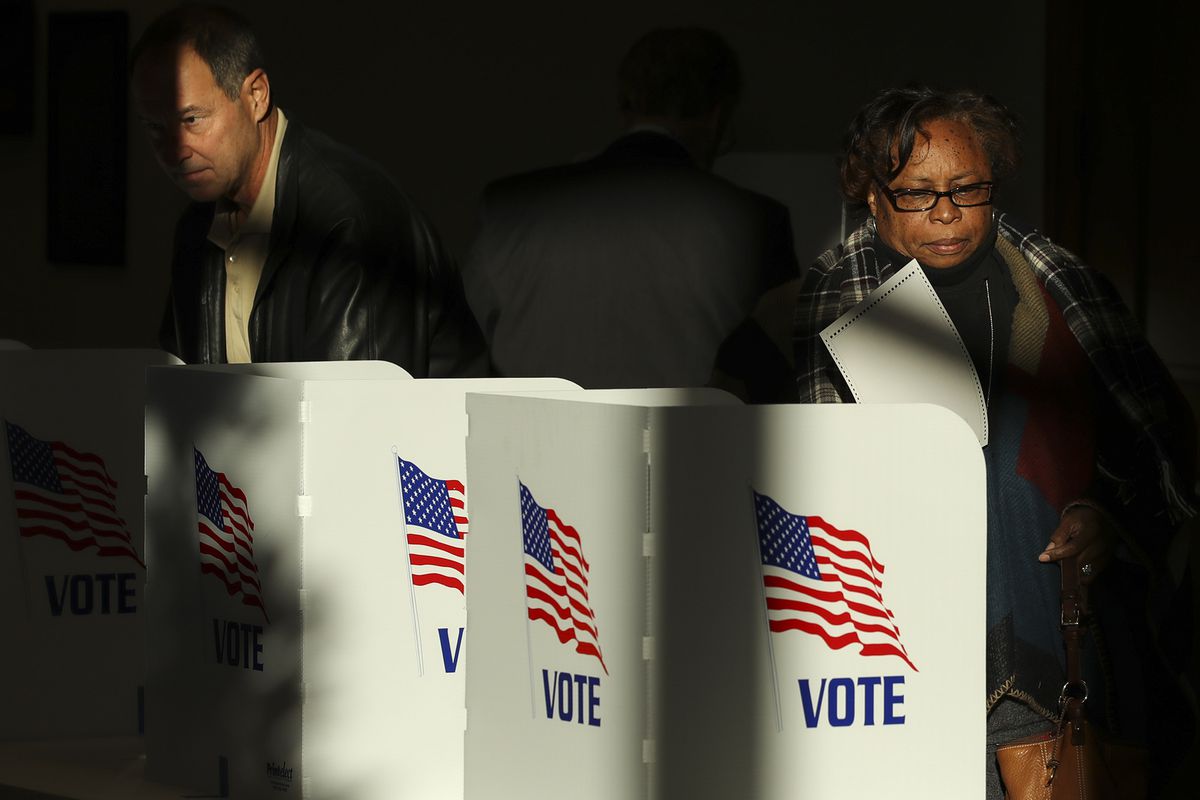 Mississippi has the highest percentage of African Americans of any state in the U.S. It hasn’t elected a black official statewide in more than 130 years. Jennifer Riley Collins wants to break that streak.

To become Mississippi's first black attorney general, Collins, a decorated U.S. Army colonel and civil rights lawyer, is getting help from the country's first black attorney general, Eric Holder. He's leading a lawsuit aimed at the state's 1890 constitution, which more than a century later still has provisions expressly crafted to stop African Americans from getting elected.

If successful, the federal suit would scrap rules requiring candidates for statewide office to win both more than 50% of the popular vote and more than half the state's 122 state legislative districts -- two-thirds of which are majority white. If a candidate doesn't meet both conditions, the state House of Representatives chooses the winner regardless of who got the most votes.

As racial divisions emerge as a subtext in the 2020 U.S. presidential race, the litigation could rewire the power structure in one of the nation's reddest states. Even if unsuccessful, it is bringing fresh attention to an extreme example of voter suppression: In Mississippi, racial animus isn't just a subtext. It's codified in the text that governs the state, lawyers and state politicians say.

"Our system was specifically designed to minimize the chances of an African-American being elected to statewide office in Mississippi,'' said Democratic House Minority Leader David Baria.

The U.S. Supreme Court blessed partisan-drawn political boundaries in a June ruling, six years after the court weakened minority-voting protections across the U.S. But Mississippi stands out as an example of the consequences of gerrymandering on steroids.

"I can't think of another law I've been involved in challenging that was put in place specifically to discriminate against black voters and would have such a profound statistical effect on their ability to elect a state official statewide,'' said Marc Elias, who is involved in the Holder case and is considered one of the country's top Democratic elections attorneys.

Sharing a fish dinner with two colleagues at the wood-paneled Parlor Market near the Capitol in Jackson, Baria said the state's election system is outrageous even among "the other racist states.''

"Even Alabama doesn't do this,'' added lawmaker Earle Banks.

The Holder suit was filed against Secretary of State Delbert Hosemann and Speaker of the House Philip Gunn, both Republicans. In a response to the suit, attorneys for them rejected the claims of racial intent.

"Neither the Speaker nor the Secretary wish to defend the motivations behind a law allegedly enacted with racial animus," the response stated. "However, both the allegations in the complaint and the timing of its filing demonstrate that this lawsuit is not about race, and it is not about vindicating alleged wrongs to plaintiffs' rights to vote -- it's about partisan politics."

The Mississippi power structure has survived both the Democrats who created it and the Republicans who now oversee it.

But just this week a federal appeals court affirmed a ruling that Mississippi's legislature illegally gerrymandered a state Senate district in 2012 by adding a portion of a wealthy predominantly white county to the poorer Delta counties to dilute black voters there. About a third of the state's African-Americans live in the Delta region.

The fight in Mississippi is part of a larger political battle over voting rights prompted by the changing demographics of the electorate. Holder is fighting gerrymandering across the U.S. with his National Democratic Redistricting Committee, which Elias said looks for "provisions that are going to affect the voting rights of individuals in ways that could, down the road, affect redistricting.''

In Mississippi, the voting-eligible black population is nearly 37% of the total -- the highest of any state, according to the most-recent U.S. Census.

The white men who penned the state constitution -- then part of the segregationist Democratic Party -- made no secret of their intent, saying openly that they wished to blunt African Americans' post-reconstruction political power. Mississippi's senior U.S. senator at the time, James George, called the 1890 constitutional convention to create a governing document that would ensure "a home government, under the control of the white people of the state.''

The constitution used proxies for race to discriminate against black voters without saying so outright in its text. Most have been outlawed over time.

The surviving provisions are the target of two federal lawsuits: Holder's, which was filed by the Mississippi Center for Justice in Jackson, and a consolidated suit by the justice center and the Montgomery-based Southern Poverty Law Center. The latter targets language intended to strip voting rights from black felons but not whites. Daniel Jordan, a federal judge appointed by President George W. Bush, granted that suit class-action status in February.

Almost one in 10 Mississippi adults was disenfranchised in 2016 (the most recent statistics), more than triple the national rate. Nearly 16 percent of the state's African-American adults have lost their voting rights, according to The Sentencing Project.

The fight over Mississippi's constitution reflects a national one over how easy it should be to vote. Democrats have pushed convenience while Republicans have advocated stricter limits in the name of preventing voter fraud, including President Donald Trump's short-lived election integrity commission in 2017.

The issue for both major political parties is the population growth of demographic groups across the nation that have traditionally voted for Democrats, at the same time the recent U.S. Supreme Court decisions have cleared the way for a new wave of restricting voter participation, said Greg Magarian, a constitutional law professor at Washington University in St. Louis.

"The Supreme Court's racial-jurisprudence has been getting more conservative for 50 years,'' he said.

States have enacted voting restrictions that -- like Mississippi's constitution -- don't explicitly say they target minorities but disproportionately affect them, even as they hurt some poorer whites, too. "They target the socially estranged, or people without driver's licenses or who don't know how to use government documents,'' Magarian said.

Even if the effort is driven by partisanship rather than racial intent, the effect is the same, he said: "I wouldn't be surprised if some of these conservative lawmakers don't have a racist bone in their bodies. But you screw over the Democrats, you're screwing over African-Americans.''

Mississippi makes it harder to vote than any other state, according to a study published last year in Election Law Journal, a peer-reviewed legal publication focusing on voting rights. Gerrymandering, a strict voter ID law, and deep legislative disinterest in making voting easier all contribute, as do the surviving barriers in the state constitution, said Corey Wiggins, director of the Mississippi NAACP.

The lawsuit that includes the Southern Poverty Law Center challenges a constitutional list of crimes that cost felons the right to vote. It was designed to capture the mostly non-violent felonies historically believed to be more common among blacks. A state Supreme Court opinion in 1896 declared that the black population was "careless, landless ... and its criminal members given rather to furtive offences than to the robust crimes of the whites." Today, theft costs Mississippi felons the vote. Aggravated assault does not.

The constitution's authors provided a remedy - for whites. To get voting rights back, an ex-convict must find a legislator willing to sponsor a bill in his name, get it passed by two thirds of both the House and Senate and signed by the governor. The intent was a fix "for white men who could negotiate the system,'' according to historian Dorothy Pratt, whose book on the 1890 convention, "Sowing the Wind," is cited in both constitutional challenges.

The provision targeted in the Holder lawsuit has a broader effect. Today, an African-American backed candidate for statewide office needs 55 percent of the popular vote to win enough districts to clear the constitutional hurdle, the suit says.

Holder's group has looked at the data and found the discriminatory law could have "a real effect on electoral outcomes this year,'' says Elias. "It's a fairly unusual circumstance.''

One of the likeliest beneficiaries is white - and could directly impact Holder's long term goal. Mississippi attorney general Jim Hood, the only Democrat in statewide office now, is in a tight race for governor, an office with veto power over redistricting maps.

His current campaign statement: "The candidate with the most votes should win, period.''

Collins, the attorney general candidate and former executive director of the American Civil Liberties Union in Mississippi, also stands to benefit if it succeeds. She hopes the state settles.

“I think Mississippi is ready to move forward,” Collins said in an interview at her downtown Jackson campaign office. “We just have to make sure that barriers that were intentionally put in place to exclude or marginalize one community over another are torn down.”