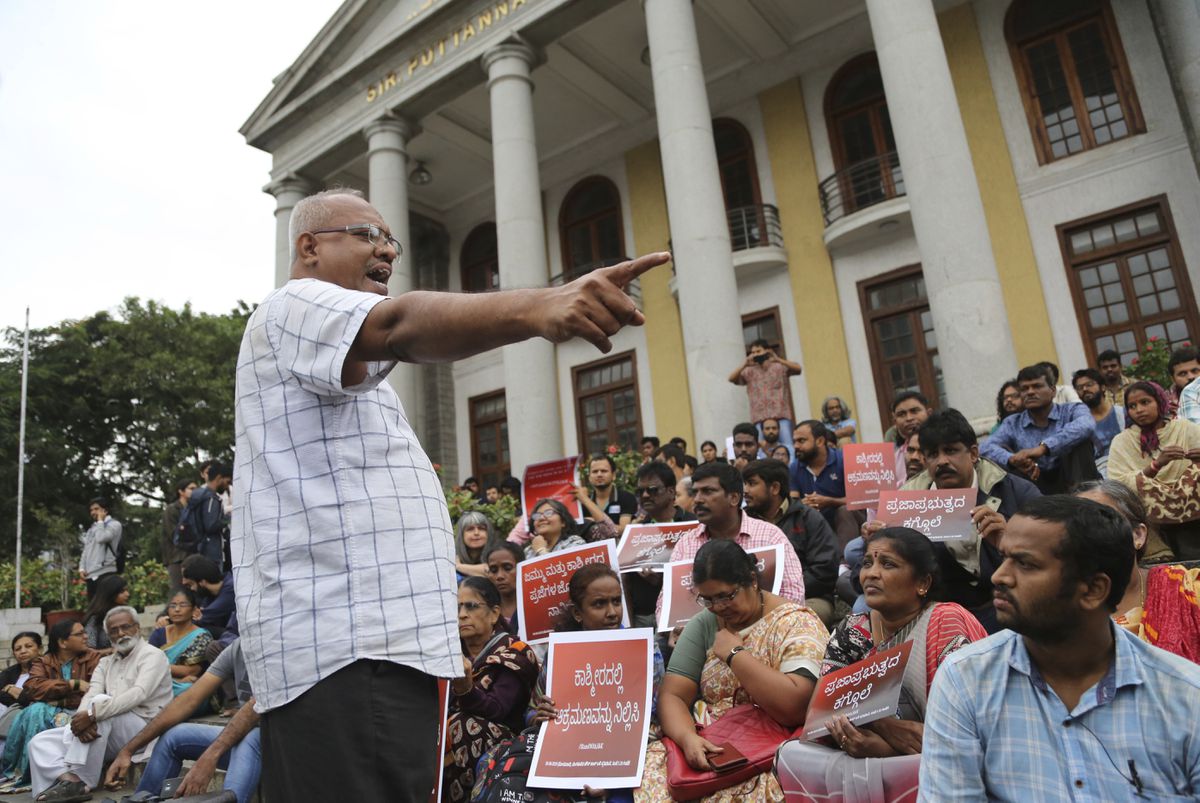 NEW DELHI — India’s Hindu nationalist-led government moved Monday to revoke the special status of Muslim-majority Kashmir, cutting off communications and deploying thousands of troops in the restive Himalayan region amid fears the action could lead to uprisings there.

Home Minister Amit Shah announced the revocation amid an uproar by opposition lawmakers in Parliament over the move.

It also comes as Kashmir is under a security lockdown that has kept thousands of people in their homes and in the dark about the change, which would strip them of long-held hereditary rights to jobs, scholarships and land ownership in the disputed region along the mountainous India-Pakistan border.

The order, which still needs the approval of the ruling party-controlled Parliament, revokes Article 370 of India's Constitution, eliminating the Indian-administered state's right to its own constitution and decision-making process for all matters except defense, communications and foreign affairs. It would also allow Indians from outside the region to permanently settle, buy land, hold local government jobs and secure educational scholarships.

Government critics see the move as an attempt to dilute the demographics of Kashmir, which is predominantly Muslim, with Hindu settlers. Proponents say scrapping Article 370 addresses gender discrimination, since the law stipulates that Kashmiri women who marry people outside the region lose inherited property rights, and will vitalize the economy.

Rebels in Indian-controlled Kashmir have been fighting Indian control for decades. It was unclear when freedom of movement would be eased in the region, but an outpouring of condemnation by Kashmiris living outside the region or who were able to access the internet despite the government blocks suggest there will be resistance to the changes.

The U.S. Embassy in New Delhi issued a security alert, urging Americans to leave the region immediately citing the "potential for terrorist incidents, as well as violent public unrest."

In a statement, Amnesty International India said the move could "cause unrest and wide scale protests in the state."

In Delhi, protesters marched shouting slogans such as "we will not tolerate murder of democracy," and holding signs that read "we stand with Kashmir."

The order by the government of Prime Minister Narendra Modi amounted to a "constitutional coup," activist Kavita Krishnan said, adding that "it is not just about Kashmir. It is also a prelude to destroying the constitutional rights and liberties of all Indians."

Kashmir is divided between India and Pakistan and both claim the region in its entirety. Two of the three wars between the nuclear-armed neighbors have fought since their independence from British rule were over Kashmir.

Most Kashmiris support the rebels' demand that the territory be united either under Pakistani rule or as an independent country, while also participating in civilian street demonstrations against Indian control. About 70,000 people have been killed in the uprising and the ensuing Indian crackdown.

"India is playing a very dangerous game by changing the status of Kashmir through illegal acts," he told a Pakistani TV station from Saudi Arabia, where he is on a pilgrimage to Mecca.

In Pakistan's capital of Islamabad, hundreds of Kashmiri activists rallied against the change in Kashmir's status. The demonstration took place near the diplomatic enclave where India's embassy is located but authorities kept demonstrators away from the building.

The president of the Pakistan-controlled portion of Kashmir, Sardar Masood Khan, also rejected the Indian presidential order and said it could lead to a war with Pakistan.

Mehbooba Mufi, former chief minister for Jammu and Kashmir, tweeted that the Indian government's action was illegal and unconstitutional.

Modi and his Hindu nationalist party won re-election this year on a platform that included promises to do away with special rights for Kashmiris.

Shah, the home minister, also introduced a bill which, if passed, would downgrade Jammu and Kashmir from a state into a union territory with an elected legislature. It would also carve out the region of Ladakh as a separate union territory, ruled directly by the central government without a legislature of its own.

The reaction in Ladakh, a pristine, sparsely populated area that stretches from the Siachen Glacier to the Himalayas, was mixed, said Tsewang Gyalson, a guide whose family's roots in the area are centuries deep.

"Some fear that people from outside will come and start business or will buy lands. Maybe slowly our identity will disappear," he said.

The provision dates to 1927, when an order by the administration of the then-princely state of Jammu and Kashmir gave its subjects exclusive hereditary rights. Two months after India won independence from British rule in August 1947, Maharaja Hari Singh, the ruler of Jammu and Kashmir, signed a Treaty of Accession for the state to join the rest of the union, formalized in Article 370 of the Indian Constitution.

Further talks culminated in the 1952 Delhi Agreement, a presidential order that extended Indian citizenship to the residents of the state but left the maharaja's privileges for residents intact.

Regional parties in Jammu and Kashmir have called attempts to revoke Article 370 an aggression against the people, but many parties in other Indian regions welcomed the decision.

"In a real sense today, Jammu and Kashmir has become part of India. My party supports this resolution," Prasanna Acharya, leader of the Biju Janata Dal party, said in Parliament's upper house.

On Sunday night in Kashmir, government forces laid steel barricades and razor wire on roads and intersections to cut off neighborhoods in Srinagar, the region's main city. The government issued a security order banning public meetings, rallies and movement and said schools would be closed. Authorities also suspended internet services on cellphones, a common tactic to prevent demonstrations from being organized and to stop news dissemination.

The order affects about 7 million people in the region, including journalists who faced difficulties in relaying information.

The recent security deployment added at least 10,000 soldiers and other forces in Kashmir, which was already one of the world's most militarized regions. India also ordered thousands of tourists and Hindu pilgrims to leave the region.

Tensions also have soared along the Line of Control, the volatile, highly militarized frontier that divides Kashmir between India and Pakistan.