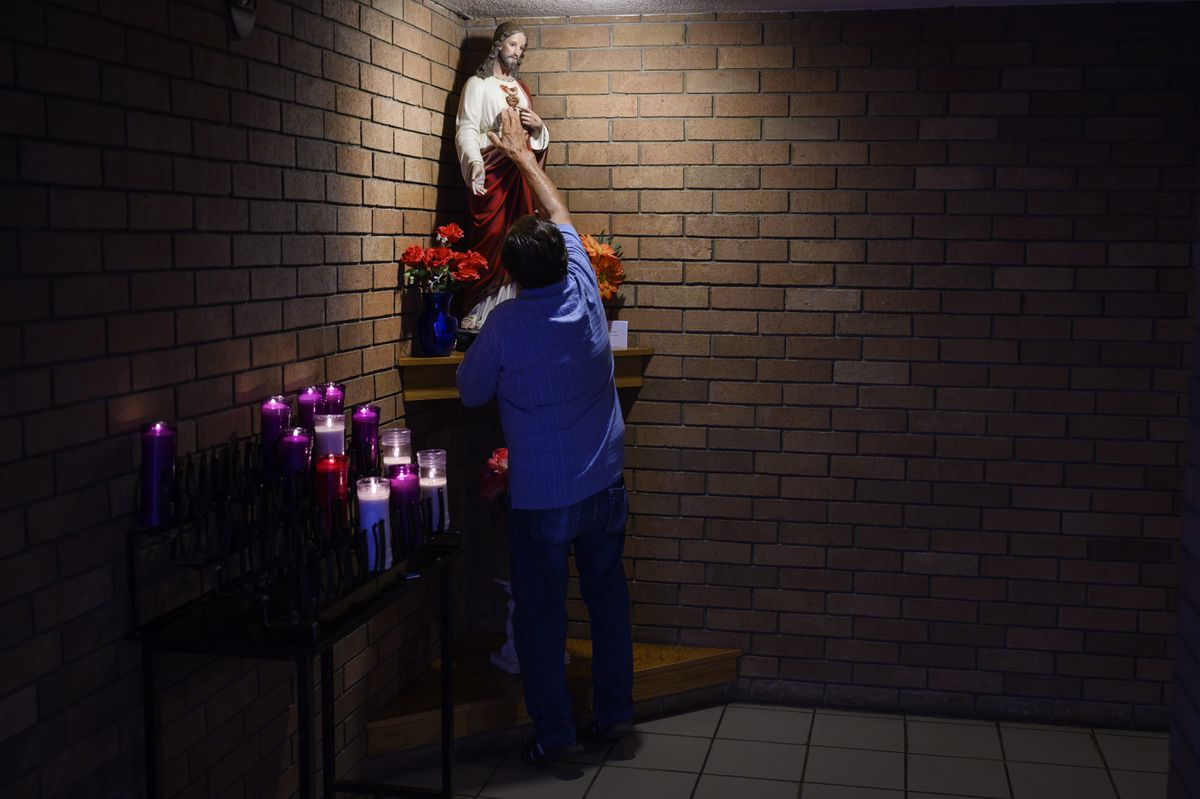 A man touches a statue after Sunday services at the Santo Nino de Atocha church in El Paso, Texas, on Sunday, Aug. 4, 2019. The sermon asked the congregation to think of those who are suffering in the wake of the shooting here and in Dayton, Ohio, that has left at least 29 dead. (Washington Post photo by Michael Robinson Chavez)

A man touches a statue after Sunday services at the Santo Nino de Atocha church in El Paso, Texas, on Sunday, Aug. 4, 2019. The sermon asked the congregation to think of those who are suffering in the wake of the shooting here and in Dayton, Ohio, that has left at least 29 dead. (Washington Post photo by Michael Robinson Chavez)

In El Paso, Dayton and Chicago, a weekend of horrific gun violence seemed on the surface to be another spasm of disconnected mayhem, people taking the lives of others almost at random. But on closer examination, the attacks served to illustrate how America’s lone wolf shooters aren’t really alone.

Whether the proximate cause was political or personal, whether it grew out of ideological indoctrination, mental illness or some toxic blend of factors that left shooters isolated and damaged, each attack demonstrated a troubling disorder festering in modern America.

The 21-year-old man who allegedly killed 20 people doing their Saturday shopping in El Paso, Texas, appears to have taken pains to post a manifesto that leaned heavily on the virulently anti-immigrant rhetoric that inspired recent mass shootings in New Zealand and California, authorities said - though they were still working to confirm its authenticity.

The suspect, Patrick Crusius, did not appear to be part of any organized group, but the four-page screed posted minutes before he opened fire parroted the extreme white supremacist ideology known as "the great replacement" - the idea that newcomers are taking the jobs of white Christians in America and other Western nations.

The alleged killer of nine people in Dayton, Ohio, Connor Betts, was a 24-year-old Chipotle worker and community college student driven by personal grievance rather than political ideology, authorities said. Betts, who was killed by police, shot his own sister among his victims.

Showing up outside a popular bar around 1 a.m. wearing body armor and carrying a high-capacity rifle and extra magazines, the Dayton shooter instantly joined the ranks of gunmen who have learned online, in video games and in countless movies and TV shows how to escalate personal beefs into community-shattering events.

In Chicago, 40 people were shot — three of them fatally — in a series of weekend attacks that authorities attributed to forces that are tragically quotidian in some of the nation’s roughest neighborhoods. The shootings revived a long-standing debate over whether such violence might still be happening if the country had resolved its seemingly eternal battles about guns and economic inequality.

The weekend's violence rekindled an array of other national arguments: over gun rights, over pop culture, over social media and what constitutes terrorism. Amid the overwhelming tragedy of the shootings, the El Paso attack drew special attention to the problem of lone wolf shooters and whether they should be viewed as isolated actors - "sick people," in the words of White House acting chief of staff Mick Mulvaney - or as part of a larger, ideologically-driven movement.

"These are not single shooters," said Daniel Okrent, author of "The Guarded Gate," a history of anti-immigrant bigotry in the United States. "They're a mob with high-powered rifles, people who feel they're part of something bigger. The technology has changed: A mob doesn't have to get together in the street with torches anymore."

The manifesto authorities believe is linked to Crusius said his violence was inspired by the killings of 51 people in March at two mosques in Christchurch, New Zealand, part of a chain of mass slayings linked by the killers’ fears of an invasion that threatened white Christian dominance.

At synagogues in Pittsburgh and Poway, California, Jews were the target. In New Zealand, it was Muslims. In El Paso, the manifesto took aim at a Hispanic immigrants. But the underlying belief system - and much of the rhetoric - was the same, lifted, sometimes word for word, from extremist tracts that circulate widely on anonymous online message boards such as 8chan and Reddit.

"Many of the killers are lone-wolf losers indoctrinated to hate through the Internet, just like Islamic terrorists," former deputy attorney general Rod Rosenstein wrote on Twitter late Saturday. "Killing random civilians to spread a political message is terrorism. F.B.I. classifies it as domestic terrorism, but 'white terrorism' is more precise."

Whatever label is attached to mass shootings committed by anti-immigrant extremists, they should be viewed not as individual acts but as part of a contagion, said J.M. Berger, a researcher on terrorism and propaganda and author of "Extremism."

“Social media allows a lot of people with similar ideological ideas to synchronize their actions,” Berger said. “You’re more likely to commit violence if you know someone who has committed violence. Knowing someone virtually is not that different from knowing them offline, and social media provides a vector for violent contagion to spread. The serial manifestos we’ve seen over the last couple of years serve as a way to ‘know’ someone who has committed violence.”

The notion that a "great replacement" of whites by some other group is being encouraged by powerful forces is often credited to a French writer, Renaud Camus, who wrote a 2012 book called "The Great Replacement." Camus argued that Europe's white majorities are actively being replaced by immigrants from North and sub-Saharan Africa, threatening the character, safety and success of European nations.

In 2017, when white supremacist protesters marched through the University of Virginia campus in Charlottesville, they chanted “Jews will not replace us” and “You will not replace us.” Chatter about the “great replacement” tripled on Twitter between 2014 and 2018, according to a study by a British research group, the Institute for Strategic Dialogue.

On Sunday, Camus denied responsibility for the El Paso shooting but endorsed the ideas Crusius touted in his manifesto.

"It is obviously not 'The Great Replacement,' the book, which causes the mass massacres," Camus wrote on Twitter. "It is the great replacement itself."

But replacement theory did not originate with Camus. Waves of anti-immigrant, anti-Semitic, anti-Catholic and anti-black violence have rolled periodically across America since the early 19th century, reflecting the fear that the livelihoods and communities of those already here were under attack by those just arriving.

"In almost every generation, there's a generalized fear or anxiety in which the most recent immigrants are seen as taking the jobs of people who've been here a longer time," Okrent said.

In the 1840s, Protestant rioters in Philadelphia attacked Irish Catholics. In the 1850s, Protestant lynch mobs in Louisville, Kentucky, targeted German and Italian Catholics. In 1871, whites massacred Chinese immigrants. And in each generation, leading politicians adopted some of the anti-other rhetoric of the mobs, even if they rejected the violence itself.

Okrent offered the example of the New Orleans mob that lynched 11 Italian immigrants in 1891 after they were acquitted on charges of killing the city's police chief. Then-congressman Henry Cabot Lodge, later a senator from Massachusetts, said that "such acts as the killing of these 11 Italians do not spring from nothing without reason or provocation." Rather, he said, such violence stems from "the utter carelessness with which we treat immigration in this country."

In 1924, when Congress debated tight new restrictions on immigration, especially from eastern and southern Europe, even politicians who fought to keep the borders open were dismissive of accepting newcomers from other parts of the world. Rep. Fiorello LaGuardia, a half-Italian, half-Jewish representative of one of the country's most ethnically diverse districts and later New York mayor, opposed the restrictions but said the country should exclude Asians because they do not assimilate into American culture.

"It is inherent to the species that everybody has to have somebody to look down on and to fear," Okrent said.

Violence against newcomers tends to surge in periods of economic distress and rapid change, and that's true whether the attacks come from street mobs or individuals, historians said. Such acts also can be encouraged by anti-immigrant rhetoric from political leaders, though there's not always a direct relationship between the two.

For example, Calvin Coolidge was vice president in 1921 - he would become president two years later - when he said that "Biological laws tell us that certain divergent people will not mix or blend." At that point, anti-immigrant sentiment and violence had already been prevalent for several years.

Anti-immigrant violence is often motivated by a sense of crisis, Berger said in an email exchange, which "can come from many quarters, including extremist propaganda, other kinds of propaganda, media coverage and the utterances of politicians. . . . Themes like 'the great replacement' (whether the extremists actually read the book) help unify these disparate influences under a single conceptual umbrella."

In El Paso, the manifesto railed against a "Hispanic invasion." When it was posted, its author urged his audience on 8chan to "do your part and spread this brothers!"

In a growing number of shootings, online manifestos have emerged as a way for extremists simultaneously to reach for attention and to spread their ideology. The technology is new, but the basic approach has been around for centuries.

From its earliest days in the 1920s, Germany's Nazi party, then a small collection of extremists staging attacks in the streets of Munich, used their party newspaper to enhance the impact of each violent assault on the city's Jews and elected officials.

And American neo-Nazis in the last decades of the 20th century relied heavily on the influence of a novel by extremist William Pierce, "The Turner Diaries," to motivate a wave of white supremacist terrorist attacks, including Timothy McVeigh's bombing of a federal building in Oklahoma City in 1995; the attack killed 168 people.

“Extremism generally thrives in situations where people are experiencing uncertainty about their identities,” Berger said. “And the political environment right now is very conducive to this.”