Where are the salmon and the orcas? Tribe, scientists grapple with unprecedented disappearance in Washington waters 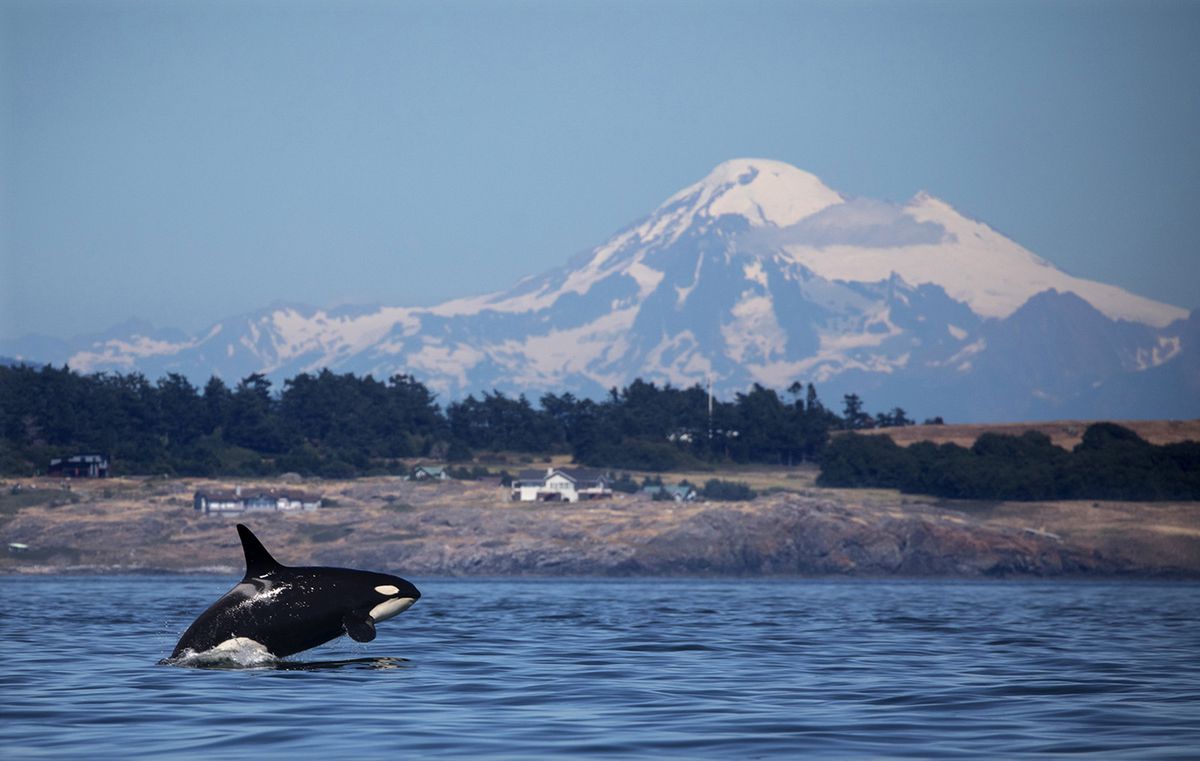 ABOARD THE LENGESOT IN THE SALISH SEA — The tote was loaded and full of water, the cedar boughs cut and stacked on deck. But as Lummi tribal members headed out on their traditional waters to offer a ceremonial feeding of live chinook salmon to the endangered southern-resident killer whales, neither whale nor fish was anywhere to be found.

In this historic summer of unthinkables, day after day is passing without the orcas and fish that normally enliven the waters of the inland Salish Sea.

Tuesday marks a month since the southern residents were last seen in their usual home waters in and around the San Juan Islands. Usually present nearly every day at this time of year, the orcas have shown up only a handful of times this year, and then, only for brief visits before quickly leaving again for waters of the outer coast.

Meanwhile, the chinook runs to the Fraser River the whales are usually hunting in their ancient foraging grounds have cratered. And on a recent weekday on the waters of northern Puget Sound and the San Juan Islands, but for a cluster of oil tankers staging offshore from the refineries in and around Cherry Point, the waters were quiet and still.

“Do you have any fish?” Raynell Morris asked on her cellphone, calling one fisherman after another from the boat. Senior policy adviser in the Sovereignty and Treaty Protection Office of the Lummi Indian Business Council, she and other Lummi tribal members normally would have loaded the tote with fish for the whales before heading out. But with no fish to be had at home, they decided to chance getting some from fishermen as they were out on the water.

As she dialed, Richard Solomon prepared. A spiritualist for the Lummi Nation, his prayers were to be offered along with the fish for J17, a matriarch of the southern residents not yet seen this spring or summer, and feared dead. And for K25, also missing. And for the extended family of the southern residents, or in the Lummi language, qwel lhol mech ten: the people who live under the sea.

[How a generation of killer whales was taken from Puget Sound]

He prayed for the whales as the boat sped over the glassy sea. “We want to find food for you. Please come home. We ask for your help, we need your courage, your wisdom and your knowledge.”

The whales have to travel, though, wondering how to keep their families fed, Solomon said. “They are telling us, giving us the message about the demise of the salmon.”

In this season of scarcity, human fishermen are hurting, too. The Washington Department of Fish and Wildlife has entirely closed the chinook fishery in the San Juan Islands for the month of August, because of low returns to Puget Sound, including the Stillaguamish and Nooksack rivers and Hood Canal. Canada also has closed and cut back recreational and commercial fishing seasons on Fraser River chinook in an effort to get more fish back to the spawning grounds.

“We have seen chinook populations decline for the past number of years, but this year is the worst. It is a real challenge and a great concern,” said Jocelyn Lubczuk, spokeswoman for the Department of Fisheries and Oceans Canada. “This is part of the biodiversity loss that is part of climate change, the warming water is posing a huge risk to chinook salmon.”

In addition to long term human damage causing the decline, a natural rock slide also is imperiling the Fraser River salmon. Canadian officials are scrambling to help salmon blocked by a 16-foot-high waterfall created by the slide.

After hours of searching for whales and fish, the Lummi decided to offer what they could.

Aaron Hillaire, of the Lummi Nation, docked the tribal police boat used for the voyage at an ancient Lummi village site in the San Juans, dating back more than 4,000 years. Solomon had painted his face for spiritual protection. An ermine skin flashed white from his cedar hat. Morris, carrying the cedar boughs, followed him as he walked ashore.

Solomon stopped and rinsed his face with cool, clean water. On the way to the village site, he suddenly stopped again, and plucked ripe blackberries, fat and succulent. He held onto them though, without eating a one.

Then Morris and Solomon walked down the beach to the water’s edge, where with song and prayer, they offered the berries, floated on cedar boughs, to the whales.

Afterward, sitting amid driftwood logs on the beach, Solomon scooped up a heap of white shell fragments in his fisherman’s hands, still red from ceremonial paint. He held the shells, and their memories. They had calved off from an archaeological deposit called a shell midden: bits of shell and bone left in the ground from cooking. The midden was layered in white bands in the ground stacked head-high along the shore.

As he walked back to the boat, Solomon paused, looking out over the cove, and sang his grandmother’s song. She had grown up here. It felt so good to be back, he said, with the memories of this place. “This is when we get to time travel,” he said, still holding the shells, pouring them slowly, carefully, from one palm to the other. They made a soft rattling sound.

Ken Balcomb, of the Center for Whale Research, keeps the official count of southern residents, and usually announces the whales born and died since the previous July. But for scientists, too, it is a summer so far without precedent. Research scheduled for summer encounters with the whales has been impossible to conduct.

Balcomb said he would go out in search of the southern residents to take stock if they haven’t come home by mid-August, when Canadian scientists end their field season. Those researchers have recently been seeing the southern residents on the west side of Vancouver Island, he said. L pod was even seen off the coast of California, in Monterey Bay in April, searching for fish.

Morris said she was not yet ready to call the offering the Lummi made for J17 and K25 a memorial. But she knows their family is in trouble.

“We are here for them, and all the whale people,” Morris said. “Famine; there is no word in Lummi for what is happening.”