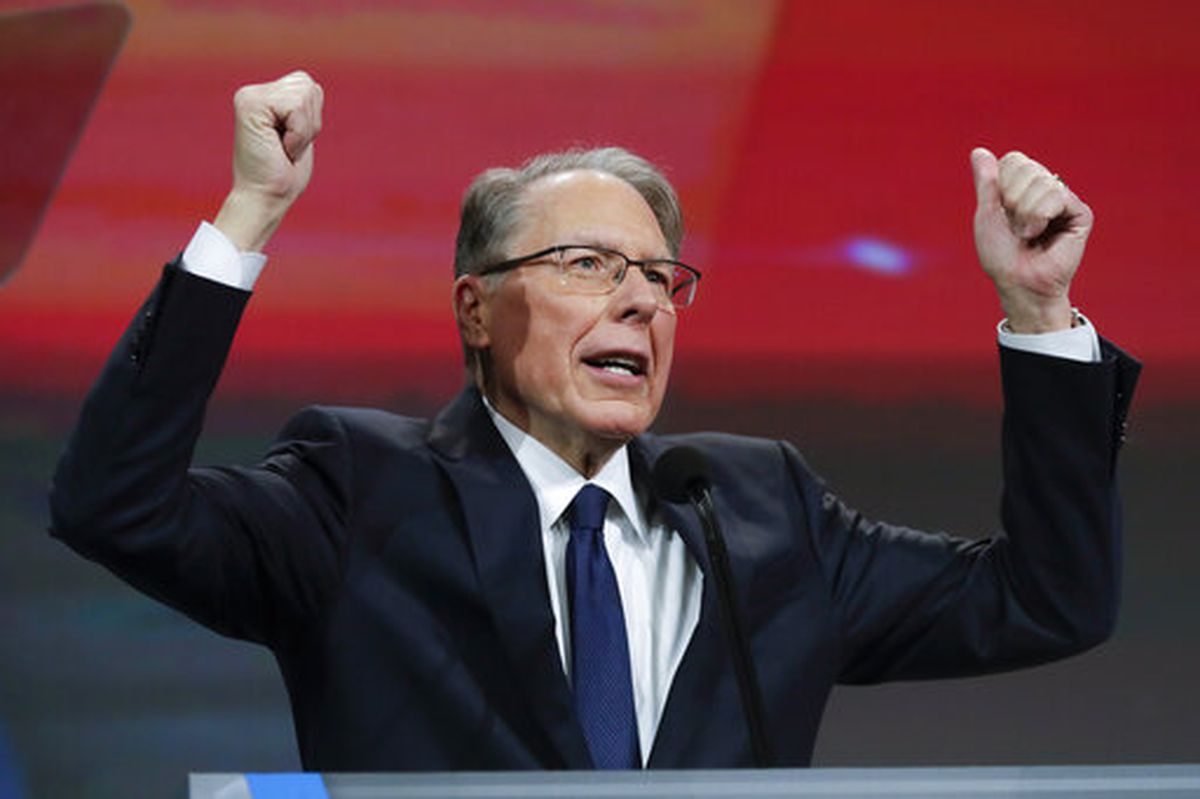 National Rifle Association Executive Vice President Wayne LaPierre speaks at the NRA Annual Meeting of Members in Indianapolis, Saturday, April 27, 2019. On Saturday, retired Lt. Col. Oliver North has announced that he will not serve a second term as president of the NRA amid inner turmoil in the gun-rights group. (AP Photo/Michael Conroy)

National Rifle Association Executive Vice President Wayne LaPierre speaks at the NRA Annual Meeting of Members in Indianapolis, Saturday, April 27, 2019. On Saturday, retired Lt. Col. Oliver North has announced that he will not serve a second term as president of the NRA amid inner turmoil in the gun-rights group. (AP Photo/Michael Conroy)

The chief executive of the National Rifle Association sought to have the nonprofit organization buy him a luxury mansion last year after a mass shooting at a Florida high school, selecting a French country-style estate in a gated Dallas-area golf club, according to multiple people familiar with the discussions.

Wayne LaPierre, the longtime head of the NRA, told associates he was worried about being targeted and needed a more secure place to live after 17 people were gunned down at Marjory Stoneman Douglas High School in Parkland, Florida, the people said.

LaPierre and his wife, Susan, were intensely involved in the selection of the property, rejecting an upscale high rise in Dallas with numerous security features in favor of a 10,000-square-foot estate with lakefront and golf course views in Westlake, Texas, on the market for about $6 million, according to emails and text messages described to The Washington Post.

The couple wanted to secure a social membership at the exclusive golf club in the gated community, the messages show. They also sought the purchase of two vehicles and to keep the current owner's "golf cart if possible," according to one email. One aspect of the property that concerned Susan LaPierre was the lack of closet space in the men's closet of the master bedroom, the emails show.

The discussions about the estate, which was not ultimately purchased, are now under scrutiny by New York investigators. The transaction was slated to be made through a corporate entity that received a $70,000 wire from the NRA in 2018, according to the people, who spoke on the condition of anonymity because of the ongoing investigation.

The entity was created at Wayne LaPierre's request by a law firm working for Ackerman McQueen, the NRA's longtime ad agency, according to the people.

The origins of the idea to buy the mansion, its proposed purpose and the reason the deal never went through are now being fiercely disputed by the NRA and Ackerman McQueen, which are locked in a bitter legal fight.

In a statement late Tuesday night, Ackerman McQueen said LaPierre had sought the ad firm's assistance with the real estate transaction, a proposal it said alarmed company officials. "Actions in this regard led to Ackerman McQueen's loss of faith in Mr. LaPierre's decision-making," the firm said.

For their part, NRA officials said that the real estate purchase was suggested in early 2018 by Ackerman McQueen as an investment that would be managed by the ad firm's top executives - and that it was ultimately rejected by top NRA leaders. "The agency introduced Mr. LaPierre to its preferred local real estate agent, directed a tour of multiple homes, and established a company to manage the investment," NRA spokesman Andrew Arulanandam said in a statement late Wednesday. "No matter, Mr. LaPierre ultimately rejected the opportunity and not one dime of the NRA's money was spent on this venture." The LaPierres did not respond to requests for comment.

The New York attorney general's office is now examining the plan for an NRA-financed mansion as part of its ongoing investigation into the gun lobby's tax-exempt status, in which it has subpoenaed the group's financial records, the people said.

A spokesperson for New York Attorney General Letitia A. James declined to comment.

New York attorney Daniel Kurtz, an expert in nonprofit law, said such a home purchase could have violated New York charity law, which requires all transactions benefiting the group's insiders to be "fair, reasonable and in the corporation's best interest."

"There's no way they could defend a $6 million house for the chief executive as reasonable," Kurtz said. "This is like the worst kind of corporate waste because buying the house does nothing to advance the interests of the NRA. How can you explain that? It's not like he's been underpaid."

LaPierre received a salary of $1.37 million for his role as executive vice president in 2017, plus an additional $67,289 in compensation, according to the NRA's latest tax filing.

Susan LaPierre, co-founder of the NRA Women's Leadership Forum, a coalition of female philanthropists who support the Second Amendment, sometimes travels with her husband on NRA business and accompanied him to the Bahamas after the December 2012 shooting in Newtown, Connecticut, at Sandy Hook Elementary School.

On Wednesday, The Post sought comment on the proposed mansion purchase from the 73 current members of the NRA's board, along with three who resigned last week. Most did not respond. The several who did rallied to the defense of LaPierre, accusing Ackerman McQueen of distorting details about the real estate discussions.

"It's a total misrepresentation of the truth, but I can't get into the details," said Tom King, a board member and president of the New York State Rifle and Pistol Association. "It's all bogus."

"They were just trying to find a safe house to put him in," said LeRoy Sisco, a retired businessman in Texas who has been on the board about 10 years. "Other people could use it too. They were just saying that they needed to get him to a safe place."

The LaPierres's real estate hunt began after the February 2018 massacre in Parkland. Days later, LaPierre publicly attacked gun control advocates as "elites" who "care not one whit about America's school system and schoolchildren."

Behind the scenes, LaPierre was telling associates he was worried about his safety and that the location of his home in Virginia was easy for potential attackers to find, according to people familiar with the discussions.

The Wall Street Journal first reported that LaPierre asserted he needed a new residence for security reasons in the wake of the Florida shooting.

Around Easter, the LaPierres toured the mansion in the Vaquero golf club community and were impressed by the property, according to people familiar with their visit.

The four-bedroom, nine-bath home in a gated golf course community northwest of Dallas resembles a French chateau, with a stately boxwood-lined drive, a formal courtyard, vaulted ceilings and an antique marble fireplace, according to its online real estate listing.

The couple negotiated the furnishings they wanted to keep, among other details, according to emails and text messages.

In one May 21 email, an Ackerman McQueen staffer listed for Susan LaPierre all the issues she had said she wanted to resolve before closing.

The email mentioned her concern about the lack of closet space. According to the listing, the master bedroom has two walk-in closets with a custom closet system and sitting area.

"The men's master bedroom and bathroom need some changes. There isn't much closet space. Susan will have specific input here and can probably work with the eventual interior designer to get this accomplished," according to the email.

The couple sought a July 1, 2018, closing so they could move in August, according to the people familiar with the discussions.

On May 25, the NRA wrote a check for $70,000 and wired it to the account of the corporate entity created for the purchase, according to the records turned over the New York attorney general.

NRA officials declined to comment on the emails or the wire transfer.

In a statement Tuesday night, William Brewer III, an attorney for the NRA, said the real estate purchase was pushed by Ackerman McQueen.

"The deal was vetoed by the NRA after its full terms - including Ackerman's intent to spend NRA money - became known to Wayne LaPierre," he said. "Not a cent of NRA money was ultimately spent. Any suggestion to the contrary is untrue."

"Frankly, this is yet another example of Ackerman twisting the truth to promote a false narrative," NRA spokesman Andrew Arulanandam said in the statement. "These accusations against the NRA and Mr. LaPierre are just the latest installment of a smear campaign - a reputational attack designed to enable a small band of wrongdoers to avoid scrutiny of their own actions."

Ackerman McQueen called the NRA's assertions that the ad firm drove the effort to purchase the mansion "patently false."

"The truth is that Mr. LaPierre decided to proactively propose his plan to leave his current residence and purchase a new residence," the company said in a statement Tuesday night. "Acting outside the parties' Services Agreement, Mr. LaPierre sought the involvement of Ackerman McQueen. Ackerman McQueen refused to proceed with this transaction."

According to the people familiar with the real estate negotiations, the corporate entity created for the mansion purchase returned the $70,000 to the NRA on June 14, 2018.

Angus McQueen, the now-deceased chief executive of the ad firm, had learned about the location of the property and was furious about LaPierre's claim that he needed the property for security reasons, the people said.

"He said 'The scales fell from my eyes,' " said one person familiar with the discussions. "They were buying a Taj Mahal on a golf course with a social membership."

In a statement last month, Ackerman McQueen said it decided to stop paying a series of expenses for NRA executives, including LaPierre, in 2018 out of concern they were "suspicious" and their true nature was concealed from the NRA board and members.

The firm said it believed "that NRA executives were intent on personal financial activity and transactions."

In recent months, leaked documents have been published showing that the NRA paid $542,000 for private jet trips for LaPierre, including a trip to the Bahamas with his wife after the Sandy Hook shooting and an array of Italian designer suits as well as the rent for a summer intern's apartment.

The expenses were first paid by Ackerman McQueen, which then billed the NRA as part of its multimillion-dollar annual contract, according to people familiar with the arrangement.

Meanwhile, The Post has reported, 18 members of the NRA's 76-member board received money from the group for services during the past three years, raising questions about the rigor of their oversight.

The discussions about the luxury house in 2018 came as the NRA was in deepening financial trouble: The nonprofit organization was on track to run a deficit for a third year in a row, had cut back dramatically on its core mission of gun safety and legislative work and frozen its employee pension plan.

Douglas Varley, an attorney whose practice focuses on tax-exempt organizations, said if the NRA had purchased a house for LaPierre, it would have had to justify to the IRS that he needed it to do his job. Otherwise, the NRA would have had to report the purchase in its tax filing as part of LaPierre's compensation.

"Both of those strike me as extraordinarily high bars to get over," Varley said.

Even though the real estate deal didn't go through, Varley said, the activity around the house "says something about how the organization is being run and for whose benefit. These things are fundamental to nonprofit organizations."