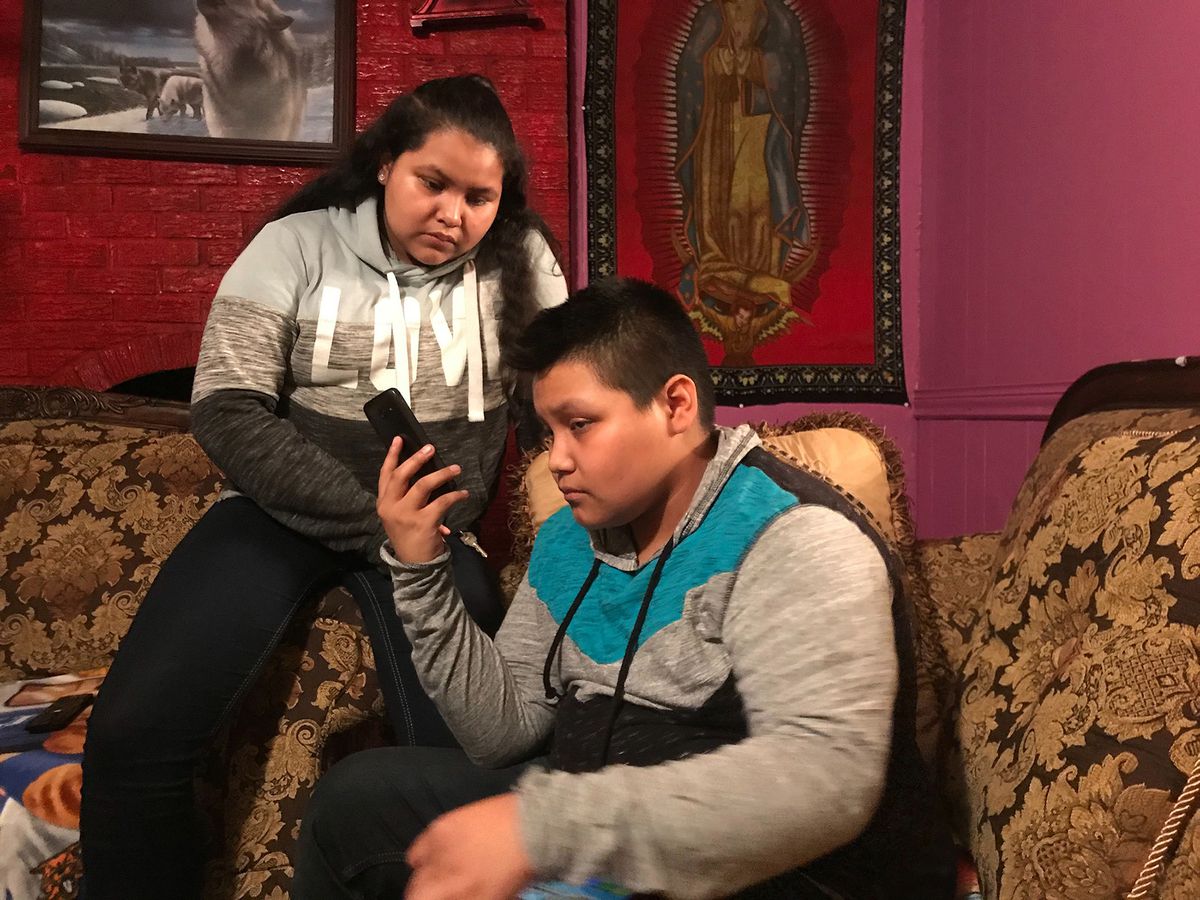 Juana Andres, 12, and Eduardo Andres, 14, take a call from a relative as they wait for news of their mother and father, who were detained by federal immigration officials at their workplace in Morton, Miss., on August 7, 2019. (Jenny Jarvie/Los Angeles Times/TNS)

Juana Andres, 12, and Eduardo Andres, 14, take a call from a relative as they wait for news of their mother and father, who were detained by federal immigration officials at their workplace in Morton, Miss., on August 7, 2019. (Jenny Jarvie/Los Angeles Times/TNS)

Beside her, older brother Eduardo, 14, stared into his iPad, tears rolling down his cheeks.

It had been about 36 hours since federal immigration agents with guns had burst into the Koch Foods Inc. chicken processing plant in the heart of Morton, Miss., rounding up their mom and dad and fastening plastic zip ties to their wrists before packing them onto buses and hauling them off.

Some locals said the workers -- immigrants without papers to live in the U.S. legally -- had been rounded up with little more dignity than the chickens that enter the plant in rumbling 18- wheelers. But Juana had little to say about politics or race or immigration.

"I just want my mom and dad to come home, " she said quietly.

Juana still did not know where federal agents had taken her parents -- Guatemalans who have lived and worked in this small Deep South town for about eight years. She did not know whether they would come back to their cozy four- bedroom ranch home, decorated with lavish shrines to the Lady of Guadalupe, red and green Christmas baubles, plush toys and cherub figurines.

Her dad 's old AT &T phone was their only lifeline.

Hours after her mom and dad were taken away, it buzzed with an unknown number and Juana quickly handed it over to her uncle Pedro.

It was her mom. Sobbing, Ana Andres delivered a simple message to her brother : "Take care of the kids and give them food."

Anguished families A sixth- grader, Juana had just started her second day back at middle school Wednesday when federal agents poured into the sprawling Koch Foods plant just a block away. As the tardy bell rang and she settled into her math class, her dad was finishing up his night shift and her mom starting her work day.

In a scene that played out at poultry and other food- processing plants across Mississippi, federal agents gathered hundreds of other Latino workers into rooms to question them and screen for anyone who was in the U.S. illegally. Across the state, about 680 workers were detained in the largest workplace raid in a decade.

Nowhere was the anguish more visible than in Morton, population 3, 600. After 200 workers were detained, anxious families gathered in the sweltering heat outside the hulking plant, an ugly patchwork of corrugated metal buildings and trailers sealed off from the rest of the town by a strip of chain- link fence.

"Government, please show some heart, " an 11- year- old girl sobbed in a widely shared video. "Let my parents be free like everybody else, please .... I need my dad and mommy."

Some families circled the block in pickups and sedans while others pulled out lawn chairs and waited in their vehicles, desperate for any information about their loved ones.

Juana and her brother did not find out about the raid until that afternoon, when their uncle checked them out of school at the end of sixth period.

"ICE got your mami and papi, " he told them. "They went inside the work and got them."

Back home, where the extended family lived, her parents ' bedroom was exactly as they left it, with pairs of black FUBUs, sandals and cowboy boots scattered at the foot of the bed. A letter from the Internal Revenue Service lay on the dresser next to a crucifix.

Pedro ushered her and Eduardo into the bedroom and had them kneel together in a circle.

Waiting to hear After dusk Wednesday, buses began to arrive at the plant to return some of the immigrants after processing. By Thursday night, Immigration and Customs Enforcement said they had released 303 of the immigrants and presented them with charging documents that required them to appear in court before a federal immigration judge.

But still many children -- not just Juana and Eduardo -- were missing their parents.

"I 'm just ashamed of our country, " said Brittany Reynoso, a 31- year- old mail delivery worker and native Mississippian, as she waited outside the plant in her SUV with her husband, a Guatemalan construction worker. "We 're supposed to be one country under God, but instead of helping our fellow man, we 're just knocking him down."

As the only English speakers in the family, Juana and Eduardo took on the role of interpreters as their aunts and uncles struggled to navigate the immigration system, asking questions to find out where their parents were and pass on complicated information about processing centers and A numbers.

Bypassing the crowds outside the plant Thursday, they headed straight to a church with their uncle to get legal advice. After hiring an immigration attorney, they tried to pick up their parents ' black Tacoma pickup and silver Toyota Corolla from the plant 's gravel parking lot. The company 's security would not let them take the vehicles without paperwork, so they headed back home.

Opening the refrigerator for a can of vanilla- orange Coke, Juana reached past the pots of black beans and chicken stew and a platter of tamales made by her mother.

Usually, about this time her mom would be getting home, sidestepping their dogs Champ and Champion and the flock of chickens in the backyard.

As her dad caught his last hours of sleep before his night shift, her mom would take off her plastic hair cover and rubber work boots and head straight to the bathroom to rinse off the putrid stench of chicken. She would then bustle about in the kitchen.

Not sure what to do, Juana retreated to the bedroom she shared with her aunt and brother and curled up against a plush soft toy, a gift from her mother.

Numb, she scrolled through YouTube, watching a string of videos -- "Hey so i went to the worst reviewed makeup artist on yelp in my city " and "I only ate blue food for 24 hours " -- in silence.

Looking for work Juana 's parents, Martin Pascual and Ana Andres, are part of a wave of Latin American immigrants who have moved to Mississippi in the last 25 years to work in poultry plants.

Growing up in San Miguel Acat án, a small town in Guatemala 's western highlands, the family scraped a living off the land, growing corn and raising chickens. But there were no jobs, so they decided to cross Mexico and move to the United States to make money.

First they lived in Roosevelt, a suburb of Birmingham, Ala., and worked at a chicken plant. But after Eduardo and then Juana were born, they moved to Mississippi after hearing the Morton plant paid about $200 more a week.

Juana 's parents didn 't grumble about the work at the factory, where hundreds of workers lined up in rows to perform a task -- stun, slaughter, pluck feathers, clean, cut or debone.

Cutting chicken into pieces was dirty work, but it paid the bills and allowed them to buy a modest 1, 300- square- foot brick ranch home that they squeezed into with two uncles, an aunt and cousin Sandra.

They were not the first Latin American immigrants to move to Morton, founded as a stagecoach town just a few years before the Civil War. In 1994, the poultry plant, which was then locally owned and trying to tamp down union organizing among African American workers, sent recruiters to Miami in search of immigrants who would be more accepting of low pay and poor work conditions.

After advertising in Cuban stores and local newspapers, the company sent busloads of immigrants on Greyhound buses and offered them housing in dilapidated trailers, according to Angela Stuesse, author of " Scratching Out a Living : Latinos, Race, and Work in the Deep South." Gradually, word of mouth attracted waves of immigrants from Cuba, the Dominican Republic, Nicaragua, Uruguay and Guatemala.

Mississippi is now the nation 's fifth- largest chicken- producing state. But the future of the economy is now in question.

After the raids, the poultry plant that Pedro worked at 10 miles away in Pelahatchie had shuttered and he had no idea whether the plant would reopen or, if it did, he would be able to work there.

As the kids stared at their screens, Pedro ducked into his bedroom with his phone to discuss the situation with a string of family and friends.

Not only had he taken on the responsibility of looking after Juana and Eduardo, but he had already shelled out $1, 000 in deposits for an immigration attorney to help with the release of their parents. The overall cost, paid in installments, would be $5, 000.

"My mind is in another world, " he said when he put down his phone for a minute. “I am just thinking about family.”