Officers watching Epstein were on overtime due to staffing shortage, union president says 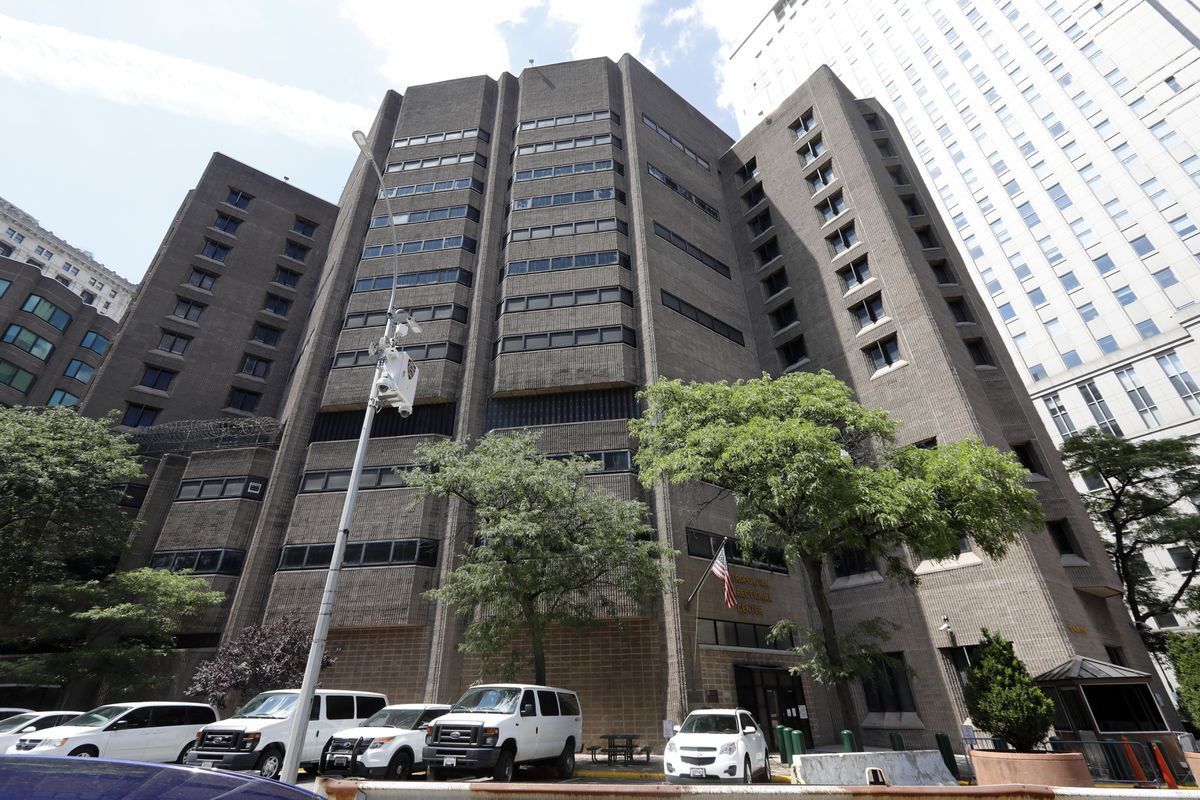 This July 1, 2019 photo shows the Manhattan Correctional Center, in New York. Financier Jeffrey Epstein died by suicide while awaiting trial on sex-trafficking charges in New York, a former law enforcement official said Saturday. He was found in his cell at the Manhattan Correctional Center Saturday morning, according to the officials, who was briefed on the matter but spoke on condition of anonymity because he wasn’t authorized to discuss it publicly. The medical examiner’s office in Manhattan confirmed Epstein’s death. (AP Photo/Richard Drew)

This July 1, 2019 photo shows the Manhattan Correctional Center, in New York. Financier Jeffrey Epstein died by suicide while awaiting trial on sex-trafficking charges in New York, a former law enforcement official said Saturday. He was found in his cell at the Manhattan Correctional Center Saturday morning, according to the officials, who was briefed on the matter but spoke on condition of anonymity because he wasn’t authorized to discuss it publicly. The medical examiner’s office in Manhattan confirmed Epstein’s death. (AP Photo/Richard Drew)

The two correctional officers assigned to watch the special unit in the jail where financier and sex offender Jeffrey Epstein was being housed when he apparently hanged himself Saturday were working overtime - one forced to do so by management, the other for his fourth or fifth consecutive day, the president of the local union for jail staffers said Sunday.

Serene Gregg, president of the American Federation of Government Employees Local 3148, said the Metropolitan Correctional Center in Manhattan is functioning with less than 70 percent of the needed correctional officers, forcing many to work mandatory overtime and 60- or 70-hour workweeks.

She said one of the individuals assigned to watch Epstein's unit did not normally work as a correctional officer but, like others in roles such as counselors and teachers, was able to do so, she said. She declined to say which one or specify the person's regular role.

"If it wasn't Mr. Epstein, it would have been somebody else, because of the conditions at that institution," Gregg said. "It wasn't a matter of how it happened or it happening, but it was only a matter of time for it to happen. It was inevitable. Our staff is severely overworked."

Gregg's comments are sure to increase scrutiny of the Bureau of Prisons and the Metropolitan Correction Center, the high-rise jail in Manhattan where Epstein, 66, was found hanging in his cell Saturday while he was awaiting trial on federal allegations that he sexually abused dozens of young girls in the early 2000s. He was taken to the hospital after being found and was pronounced dead.

The death, which authorities had classified initially as an "apparent suicide," triggered multiple investigations into how such a high-profile inmate, who had previously been placed on suicide watch, could have died in federal custody. It also sparked outrage among his victims and their representatives, who had hoped that Epstein's trial next year would finally produce the justice they felt Epstein had long evaded.

Gregg said she did not know details of the investigation into Epstein's death and declined to detail her discussions with those working that night. But she said she has long complained about understaffing at the facility, telling superiors, "It's only a matter of time before we have a loss of life." And in Epstein's case, she said, it was possible overwork of officers played a role.

"It's daunting, mentally, physically. I would feel confident in saying that some of that contributed to the unfortunate death of inmate Epstein," she said, clarifying later that she did not know with certainty whether workload played a role in the incident because she was not privy to details of the investigation.

A spokesman for the Bureau of Prisons did not respond to a request for comment on Gregg's assertions.

On Sunday, amid inquiries by the FBI, Justice Department inspector general and New York City medical examiner, there remained more questions than answers.

"It's our practice not to comment on ongoing investigations," said John Lavinsky, a spokesman for the Justice Department inspector general.

Epstein was not on suicide watch Saturday before he was found, but he was held in the jail's special housing unit - which, according to union officials, meant he should have been checked on every 30 minutes. It was unclear whether that procedure was followed, and exactly when personnel last checked on Epstein. Gregg declined to comment on internal security procedures.

It was also not clear how much, if any, of the hanging or authorities' check-ins was captured on camera. E.O. Young, the national president of the Council of Prison Locals C-33, said that while cameras are prevalent in the facility, he did not believe they generally captured inmates' cells.

The Bureau of Prisons said Saturday that lifesaving measures were "initiated immediately" after Epstein was found, and then emergency responders were summoned. A spokesman did not respond to questions about the case Sunday. A Justice Department spokeswoman declined to comment, citing the ongoing investigations.

Epstein had been placed on suicide watch after a July 23 incident in which he was found in his cell with marks on his neck - which subjected him to near constant monitoring and daily psychological evaluations, according to people familiar with the case. But he was taken off that about a week later and brought to the special housing unit, which subjected him to higher level of security, but not constant monitoring.

Before the incident, Epstein had a cellmate: Nicholas Tartaglione, a former police officer in custody on murder and narcotics charges. But Young, the national union president, said Epstein was in a cell alone immediately before his death.

Young said he was not certain why Epstein was in the cell alone, as the Bureau of Prisons has moved recently to make sure fewer inmates are housed on their own. He said there was some speculation after the July 23 incident that Epstein was trying to get away from Tartaglione, whom he feared, and he believed that - at least for a time - Epstein had another cellmate after coming off suicide watch.

Young asserted that in the jail's general population, Epstein also would likely have been a target, and that there was only so much officers could do to prevent him from harming himself.

But Young said, even in Epstein's case, correctional officers face a grim reality.

"We can't ever stop anyone who is persistent on killing themselves," Young said. "The only thing the bureau can do is delay that."

Young said he and other officials had long been raising concerns as the Trump administration had imposed a hiring freeze and budget cuts on the Bureau of Prisons.

"All this was caused by the administration," Young said.

Spokesmen for the White House did not immediately respond to a request for comment. In congressional testimony earlier this year, Attorney General William Barr conceded that the bureau was "short" about 4,000 or 5,000 employees and said he had lifted the hiring freeze and was trying to ensure a steady pipeline of new officers to replace those who leave.

"I think this is an area where we have stumbled," Barr said.

Though Epstein's death will short-circuit his trial, the U.S. Attorney in Manhattan said Saturday that authorities were continuing to explore those who might have conspired with Epstein. The financier had a star-studded list of acquaintances and friends - including former president Bill Clinton and President Donald Trump - though investigators' focus in the past has been on the less high-profile people who worked with Epstein and were accused of helping procure girls for him.

Epstein had pleaded guilty in 2008 to two state charges to resolve similar sexual abuse allegations as part of an agreement that has been widely criticized as overly lenient. The deal allowed Epstein to spend just 13 months in jail and be released regularly for work, and it spared those who worked with him from prosecution.

It was approved by Alex Acosta, who was then the U.S. Attorney in Miami. Acosta would go on to serve as labor secretary in the Trump administration but resigned from his post last month after federal prosecutors in New York charged Epstein, renewing questions about the earlier deal.