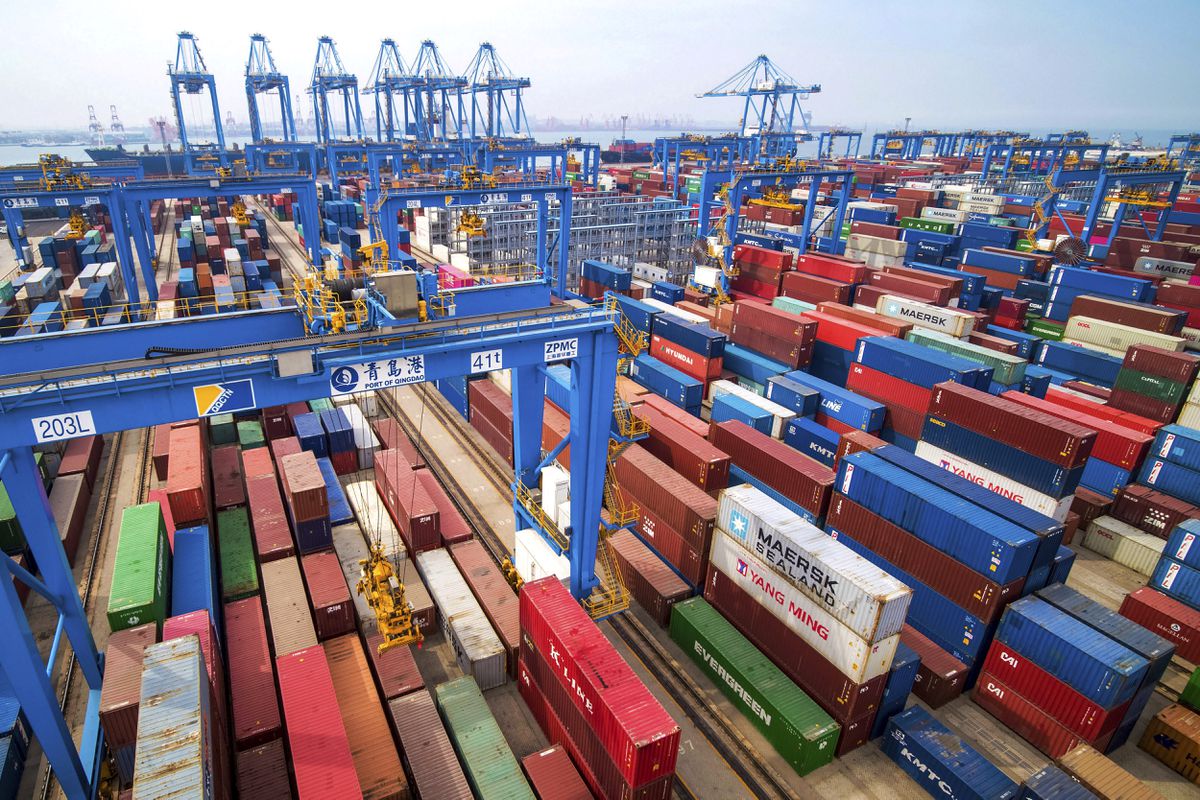 In this Tuesday, May 14, 2019, photo, containers are piled up at a port in Qingdao in east China's Shandong province. (Chinatopix via AP)

In this Tuesday, May 14, 2019, photo, containers are piled up at a port in Qingdao in east China's Shandong province. (Chinatopix via AP)

WASHINGTON - The White House on Tuesday said it would delay imposing tariffs on Chinese imports of cellphones, laptop computers, video game consoles, and certain types of footwear and clothing until Dec. 15, significantly later than the Sept. 1 deadline President Donald Trump had repeatedly threatened.

The announcement, which came from the Office of the U.S. Trade Representative, ensures that Apple products and other major consumer goods would be shielded from the import tax until at least December, potentially keeping costs on these products down during the holiday shopping season.

It was the latest in a series of Trump's unexpected announcements and reversals as the White House attempts to pressure China to change long-standing economic practices. The confusion and uncertainty has weighed on the economy, leading companies to tighten up investment as they wait for a resolution.

White House officials have been split over how to proceed with China. Some, including Treasury Secretary Steven Mnuchin and National Economic Council Director Larry Kudlow, have expressed optimism that a deal could be reached. But Trump and senior trade adviser Peter Navarro have defended the tough tactics, saying they are necessary to change China's behavior.

Tuesday's announcement reflected a more cautious approach, and it moved stocks sharply higher. The Dow Jones industrial average jumped after the news and finished the day 373 points, or more than 1.4 percent, higher. The stock prices of Apple, Best Buy, Mattel and Macy's were among those that rallied on the announcement.

The announcement effectively shields more than $100 billion in Chinese imports from tariffs until December 15.

Trump has for weeks insisted that higher tariffs are somehow paid for by the Chinese government, even though tariffs are imposed as a form of customs duty that is paid for by U.S. importers.

"What we've done is we've delayed it so they won't be relevant in the Christmas shopping season," Trump said before boarding a flight to western Pennsylvania. "Just in case they might have an impact on people."

The economy has shown signs of slowing this year, and some business executives, lawmakers and White House officials had worried that the tariffs were damaging the economy even further. A number of businesses had cut back on investing, in part because they were unsure how Trump planned to proceed with the trade war. Democrats had begun attacking Trump for lacking a coherent plan in his approach to dealing with the Chinese, and the rapid reversals had caused dramatic swings in the stock market.

Sensing that Trump's new defiance toward China could drive up costs, a number of companies petitioned the White House to exempt items they import from the new tariffs. They argued that these costs would be either passed along to the consumer or threaten the solvency of individual firms.

USTR said the 10 percent tariff would still go into effect in September on some items, including many food products, gloves, coats and suits. But it said tariffs on other items would be waived completely, "based on health, safety, national security and other factors."

In a nod to pressure from religious groups and publishers, the White House completely exempted Bibles and certain other books from new tariffs.

Trump, in a Twitter post and comments to reporters, suggested that the announcement was meant as an overture to Chinese officials and an attempt to restart the stalled negotiations.

"I'm not sure if it was the tariffs or the call, but the call was very productive," Trump said, referring to a conversation this week between top Chinese and U.S. negotiators.

But he added a warning on Twitter that China needs to buy more from the United States, "As usual, China said they were going to be buying 'big' from our great American Farmers. So far they have not done what they said. Maybe this will be different!"

USTR provided a list of products that were exempted and would face the delayed tariff implementation date, which included highchairs, strollers, cellphones and many toys.

Many businesses had worried that higher tariffs on consumer goods ahead of the Christmas shopping season could severely damage the economy at a time when some are warning that the risk of a recession next year has increased.

The tariff delay is likely to keep retail shopping strong this year, many economists say, but it does nothing to alleviate the confusion and uncertainty over what Trump will do next in the trade battle.

"Recession risks are elevated," said Michelle Meyer, head of U.S. economics at Bank of America. "Uncertainty remains very high. Until there is a clear resolution, which we do not think will come before the end of next year, businesses will remain cautious in regards to investment."

Meyer now predicts a 1-in-3 chance of a recession in the coming year as businesses have already pulled back on spending and are showing early signs of slowing down hiring as well.

The White House list of items that would face immediate tariffs and delayed tariffs included many items that appeared very similar, and White House officials did not explain how they decided which items to exclude and which ones to penalize.

Similarly, recreation performance outerwear "bibs and overalls" are exempted from tariffs until Dec. 15. But nearly four dozen other types of overalls would face tariffs in September.

The announcement is the latest in a herky-jerky trade war between the White House and China. Trump has levied tariffs on $250 billion in Chinese imports, beginning last year, as he has tried to pressure Chinese leaders to change their trade practices. Chinese officials have negotiated but refused to agree to the terms Trump has demanded, leading to a prolonged standoff.

Trump has frequently threatened dramatic penalties, however, only to back away. His threat of imposing a 10 percent tariff on an additional $300 billion in Chinese imports starting next month spooked investors and many lawmakers, and it has led to a steady slide in the stock market in the past two weeks.

"These tariffs were Trump's idea. Now his team is trying to clean this up," said Steve Pavlick, a former Treasury Department official under Trump who is now head of policy at Renaissance Macro Research. "I don't think it's a coincidence that you see this right before Christmas. They are trying to minimize the impact."

Trump has pressed China for months to change its trade practices, calling on it to change the way it subsidizes domestic companies, among other things. The White House has also accused China of stealing intellectual property from U.S. companies and forcing U.S. firms to transfer technology to Chinese firms.

But Trump's demands in recent weeks have shifted, a sign of the political peril that the prolonged trade war has raised.

Trump had originally threatened to impose the new tariffs on $300 billion in consumer goods by early July, but at a June meeting with Chinese President Xi Jinping, Trump agreed to hold off. At the meeting, during the Group of 20 summit in Osaka, Japan, Trump said the Chinese had agreed to dramatically increase purchases of U.S. agricultural goods, a nod to the farm industry, which had become increasingly incensed about being caught in the middle of the trade war.

But Chinese officials say they never agreed to purchase the farm products Trump had promised, and that soon became clear to the U.S. agriculture industry.

Several weeks ago, the U.S. trade representative, Robert Lighthizer, and Mnuchin flew to Shanghai to meet with Chinese leaders about restarting negotiations. The discussions went poorly, people briefed on the outcome said.

Trump had recently said that the Chinese seemed intent on waiting until after the 2020 election before they would cut a deal with him, and he seemed content with that. But when he heard back from Mnuchin and Lighthizer about how poorly the trip had gone, he announced that he would move ahead with the 10 percent tariff in September.

USTR’s announcement on Tuesday that it would delay the imposition of those tariffs on some of the most popular consumer goods was the first sign that Trump was backing down from that demand.