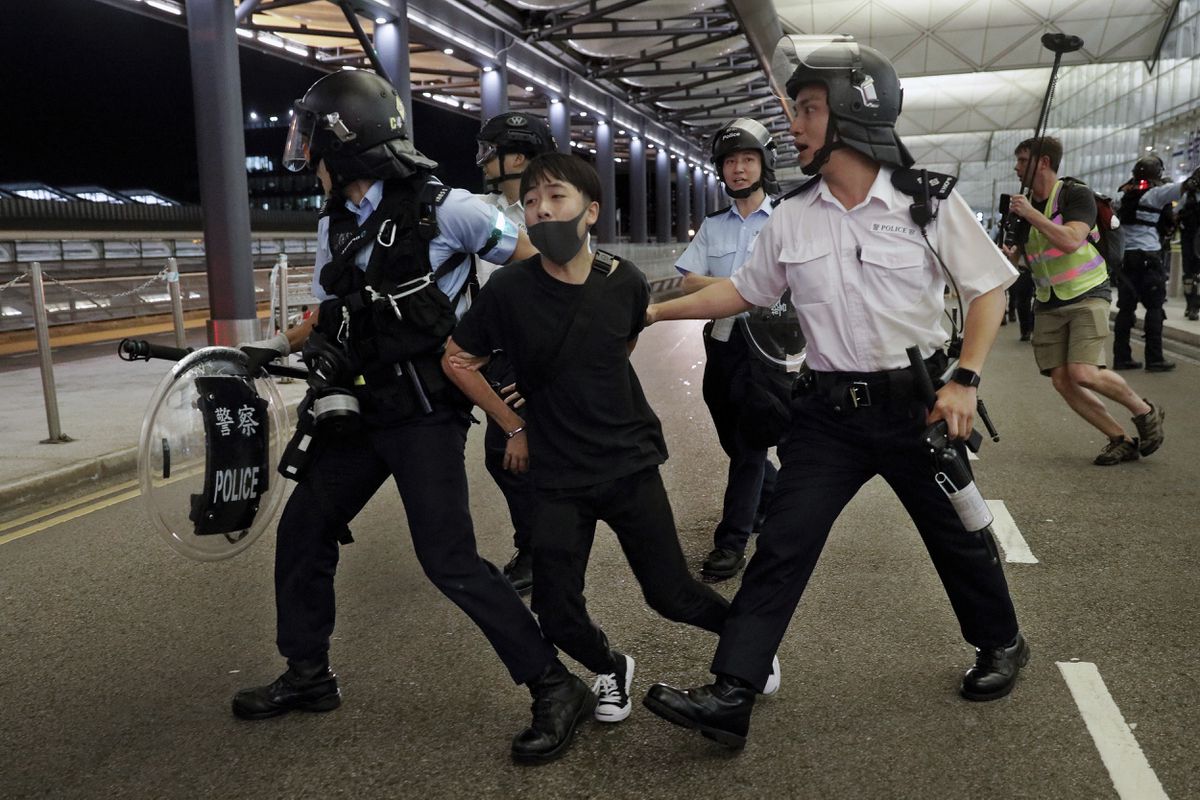 HONG KONG - Riot police armed with pepper spray and batons clashed with protesters late Tuesday at Hong Kong’s airport, bringing violence to the key international hub while passengers were stranded inside after many departing flights were canceled.

The police intervened after a frenzied mob of protesters seized a man, claiming he was an undercover Chinese police officer, and blocked paramedics from transporting him for hours after he lost consciousness. Later Tuesday night, the group seized a second Chinese man, identified by his documents and his editor as a reporter for the Global Times, the Chinese Communist Party-run newspaper.

Arrivals and departures returned to normal Wednesday morning Hong Kong time. Also Wednesday, Hong Kong's airport authority said it had obtained a court order to prevent people from obstructing the terminal or participating in any protest at the airport other than in a designated area.

On Tuesday afternoon, President Trump weighed in, tweeting: "Our Intelligence has informed us that the Chinese Government is moving troops to the Border with Hong Kong. Everyone should be calm and safe!" He did not elaborate, and it is not clear whether he based the tweet on new information or on widely circulated reports Monday about Chinese armored personnel carriers massing on the Hong Kong-China border.

The incidents marked a brazen escalation by protesters in confronting those they perceive as infiltrators from mainland China and capped a second consecutive day of chaos at Hong Kong International Airport, normally among the busiest in the world. Authorities have not been able to quell months of protests in the city, a global financial hub.

After mass cancellations Monday evening, flights had been gradually returning to normal throughout Tuesday, even as thousands of black-clad demonstrators returned to occupy parts of the airport, carrying placards denouncing police brutality and calling for freedom for Hong Kong.

But by late afternoon, with protesters using luggage carts as makeshift barricades and blocking passengers from reaching the departure gates, causing long lines, authorities said they were suspending check-in at both of the airport's terminals.

Arguments erupted between frustrated passengers and protesters, with some stranded passengers crying and saying they just wanted to get home.

A more disturbing scene began taking shape later in the day when a group of protesters surrounded a man they believed to be an undercover police officer from Shenzhen, the Chinese city across the border from Hong Kong. There was no confirmation of the man's identity or employment, but the protesters tied his hands and did not let him move or leave for hours.

Those closest to the melee held their phones aloft and tried to film the struggling man, while some jeered and laughed at him. Protesters held a handmade sign over the man that read in English, "I am China's police. I pretend to be protester," as he appeared to struggle to remain conscious.

Police entered the airport to help the man, whom paramedics tried to remove on a stretcher. The presence of officers sparked chaos, with protesters spilling out of the airport building and attacking vans carrying police officers.

At one point, an officer was overwhelmed and his baton taken by protesters, who beat him with it. The group retreated only after the officer appeared to pull his pistol from its holster.

After the standoff with police, a second man was apprehended by protesters and bound to a luggage cart with cable ties. Protesters took away his passport, bank cards and other personal documents and scattered them on the floor. The documents identified him as a reporter at the Global Times, a nationalist tabloid.

Hu Xijin, the newspaper's editor in chief, confirmed on Twitter that the second man seized by protesters was a reporter for the Chinese state outlet.

"Fu Guohao, reporter of GT website, is being seized by demonstrators at HK airport," Hu said. "I affirm this man being tied in this video is the reporter himself," Hu said. "He has no other task except for reporting. I sincerely ask the demonstrators to release him. I also ask for help of West reporters."

Trump on Tuesday described the developments in Hong Kong as a "very tough situation."

The State Department urged China to adhere to its commitment to allow "a high degree of autonomy" in Hong Kong - part of an agreement under which Britain relinquished its former colony. "We condemn violence and urge all sides to exercise restraint, but remain staunch in our support for freedom of expression and freedom of peaceful assembly in Hong Kong," the State Department said, adding that the protests reflect "broad concerns about the erosion of Hong Kong's autonomy."

The demonstration at the airport started as a peaceful protest against police use of force in response to recent protests. Chants of "Return the eye!" broke out - a reference to an incident Sunday night when a young woman was shot in the eye, possibly with a bean bag round, during a clash between police and protesters. Senior officers said Tuesday they were unsure how the woman was injured.

Time and again, protesters scolded their peers when tempers flared. Chants of "Lang jing!" - Calm down! - rang through the departure hall when arguments threatened to boil over.

Roving teams of protesters handed snacks to stranded passengers and appealed for understanding as they distributed pamphlets detailing their case against police brutality. Others bowed repeatedly and said "sorry" without yielding their ground in the face of angry passengers.

"Sorry for inconvenience. We have no choice," said a sign held in front of a barricade blocking departures.

Police said they were closely monitoring the situation at the airport, working with airport authorities, and would carefully consider the need to use force.

Pavol Cacara, a Slovakian machinery importer who faced off with protesters, said his flight to Istanbul was canceled once already.

"You cannot make freedom by taking freedom from others!" he bellowed, shaking with rage, at a mass of young demonstrators in black T-shirts. "This is what the Chinese want you to do, to make you lose support of the world. You are helping them!"

Some passengers were sympathetic. Krishna Hariharan, a 27-year-old IT engineer from Chennai, India, said his five-day holiday in Hong Kong was already extended to seven days because of canceled flights, angering his boss. He said he had to sleep in the terminal because he was running out of money.

But he praised protesters who had come over to apologize and give him bottled water and biscuits.

"I can't blame anyone," Hariharan said. "They are seeking justice, and it just happens that our fates are intertwined like this. If the government comes down hard on them - then what are they governing for?"

But the apprehension of two Chinese men later that night raised the stakes amid an already delicate situation between Hong Kong and Beijing, which has sovereignty over the city.

Statements from Chinese government officials and state media had grown steadily more shrill before Tuesday, accusing protesters of "terrorism" and warning of an impending crackdown in the semiautonomous financial center.

The political crisis, triggered by now-suspended plans to allow extraditions to mainland China, has grown as residents of Hong Kong demand the extradition bill's full withdrawal, an independent inquiry into police actions toward protesters, greater democracy and an amnesty for those arrested in clashes between demonstrators and police.

The upheaval has come at a politically sensitive time for Chinese leader Xi Jinping, ahead of the 70th anniversary of the founding of the People's Republic of China, which the rulingCommunist Party plans to mark with a military parade in October.

Carrie Lam, Hong Kong's leader, said the city was in danger of being "pushed into an abyss" and warned that it could be "smashed to pieces."

"The stability and well-being of 7 million people are in jeopardy," Lam said.

The Hong Kong-based airline Cathay Pacific, which has drawn the ire of Beijing after some of its staff recently joined protests, said Tuesday that a second pilot from the airline has been suspended. The pilot, a second officer on a flight Tuesday from Manchester to Hong Kong, was suspended for "misuse of company information in violation of the company's internal code of conduct," Cathay Pacific said in a statement. It added that internal disciplinary proceedings were underway.

On Saturday, Hong Kong's flagship airline said it had suspended a pilot who was arrested during earlier protests.

International calls grew, meanwhile, for authorities in Hong Kong and China to dial back tensions in the city.

U.N. human rights chief Michelle Bachelet urged authorities to immediately investigate police use of force in the recent crackdown on protests. Her spokesman said there was "credible evidence" to suggest that Hong Kong law enforcement officials had used less-than-lethal force in ways that are "prohibited by international norms and standards."

Chris Patten, the last British governor of colonial Hong Kong before the city's return to Chinese sovereignty in 1997, warned that a Chinese intervention would be a "catastrophe" for both Hong Kong and China.

Speaking to BBC radio, he urged Lam and Xi to find a way to bring people together.

"There is a degree of frustration and anger at the government refusing to give any sensible ground at all," Patten said, "which probably provokes more violence."

The Washington Post’s Anna Kam in Hong Kong and Shibani Mahtani in Cadiz City, Philippines, contributed to this report.