Cannabis restaurants are coming to California, with ‘budtenders’ and ‘flower’ service 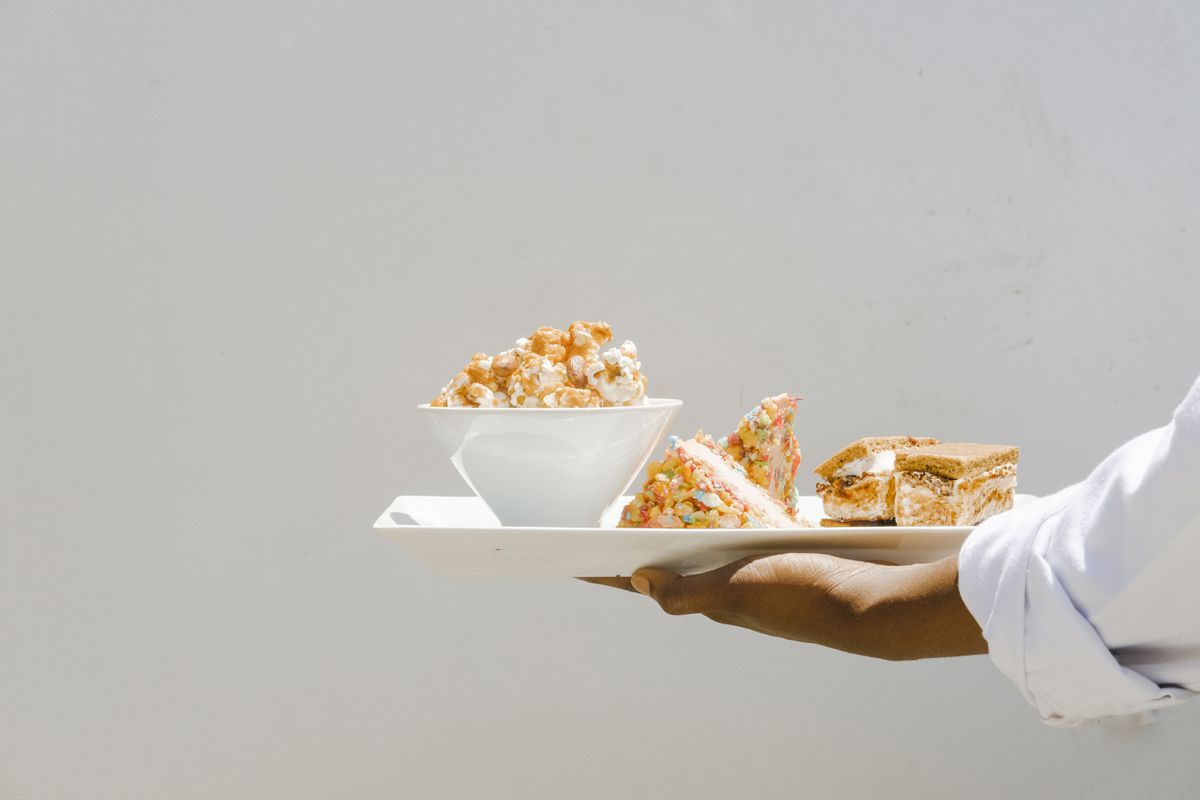 WEST HOLLYWOOD - Like any good chef about to open a restaurant, Andrea Drummer wants to get her pairings just right. But her lamb chops with plantain-mango salsa won’t be matched with wine or beer.

Instead, a "budtender" - some in the industry call them ganjiers, as in ganja sommeliers - will help guests at the soon-to-open Lowell Farms cannabis cafe pair their farm-to-table meal with the perfect strain of farm-to-table marijuana.

"A kush is a little more pungent, so it pairs better with a stew, or something like a beef or a meat product. A lighter lemon profile goes nicely with a fish," said Drummer. One of her favorite strains, Blue Dream, "pairs well with both savory and sweet. I've done it with ice cream, and with bread puddings, but I've also done it with octopus."

When the rustic, plant-filled 220-seat space opens, it will be the first of its kind in America: a place for locals and tourists to have a high-quality meal and smoke a joint in public. Other restaurants are soon to follow. But if they want weed on the menu, restaurateurs in the famously progressive city - which in 2017 approved an ordinance allowing business licenses for this purpose - will still have to navigate a complicated patchwork of regulations.

"With cannabis, we are building the boat as we're on the water," said Jackie Subeck, who plans to open a cannabis spa, clinic and cafe and serves as the chairwoman of the cannabis legislative subcommittee for the West Hollywood Chamber of Commerce.

States that have legalized recreational cannabis will be watching how the city pulls it off. Colorado Gov. Jared Polis, a Democrat, signed a bill in May allowing cannabis lounges. If legalization continues apace, cannabis restaurants might eventually become as normal as wine bars.

"Whatever West Hollywood does now," said Sean Black, co-founder of Lowell Herb Co., the cannabis company opening the cafe, "the rest of the blue states, at least, [do] three years later."

Proposition 64 legalized cannabis in California, but consuming it in public is still prohibited. When the West Hollywood City Council held a study session on the topic in 2017, it determined that access to places to smoke was a social-equity issue.

However, that wasn't the only reason the council approved an ordinance allowing public consumption lounges.

People "enjoy the nightlife of West Hollywood. So we thought this was kind of a natural evolution that, you know, you can stay in West Hollywood in a hotel, you can go out to our bars and our restaurants, and now you can go to a cannabis consumption cafe as well," said Leonard.

There are public cannabis consumption areas elsewhere in California and in Colorado, but many are lounges attached to dispensaries or vape clubs reminiscent of a dingy basement. They are pretty different from what West Hollywood had in mind when it opened up applications for 16 on-site consumption licenses (with 24 additional licenses for dispensaries and delivery) in May 2018.

The process drew more than 300 applicants, who were scored on factors such as innovation and social equity. The top eight in each of five categories were allowed to proceed.

Drummer's application, among the highest scorers in the category for consumption lounge (smoking, vaping and edible), outlined a "bright and airy oasis" with tableside "flower" service - cannabis buds hand-rolled into joints. It also called for a menu of infused food, which Drummer has been making for years as a private chef whose clients have included comedian Chelsea Handler. The business has several partners, but its main support comes from Lowell Herb Co., with its rustic branding and celebrity following.

But as soon as the licenses were approved, the compromises began.

The first problem was the discrepancy between city and state licensing. Although the city allows licenses for consumption lounges that aren't attached to dispensaries, "There is no such thing as a cannabis cafe license from the state," which will license the businesses as dispensaries, Black said.

The next problem was the food. Although West Hollywood permits it, California prohibits cannabis businesses from selling anything other than cannabis, with the exception of accessories such as bongs and pipes, and branded merchandise such as T-shirts. The purpose "was to make sure that dispensaries did not become convenience stores and start selling Reese's peanut butter cups and Doritos and Coke," Subeck said.

But folks in the cannabis industry are finding loopholes, which West Hollywood has encouraged. Lowell's strategy is to put two separate businesses under the same roof: a lounge to smoke cannabis and a restaurant. Guests who order food and cannabis will receive separate bills. The plan was approved by the West Hollywood Business License Commission in July.

Another compromise: Drummer originally had planned to serve freshly infused food, with cannabis butters and oils incorporated at various doses. But that will have to wait, because under state law, all cannabis products have to be prepackaged and tested, making it logistically impossible for a restaurant kitchen that wants to serve fresh food. She's now focusing on making uninfused food to pair with cannabis - including a dessert "flight" that features a Fruity Pebbles ice cream sandwich, and a s'more with a housemade marshmallow.

It's trickier for restaurants that planned to infuse food but applied for an edible consumption license. They cannot fall back on making money from joints and vaping, like Lowell, but they, too, have found a creative solution. The team behind the Antidote, which plans to open an upscale cannabis restaurant in the spring, also plans to open a commissary kitchen to produce sauces and dressings infused with THC, the psychoactive compound in cannabis. Guests would purchase a sauce, which would be presented alongside the meal in a sealed container, open it themselves and dose appropriately. (The sauce also would have to be purchased from a separate business - which, as at the Lowell cafe, could be under the same roof as the restaurant.)

"Think of, like, butters and oils and broths," said Kirk Cartozian, a Los Angeles-area restaurateur and partner in the Antidote, which might spin off into a separate business. "We have a lab and essentially the potential setup to supply our own, and maybe supply others, with business-to-business" infused ingredients.

Running a cannabis restaurant is nothing like running a typical restaurant in West Hollywood. Cannabis businesses cannot serve alcohol, so drinks are zero-proof. The state does not permit cannabis businesses to operate after 10 p.m., so Lowell Farms cannabis cafe must have last call for cannabis before then - though it can remain open until 2 a.m. (Leonard said West Hollywood hopes to be granted an exemption.) The businesses cannot be within 600 feet of a day care or a school. Some neighbors, including a synagogue across the street from the Lowell cafe, aren't too happy about sharing a block with a cannabis business.

Because the federal government still considers cannabis a Schedule 1 drug, most banks are unwilling to serve cannabis businesses, which must rely on alternative banks and credit unions or cash transactions. (The California Senate approved legislation in May that creates a pathway for more banks to work with cannabis companies.) When the city collected more than $1 million in license application money, it was primarily in cash.

Leonard said he anticipates that many businesses will pay their taxes in cash, too, which "creates risks for everybody," he said. "We have to have multiple people in the room counting cash. We have to have sheriff's deputies there with the cash being counted. We have to have armored cars coming in, picking it up."

Tables probably won't turn as quickly at cannabis restaurants because guests who are high may be more likely to linger. Lowell's plans for a roof deck were scuttled because cannabis consumption cannot be seen from the street, so smokers must partake in a walled-in garden at street level. And guests who don't finish their cannabis won't be able to take it home.

"They're going to purchase less," said Subeck. "How is a business supposed to survive if they can't sell products?"

It might encourage some people to take a larger dose in the interest of getting their money's worth. The restaurant also has to ensure guests don't over-consume, and that's trickier than a budtender cutting someone off. Cannabis - especially when ingested - affects everyone differently, depending on body mass and tolerance level, so a dose that barely registers for one guest could send another sky-high.

Cannabis cafes are not yet the moneymaker they seem to be. The added expenses - extra staff and 24-hour security, pricey vents to suck up the smoke, lobbying and preparing the license proposal - mean the Lowell cafe will cost approximately $3 million to open.

"The chance of this being a real moneymaking operation is that it is truly the first of its kind and it becomes a tradition throughout America, and 30 years from now, it's a historical landmark and the first place in America cannabis was served," said Black.

City officials hope the gamble eventually pays off. West Hollywood is ready for marijuana tourists and hopes the new businesses - which include a virtual-reality space and an art gallery with a cannabis lounge - attract them in droves. There are already cannabis tour buses, and the city's dispensaries do brisk business. The Standard Hotel has plans to open a high-end shop in its lobby by cannabis company Lord Jones. And in August, the company WeedMaps opened a 30,000-square-foot Museum of Cannabis in Hollywood, with exhibits both educational (the science of terpenes) and Instagrammable (a room that looks like a psychedelic lava lamp).

Leonard estimates that once most of the new businesses are up and running, annual cannabis tax revenue will be between $5 million and $6 million.

"Amsterdam kind of went to step one," with its simple cannabis coffee shops, said Rachel Burkons, who co-owns Altered Plates, a culinary collective and cannabis hospitality company. "I think these are going to be much more robust in terms of their overall concept and execution and are going to really kind of blow that out of the water."

The first time Drummer smoked marijuana, as a 13-year-old in south Florida, she got into a fight that sent her to court. After reading the anti-drug book “Go Ask Alice,” she became a youth counselor who encouraged students to stay away from marijuana. But after a few years, her thinking changed.

"I just thought, I can't do this," she said, "because I don't know if this is wrong anymore."

She abandoned social work, went to Le Cordon Bleu culinary school and later started using cannabis to treat sciatica, caused by long days standing in the kitchen. She founded Elevation VIP, a private cannabis dinner company, and briefly lived in her car while she was getting the business off the ground. It paid off after appearances on the former late night talk show "Chelsea Lately" and the Netflix show "Cooking on High." Drummer said her dream was always to open a cannabis restaurant.

"I've always looked forward to the day that what we do is counted among the critics and among the James Beard [Awards]," Drummer said.

In a way, the new restaurant will allow her to use her social worker skills again. Lowell Farms cannabis cafe aims to hire staff who were previously incarcerated for nonviolent cannabis offenses. Drummer sees it as a way of bolstering African Americans, who have been the most disproportionately penalized for cannabis use but who represent only a small part of the industry.

As she tested recipes on a recent Monday morning, amid the din of construction, Drummer realized another way the restaurant would be breaking ground: It could potentially forge new territory for food critics, who might need to take a few hits to see how well her pairings work.

Cannabis can make food taste really, really good. So if a critic were to partake, she said with a laugh, “We’ll get all the stars.”