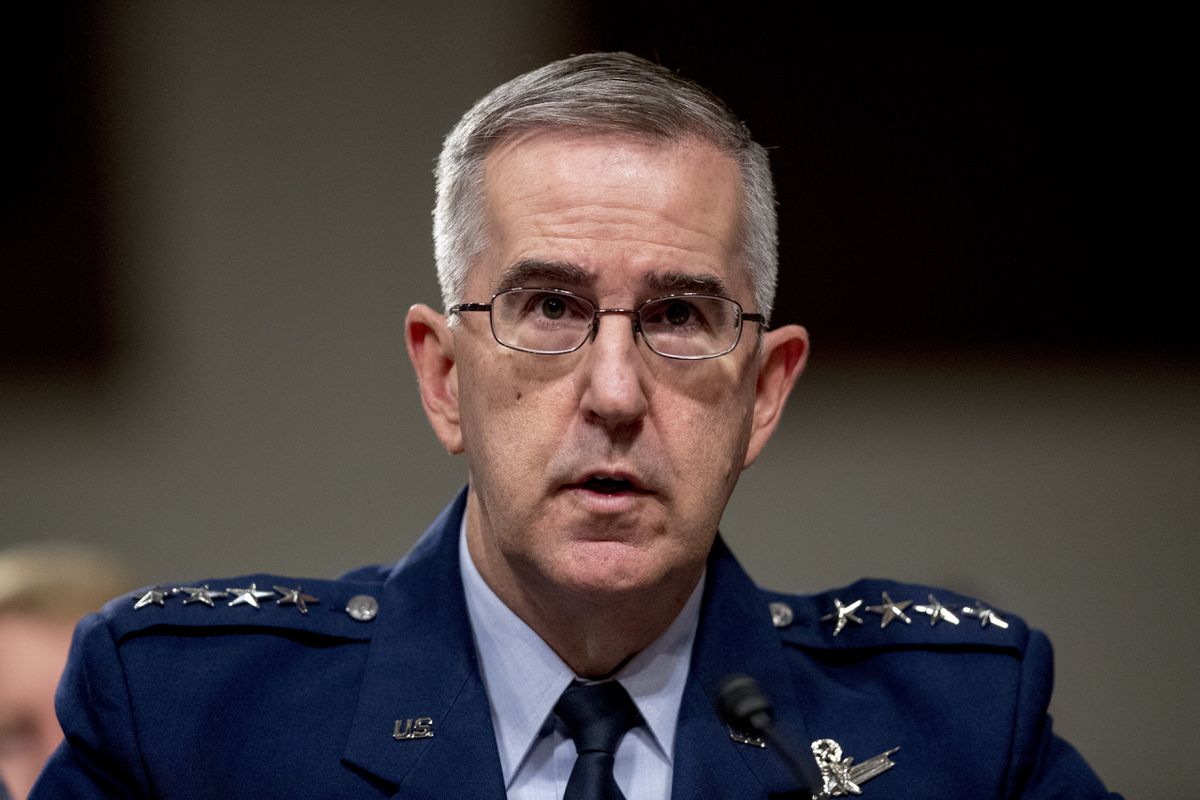 WASHINGTON - Newly obtained documents from a military investigation into sexual assault allegations against President Donald Trump’s pick to be No. 2 officer at the Pentagon provide new insight into how a Senate committee decided to recommended the nominee for confirmation, as lawmakers prepare for a final vote early next month.

Democratic and Republican members of the Senate Armed Services Committee have said little publicly about their closed-door sessions with Air Force Gen. John Hyten, who was accused by an Army colonel of making unwanted sexual contact with her on several occasions in 2017.

The panel voted 20 to 7 last month to recommend Hyten be confirmed as vice chairman of the Joint Chiefs of Staff, with several lawmakers stating that he had been wrongly accused.

But hundreds of pages of documents obtained by The Washington Post, including a 59-page summary of the Air Force Office of Special Investigation's examination of the allegations, shed light on what may have convinced the panel's members.

The materials, which also include a 367-page Army inspector general report about Hyten's accuser, Army Col. Kathryn Spletstoser, suggest that while serious questions about her credibility were raised by her former co-workers and other military officials, investigators did not reach a conclusion on whether Hyten had assaulted her - leaving it to lawmakers to make a judgment call.

Hyten, now in charge of the nation's nuclear arsenal at U.S. Strategic Command, has denied the allegations. But he also faced some tough questions about them.

In one issue raised in findings due to be released by the Air Force soon, a civilian witness told investigators that Hyten paid for and took a polygraph, and that the inconclusive results "frustrated" him. Hyten declined to address questions about the polygraph in a second interview with investigators, according to the Air Force report.

For many senators, assessing Spletstoser's credibility came down to two key factors: an internal military assessment that she had created a "toxic work environment," which prompted her dismissal from Hyten's command, and questions about her mental state at the time of the firing.

Elements of both are detailed in the Air Force investigation's summary and the previously undisclosed Army inspector general investigation of whistleblower claims Spletstoser raised against Hyten's chief of staff after she was dismissed.

Both reports detail claims by Spletstoser's colleagues that she was sharp-tongued, foul-mouthed and often combative, though reviews were mixed as to whether her style was "toxic." Their interviews also suggest that Hyten was either unaware of Spletstoser's behavior, or condoned it.

Hyten gave Spletstoser a glowing job performance review in mid-November 2017, just as his command was launching an initial workplace climate assessment that prompted the probe of Spletstoser in late December, and her eventual dismissal. Hyten's defenders have accused Spletstoser of fabricating the sexual assault charges in an effort to exact revenge for her termination.

But Spletstoser alleges that the focus on her "toxic leadership" was an attempt to get rid of her after the most egregious of the alleged sexual assaults, in which she said Hyten ejaculated after pinning her against him in her hotel room at the Reagan National Defense Forum in early December 2017.

Senators challenged Hyten during his public hearing last month to explain why he had supported Spletstoser when her conduct was so objectionable to others in his command. He testified that he was slow to realize Spletstoser was a toxic leader, but that once he did, "I moved quickly in order to deal with that."

The Air Force's report indicates that Hyten recommended her for employment to other senior leaders, including the Army's top two officers, Gens. Mark Milley and James McConville. Emails that Splestoser provided to The Post suggest that Hyten continued to advocate on her behalf into January 2018, even as the Army was determining that her conduct was worthy of investigation.

On Jan. 21, after an investigation of Spletstoser's actions at Stratcom was launched, Hyten wrote to Lt. Gen. John Murray to "sing her praises" and offer flexibility on when she could report to her next job if it would help in selecting her to be his executive officer.

"Just a few things about her," Hyten wrote in an email. "She is brilliant, tough and detail-oriented." He added, "For complete transparency, she has one quality that rubs some people the wrong way - she can be demanding - but I like that."

The authenticity of the emails could not be verified, but their content appears to match descriptions in the Air Force report.

Murray, since promoted to be the four-star general in charge of Army Futures Command, recalled to Air Force investigators that he interviewed Spletstoser but chose a more qualified candidate. Spletstoser, Murray said, "did not have a good reputation in the Army" and had been described to him as abrasive.

Spletstoser defended her style in an interview.

"Can you argue that, 'Hey you were mean to people.'? Yeah, I've apologized to every one of them, and I own that," she said. "If you were being sexually assaulted behind closed doors and you were being pressured and manipulated by a four-star who held everything you hold dear in the palm of his hand, and he could destroy you, maybe you wouldn't be so nice either."

Yet some say it was Spletstoser who was manipulating the system. Before accusing Hyten of sexual assault, she told Army investigators that "the golden ticket to get somebody fired" in the military is to say "they're toxic, they're a bully, or they did something like sexual harassment or sexual assault," according to the inspector general's report. "Those are the four ways to get people fired automatically. It just is."

Spletstoser told The Post that those comments did not refer to Hyten "nor is it in any way something I would do to get someone fired."

Retired Army Maj. Gen. Heidi Brown, who overlapped at Stratcom with Spletstoser and Hyten, said Stratcom staff members have rallied around Hyten because of their experiences with both officers.

The Army inspector general notes that hours after Spletstoser was dismissed from her job working for Hyten on Feb. 26, 2018, she sent messages that staff members feared suggested she might commit suicide.

In one email, Spletstoser wrote to Hyten and his senior enlisted adviser, Air Force Chief Master Sgt. Patrick McMahon, that she "could not live with this situation" in which she was "wrongly accused of being a toxic leader."

"My lawyer will continue to clear my name not that I will be around to care," she said in the message. "Well the only one who gets to judge me now is God. By the time you read this the only thing worth doing is to pray for me as I have for you."

She sent a message with similar themes the same day to her lawyer, noting that she did not "plan on being around any longer" and that it "makes me a coward." The lawyer, whose name is redacted from investigative documents, alerted Stratcom officials, who notified police in Omaha, where she lived.

Spletstoser also called Hyten, who was giving a speech at Yale University that day but had instructed his security detail to alert him if she phoned. When he called her back, Hyten later said, she told him that if she had had a gun, "it would already be done" and that Hyten would "have to live with this and think about this at your funeral."

Spletstoser has denied that her messages were suicide threats, stating that they were "clearly attention-grabbing" and reflected "poor word choice" - and were simply "my passive-aggressive way of saying: you did this, and how could you do this?" - referring to the alleged sexual assault.

Spletstoser added that she felt Hyten and his subordinates tried to paint her as mentally unstable to "destroy" her credibility before she could accuse Hyten of assault.

Hyten's defenders, including some senators, have said that Spletstoser previously incurred a temporary brain injury and suffered from minor post-traumatic stress disorder.

Spletstoser said those were combat-incurred ailments from over a decade ago. Three days before her termination, according to the inspector general's report, Karbler agreed that Spletstoser had "no evidence of any mental" health issues, and though Omaha police took her to a hospital for a psychiatric evaluation the night she was fired, the report also indicates that staff dismissed her hours later.

Army officials declined to say why Spletstoser was allowed to take her current job at the Defense Threat Reduction Agency at Fort Belvoir in Virginia.

The service’s chief of public affairs, Brig. Gen. Amy Hannah, said that as a matter of policy, the Army does not publicly discuss which Army personnel are considered for positions on the Army senior staff.